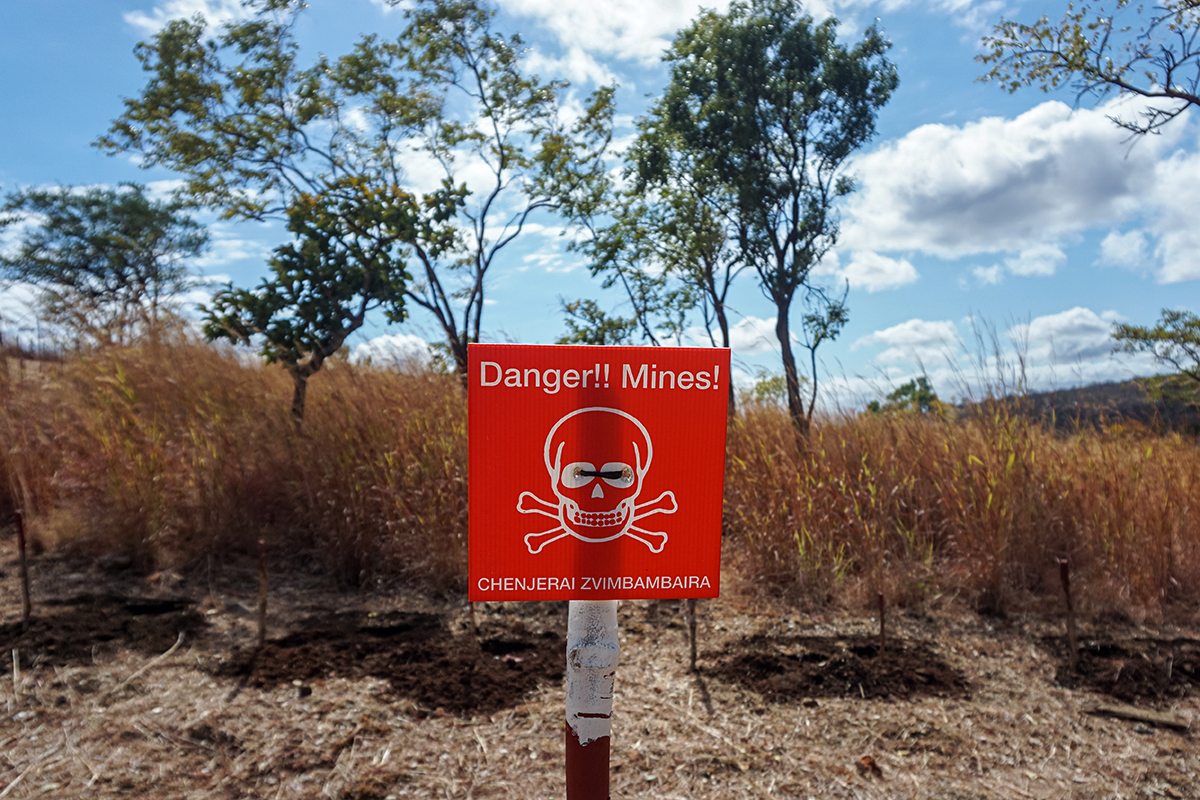 RUSHINGA, ZIMBABWE — In this rural area near the border with Mozambique, paths are clearly marked to indicate where active land mines are likely buried.

Patrick Mupesa lives between two minefields. He says he’s lost two cows, worth up to $300 each. 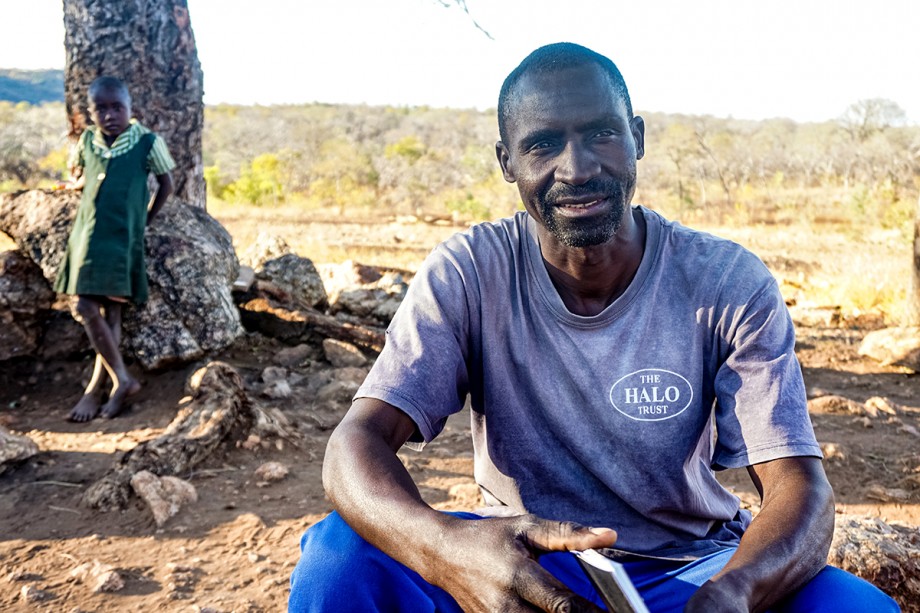 Patrick Mupesa sits near his home in Rushinga, Zimbabwe, while his daughter leans against a tree in the background. This area of Zimbabwe is littered with land mines that threaten people and animals. Mupesa, who wears a shirt from The HALO Trust, a demining organization, says the mines have killed two of his cows.

Thousands of land mines – no one knows for sure how many – are still buried in this part of Zimbabwe. The Rhodesian government placed the land mines throughout the northern and eastern border area between 1976 and 1979 in an attempt to stop nationalist fighters from seeking training and supplies in Mozambique and Zambia.

For nearly 40 years, since gaining independence from the colonial Rhodesian government, Zimbabwe has sought to demine those areas, but nearly 62 million square meters (nearly 24 square miles) still need to be cleared, according to Clearing the Mines 2018, a report published by Mine Action Review.

The country’s land-mine contamination level is considered “heavy” by Mine Action Review, meaning that more than 20 square kilometers (7.7 square miles) of land contain mines. Zimbabwe shares that designation with Angola, Ethiopia, Yemen and more than a dozen other countries. (Afghanistan, Bosnia and Herzegovina, Cambodia and Iraq are the only countries with the higher ranking of “massive,” connoting more than 100 square kilometers (38.6 square miles) of mine contamination.) 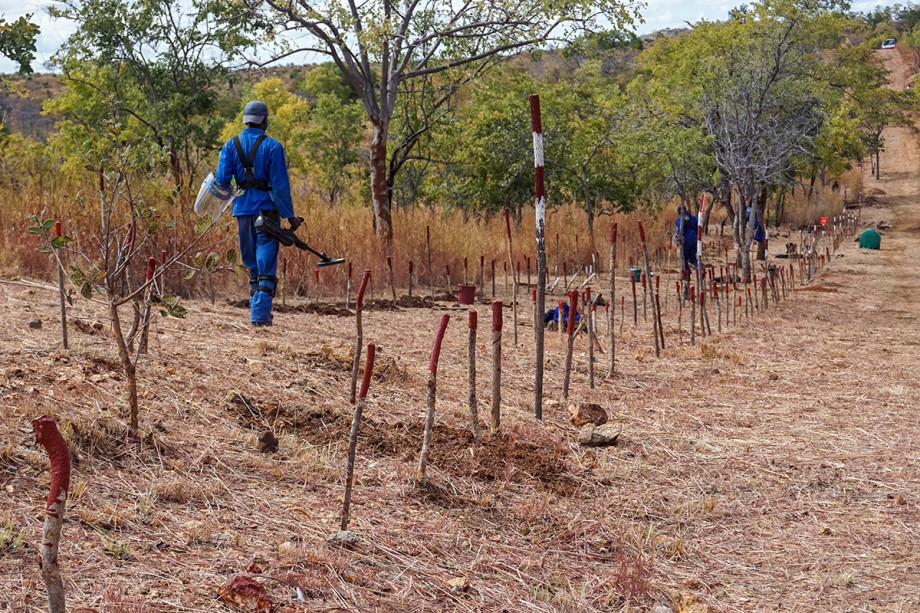 A worker with the HALO Trust, a demining organization operating in Zimbabwe since 2013, carries out demining activities in the Rushinga area. Zimbabwe is considered to have a “heavy” mine contamination level, according to Mine Action Review.

Some progress has been made. According to Zimbabwe’s 2018 Mine Action Strategy, Zimbabwe’s initial contamination totaled about 310 square kilometers (120 square miles), containing about 3 million mines. In 2017 alone, demining efforts resulted in clearing 1.7 square kilometers (0.66 square miles), which contained more than 30,000 mines, according to the Mine Action Review report.

Even so, land mines in Zimbabwe’s northeastern region affect about 75,000 people in 87 communities, according to a survey by The HALO Trust, a demining organization that has worked in the country since 2013. The organization notes that Zimbabwe is among the most highly mined countries in the world.

“Livestock deaths are high, depending on where you live, and it’s a lot of money that people lose when their cattle die,” says Tom Dibb, a program manager for The HALO Trust.

With a crumbling economy and widespread poverty, the notion of moving to avoid mines is unthinkable for many Zimbabweans. In fertile agricultural areas like this one, access to fields where a family can grow food is critical to survival.

Mupesa, the farmer who lost two cows to land mines, grows maize, sorghum and other crops in areas that were cleared of mines beginning in 2013. But life is still difficult: A key water source is located about 4 kilometers (1.5 miles) from his home, beyond a minefield.

“If the minefields are cleared, it could take a few minutes to get to the water source,” Mupesa says. 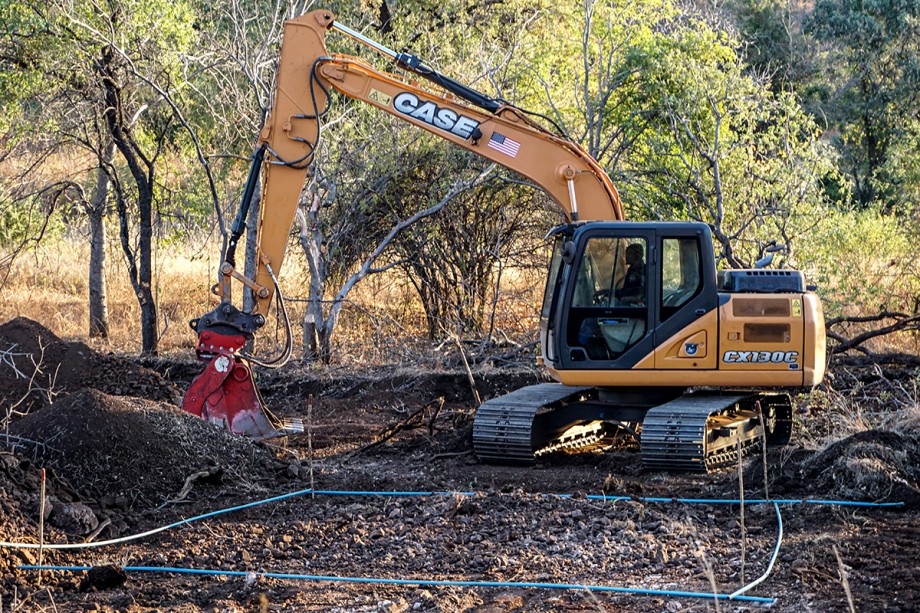 Big machines are used throughout northeastern Zimbabwe to remove land mines. The mines were laid in the late 1970s, when the Rhodesian government sought to push back independence fighters.

Makotore, the army public relations director, says two people died because of the land mines in 2016, but efforts to educate locals about the dangers of land mines have helped ensure that no more deaths have occurred.

“A 2025 Zimbabwe free of mines is possible,” he says, referring to an international campaign, led by The HALO Trust and the Mines Advisory Group, to eliminate land mines across the globe by that year.

Until then, residents in northeastern Zimbabwe say they’re not able to complete simple tasks, such as fetching water, without worrying whether a land mine stands in their path.

Simon Tinoza, 57, has lived here since long before the mines were laid. His son lost a leg four years ago, he says, after stepping on a land mine. He now has an artificial leg, Tinoza says.

Maxwell Nowedza, a farmer, says his field stands just meters from a minefield.

“We are always afraid to be close to land mines, but there is nothing I can do because that is where I found a field to plough,” he says. 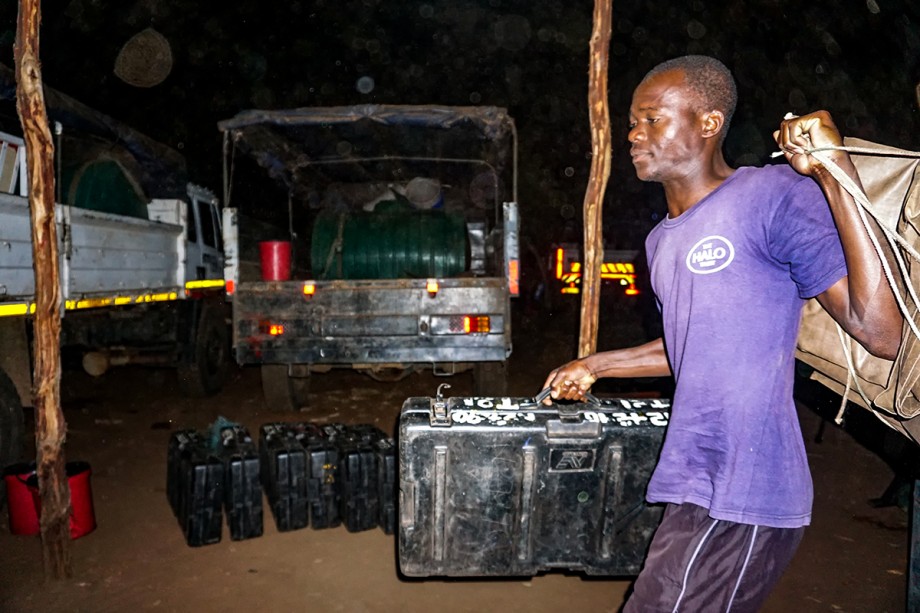 A worker for The HALO Trust, a demining operation, loads equipment to locate and remove land mines in northeastern Zimbabwe.

Shupikai Gavhiyawo says she moved to the area with her family about a decade ago because it was the only place they thought they might be able to secure some land. Once here, they learned to be selective about where they gather firewood, to avoid land mines.

“You have to always monitor your children,” Gavhiyawo says. “I escort them to school and wait for them at a middle point when they are coming back, with the fear that they might land themselves in a minefield.”