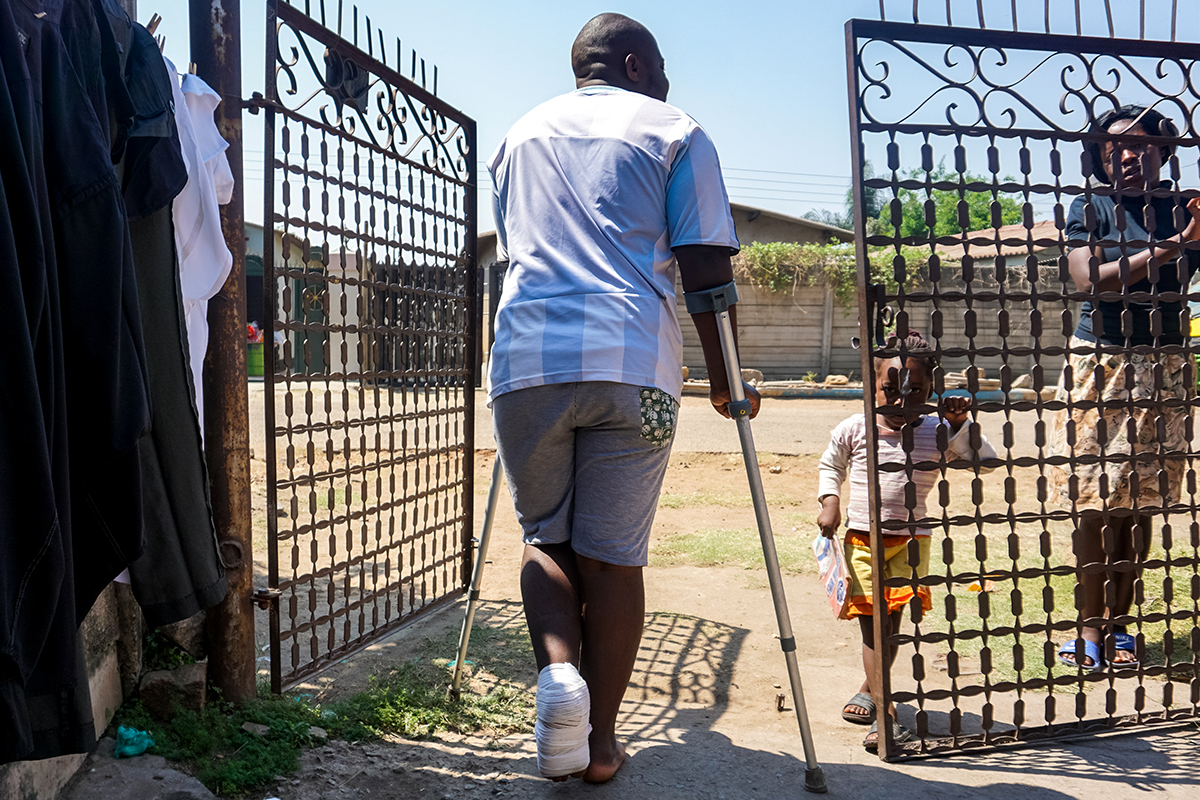 HARARE, ZIMBABWE — After the results of this country’s presidential election were announced just after the July 30 vote, supporters of the MDC Alliance, the main opposition party, flooded the streets to protest what they believed were falsified ballot counts.

Suspicious Ziyambi remembers that. She also remembers her 13-year-old son running toward her. Then came the last thing that she remembers: Her son saying that her husband was dead.

Ziyambi fainted. When she woke, friends and relatives surrounded her. Her first thought: “Who will take care of my children?”

Ziyambi’s husband, Ishmael Kumire, was a street vendor and the family’s sole breadwinner. There is no formal account of how he died, but people who knew him say he was shot in the back by Zimbabwean military forces when the protest broke out near his stand, where he sold fruit and ready-made sadza, a staple food here.

People who saw him on the street took Kumire to the hospital, Ziyambi says, but he died on the way.

“He always used to say I should not go to work, because he provided everything,” Ziyambi says. “Now, my life is difficult.”

It has now been nearly four months since President Emmerson Mnangagwa claimed victory in that election and formalized his presidency, which began about a year ago when his political bloc pushed former President Robert Mugabe from office through a military intervention.

Mugabe frequently used the military during his 37 years in power to stamp out even hints or rumors of opposition efforts. There will likely never be a full accounting of Mugabe’s violence, but human rights organizations, including Amnesty International and Human Rights Watch, tracked his widespread abuse of power.

Mnangagwa promised that he would be different, but crackdowns began not long after the polls closed on July 30. At least six people died in the violence, according to accounts from widespread news reports, local civil society groups and human rights organizations.

Representatives of Zimbabwe’s military, which is accused of meting out violence against MDC Alliance supporters and causing those deaths, did not respond to requests for an interview.

Now, as local news reports have turned to Zimbabwe’s roller-coaster economy, Kumire and the others who died in post-election violence are fading from public memory.

He always used to say l should not go to work, because he provided everything. Now, my life is difficult.Suspicious Ziyambi, whose husband was killed in violence just after Zimbabwe’s July 30 election

This was far from the first time that elections in Zimbabwe turned violent. Sitabile Dewa, a programs manager at Heal Zimbabwe Trust, a peace-building and conflict transformation organization, notes that there were hundreds of cases of human rights violations in past elections.

“The cases were mainly assault, forced attendance to political gatherings, intimidation and harassment, forced displacements and arson,” she says.

Thousands of such incidents took place across the country in 2008, when opposition candidate Morgan Tsvangirai galvanized a huge portion of the country. Thousands of people were subject to public beatings, torture and mutilation by pro-Mugabe groups, according to Human Rights Watch and many other human rights organizations.

Dewa says that Mnangagwa’s government fell into the same pattern when it delayed the announcement of election results.

“In the future, the [Zimbabwe Electoral Commission] must be more professional in their conduct and execute their duties in a timely, nonpartisan manner,” she says. “This helps in restoring confidence and integrity in the electoral body.”

When he was inaugurated, Mnangagwa said that a commission would investigate post-election violence, including the deaths of those six people. The commission has been established, but Amnesty International notes that it’s not clear whether the commissioners are impartial.

“The incident must never be repeated ever again in modern Zimbabwe,” Dewa says. “And it is our wish that the army officials who gunned down innocent, unarmed civilians be brought before the courts of law and allow justice to take its course.”

There’s no tally of the number of people who were injured in the days following the July elections, but local people say the count is high.

Malvern, who asked that his full name not be used because he fears for his life, says he was shot in the leg by government soldiers. He’d been in line at a bank to withdraw $50, the maximum amount his bank could give him that day. Zimbabwe’s banks are notoriously low on cash, which leads to hours-long lines at ATMs and bank windows.

“I boarded a kombi, and soldiers came out of nowhere,” Malvern says, referring to a public transit bus. “I could hear gunshots as the kombi was moving. The soldiers were aiming at the kombi.”

Malvern says he didn’t see anyone in the bus do anything to incite violence, but then he felt a sharp pain in his leg.

The incident must never be repeated ever again in modern Zimbabwe.Sitabile Dewa, a programs manager at Heal Zimbabwe Trust

“When the kombi came to a complete stop, everyone, including the driver, ran away, leaving me alone in the kombi,” he says. “l had to find a taxi to ferry me to the hospital.”

Malvern is a professional driver, but he hasn’t returned to work. He had surgery to get the bullet removed, he says, but the wound caused permanent damage.

It’s not clear why soldiers might have fired at a public bus. The government declined requests for information regarding that incident and the violence in general. Global Press Journal reporters who were in Harare during the days after the election saw people who said they were running from soldiers who were firing weapons. The GPJ reporters ran, too, and saw cars being burned.

Kumire, Ziyambi’s husband, was packing up his wares on that day to leave town to escape the violence, says Elijah Jonga, Ziyambi’s uncle.

“I later heard that he was lying on the road injured, but I could not go to where he was because of the shooting,” Jonga says.

Ziyambi says she received $1,000 from the government’s civic protection department to help with funeral expenses. That’s a standard benefit for families whose members die in national disasters. Global Press Journal spoke with one other person who received this benefit because a family member was among the six people who died after the election, but it’s not clear whether anyone else received a payment. That second person declined to be named in this story.

That money is not nearly enough, Ziyambi says. A life has been lost, and there are four children who are now without their father.

Ziyambi says she wants to continue Kumire’s vending business, but she’s struggled to get it running.

When vendors set up stands in central Harare, she says, the police chase them away.