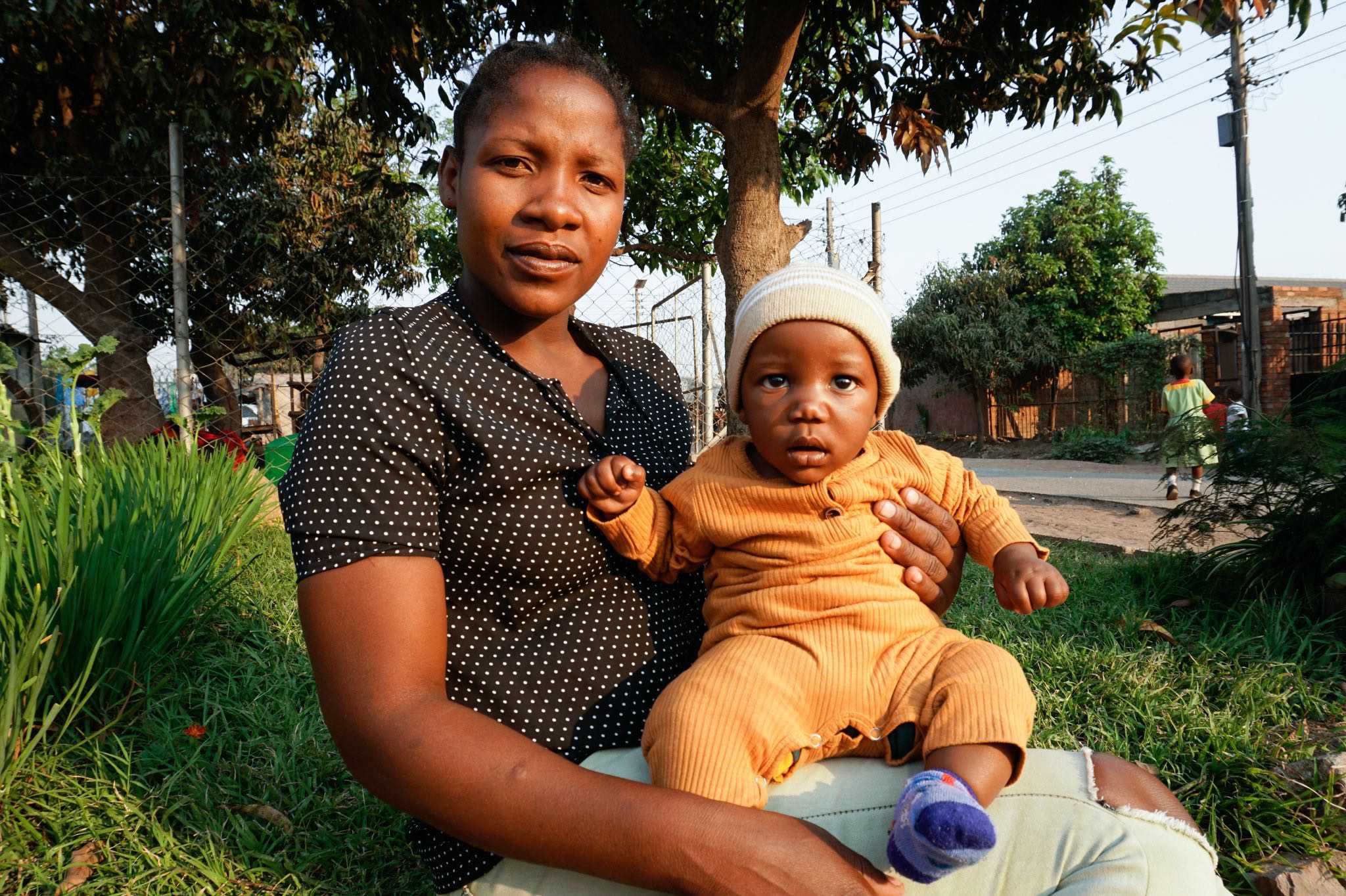 HARARE, ZIMBABWE — Her contractions peaked, and the screams got louder. Yet, no one at the government clinic in Harare, where she was admitted to give birth, came to check on her. For over six hours, Letwin Siyampongo lay on the bed, hoping a nurse or a doctor would attend to her. The moment Siyampongo felt immense pressure, and knew the baby was coming out, she screamed for help again. Again, no one came. And just then, her son slipped out — falling right on the bare floor of the clinic. The baby lay in a pool of blood, crying, and Siyampongo stood there helpless, not knowing what else to do except call for help.

“I was relieved that [at least] he was alive,” she says. The baby’s head and one eye were injured. After the birth, the nurses came in and wrapped the baby in towels. As Siyampongo squirmed in pain, she says, they shouted at her for giving birth in their absence and left. It was only when her mother-in-law came during visiting hours the next morning that the baby was dressed, and Siyampongo ate. The same morning, she went home. “I was better off at my home than the clinic,” she says.

Siyampongo isn’t the only woman in the country who says she has experienced disrespect, negligence and abuse while seeking maternity services, but she is among the few who decided to go to court to seek justice and accountability from the public health system — a sector that has fallen apart in recent years following years of economic and political instability.

Research conducted in 2021 by social scientists Adelaide Mufandaedza and Manase Chiweshe on one Harare hospital found that women seeking maternal health care experience all forms of discrimination, and some have normalized this as part of childbirth. “Class and power are at the root of understanding how poor women often experience disrespectful and demeaning experiences in maternal care,” the study says. The researchers argue that this situation is worsened by the lack of knowledge around women’s health rights and the lack of accountability from health professionals — a gap that organizations such as the Harare-based Women and Law in Southern African Research and Education Trust (WLSA) are trying to fill.

The organization’s senior legal officer, Hilda Mahumucha, says even though duty bearers are obligated to provide quality health services, people here do not know that “duty bearers can be held accountable.”

Siyampongo, represented by WLSA, is suing the Harare City Council, which owns the clinic, among others. Her ask is clear: She wants the clinic to acknowledge that what staff did to her was wrong and assure her through proper medical examinations, the cost of which is too high for her to bear, that her son has not incurred any permanent damage.

But Siyampongo’s hope in the judicial system solidified after she learned about Valerie Chibaya, a mother who lost her baby in June 2020 because of medical negligence at a local hospital and took her case to court with the help of legal aid provided by WLSA. The High Court found the hospital negligent and ordered it to pay Chibaya a compensation of 900,000 Zimbabwean dollars ($1,413). The compensation, the order said, was for “her pain and suffering.” 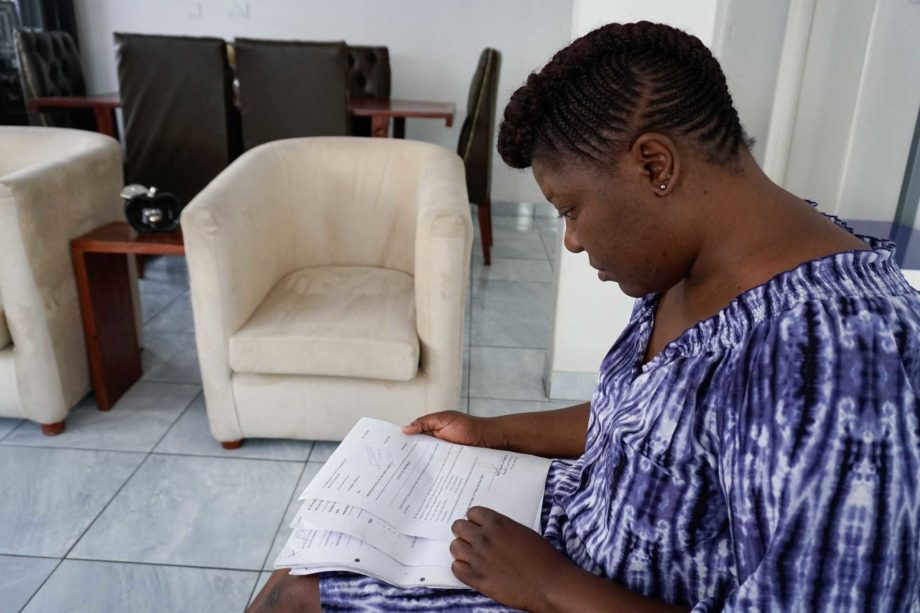 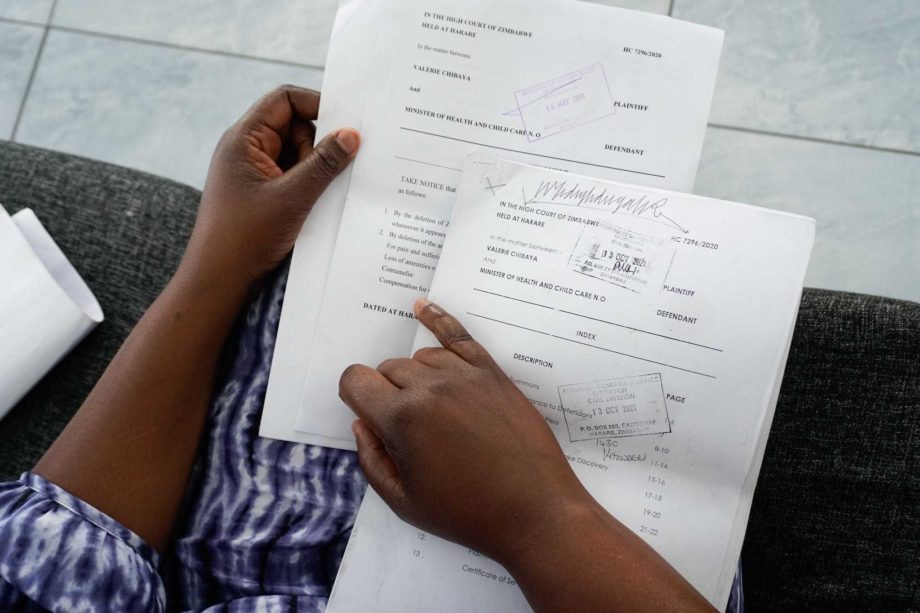 Valerie Chibaya shows the court documents that detail her case, at her home in Harare.

After Chibaya’s “groundbreaking case,” Mahumucha says, more women like Siyampongo have sought legal help to fight these injustices in court. In 2019, the organization started a project to assist women in accessing their reproductive health rights and ensure they get access to basic health services, delivery and health rights. This was after realizing that the organization was capacitating women in areas besides maternal health, and this was a sector that needed attention.

Rueben Akili, director of the Combined Harare Residents Association, an organization that represents the welfare of residents in Harare, says the issue of maternity services here is so dire that in some clinics, women give birth under candlelight or using the cellphone torch, due to lack of alternative power supply. (Power outages are one of the main challenges facing the health sector.) After some births, staff sutured vaginal tears without administering anesthesia.

On paper, the government’s policy is to provide free health services for pregnant and lactating mothers, children younger than 5 and adults ages 60 and older. But as Enock Dongo, president of the Zimbabwe Nurses Association, says, “There are no resources to use. Nurses end up asking clients to buy baby delivery packs themselves. … Health budgets are not being released on time. The lack of resources is more visible in the maternity health more than any other sector. … The most vulnerable people are the patients, followed by the nurses who are the custodians.”

During the 1980s and 1990s, Zimbabwe’s health sector was among the best in sub-Saharan Africa. Although the coronavirus pandemic has worsened access to health care, the years of economic instability are what reduced the capacity of Zimbabwe’s health care system. According to the latest data from the World Health Organization, there are about two doctors per 10,000 people in Zimbabwe. The WHO’s recommendation is one doctor per 1,000 people. The working conditions and salaries are such that a report from the United Kingdom’s Parliament found that in 2021, Zimbabwe ranked 11th among origin countries for immigrant health care workers and fifth for nurses. Over time, the exodus of health care workers and the country’s economic challenges have contributed to a rapid decline in maternal, newborn and child health indicators.

When asked what the government is doing to improve maternal health care, Donald Mujiri, the spokesperson in the Ministry of Health and Child Care, says the country’s maternal mortality has declined, an assertion supported by the Multiple Cluster Indicator Survey of 2019. “Government and partners have established the Results-Based Financing (RBF) model [a program that rewards health facilities based on their performance] to improve access to health care services. Besides, training for midwives and specialist doctors has been scaled up.” Mujiri did not respond to specific queries about the lack of available resources and enough funding.

Until the country resolves the systemic issues within the health care sector, women like Chibaya and Siyampongo say courts are the only way they can seek recourse and justice.

Chibaya, who lost her baby after trying to have a second child for over a decade, says the court ruling brought some closure, “but it’s not enough, it will never bring back my boy.”

Siyampongo is lucky her son survived. Like Chibaya, she says she hopes justice will soon come her way.