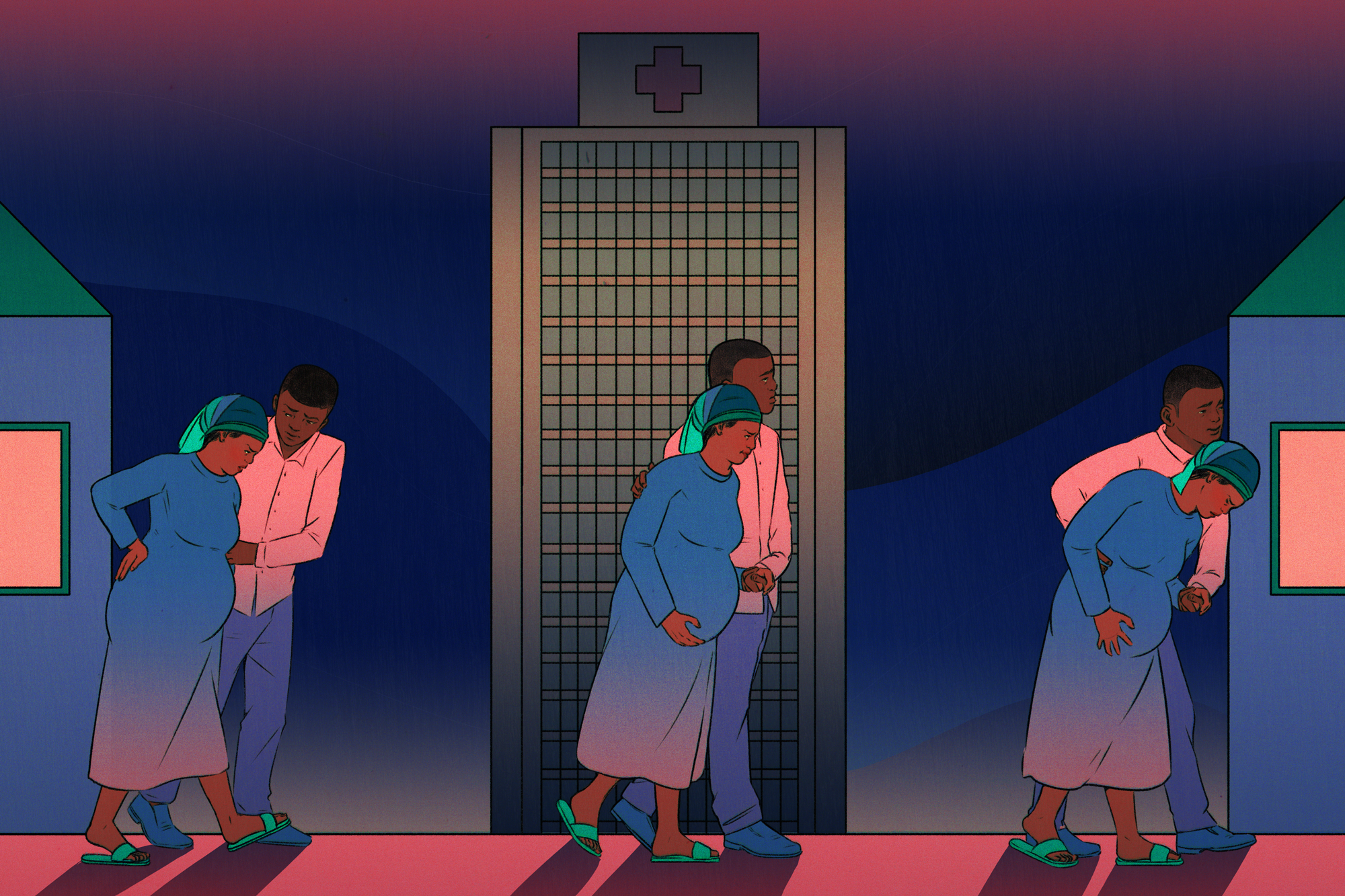 Months earlier, she had registered her pregnancy at Chitungwiza Central Hospital, as pregnant women here typically do. Registration and a fee of 120 Zimbabwean dollars (ZWL) ($6.90) covers eight prenatal visits, tests, screenings and care for the child up to age 5.

At the crack of dawn one morning last November, Mhombera says her husband escorted her to the hospital as her labor pains worsened. But when they arrived, it was closed. The couple went to Edith Opperman Maternity Hospital in Mbare, some 24 kilometers (15 miles) away. It was closed too.

Mhombera says they walked aimlessly that morning, not sure where to go or what to do. “We met a lady who advised us that we could seek help from an old woman who was helping women give birth at her home,” she says.

The woman was not a doctor or even a midwife, but with no other options, Mhombera and her husband went to the stranger’s home, where they found themselves in a room with 20 other pregnant women who needed medical services.

Mhombera’s baby girl, Anotida, was born in that room later that day.

The health sector is in chaos throughout Zimbabwe, one of the most palpable symptoms of the country’s economic freefall. Doctors recently went on strike for almost five months. Hundreds were fired. Now, nurses work two shifts a week instead of six. Pay remains low. As inflation spikes, medication is unavailable at many hospitals and increasingly expensive at pharmacies.

The new coronavirus threatens to further burden a thinned-out health care system, which already struggles to provide adequate services to pregnant women. Zimbabwe has reported eight cases of COVID-19, the disease caused by the virus, as of March 28, according to the Johns Hopkins University & Medicine Coronavirus Resource Center. One person has died.

But maternity wards still lack enough staff and resources. Doctors and advocates here say women are continuing to deliver in unsafe environments, where they are prone to infections and have no options if complications arise. There are other consequences, too. Women who aren’t able to deliver in hospitals say they also have trouble accessing birth certificates for their children.

During the 1980s and 1990s, Zimbabwe’s health sector was among the best in sub-Saharan Africa. Over the years, the country’s onslaught of economic challenges has increasingly undermined health care and contributed to a rapid decline in maternal, newborn and child health indicators.

Doctors decided to go on strike last September, as they faced poor pay and a lack of medicine, equipment and staff. Dr. Paulinus Sikosana, chair of the Health Service Board, says the government fired about 400 entry- and mid-level doctors in November. Some have been rehired, but health services remain weak.

The number of women who gave birth at home or with the help of untrained professionals during that time is unknown, he says.

Martha, a midwife who works at a local hospital and requested that only her first name be used for fear of retribution, says more women are coming to the hospital with complications after home births. She has treated women who died after home births, she says, or who had conditions such as eclampsia and postpartum psychosis.

She recorded 12 complications at the 500-bed provincial hospital where she works in November, and, she says, 17 more in December. At least 20 were recorded in January before the strike ended.

Even when hospitals reopened, the challenges for pregnant women continued.

“When I got to the hospital in mid-January, it was open and nurses were there,” Stella Matsadi says. “They were claiming to be at work.”

But when she told the nurses she was in labor, they said the beds were full and turned her away.

With no other options and labor progressing, she sought help from Esther Zinyoro, a 73-year-old woman who is not a trained midwife – the same woman who delivered Mhombera’s baby two months before.

“I was told by a prophet at my church that I had the gift to assist women in giving birth,” Zinyoro says, adding, “I do not have any training or medical qualification to do so.”

But when she realized women in labor were turned away from the hospital near her home, she decided to help.

I was told by a prophet at my church that I had the gift to assist women in giving birth. I do not have any training or medical qualification to do so.”Esther Zinyoro, a 73-year-old woman who is not a trained midwife

Between October 2019 and January 2020, she says she delivered more than 375 babies, and she continues to assist those who come to her door. She charges $20 per delivery.

“Sometimes women may have no option. When they need help, they go to anyone who can help them. However, there are consequences, as home environments cannot give quality care,” she says.

Chonzi, the Harare health services director, acknowledges that many pregnant women have been turned away in recent months, especially at night.

During the strikes, he says, some of their busiest clinics and maternity wards weren’t operating, like Edith Opperman Maternity Hospital, where an average of 400 babies are born every month.

“Some women resorted to giving birth in homes and through other private health providers, but this put women in labor and unborn children at a huge risk,” he says. “The issues of incapacitation that were cited by nurses are still rampant. Quality of services is still not the same.”

Even for the women who have delivered babies in recent months, challenges linger. Postnatal care, which is provided for five years when mothers register their pregnancies, is scarce. And those who delivered at home or in the homes of unofficial attendants like Zinyoro face bureaucratic hassles.

Without the “baby card” provided by hospitals, neither Mhombera nor Matsadi have a formal record of birth. So far, neither child has a birth certificate.