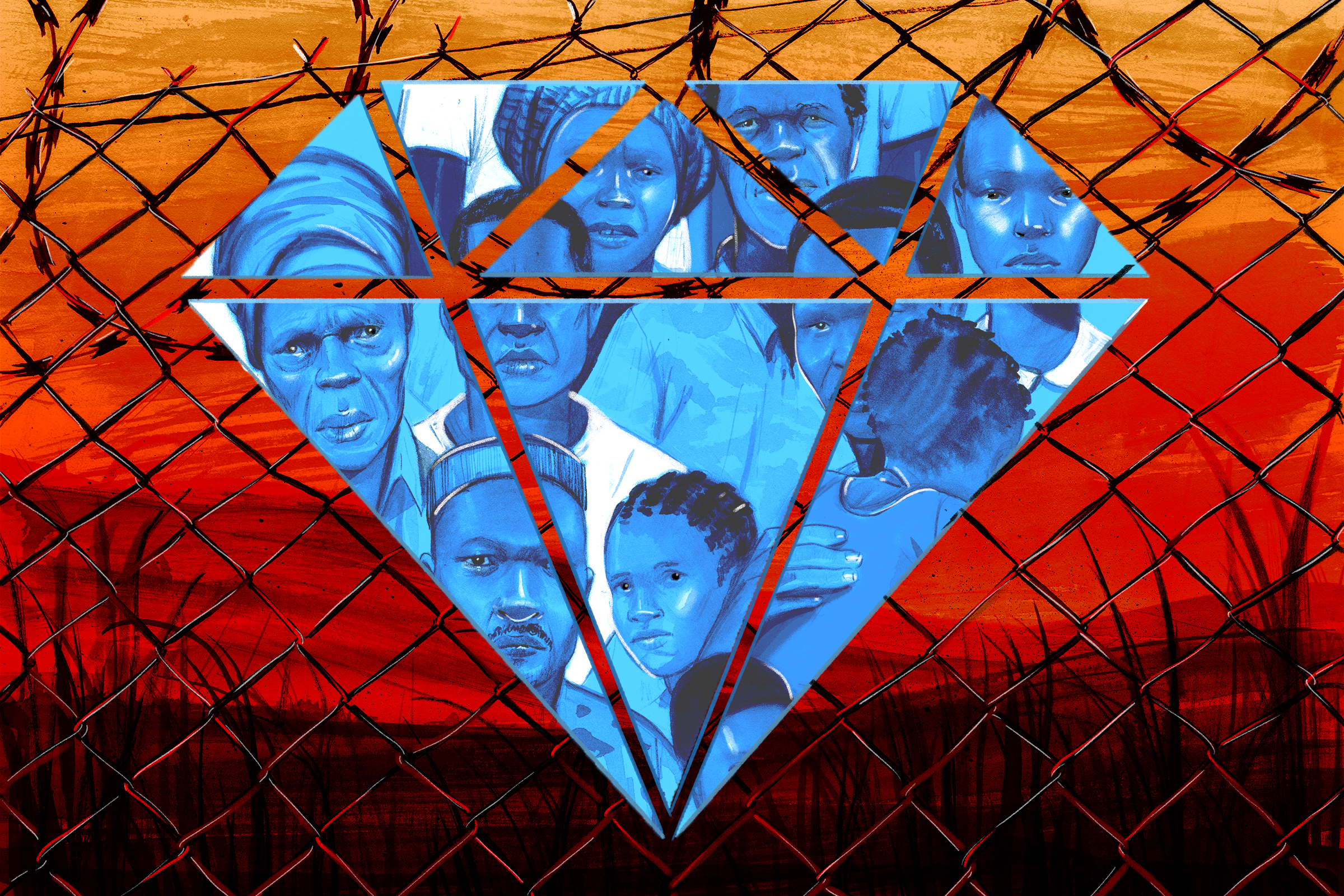 CHIADZWA DIAMOND FIELDS, ZIMBABWE — Police and military officers man a boom gate, which marks the boundary of this diamond mining area. An officer stops each vehicle and asks for identity documents from each passenger. No vehicles get through the gate without a permit and the officer’s approval.

Behind the gate, residents of three dozen villages struggle to forge ordinary lives as authorities strictly monitor their movements. The permit to get into this diamond mining area is free and valid for one month, but it’s not issued nearby. Even those who live here must go to Mutare, a town about 40 miles away, to get it.

In shopping areas, locals gather to listen to the radio and socialize. They’re cautious: They never know when the military will show up and look for evidence that people are illegally mining diamonds.

Thirteen years ago, diamonds were first found here in what was then the largest diamond discovery in recent memory anywhere in the world.

The discovery sparked a diamond rush. The government announced at first that anyone could mine for diamonds. Local people refer to the era as “mazuva ebvupfuwe,” which means “days of plenty” in Shona, the language spoken by a majority of Zimbabweans.

But that quickly gave way to a period now known for human rights abuses. An estimated 300 children were eventually forced to carry ore for 11 hours each day, according to eyewitness reports recorded by Human Rights Watch. Informal diamond miners were pushed out of the area, and those who remained were forced into hard labor in the mines for little or no pay. 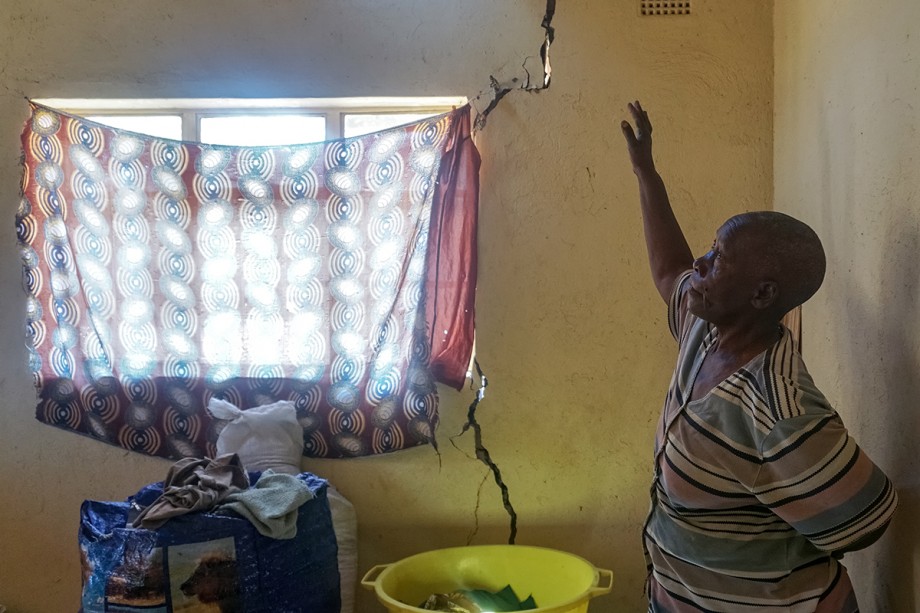 Alice Gama looks at cracks that have developed on the wall of her house in ARDA Transau, an area near Zimbabwe’s Chiadzwa diamond fields. Families were relocated to ARDA Transau to make room for mining activities, but many of them have not been fully compensated for their original properties or relocation costs.

At the same time, Zimbabwe’s diamond exports exploded, totaling more than $2.7 billion since 2010, the year that marked the beginning of a serious industry boom. Little of that money made it to the country’s treasury, however, despite government ownership of at least half of every company licensed to mine the area and their current maneuvering to consolidate all companies under one roof as the Zimbabwe Consolidated Diamond Company.

The government’s partial ownership of all the Chiadzwa-area diamond mining companies created an off-the-books revenue source for its military and intelligence agency. In 2012, the country’s Deputy Minister of Mines and Mining Development testified to parliament that a military company, Zimbabwe Defence Industries, held a 40 percent stake in Anjin Investments, according to a 2017 report from Global Witness. The government recently announced that Anjin Investments will resume mining in Chiadzwa in July, after a three-year hiatus and tense negotiations with the government, according to the Zimbabwe Independent.

This comes alongside an international effort to extend the definition of “conflict diamond” to include diamonds from countries where the military is involved in their mining or trading. Zimbabwe, Angola, Democratic Republic of Congo and Venezuela were mentioned as countries that should be banned – but currently are not – from the international diamond trade, as regulated by the Kimberley Process, a certification scheme aimed to halt the trade in conflict diamonds.

Meanwhile, promises to heal Zimbabwe’s spiraling economy with diamonds remain unfulfilled. Outside investigations of corruption and court battles continue, with displaced residents feeling the brunt of the uncertainty. 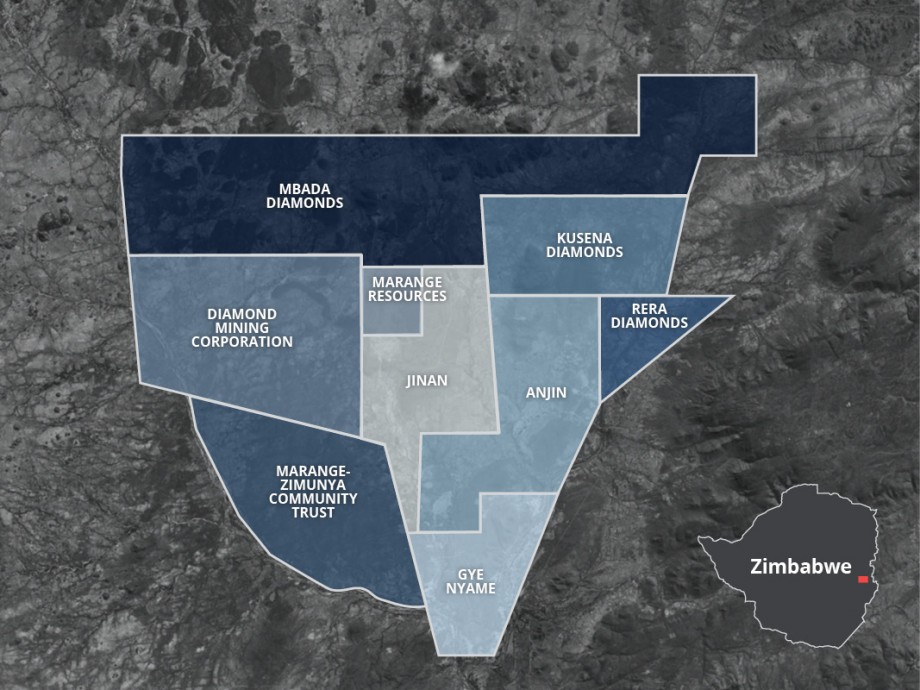 This map of the Marange diamond field in eastern Zimbabwe’s Manicaland province shows the locations of mining concessions as of September 2017. The concessions were granted by the government to nine corporations involved in diamond mining.

Byron Mamvota was born in the diamond mining area. Now 38, he was in his prime when the diamonds were discovered. He mined them himself, he says, but he didn’t make much money.

“I didn’t know the value of the stone,” he says.

When companies came to the area to formalize mining efforts, he couldn’t get a job with any of them and wasn’t able to mine the diamonds himself anymore. Now, he says, everyday movement within the area is problematic, even for people who live there.

“Guards will be harassing us and asking for our identity documents,” he says.

At first, the discovery of diamonds was a boon for locals, says Malvern Mudiwa, chairperson of the Marange Development Trust, which represents people who live in the Marange area. People updated their homes and sent their children to school, he says.

“It was evident that everyone was benefitting,” he adds. 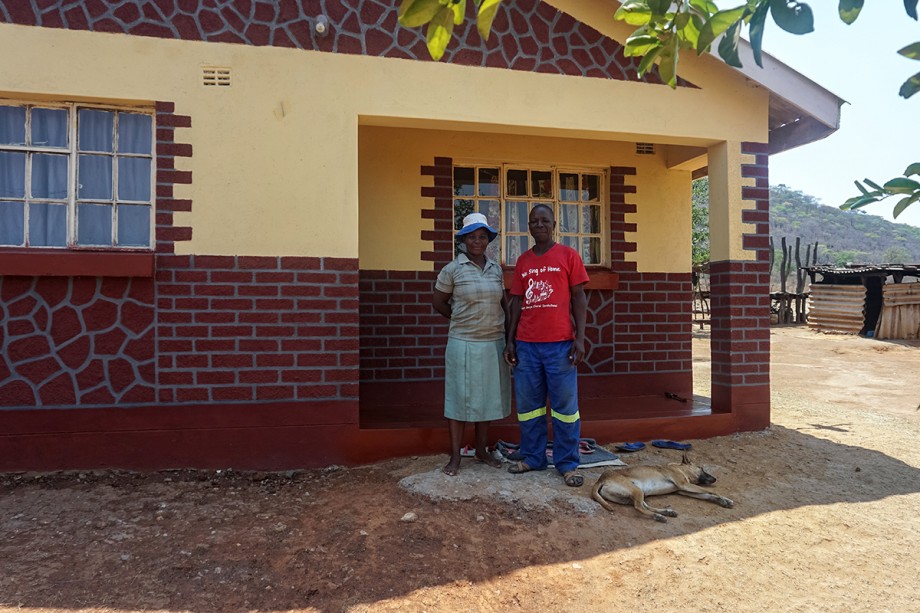 Daniel Manyere stands with his wife outside their home in ARDA Transau.

But ultimately, Mudiwa says, once the mining companies arrived, everything changed.

“We do not have the freedom as similar to others who do not live in Marange,” he says.

The area is tightly controlled. When livestock wander beyond a fence, farmers often cannot follow. The army raids local shopping areas, asking everyone for identity documents to ensure that no one is trespassing.

Shandurai Matambo, 36, says soldiers came to her house in 2018. They were looking for piles of dirt – evidence that she had illegally mined for diamonds. The soldiers searched her home and found some steel planks. They told Matambo that the planks proved that she’d been mining. One soldier hit her in the head, she says, and she was knocked unconscious.

“From that day, l have developed a headache problem,” Matambo says, adding that she hasn’t received any compensation for the incident.

In 2010, the government began to forcibly relocate families to a 12,000-hectare (29,653-acre) farm known as ARDA Transau. It was expected that, ultimately, all of the area’s more than 4,000 people would be relocated to the farm to make way for mining activity. Around 900 people moved before money for those relocations ran out. 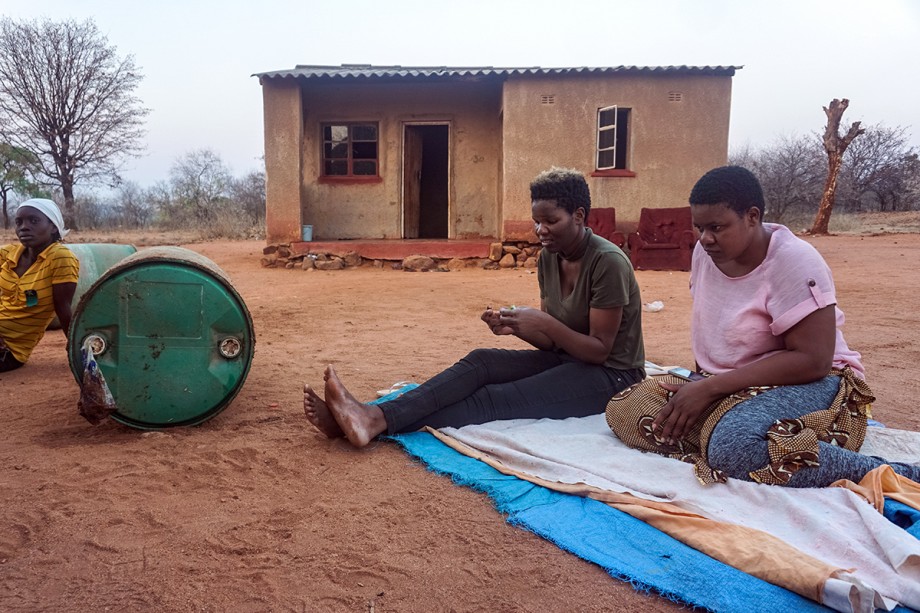 Glitter Matambo and Attempt Matambo, who are sisters, sit outside their house near the Chiadzwa diamond mining area. Ever since the area was reserved for diamond mining activities in 2006, their movements in the area have been restricted.

Daniel Manyere, 53, was part of the first group of people that moved to ARDA Transau. He says each household was promised $5,000 as a relocation allowance, but instead, they only received $1,000.

Those were verbal promises, he says. Nothing was written down. Promised amenities never materialized either.

Once in the new area, Manyere says, people found that more than half of the homes were not well-made. Most began to crack.

Manyere says he worked for Mbada Diamonds beginning in December 2009 but left when the company was ordered to cease operations in February 2016. He was a plant operator.

He worries about the future. People in the community no longer have access to their family graveyards. They don’t have any land to give their sons.

“If my son marries, he will have no option but to build on the small space that we have here,” Manyere says.

Gamuchirai Masiyiwa and Linda Mujuru, both GPJ, translated some interviews from Shona.