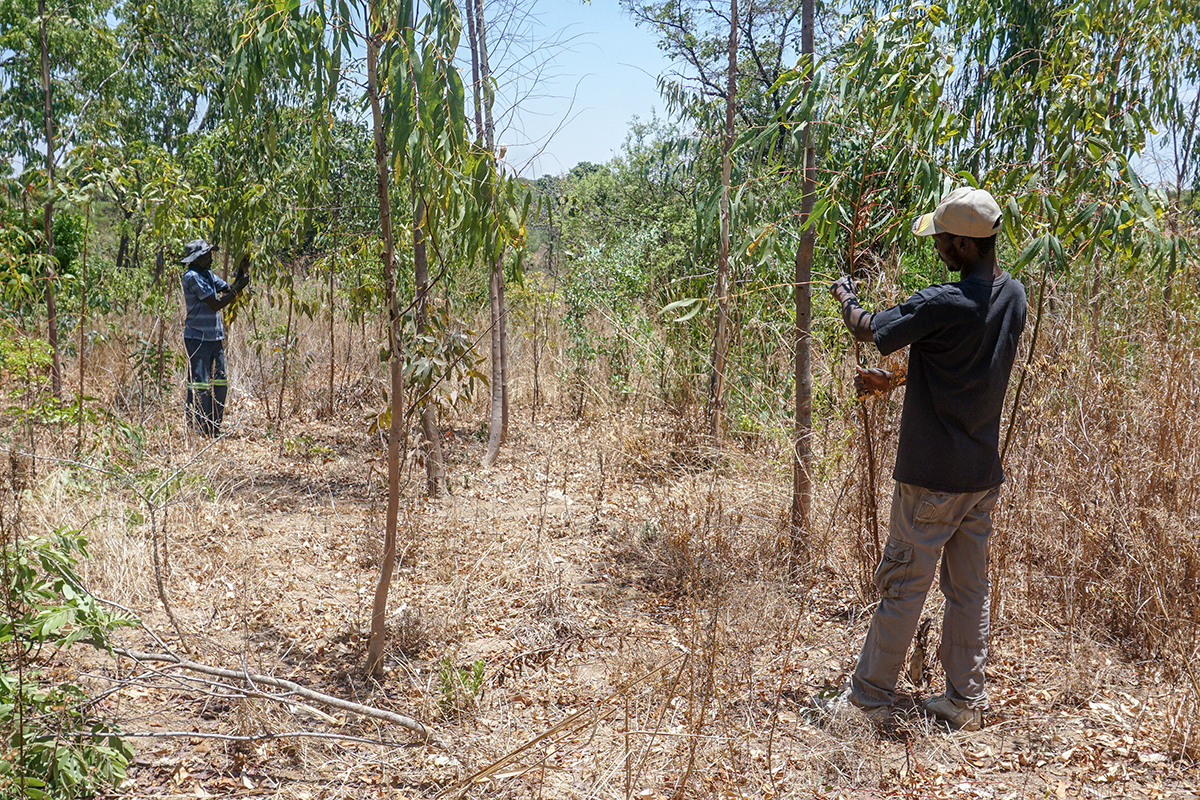 The 29-year-old started farming tobacco with his father in 2000. Then, he often cut down trees, which the pair used to cure tobacco.

“We spent about six years cutting down trees in our farm without replanting any trees,” Tafireyi says.

That habit proved destructive in ways the family didn’t intend. They realized that their deforestation was slowly eliminating their firewood, which is key for many families in Zimbabwe, who cook over wood-fed flames.

Eucalypti, also known as gum trees, are used around the world for reforestation, in part because they grow fast. Farmers can expect to use them within five years, instead of waiting 20 years, which is standard for many other trees. They’re used to restore vegetation throughout Zimbabwe’s tobacco-growing region, which stretches across the northern half of the country. 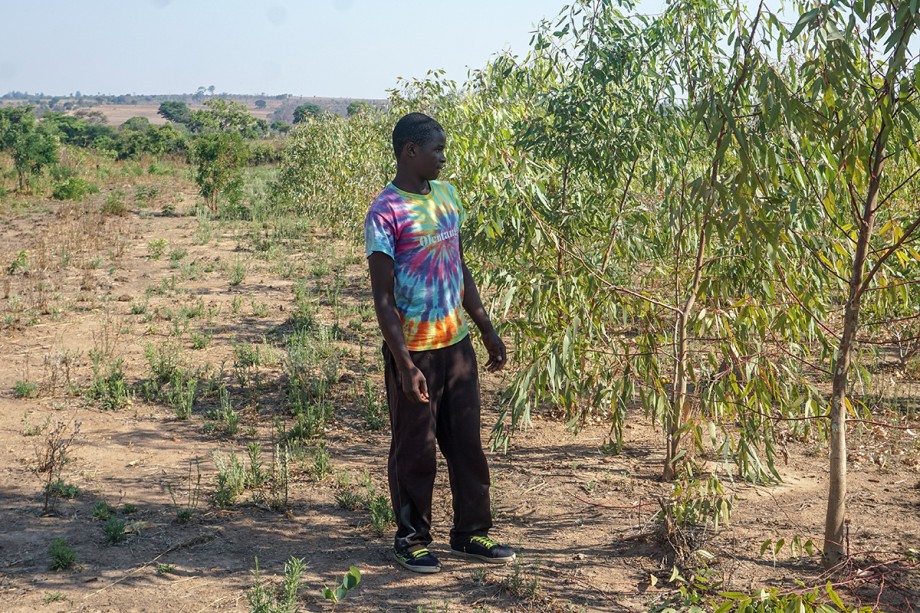 Nyasha Magwenzi surveys gum trees, which are grown to fuel the fires that cure tobacco.

Tobacco is a key cash crop in Zimbabwe, where farmers say the plant was cultivated long before Europeans arrived. Production in the country peaked in the late 1990s, when an estimated 50 percent of all agriculture workers were involved in some way with tobacco crops, according to the Zimbabwe Tobacco Association. Today, 80 percent of the country’s tobacco farmers are small-scale producers, and the sector produces 180 million kilograms (397 million pounds) of tobacco annually, according to the association’s data.

Zimbabwe accounts for 3.5 percent of the global raw tobacco trade – an industry worth $10.9 billion total, according to the Observatory of Economic Complexity, a data tool maintained by the MIT Media Lab. The country ranks third for raw tobacco trade in Africa, trailing Malawi and Tanzania.

There were nearly 100,000 registered tobacco growers in Zimbabwe in 2017, up from about 81,800 growers the previous year, according to data released by the Tobacco Industry and Marketing Board. The largest increase in growers between 2016 and 2017 – 28 percent – were on what Zimbabwe calls A1 farms. Those farms were created under the country’s controversial Fast Track Land Reform program, which evicted the white owners of many large commercial farms in the 2000s and, in theory, gave that arable land to black Zimbabweans. That program led to serious food shortages as many farms were placed in the hands of people unable to manage them.

But tobacco farmers have been reported in the Zimbabwe media as netting substantial profits, despite a national economic crisis that has most citizens struggling to meet basic needs.

The Tobacco Atlas, a review of the tobacco trade sponsored by health policy organizations, including the American Cancer Society, examined environmental degradation due to tobacco farming in Malawi and Tanzania, among other countries. (It did not publish specific degradation data for Zimbabwe.) Across the board, Zimbabwean tobacco farmers “underestimate their costs and overestimate their returns,” according to the atlas. Plus, the atlas notes, tobacco farming is increasingly shifting toward countries with economic and political vulnerabilities. Zimbabwe has an unstable economy and a government that is consistently accused by human rights organizations and other governments of fomenting human rights abuses.

In Zimbabwe, tobacco is often flue-cured, a process that involves heating and drying the leaves. Some sophisticated producers use electricity to cure the tobacco, but in Zimbabwe, the process requires large amounts of firewood.

By early 2000, an estimated 20 percent of Zimbabwe’s deforestation was related to tobacco farming, according to one 2016 study.

According to Global Forest Watch, which tracks deforestation around the world, Zimbabwe lost roughly 13 percent of its tree cover between 2000 and 2017.

“Our markets are concerned that tobacco is produced in a sustainable manner,” says Isheunesu Moyo, the public relations manager of the Tobacco Industry and Marketing Board.

The board is exploring solar energy as a potential solution, as well as ethanol, he says.

For now, Moyo says, the board is giving gum tree seedlings to tobacco farmers who have space to produce their own woodlots. The target was to establish 20,000 hectares per year for reforestation, so that in five years tobacco farmers would have enough wood from their own lots to cure the tobacco they produce, he adds. 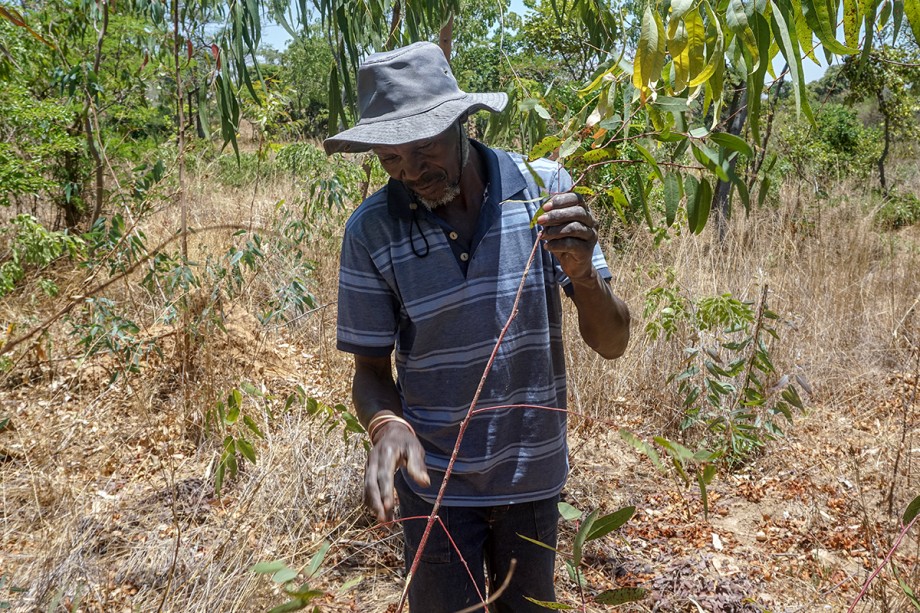 Calisto Tafireyi, shown here, is among the estimated 100,000 registered tobacco farmers in Zimbabwe. It’s a major cash crop here, but curing the tobacco has led to serious environmental problems.

The government has taken steps to curb deforestation, too. A 2012 statutory instrument enacted a requirement that tobacco farmers establish their own woodlots or obtain firewood from a licensed trader.

In 2015, an afforestation fee was levied against tobacco farmers, but Moyo says that money hasn’t been used as it was intended.

The fee is 0.75 percent of each farmer’s total revenue, but disbursement of that money to the afforestation effort has been hampered by administrative problems, Moyo says.

“From what was collected, we have a portion of it, which we are awaiting directives of how to utilize it,” he says.

Rodney Ambrose, CEO of the Zimbabwe Tobacco Association, says the government has collected close to $25 million from farmers, but it hasn’t started a single reforestation program.

Other resources are missing, too, he says.

“Forestation also requires large tracts of lands and these are simply not being availed, as lands are making way for various farming, commercial and mining activities,” Ambrose says.

Reforestation isn’t keeping pace with the need for trees, he says.

In the meantime, farmers are doing what they can to grow their own firewood.

Tafireyi says he has 300 gum trees, all of which are 4 years old. He lost about 3,000 trees when they were 6 months old last year, in a fire that Tafireyi says was likely caused by hunters, smokers or beekeepers. Now, he says, he and many other farmers put up fireguards to protect the trees.

Tafireyi says he plans to use the trees he has left when they’re 6 years old. Until then, he’s using other energy sources, including coal provided by the Zimbabwe Leaf

Tobacco company, which contracts with many farmers to buy tobacco. That company, too, gives out gum tree seedlings.

It’s simple: “We need to plant more trees,” he says.