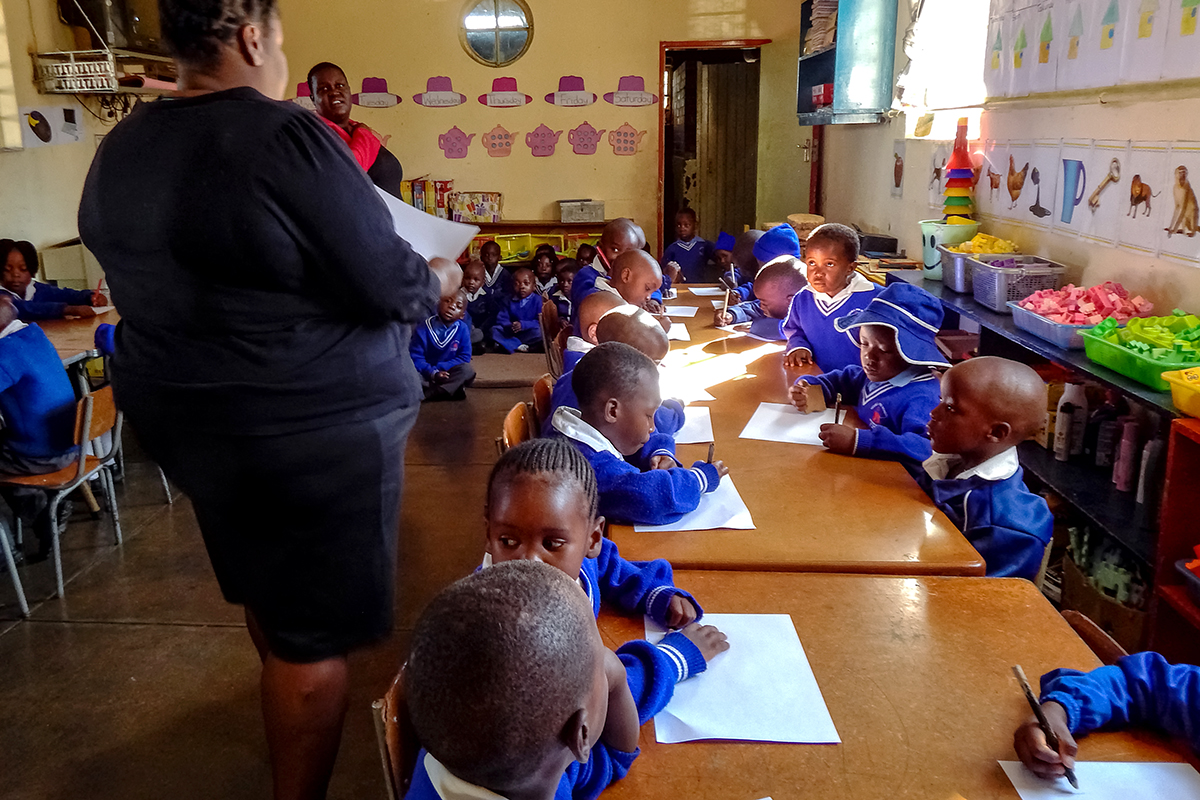 BULAWAYO, ZIMBABWE – It’s winter in Zimbabwe, and the second term of the school calendar has just begun. A group of schoolchildren rush into their classroom, against the strong, chilly May winds. Huddled in their small seats, they begin to recite nursery rhymes aloud.

“These little ones are always ready to learn,” says Nontokozo Mdlongwa, an early childhood development (ECD) teacher at this local preschool in Bulawayo, Zimbabwe’s second-largest city.

Some advocates have described this early-learning system as a key part of the government’s plan to improve children’s learning outcomes in a country once known for its robust education sector. For parents, ECD classes in public schools are affordable. But others argue that ECD is underfunded, which has led to a lack of adequate infrastructure.

The quality of Zimbabwe’s education sector improved following the country’s independence in 1980. Though the sector has declined in the years since, the government still plays a key role in shaping education policy and funding the sector. Spending in 2016 for primary and secondary education made up approximately 20.3 percent of Zimbabwe’s total budget that year, compared to the sub-Saharan Africa average of 16.5 percent, according to UNICEF data.

ECD expenditures also increased, from $2 million in 2015 to $144 million in 2016. With a significant amount of the country’s teaching staff being redirected to the ECD sector that year, teacher salaries drove the stark increase in funding. In 2017, the ECD allocation rose again, to $214.44 million. But access to ECD is still limited because of shortages of trained teachers and learning spaces.

ECD was formally incorporated into Zimbabwe’s primary education system in 2004. The government requires public primary schools, locally known as formal schools, to offer a minimum of two ECD classes – ECD A and ECD B – to children ages 3 to 5. But schools were slow to set up these classes, because they lacked both trained teaching staff and adequate infrastructure.

In 2010, however, the government reported that 95 percent of the country’s primary schools had successfully adopted the policy, with children in rural Zimbabwe benefitting the most from the new early-learning system. For many families who couldn’t afford to send their children to preschools, which are often privately owned and expensive, ECD facilities were the alternative.

This is still a prevailing dynamic in ECD, says Obert Masaraure, president of the Amalgamated Rural Teachers Union of Zimbabwe, but challenges persist. Some public primary schools still do not have classrooms for ECD learners. The lack of ECD classrooms accounts for about 46 percent of the country’s classroom deficit, according to UNICEF.

“The acute shortage of infrastructure forces teachers to conduct lessons under trees, and such lessons are abandoned when the weather conditions are not favorable,” Masaraure says. In some cases, young students living in rural parts of the country have to walk long distances to attend classes at ECD facilities outside their communities, he adds.

Government underfunding is only making ECD education less accessible for those already suffering from limited access to it, some say. According to the Nhaka Foundation, a local education nonprofit, a large portion of ECD funds goes to staff salaries, leaving less than 3 percent for infrastructure and the professional development of staff members.

But parents say there are benefits to the learning system.

“The introduction of ECD at formal schools has saved me a lot of money, which I could have spent at a preschool,” says Jestina Mwale, a parent with two children enrolled in ECD classes at a public school in an urban area. In public schools, parents are required to pay for tuition and uniforms, Mwale says. Parents often incur additional costs sending their children to preschools, because they have to pay for breakfast and lunch, on top of paying for tuition and uniforms, she adds.

Some preschools charge up to $250 per academic term, while term tuition in some public schools is $100, says Mdlongwa, the ECD teacher. Fees are even cheaper in unregistered preschools across the country, often found in people’s homes. But parents often opt for registered preschools or primary schools.

“The numbers at our preschool have greatly reduced since ECD was formally introduced in formal schools,” she says. “We still have parents who still prefer to bring their children to preschools, but it is only a few who can afford [to do so]”.

The ECD policy is also benefitting students, parents say. Margaret Mlilo, a mother of three, says her 9-year-old daughter did not have the chance to attend ECD classes before entering first grade at the age of 7. This made it difficult for her daughter to learn, she says.

But Mlilo says that her son, now enrolled in an ECD A class, is a quick learner.

“My 4-year-old son who attends ECD at a nearby school is enjoying it and will not have difficulties as he moves forward,” says the mother, who lives in Ntepe, a rural village in the town of Gwanda. “ECD, especially in rural areas, has helped children develop faster.”