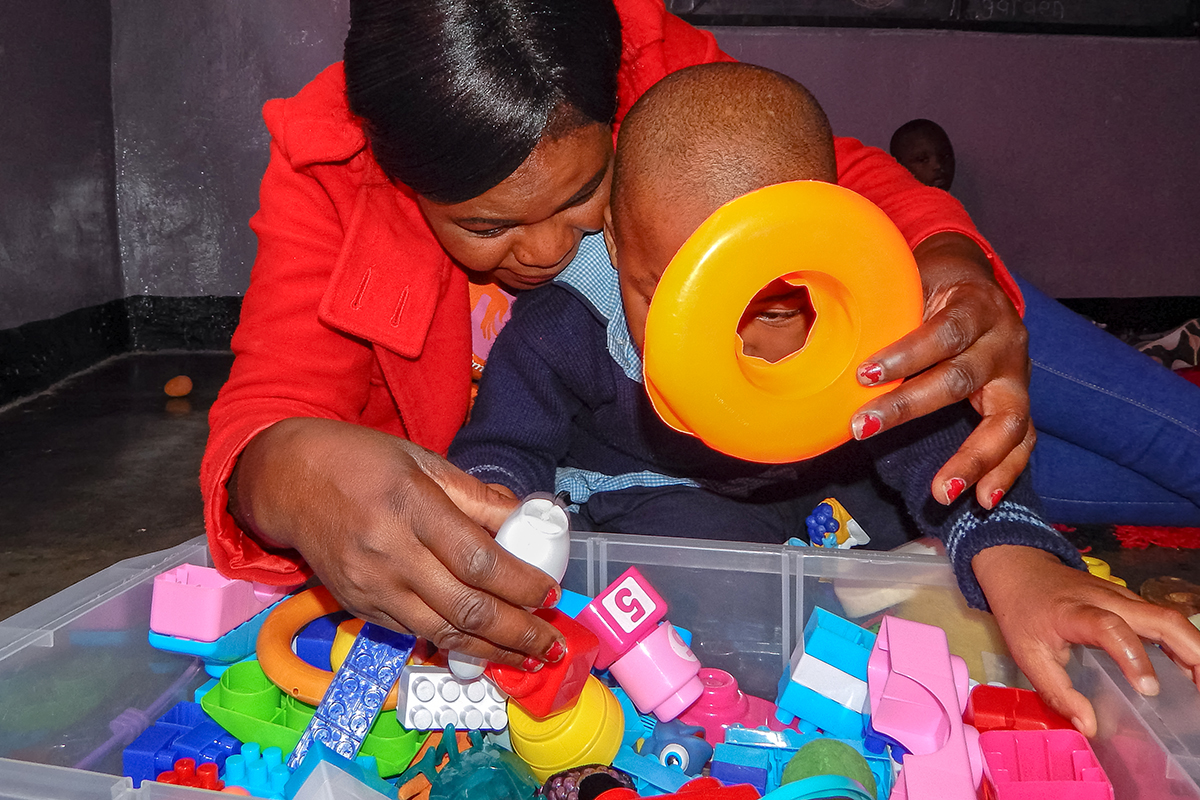 LUSAKA, ZAMBIA – In a boardroom at Lusaka’s University Teaching Hospital, Sylvia Kabaghe passes around a handful of booklets to the participants of the workshop she’s conducting. They are all parents of children with Autism Spectrum Disorder, and they have gathered to learn more about how to support their children.

The workshop, which uses a curriculum called Project ImPACT (Improving Parents as Communication Teachers), is designed to show parents how they can help their children improve their communication skills.

“We want to ensure that parents and guardians equally become the best teachers for these children, before we can teach them at school,” Kabaghe says.

One of the attendees, Summer Kasana, flips through the pages of the booklet and smiles.

“I did not know how to teach my child, [but] now I will be the number one teacher before anyone else,” she says. 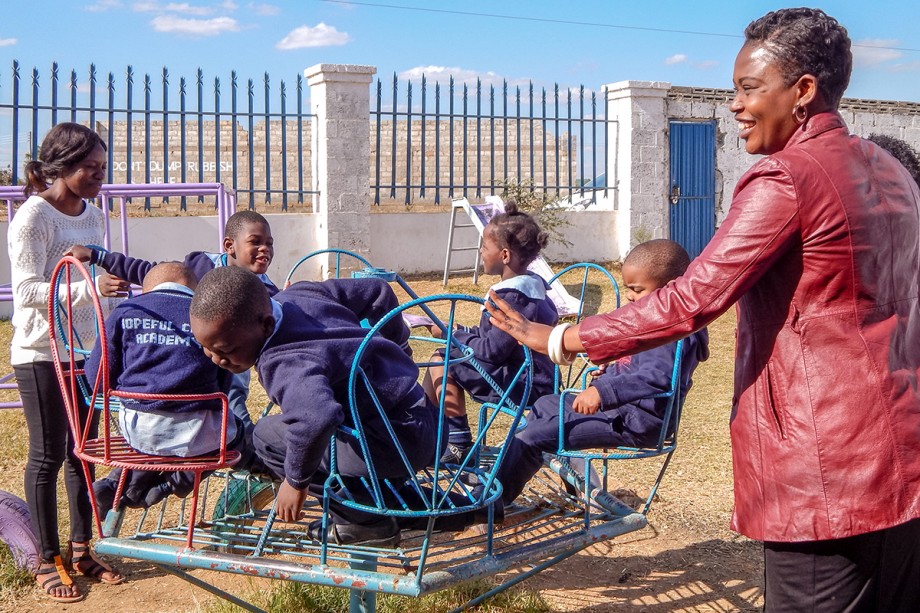 Mutelo Matokwani (right), a director at Proactive WAYS Academy, plays with children on the swings during break time. The school’s fees, lower than other private schools, make it more accessible for parents of children with ASD.

Workshops like Project ImPACT are rare in Africa, where studies indicate there are few dedicated services for children with ASD. Those that are available can be very expensive, leaving them out of reach for most parents of affected children.

There is no data for how many children in Zambia have ASD, but Kabaghe, a lecturer in Educational Psychology at the University of Zambia, says the university’s teaching hospital attends to around 50 children per week who have the condition.

Finding appropriate schools for Zambian children with ASD can be a challenge. Most often, they are placed with other children who have special needs, which can make development very difficult. Some children with ASD can be largely silent or slow to speak, Kabaghe says, but that does not mean they are slow to learn. Using a curriculum meant for children who have learning difficulties is therefore often not appropriate to teach them.

For years, Kasana’s son, Wanna, barely spent a year at any single school, hopping from institution to institution. She tried a government special school, but Wanna’s issues with speech development meant that he could not adapt to the environment there either, she says. So she took him out of school all together.

“After six years of keeping the child at home, I decided to take him to a private school that had some form of special education in line with autism. But it was expensive,” she says.

Now, the opening of a new school that specializes in teaching children with autism has given her hope that she can educate Wanna without getting into financial trouble.

“It is the passion that I have for these kids that drew me and some friends to come up with this school that supports children with autism,” Kabaghe says.

“The teachers here have done special education, but on top of that they are trained specifically in autism under Project ImPACT.”

The school currently has 20 pupils enrolled, who are looked after by four teachers.

Daisy Muwowo, a teacher at Proactive WAYS Academy, says play is an integral part of teaching children with autism.

“We have had children that could not utter a word. But through engaging them in play, they feel special and sooner than later you begin to hear words from them,” she says. “It’s very exciting to see them develop.”

Raphael Kaoma says Proactive WAYS Academy has made a real difference for his eight-year-old daughter.

“I knew my daughter could not fit into any ordinary school and I was at pains to think that my daughter would never step [into a] class, but this school gives me hope,” he says.

While Proactive WAYS Academy is helping some families, Anita Njekwa, a domestic worker, says she cannot afford the fees. Though lower than most private schools, they are still beyond the means of many in Zambia. She says she has no option but to take her 14-year-old daughter out of school all together.

“My daughter has been rejected at ordinary schools and the special school did not help either,” Njekwa says. “So I just keep her at home.”