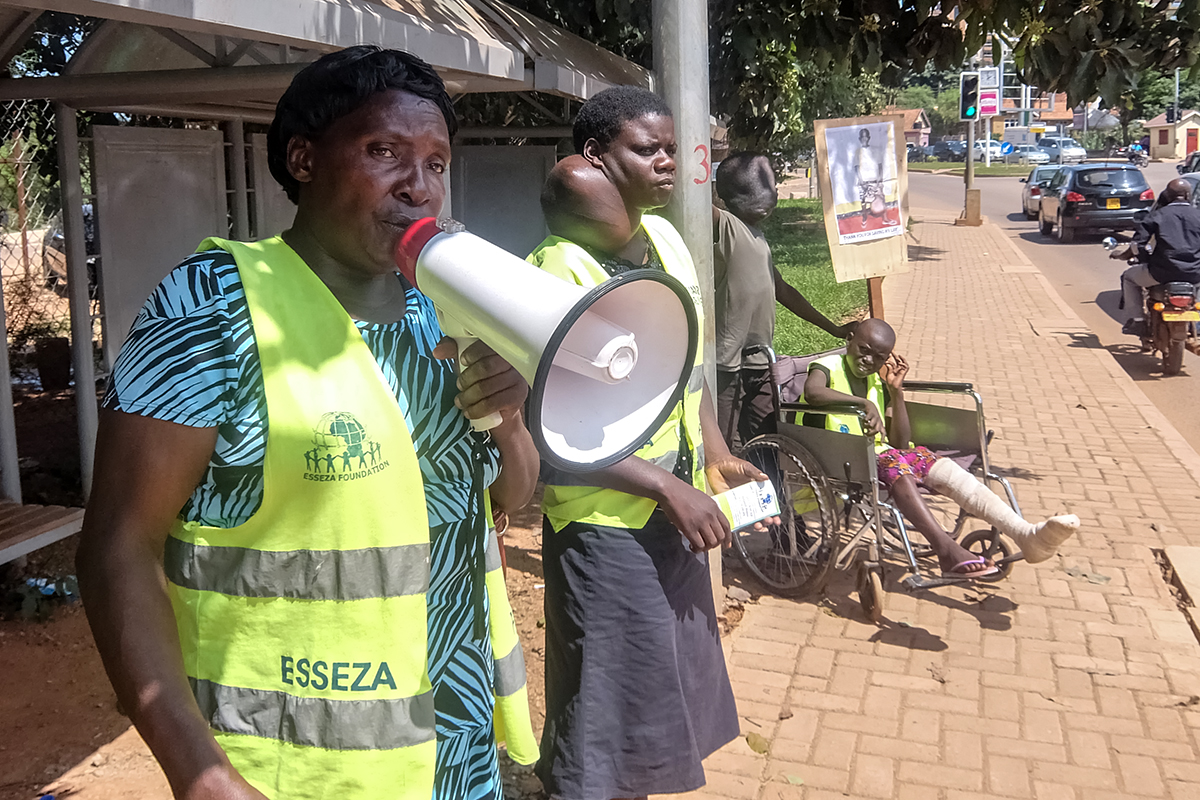 KAMPALA, UGANDA — Even as Harriet K. weaves her car through this capital city’s busy downtown core, her phone consistently alerts her to incoming calls. Her friends are organizing a car wash – a fundraiser for K., who needs 90 million shillings (about $23,900) to travel to India to get treatment for breast cancer at Apollo Hospitals in Bangalore.

K., a literary arts lecturer, has exhausted the treatment options available in Uganda. Her Ugandan oncologist has confirmed that, she says, and told her that her only option now is to go abroad. (K. asked that her full name not be published, because she wants her financial situation to remain private.)

“I should have gone to India right away, but the fee was high,” she says. “Now I must go, or it will be too late.”

Medical tourism, especially to India, is fast becoming a mainstay for Ugandans with serious illnesses. Ugandan doctors and the hospitals are developing relationships with doctors and medical facilities in India and even offer direct referrals for treatment there.

But for many patients in need of advanced medical care, the expense of going abroad is far beyond what they can afford on their own. Fundraisers, including the car wash that K.’s friends planned, are becoming more common, too. 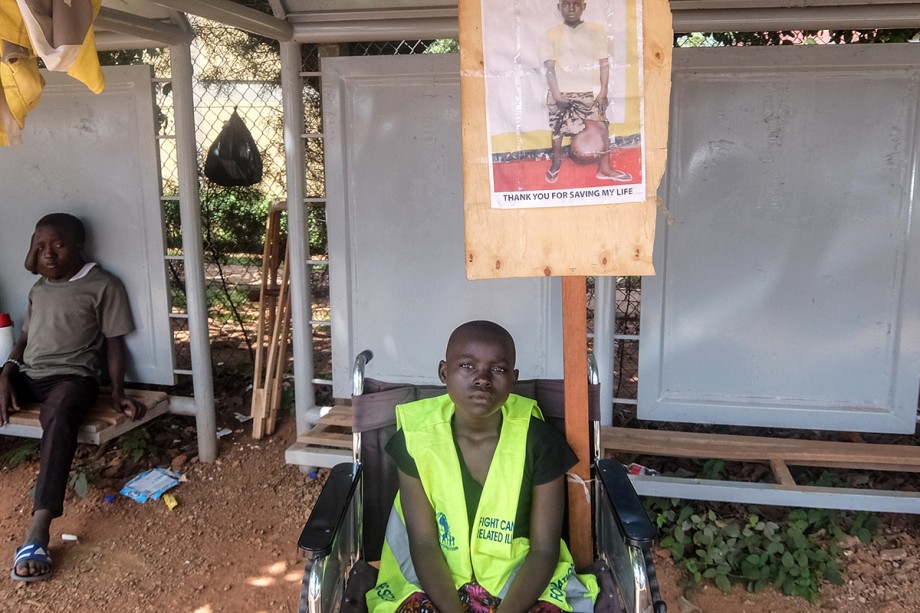 Carol Nionkulu sits in a wheelchair under a poster picturing her before she had surgery to remove a cancerous growth on her leg. Eseza Foundation, an organization that helps children in Uganda travel abroad for medical treatment, assisted her in raising money for her surgery.

The country doesn’t even have a positron emission tomography (PET) machine, which determines whether cancer has spread, says Judith Sheena Kyamutetera, the founder and manager of Magnus Medi Tourism, a company that links patients to medical facilities in India.

Kyamutetera understands the challenge of finding good care in Uganda. She struggled to get the treatment she needed after she was diagnosed with breast cancer and ultimately went to India. She created her company two years ago, after she went into remission. Since then, she’s arranged travel for about 20 patients. Most trips cost approximately $18,000, she says.

The nearest PET scan machine that attracts Ugandans is in South Africa, Kyamutetera says, but the cheapest options for treatment are in India.

There are an estimated 108 PET/CT machines in India, according to data from 2015 – that’s about 0.08 machines per 1 million people.

Referrals to foreign countries are made based on the cost of services and whether there are direct travel connections, among other factors, says Dr. Jackson Amone, the commissioner for Integrated Curative Services in Uganda’s Ministry of Health.

A team of doctors reviews each case to determine whether a referral is required, he says.

“We refer people whom we know will benefit from the treatment abroad,” he says. “No need to make the patient suffer expenses and fatigue when we know their cases will end in death.”

In some cases, the Uganda Medical and Dental Practitioners Council directly refers patients to hospitals in other countries, at a cost of $5.6 million between 2010 and 2015, according to Ugandan government documents.

Mulago Hospital’s medical committee referred 225 patients to facilities in India between July 2014 and February 2018. Most went abroad to receive treatment for cancer, to get kidney transplants or have heart surgery.

We refer people whom we know will benefit from the treatment abroad. No need to make the patient suffer expenses and fatigue when we know their cases will end in death.Dr. Jackson Amone, the commissioner for Integrated Curative Services in Uganda’s Ministry of Health

The government of India has taken steps to ensure that it is on hand to lend expertise at Uganda’s hospitals. In 2009, a telemedicine center was set up at Mulago Hospital in Kampala, which includes an ultrasound machine and other diagnostic tools, according to documents published by the Indian government. That center is connected to 11 hospitals in India.

During the colonial era, when British officials administered both India and Uganda, people from India were brought to Uganda to take key economic roles. Many of them were expelled in 1972 by Idi Amin, Uganda’s brutal dictator, who said his aim was to preserve the nation’s jobs for Ugandans. But by then, many Ugandans had deep connections with Indians. Now, a large number of Ugandans claim Indian ancestry as at least a piece of their heritage.

Today, a basic kidney transplant in India costs about $25,000, Amone says. That’s far beyond the means of an ordinary Ugandan, who might earn $85 per month. There are no facilities in Uganda that offer kidney transplants, he adds.

K., the literary arts professor, says she felt a lump in her right breast in July 2017. She ignored it, thinking that it was breast milk. (Her baby was younger than 18 months old at the time.) But the lump grew in size, and she had it tested. Those tests revealed that the lump was cancerous.

In January, K. went in for a surgery, which cost 9 million shillings (about $2,400). But that procedure didn’t fully remove the cancer. She had a second surgery at a cost of 7 million shillings ($1,860), which removed her entire breast. Still, she says, the cancer was in her body.

Now, she’s collecting money, including from the friends who are holding fundraisers on her behalf, to travel to India for treatment. In the meantime, she’s undergoing chemotherapy, for which she’ll pay 2.5 million shillings (about $660). Doctors in Uganda don’t expect that any treatment she can get in-country will be sufficient.

The disease and chemotherapy treatments are taking a toll on K.

“I am insecure,” K. says. “The pain is growing in leaps and my hair is starting to fall off.” 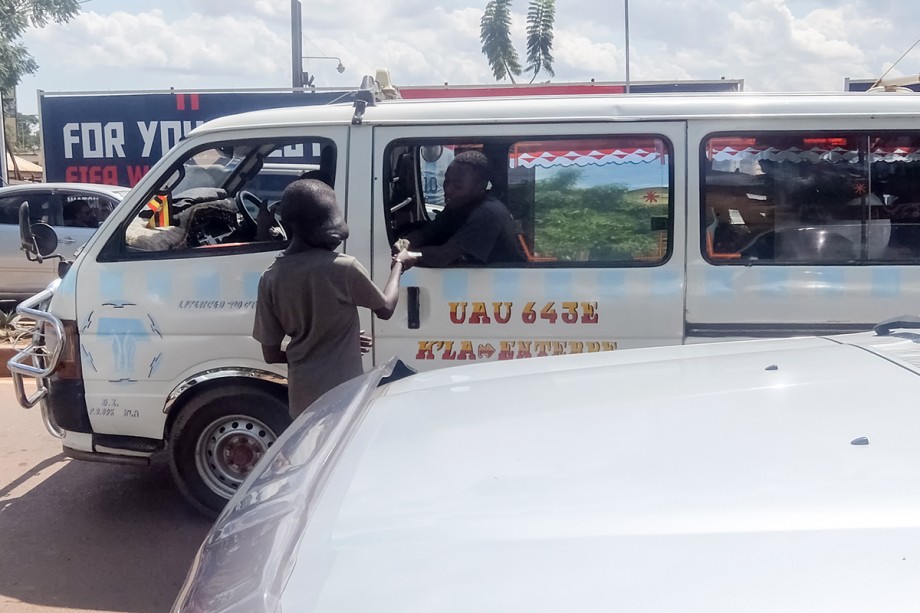 Harriet Anyango, 24, asks a taxi passenger in Kampala, Uganda, for a donation. Anyango, who needs to have a growth on her face and neck removed, works with Eseza Foundation to raise the money for her treatment.

For K. and other Ugandans who can’t afford to travel abroad, fundraisers are unlikely to yield all the money they need.

Ugandan lawmakers are reviewing a proposal for a national insurance plan, which some officials say would help people who need to travel.

“The bill…is believed to help Ugandans in dire medical difficulties to stop running around for handouts and pocket change to move to India,” says Ali Walube, an officer in the Ministry of Health.

Some Ugandans say that money would be better spent on building facilities and installing equipment in Uganda.

“A better-furnished hospital would be ideal,” she says.

Even Opendi, the state minister of health, says that investing in a well-equipped hospital in Uganda would be cheaper than sending everyone who needs treatment to foreign countries.

Meanwhile, the most vulnerably ill Ugandans are still looking for donations. Anne Katuregye is the founder of Eseza Foundation, which helps children and young adults who have cancer. Katuregye stations children with the disease at busy traffic lights around Kampala, where they ask money.

“We help some children,” she says, adding that she accepts that others won’t get the treatment they need.