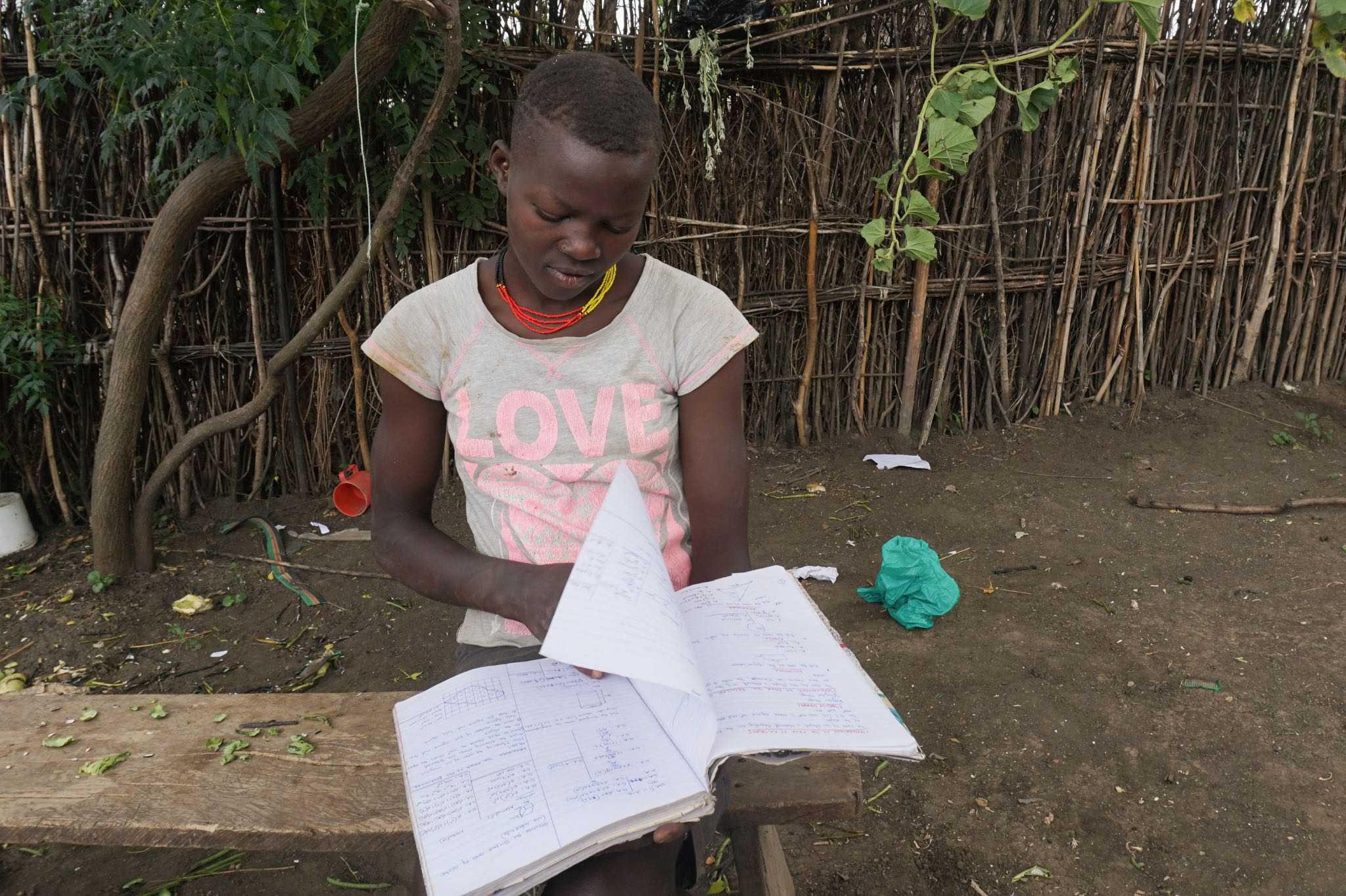 MOROTO, UGANDA — Before June 2022, Clementina Aleper was a schoolgirl with dreams of becoming a nurse. Now, even just looking at the path she once walked daily to and from school scares her. The 14-year-old stopped going to school after one of her neighbors was killed by suspected Karamojong cattle rustlers.

“We used to hear about rustlers, but this killing was too close to home,” Clementina says, visibly shaken. “I feared men would capture me, rape or even kill me, so I asked my mother if I could stay home, and she agreed.”

Sylvia Namilo, 13, was attending a community school that was part of Alternative Basic Education for Karamoja, a special program that places learning centers closer to the homesteads of children in pastoral communities. Sylvia, who wants to be a teacher, walked every day to attend the learning center 3 kilometers (about 2 miles) away, but she now spends most of her time at home playing.

“When my school opened from COVID shutdown, I studied one term of classes then stopped when the cattle raids began,” she says, as she takes a break from jumping rope with friends. “We don’t go to my school because it is not safe at all.”

Resurgence of insecurity in Karamoja has left thousands of children out of school and is threatening to undo recent progress in one of the worst-performing regions in education in Uganda. Children who were excited to return to school after long shutdowns due to the coronavirus pandemic have found themselves at home yet again because of the return of violence, 15 years after a government disarmament led to relative peace.

The violence has affected all rural schools; only 15% of rural pupils have been able to go to school, says David Koriang, chairman of Local Council 5 in the region’s Moroto district. In certain schools, there are only two teachers. “The rest have run away due to insecurity,” Koriang says. 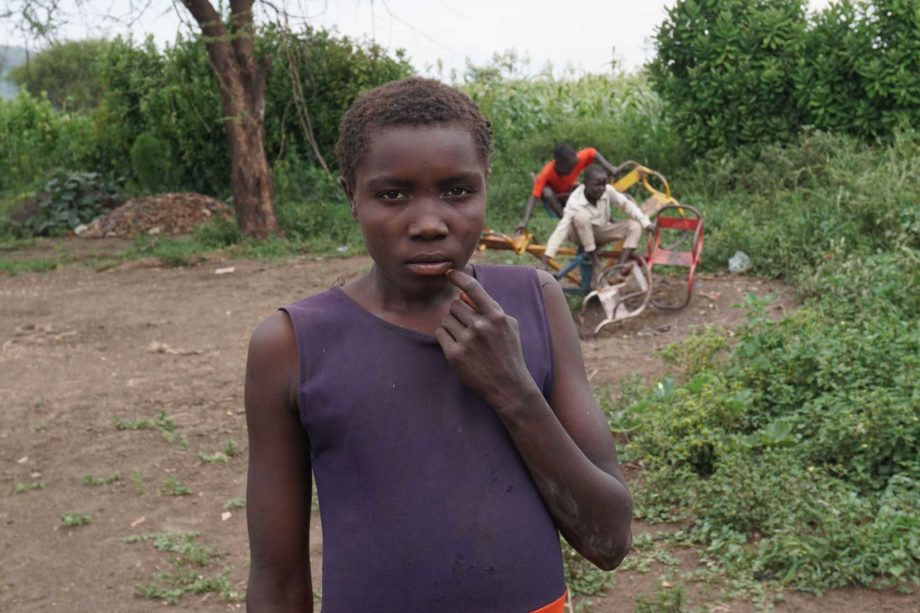 Sylvia Namilo, 13, an aspiring teacher, stands where she once had classes at her community school in Moroto district, Uganda. Sylvia says that because her school is not fenced, it is not safe to study there because of increased violence.

Nachele Primary School in Moroto district had 439 students at the beginning of the school term in May 2022, but only about 200 children completed the term in August, head teacher Sagal John Baptist says.

Partly due to insecurity in the region, only 5.5% of children in Karamoja complete primary education, a rate much lower than the national average of 13%, according to the 2019-2020 Uganda National Household Survey, which the Uganda Bureau of Statistics published in 2021. According to the same report, the literacy rate for the Karamojong — as the people of Karamoja are known — was at 30.4% for those aged 10 and older. In comparison, Kampala had a literacy rate of 93%.

Karamoja’s low rates of literacy can be attributed to the Karamojong’s resistance to formal education, which dates to 1926 when the British empire introduced primary schools there. The pastoralist Karamojong resented that the schools took children away from herding cattle, their major source of livelihood. In 1930, Karamojong elders cursed and symbolically buried a pen, which was also a tool colonial officials used to keep records and impose taxes that led to widespread poverty, according to a 2022 study published in the journal World Development. Elders didn’t lift the curse until 1995, shortly after the national government began reinvesting in the formal education sector.

In 1998, a collaboration between the government, local elders and Save the Children, a London-based advocacy group, created the Alternative Basic Education for Karamoja program, known as ABEK. Designed around the needs of the community, ABEK offers culturally-relevant Karamojong language curriculum and flexible learning hours — even allowing children to take their books and study while herding cattle. Though the program has achieved success, it was downsized in recent years from 209 centers to 52, after Save the Children cut funding to focus on other programs.

Recently, classrooms in some Karamoja schools are completely empty, says Lowari Peter Angelo, the education officer of Kotido district. Three schools have been entirely abandoned because of rampant break-ins and attacks by armed criminals, he says, which have traumatized staff, teachers and students. Angelo says parents want day schools closer to where their children live and are pushing for more boarding schools, which are safer because they are usually fenced and gated. 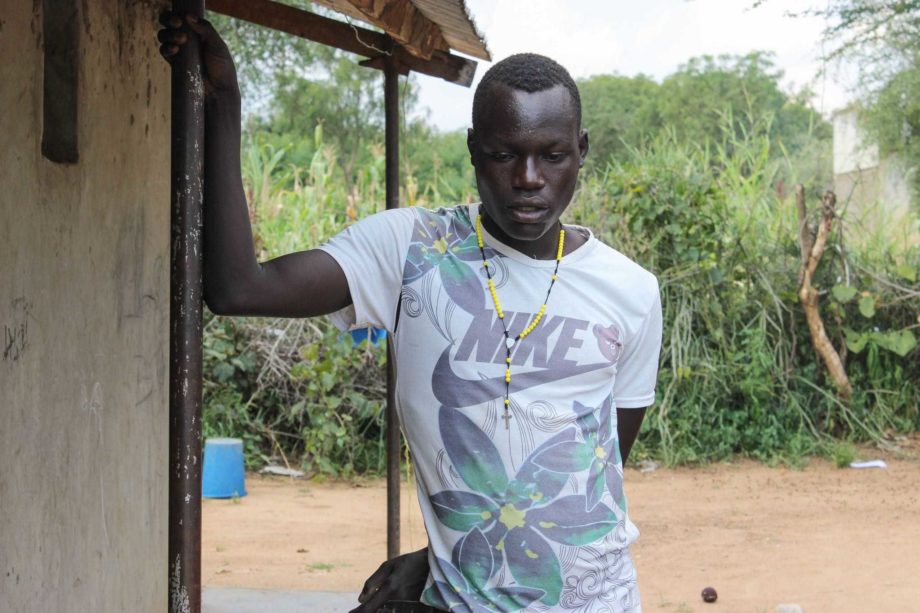 Loop Fred, 20, whose father was killed by suspected rustlers, stands in front of his house in Panyangara subcounty, Kotido district, Uganda. Loop says his father’s death has affected his academic performance and forced his sisters to drop out of school.

“Not all parishes have got primary schools, despite government policy stating that they should,” he says. “This is something we are pushing to change.”

But funding is limited, Angelo says. The government of Uganda pays the salaries of some teachers, but the schools do not have systems in place to monitor the quality of education. The community and parent contributions predominantly support the few ABEK centers that remain, but there is not enough to provide all the learning resources the children need.

Cattle rustling returned in 2019 to the region and escalated during the coronavirus pandemic, says Isaac Oware, the Uganda Peoples’ Defence Forces spokesperson for Karamoja. Groups of armed men resorted to theft and have killed hundreds.

“This has affected life in [the] region like agriculture and education. People are scared, but we are managing this emerging trend,” Oware says.

Loop Fred says his father was shot by rustlers last March while the family was having dinner. He believes his father, a parish chief, was killed by rustlers who suspected he was working with the government to disarm them. Loop, who at 20 years old is still in high school because of the educational challenges of the region, says his father’s death has led to a decline in his academic performance.

“Before my father was shot, I was performing better,” Loop says. “Now I am getting worse because of the trauma his death has caused me, and always thinking that they may come and kill us too.” 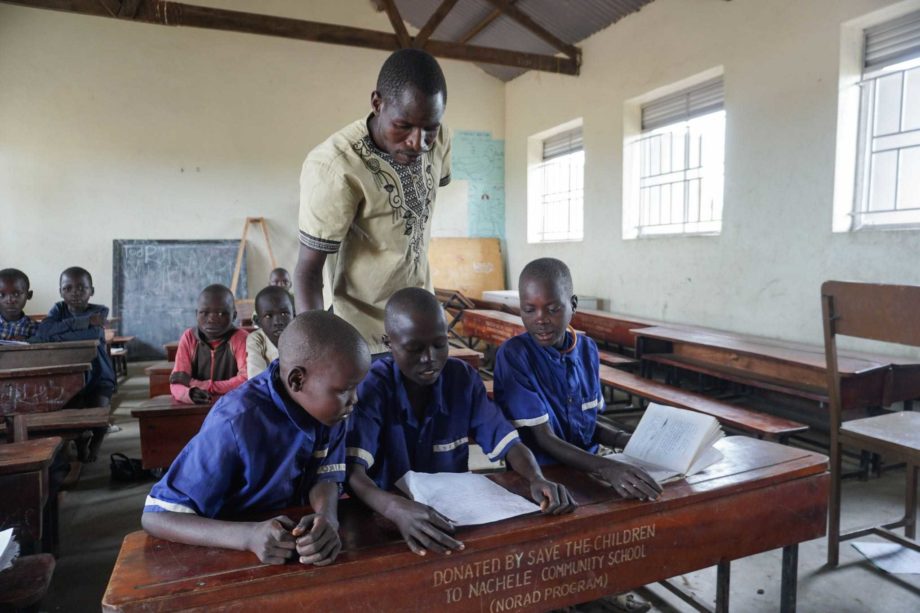 Louse Joseph helps his students during a science class in Moroto, Uganda.

Loop remembers his father as a loving man who invested in his children’s education, including girls, which is rare in Karamoja. The financial loss has also been huge for his family, Loop says, as his father was the only breadwinner. Loop’s mother is now rarely home because she goes out looking for money to care for the family. His three sisters have dropped out of school.

Ultimately, to end the cycle of violence in the region, it’s important for the government to invest in the education of Karamojong children, says John Peter Lokii, the Jie County representative for Kotido district.

Amiyo Sophie says she’d like to see her daughter — Sylvia, the 13-year-old who wants to be a teacher — go back to school because it might keep her from boys who could derail the girl’s dream. But Amiyo says the rampant attacks on villages by rustlers make that difficult.

“If I had money, Sylvia would be in boarding school because there it’s safer than being a day scholar,” she says. “We are saving and hoping to transfer her in the coming year.”

Clementina, the 14-year-old aspiring nurse, is frustrated too. She says the few months she has been out of school feel like years. Occasionally, she tries to study at home; but without anyone guiding her, it is extremely difficult. She spends most of her time playing and doing chores.

“This is the new normal,” she says, as she flips through her mathematics textbook. “At this rate, I don’t know if I will ever achieve my dream of becoming a nurse by age 25.”