Uganda’s Karamoja region is often portrayed as a rural frontier where life revolves around cattle, poverty and firearms. This photo story, a collaboration between reporters from Global Press Journal’s Uganda team, is the first in a series providing a glimpse of what life is really like in the northeast region of the country.

Photo at top: Norah Panger, 19, carries water in a jerry can on her head in Kokoya village in Kotido district. Infrastructure is often absent or poorly-maintained in the Karamoja region, making sustainable access to goods and services a challenge for many people.

But there’s much more to Karamoja than that.

Of the 1.2 million people estimated to live here, just a portion are part of the Karamojong community, though that name is often used to describe everyone who lives in the region. The other largest groups are the Dodoth and the Jie.

For centuries, these groups have migrated seasonally with their livestock to mobile cattle camps, referred to locally as kraals, or ngawiyoi in the Ngakarimojong language. They also engage in farming during the wet season.

Cattle raiding, also called cattle rustling, has long been a major fixture among pastoral communities in east Africa, but it’s usually associated with the Karamojong. The raids, which can turn violent, are designed to redistribute wealth.

The Ugandan government has engaged in disarmament efforts since the early 2000s to collect the unregistered firearms in the Karamoja region, as well as provide education to children there, most of whom never attend school. Still, people in the Karamoja region have retained their way of life.

GPJ reporters Nakisanze Segawa and Apophia Agiresaasi visited the Karamoja region to report from the ground. This photo story is the first in a series that explores what life is really like there. 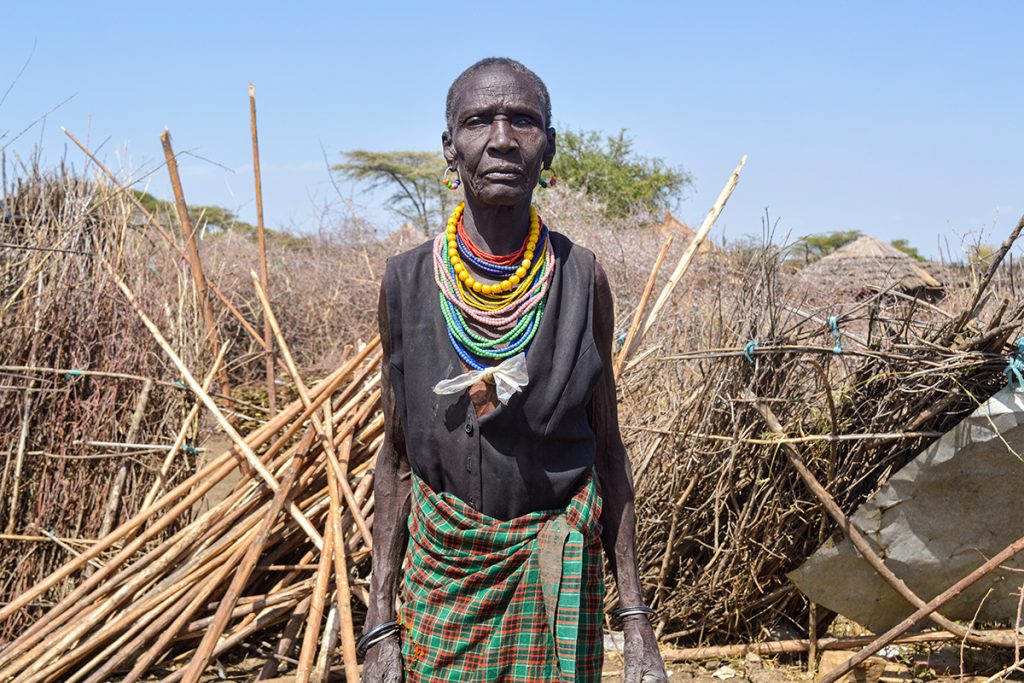 Nakai Korobe wears a Lesu skirt and traditional jewelry in Naitakwae, a village in Moroto district. Most people in the region tie their livelihood directly to the land, so they’re vulnerable to extreme weather events that affect food production. Researchers consider it to be on the front lines of places affected by climate change. One study examining changes in the region from 1981 to 2015 found rising temperatures and increasingly erratic rainfall, meaning that dry spells happen more frequently and for longer periods of time than they once did. 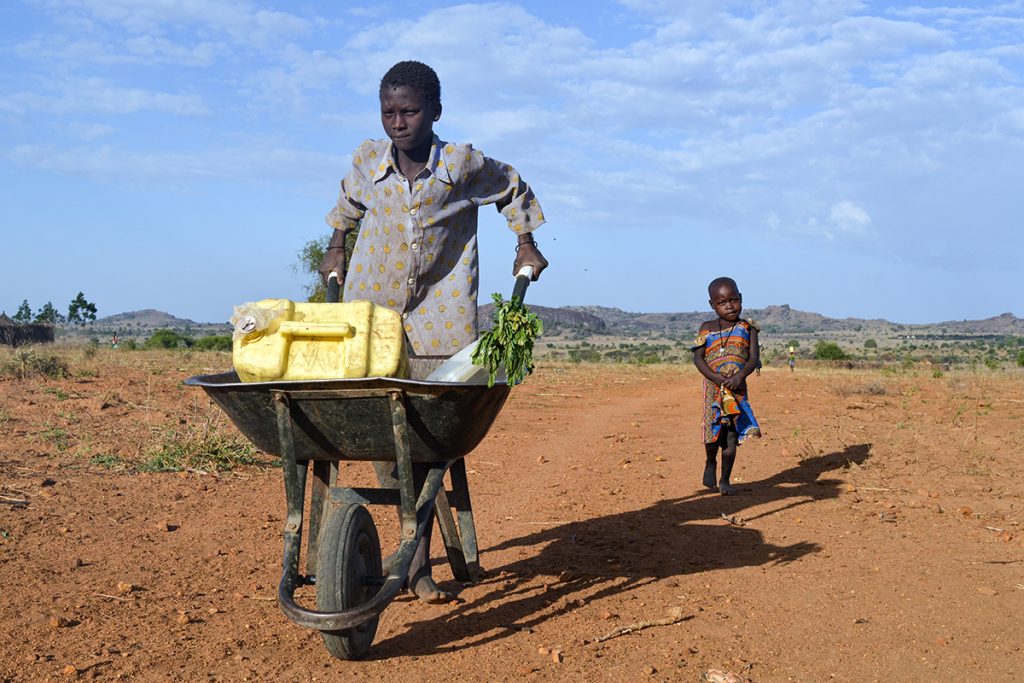 Lochul Pagre, 9, pushes a jerry can filled with water in wheelbarrow in the village of Kokoya in Kotido district. His sister, Lilly Nyapeng, 4, follows. The two trekked 4 kilometers (about 2.5 miles) to fetch water.

The Karamoja region’s dependence on agriculture makes people there vulnerable to changes in weather patterns. Nearly three-quarters of people surveyed by a government study were affected by a drought or dry spell in the previous five years. A report from Uganda’s Ministry of Water and Environment in 2015 found that droughts had wiped out 50-100% of crop yields for households in the areas stricken by drought recently.

The Food and Agriculture Organization of the U.N. announced in research released on Monday that a drought is cause for serious concern throughout East Africa, including in the Karamoja region. Crop harvests are expected to be between 30% and 50% below average in Uganda, according to that research. 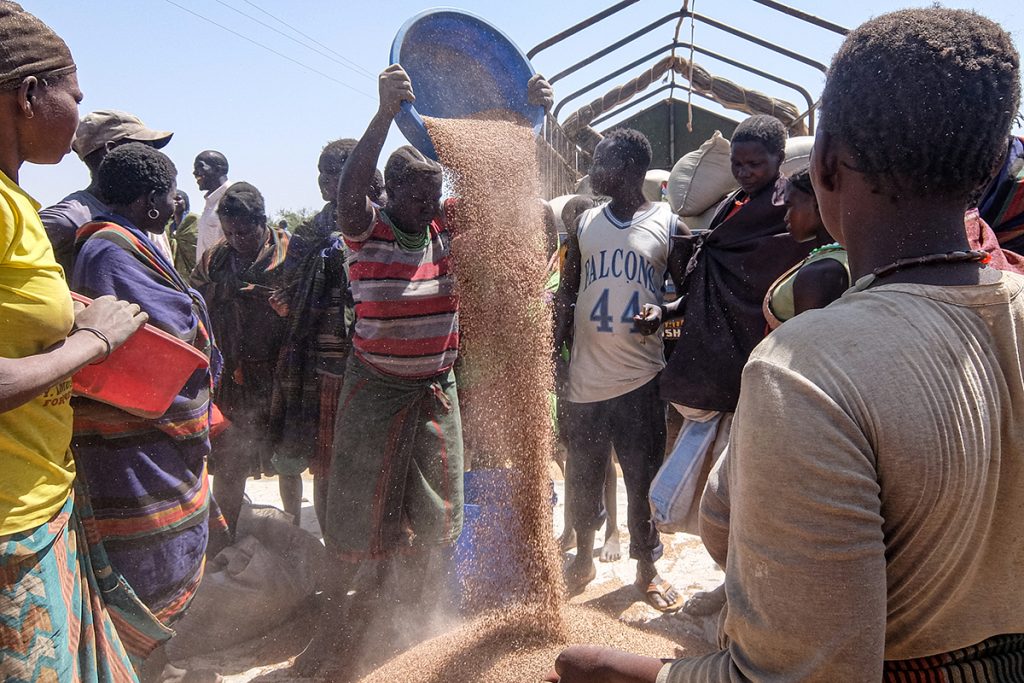 Food insecurity, a major problem in the Karamoja region, is a growing concern. It’s estimated that 50% of the people in the region experience food insecurity and 11% are malnourished in some districts, according to data collected by the Uganda National Meteorological Authority, in partnership with the World Food Programme and other international agencies. Just under half of the people in the area have access to safe drinking water and even fewer – just 8% – have access to sanitation units, a report published by the Geneva International Centre for Humanitarian Demining and the Danish Refugee Council.

If weather patterns continue their current trends, the people of Karamoja will potentially experience more (and more intense) heat waves, more challenges to find water, unhealthy livestock and smaller harvests. And as food security worsens, evidence shows that ripple effects can escalate quickly. Possible effects, including rising prices, falling incomes and more cases of disease and malnutrition can be expected – all of which increase the chance for social unrest. 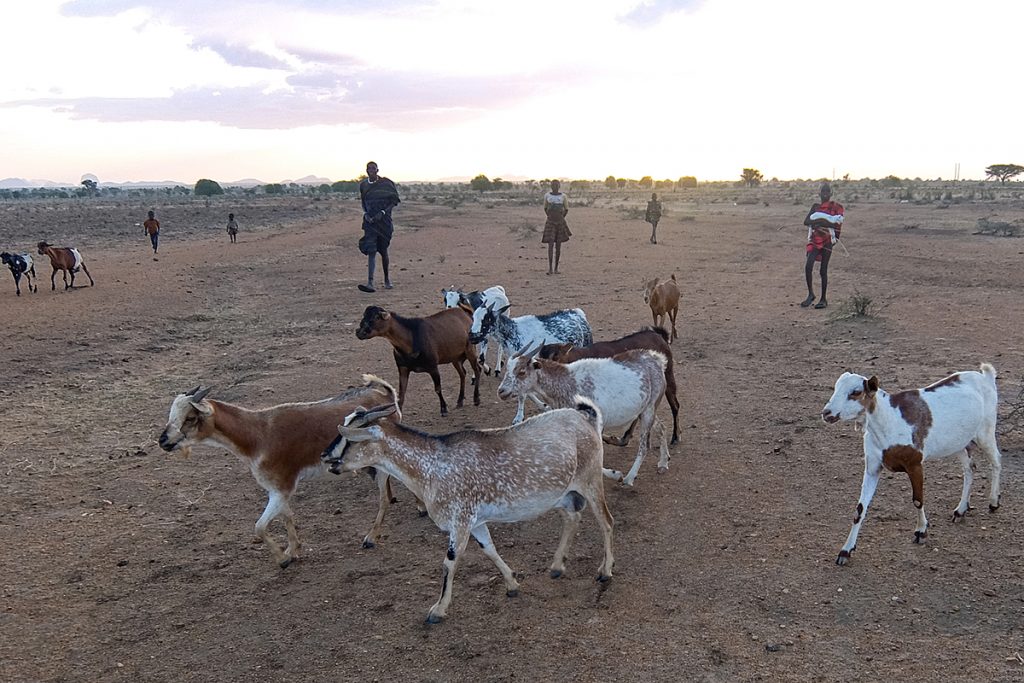 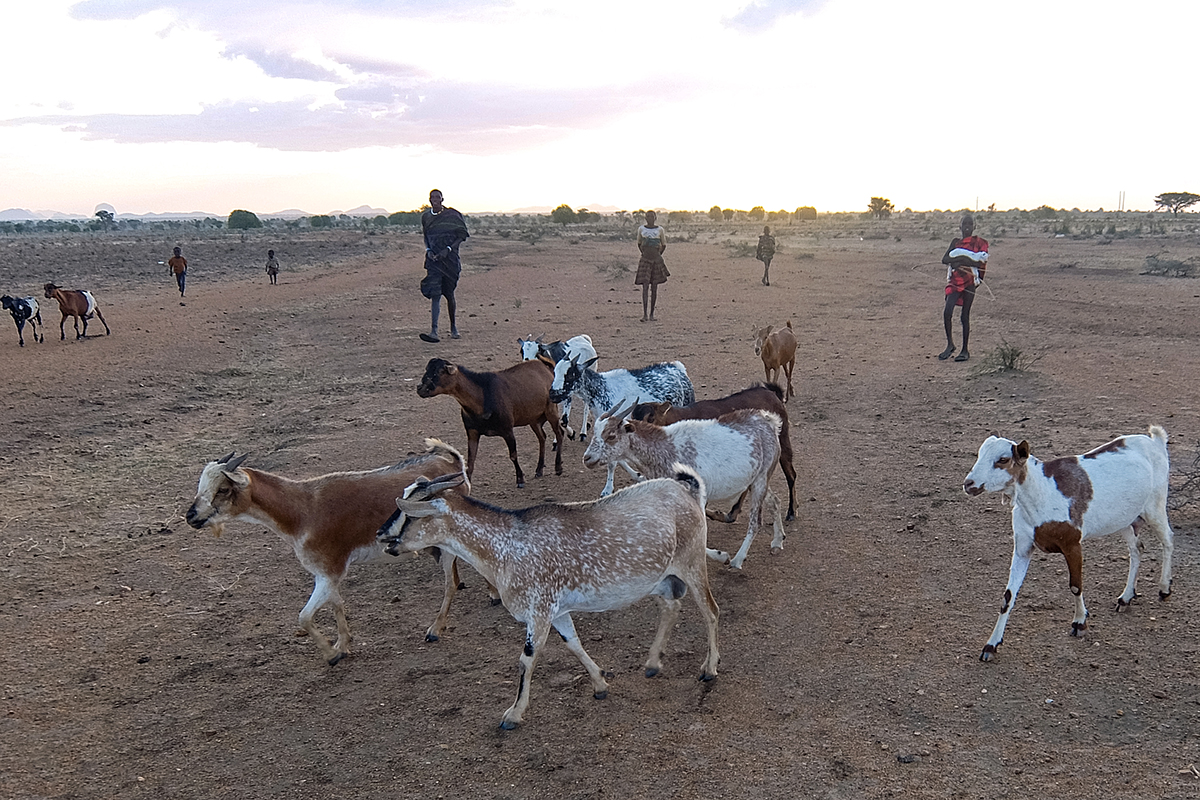 Jude Lokwang, 7, far right, and his siblings bring back their family’s goats after a day of herding in Kotido district.

While it’s undisputed that the Karamoja region is widely impoverished, data from international organizations that track cash supplies and spending don’t account for traditional forms of wealth, including livestock. Rampant poverty in the region leads to serious social problems including desperate efforts to earn money and find food. It’s estimated that the majority of children living on the streets or in other vulnerable conditions in Kampala, Uganda’s capital city, are from Karamoja; an estimated 90%, according to a Geneva International Centre for Humanitarian Demining and the Danish Refugee Council report. Surveys conducted by United Global Action with Street Children, as well as data confirmed by many other researchers, support this finding. 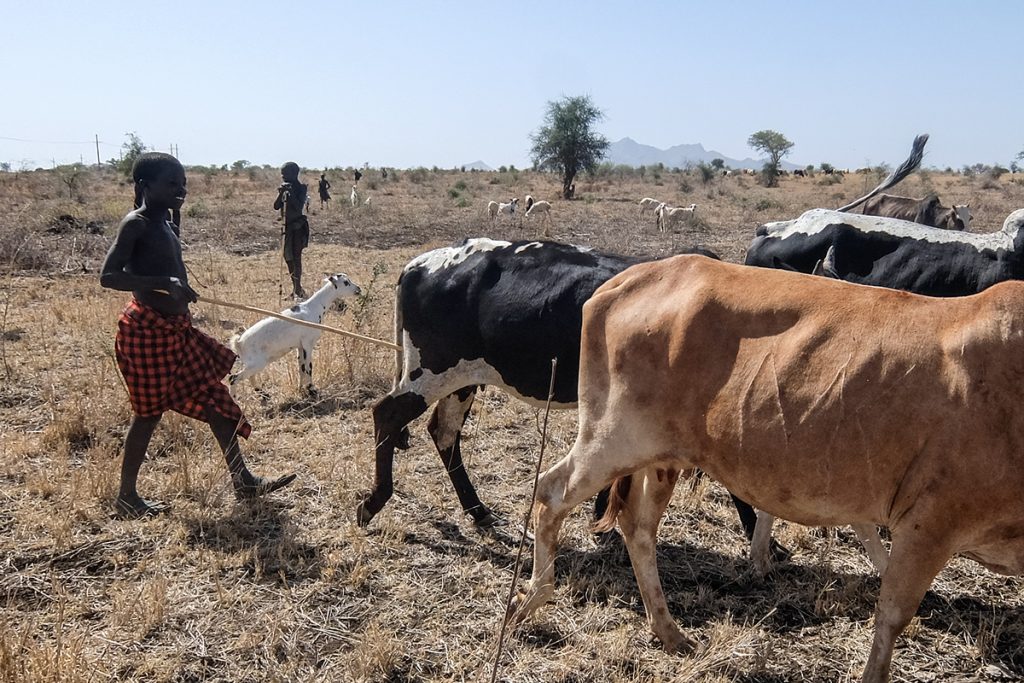 Eria Lumuny, 9, tends cattle in Panyangara in Kotido district. Cattle raiding is a serious issue in the Karamoja region, but that practice became much more dangerous when firearms became involved. Those arms were brought to the area by traders from Khartoum, Ethiopia and Zanzibar in the mid-nineteenth century, according to research published by the Small Arms Survey, a project which analyzes the role of weapons in armed violence, as well as additional research conducted by analysts. More weapons flowed into Karamoja from Sudan and South Sudan during a conflict there in the early 2000s. Some researchers say members of the Ugandan military also sell firearms to people in the Karamoja region. Recent disarmament campaigns have a mixed record, and their limited success came at the cost of reported human rights abuses. 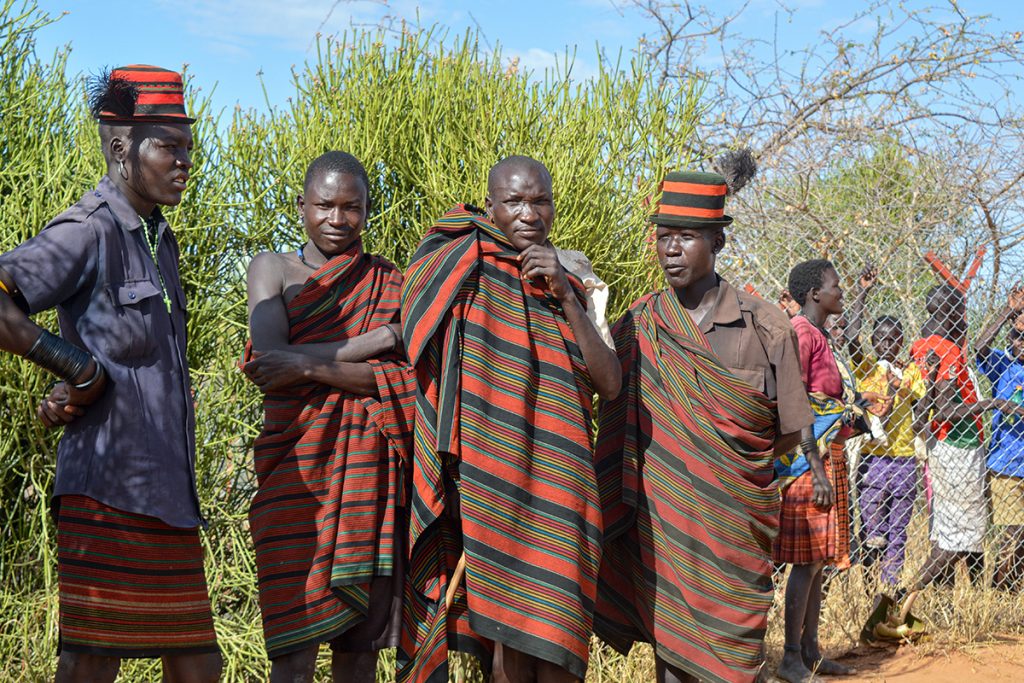 Oryemu Limaziya (left to right), Moding Locho, Luyila Kapel and Lopeti Lotori wear traditional clothing known locally as Lesu in the village of Kacheri in the Karamoja region’s Kotido district. Between 1809-1894, the British government declared Uganda a protectorate. It took four more years to bring Karamoja into the fold, only to discover that the colonial system didn’t fare well in the region. After struggling to encourage the nomadic communities to pay taxes, grow cash crops and accept wage labor, the British relaxed their control and focused exclusively on restricting cattle raids, the gun trade and the ivory trade. 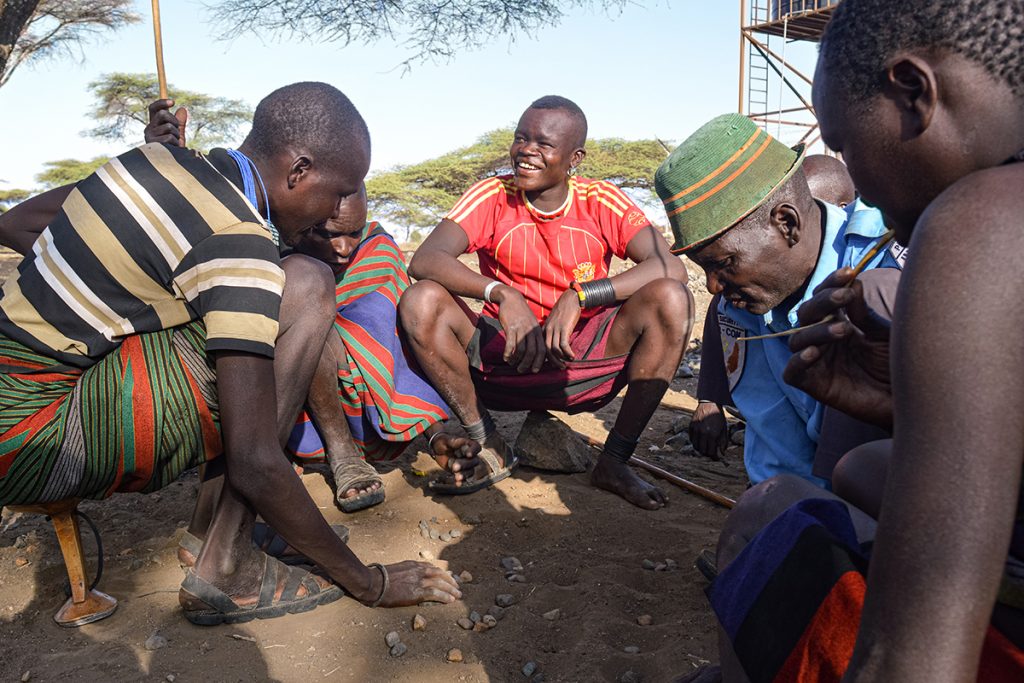 Men in the Nachere village in Moroto district play a game called mweso, in which 32 holes are drilled into the ground to create a board. Small stones and seeds are used as playing pieces.

About 80% of the people live below the poverty line in the Karamoja region. Of those, more than half live in what the U.N. calls “absolute poverty,” on less than $1.90 per day. That data doesn’t measure traditional forms of wealth, including livestock. 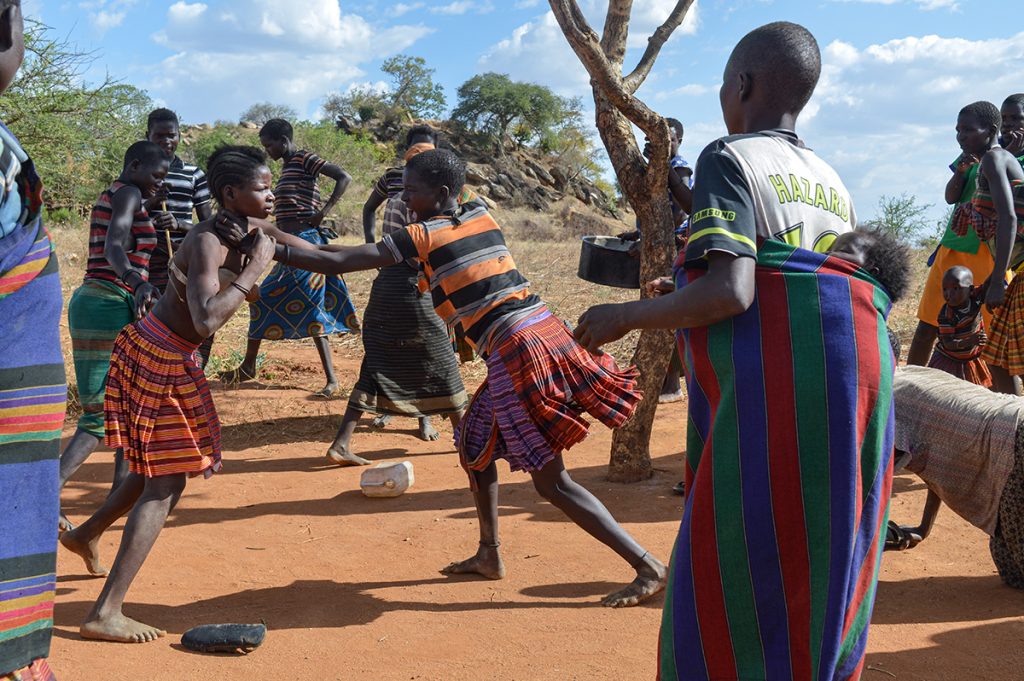 Lokulu Pauline Lelekwang, 20 (left), and Dodoi Jennifer, 21 (right), fight over a disputed bar tab in the village of Menya in Kotido district. Lokulu accused Dodoi of taking 500 Ugandan shillings (about 14 cents) worth of beer from her stall and never paying for it.

The Karamoja region’s population is young and growing. The average age is 15, and the average woman of child-bearing age gives birth to eight children, according to data from the United Nations Population Fund. 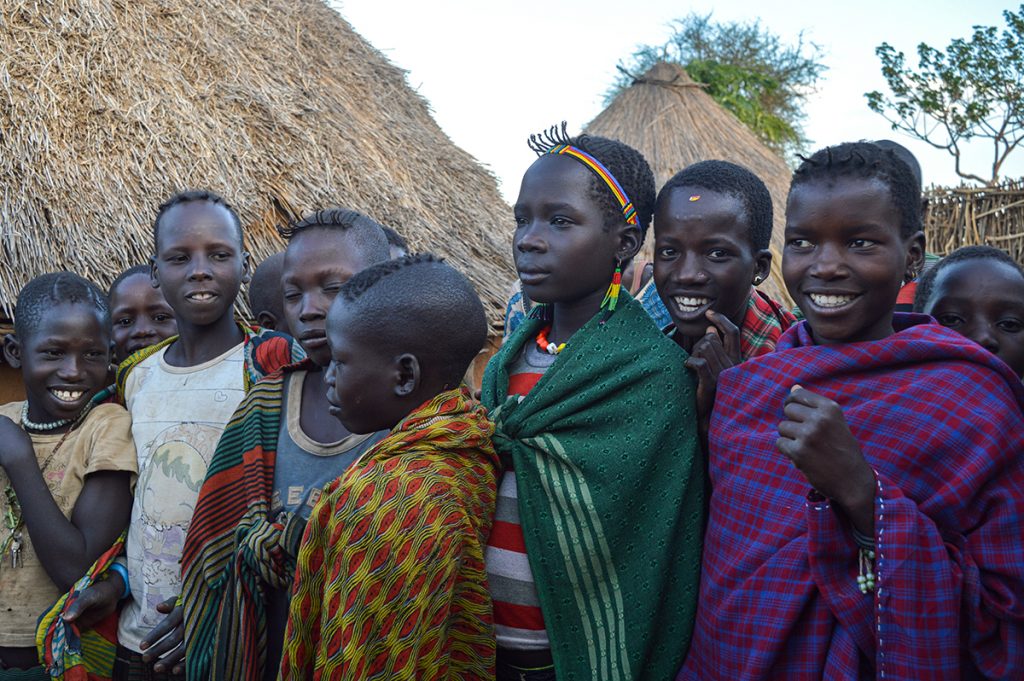 Girls between the ages of 9 and 12 show off traditional hairstyles in the village of Lokitelaebu in Kotido district. These hairstyles are often worn by girls who are nearing adulthood. The girls sleep in their own house for protection against what’s known locally ascourtship rape.

The region’s overall literacy rate is under 25%, compared to a national average of 68%, according to the Uganda Bureau of Statistics. Most children don’t attend school at all. In 1998, the Ugandan government implemented a program called Alternative Basic Education for Karamoja, which brings classrooms to the areas where children graze their family’s cattle.