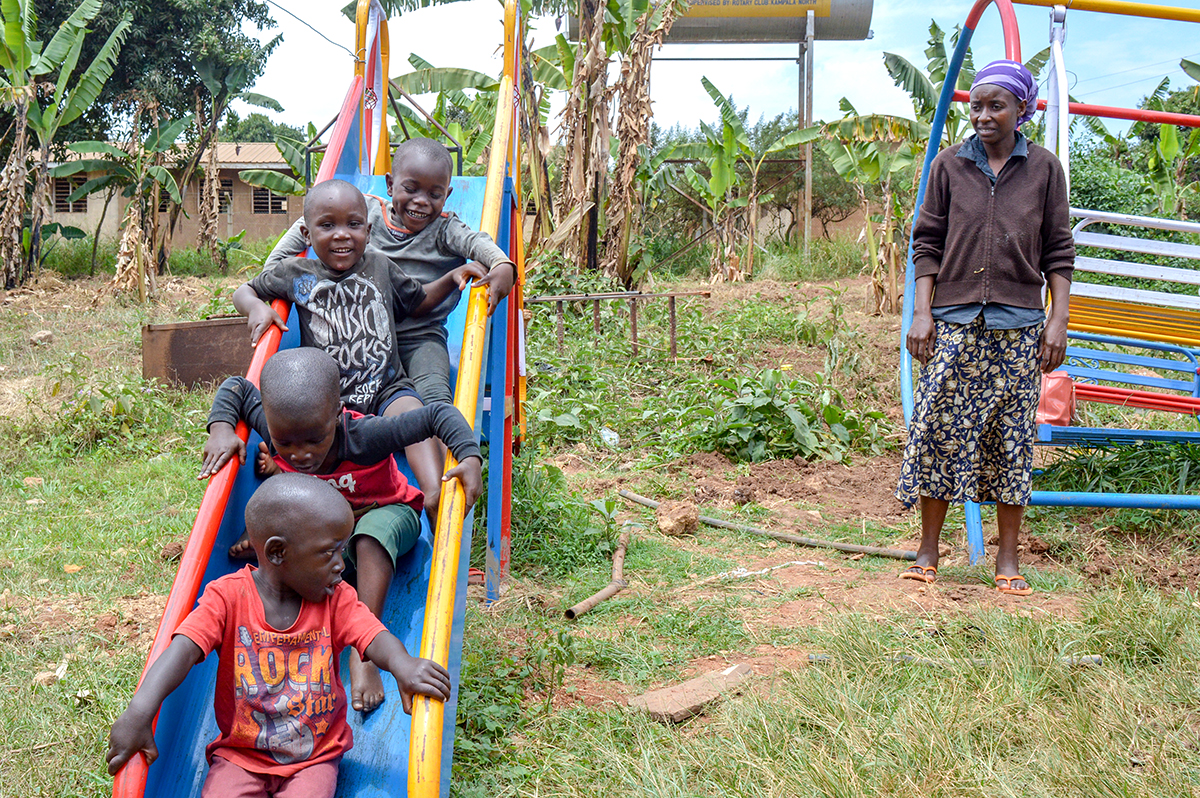 “The institute wasn’t registered and therefore unknown to the ministry,” says Freeman Arthur Kato, a children’s welfare official in the Ministry of Gender, Labor and Social Development’s Alternative Care Department. “Someone tipped us about it.”

By the end of the day, the home was closed. The 19 children who lived there were taken to Watoto Ministries, a large organization that runs several children’s homes, according to a government official.

Even as the children who were living at the home were being taken to Watoto Ministries, Wells says, government social workers continued to bring more children to Hope Center Uganda.

“We were very confused,” Wells says. “Why would you close the center and then continue to still give us kids that were abandoned or abused?”

Wells says he and other members of the board of directors visited Uganda after the closure and met with government officials to ensure that the home was operating legally. Wells believes the home was registered at one point, but says that an unscrupulous director, who has since been removed from her post, might have failed to keep the registration current, or the registration process from the government’s side might have been faulty.

The home is now open as a community care center, where abandoned or lost children can be housed for up to six months until their families are found, Kato says. Conditions there improved since the time when it was forcibly closed, which is why the government quickly began sending children there again, he adds.

Wells says he knows there were some problems at the home in the past, but that those were fixed by the time officials unexpectedly shut its doors.

“We don’t know why we were shut down,” Wells says. “None of it made sense.”

Global Press Journal visited the home in November. There is a bedroom for boys and a bedroom for girls, each with multiple beds that were neatly made with linens.

Kato says Hope Center Uganda’s closure was part of a major effort nationwide to shut down unregistered homes. Seven have been closed this year so far, he says.

But as fast as he and his team work, he says, there are always more children’s institutions opening without the government’s knowledge and operating with total impunity and zero oversight.

Kato estimates that such institutions are opening “weekly” in Uganda.

Some reports cite a different number, but Kato says there are about 300 registered institutions that care for children. There are 600 unregistered children’s homes, housing a total of about 6,000 children, according to 2012 estimates from the Ministry of Gender, Labor and Social Development.

Why would you close the center and then continue to still give us kids that were abandoned or abused?Steve Wells, an American who is a board member of Hope Center

That’s a huge number of homes for a country the size of Uganda, says Innocent Byaruhanga, assistant commissioner for family affairs in the Ministry of Gender, Labor and Social Development. It’s an especially large number considering Uganda’s traditional approach to childrearing, in which children are regarded as a communal responsibility.

“Many of these children haven’t even lost both parents,” he says. “If a child loses both parents, which is rare, then the extended family will take responsibility of caring for such a child.”

Byaruhanga adds that the inflow of donor funding from western countries is partly responsible for the high number of institutions and the number of children, including those who aren’t orphans, who wind up in them.

“Some of the people who start this institution do it not to help the children, but rather to exploit them because they know that they will get funding from the western donors,” he says.

The institutions bring in money by running child sponsorship schemes, collecting donations for general expenses and even by facilitating adoptions, Kato says, citing a 2012 study by the Ministry of Gender, Labor and Social Development.

And when so many institutions are willing to take children, some parents use them as free boarding schools, the study notes.

As much as $250 million in funds sent from western countries, mostly from the U.S., is spent to support children’s institutions in Uganda, according to a not-yet-published government report. One person who worked on the report says it might become publicly available next year.

The exact amount of money isn’t known, Kato says, because so many of the institutions aren’t registered.

The Ugandan government joins other African nations in expressing concern over children’s homes, orphanages and other similar institutions. In Rwanda, those institutions are being closed and the children who live in them are being sent to live with families.(Read our coverage from Rwanda here.)

Caroline Bankusha, a program officer at Alternative Care Initiatives, which supports children who have been in institutions and other homes and helps reunite families, says children who grow up in institutions tend to have low self-esteem and a loss of identity. In some cases, the children are raised in Christian institutions, even if they were born into Muslim families, or are forced to speak a language other than their mother tongue.

On top of all that, she says, children know that the people caring for them are paid to do so.

“Most times these ‘mothers’ leave their workplace and a new ‘mother’ is brought in – another ‘mother’ whose love for you is paid,” she says. “This causes unmeasurable, harmful risks to the children.”

Hope Center Uganda operates on a budget of about $3,500 per month, all of it donated from people in the U.S., says Wells, the home’s board member.

Wells works at a church in Lincoln, Nebraska, a state in the breadbasket heartland of the U.S. He says his work on the board of Hope Center Uganda isn’t affiliated with the church, but the church’s website lists the home as one of its ministries.

He says he and his wife, Barbie Wells, got involved with the home after it was founded by another American, Angie Halverstadt. But Wells’ initial excitement turned sour.

Wells, whose board has ultimate control over the home, places the blame for the home’s poor condition squarely in Halverstadt. The board dismissed her, he says, and replaced her with Isanga, whom he believes to be trustworthy.

Global Press Journal contacted Halverstadt through Facebook Messenger, but Halverstadt did not respond. Efforts to find her in person in Uganda were unfruitful.

Mia Cannedy, an American who is now a real estate agent in Colorado, a mountainous state in that country’s western region, raised more than $7,000 via GoFundMe, the online fundraising site, to spend part of 2016 working at Hope Center Uganda. She’d been there once before, for two weeks, and saw what she felt was a need for more people to help care for the children who lived there.

It wasn’t long before Cannedy began to notice problems. There were lax health standards, she says, and the children were served basic, starchy foods – never meat or vegetables. Most troubling, Cannedy says, is that the children appeared to be disengaged from normal human connection.

“They’re so under-stimulated that as soon as you pick them up they just fall asleep,” she says. “I would talk about, how do we get them active? How do we get their minds engaged?”

But when she asked the home’s director to discuss the problem, Cannedy says she was told that the children’s behavior was normal in Uganda.

Cannedy says she initially believed that the children were orphans, but soon discovered that the majority of them likely were not.

That’s not uncommon for children who are in homes. Some agencies, including the Lumos Foundation, an organization that aims to find better care options for children in institutions, estimate that more than 80 percent of institutionalized children have at least one living parent.

Cannedy says that estimate is on par with what she saw at Hope Center Uganda.

Nonetheless, Americans supported Hope Center Uganda, and its message that it was helping abandoned or orphaned children.

David Benson, an American who often travels to Africa for his work in the plant breeding and seed production industry, says that for a time he sponsored children at Hope Center Uganda for $40 each per month.

“It was good PR,” Benson says, referring to the positive public relations image the sponsorships would lend him.

But he ended those sponsorships after he visited Hope Center Uganda.

“We didn’t feel like the care was getting where it was supposed to,” he says.

Wells, the board member, bristles at the suggestion that he and other Americans who support the home are to blame for the problems there.

“Is there ownership from our point of view, at the time with how little we knew? Looking back, yeah,” he says. “But I don’t know that there’s a book that says, ‘If you’re an American and you believe you can do something good in another country, here’s how you do it.’”