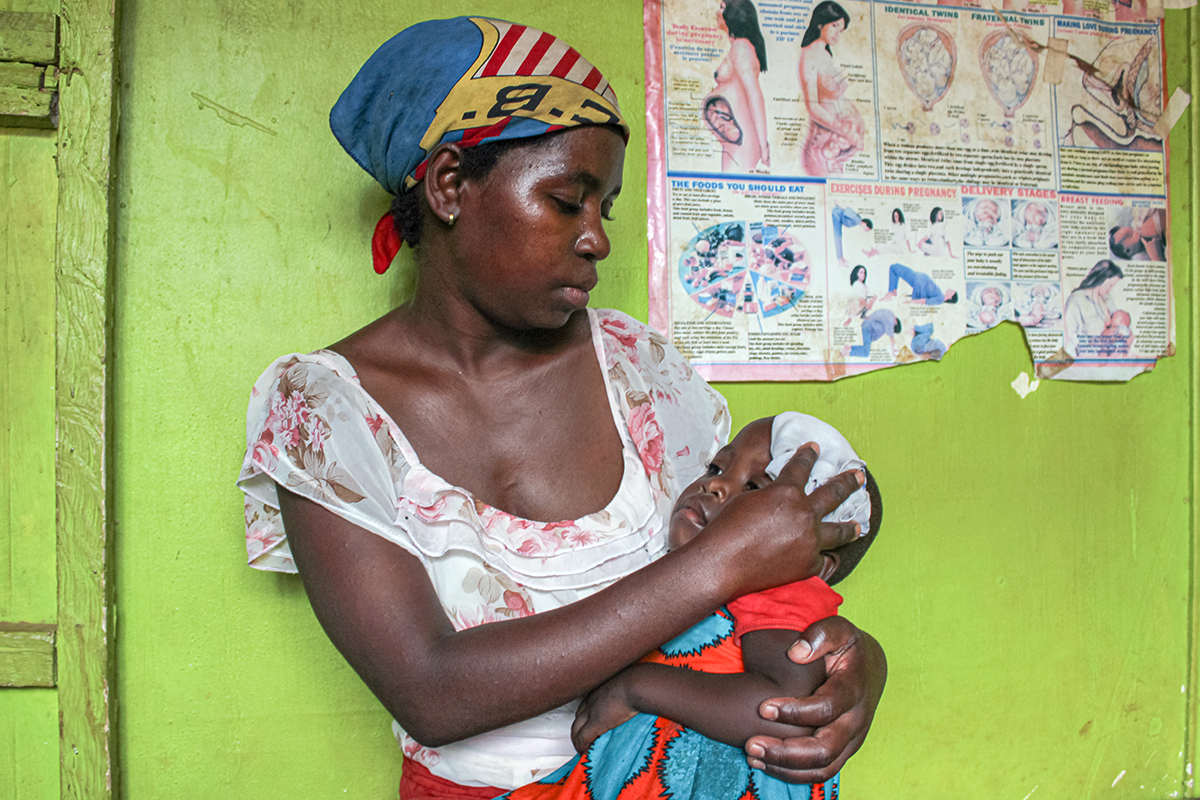 MPIGI, UGANDA— Goreti Nankya sits in the waiting area of a small health center about 10 kilometers (about 6.2 miles) from the center of Mpigi with her 3-year-old son. The boy has malaria, but there are no drugs to treat him at the center.

“I have been told to go to the pharmacy nearby where I should find the drugs,” Nankya says as she mops her son’s forehead with a cool, wet towel.

When Nankya went to the pharmacy, she was told that Coartem, a drug commonly used to treat malaria, would cost her 6,000 Ugandan shillings ($1.62). She didn’t have the money. Nankya’s most recent job was at a roadside food stall, where she earned about 10,000 shillings (about $2.70) a day. But that was a year ago. Now, she’s unemployed.

“I guess I should be happy it’s not severe malaria,” she says.

Malaria is one of the leading causes of death in Uganda, accounting for 34% of outpatient visits and 28% of hospital admissions according to 2015 data from Uganda’s Health Management Information System. Health facilities in Uganda reported more than 11 million cases of malaria in 2017, according to the World Health Organization.

Uganda spends $100 million a year on malaria-related issues and an additional $40 million a year on anti-malaria supplies, including drugs to treat the illness, says Jimmy Opigo, manager for the Ugandan government’s malaria control program.

But those drugs often do not make it into the hands of people like Nankya and her son.

Rather, the drugs are stolen in the night and carried out on cars and buses to Democratic Republic of Congo, South Sudan, Kenya and Burundi, says Bitekyerezo K. Medard, chairman of the National Drug Authority (NDA), a government body that regulates the import, export and manufacture of drugs. 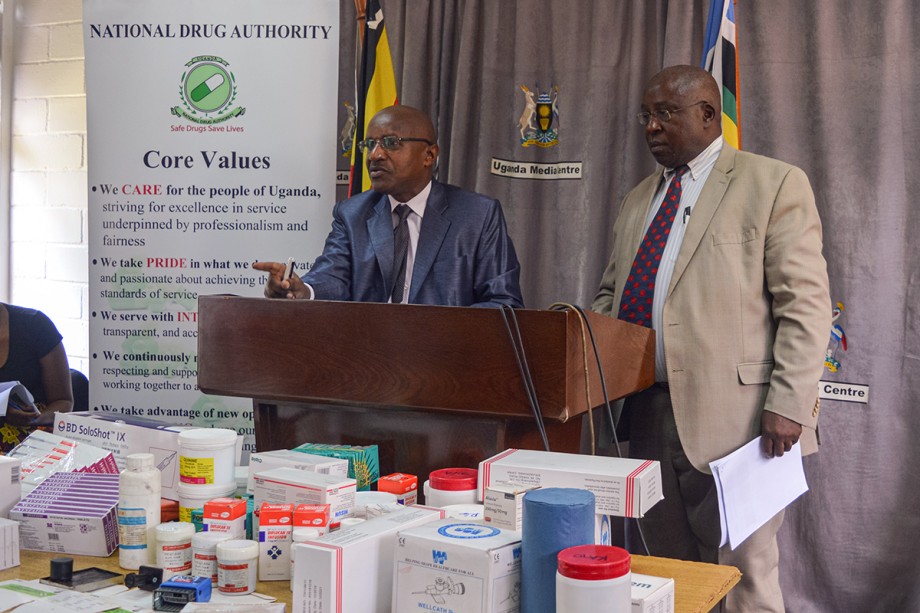 Herod Byamugisha, head of legal at the National Drug Authority (NDA) and Kyomukama Samuel, head of enforcement at the NDA, display some of the drugs impounded as part of a country-wide operation during a press conference at the Media Center Uganda.

And many of the drugs left in-country are counterfeit, missing active ingredients or laced with so little that they don’t kick the malaria once the patient takes them.

“Malaria affects and kills many people in Uganda,” Bitekyerezo says. “So that makes the anti-malarial more in demand than any other drugs.”

The ready market for the drugs is a major incentive for theft, says Opigo.

Bitekyerezo says theft of government drugs intended for the public is common practice in government health facilities. Malaria drugs are among the most frequently stolen.

“The stealing is castigated by private pharmacists who buy and sell these drugs,” he says. “We believe they work with mafias, some of whom are high placed government officials.”

Operations by the NDA, Ministry of Health and Uganda Police Force to counter the theft of the drugs are ongoing, he says. But when powerful, well-affiliated people engineer the theft, the process is not easy.

According to a Ministry of Health press statement, 165 boxes of medicine intended for public health facilities were impounded through a countrywide operation that launched in March. In Kaberamaido district, dozens of Coartem tablets were seized from a private pharmacy known as Healing Drug Shop. In Kampala, 34 boxes of Lumartem DT (Artemether-Lumefantrine), another anti-malarial drug, were found with labels reading, ‘Government of Uganda, Not for Sale.”

Six people were arrested as part of the operation and taken to court.

But many more drugs, valued at millions of dollars in total, remain unaccounted for, fueling a shortage in public health facilities, Bitekyerezo says.

Anti-malarial drugs like Coartem are supposed to be free at all government hospitals, but when the drugs are not there, patients are forced to go seek treatment elsewhere. Some Ugandans purchase them from private pharmacies for between 6,000 and 7,000 Ugandan shillings a dosage ($1.62-$1.89). Those unable to afford the steep fee turn to traditional healers and herbalists.

Sarah Nakawesi resorted to taking herbs after she and her 4-year-old son became sick with malaria. She says her local health center did not have the necessary drugs and referred her to a private pharmacy.

Even when drugs are available at public health facilities, recovery isn’t guaranteed.

“In about three days, I was feeling better and went home,” Nkizibweki, who sells children’s clothes, says.

She and the doctor believe the first facility gave her fake medicine.

Fake anti-malarials are responsible for up to 20% of the 1 million deaths attributed to malaria worldwide each year according to data from the World Health Organization. Fake and counterfeit drugs are increasingly in global circulation, accounting for over $75 billion U.S. dollars of drug sales in 2010. That’s an increase of more than 92% from 2005, according to research done at Jimma University.

According to a test conducted by researchers from Harvard University and Stockholm University, 37% of private drug shops in Uganda sell fake anti-malarial drugs such as Coartem.

Dr. Geoffrey Bbosa, a general practitioner at Abii Clinic and Laboratory Services, says the fake medicine may contain a lower dose of the active ingredient listed on the package or not contain the ingredient at all. As a result, patients do not recover after completing a full dose of the prescribed medicine.

“People end up spending more time and money in hospital,” he says.

Kenneth Mwehonge, Health Policy Advocacy program manager at Coalition for Health Promotion and Social Development (HEPS-Uganda), says there is poor regulation in the private sector as medicines imported from Europe, India, China and America are not always tested by the National Drug Authority before entering the market.

“We have porous borders,” he says. “Samples are supposed to be taken and tested but that is not always the case.”

As a result, Mwehonge says the quality of medicines on the market, especially those sold in the private sector, is questionable.

Dr. Bbosa says that clients often insist on medicines from certain countries that they presume to be of higher quality.

“There is a belief that medicines from China and India are cheaper but of lower quality and medicines from the UK and Germany are more expensive,” he says. “Even in pharmacies the prices are different.”

But Fredrick Ssekyana, head of public relations at the National Drug Authority (NDA) says the NDA ensures medicines that are made and used in Uganda fulfill the intended purpose.

“Before any medicine comes into the country, we first conduct due diligence to ensure quality is embedded in to the supply chain,” he says.

Ssekyana says the NDA is responsible for authorizing drug shops and pharmacies. Those who operate these facilities must be deemed qualified and the storage facility in a state that will not compromise the integrity of the drug. He adds that the NDA conducts regular inspections to monitor quality and efficacy of drugs on the market.

“We have inspectors in different parts of the country. They keep doing surveys, pick samples and take to lab for testing,” he says. “Regional referral hospitals are routinely reporting on performance of medicine in case of any challenge such as adverse drug reaction.”

“The budget was increased to buy drugs for Ugandans,” says Bitekyerezo. “But unfortunately the stealing frustrates government’s effort to provide better health service to the people.”