Skip to main content
The story you are reading was published on Tuesday September 12, 2017. To read more recent stories click here. 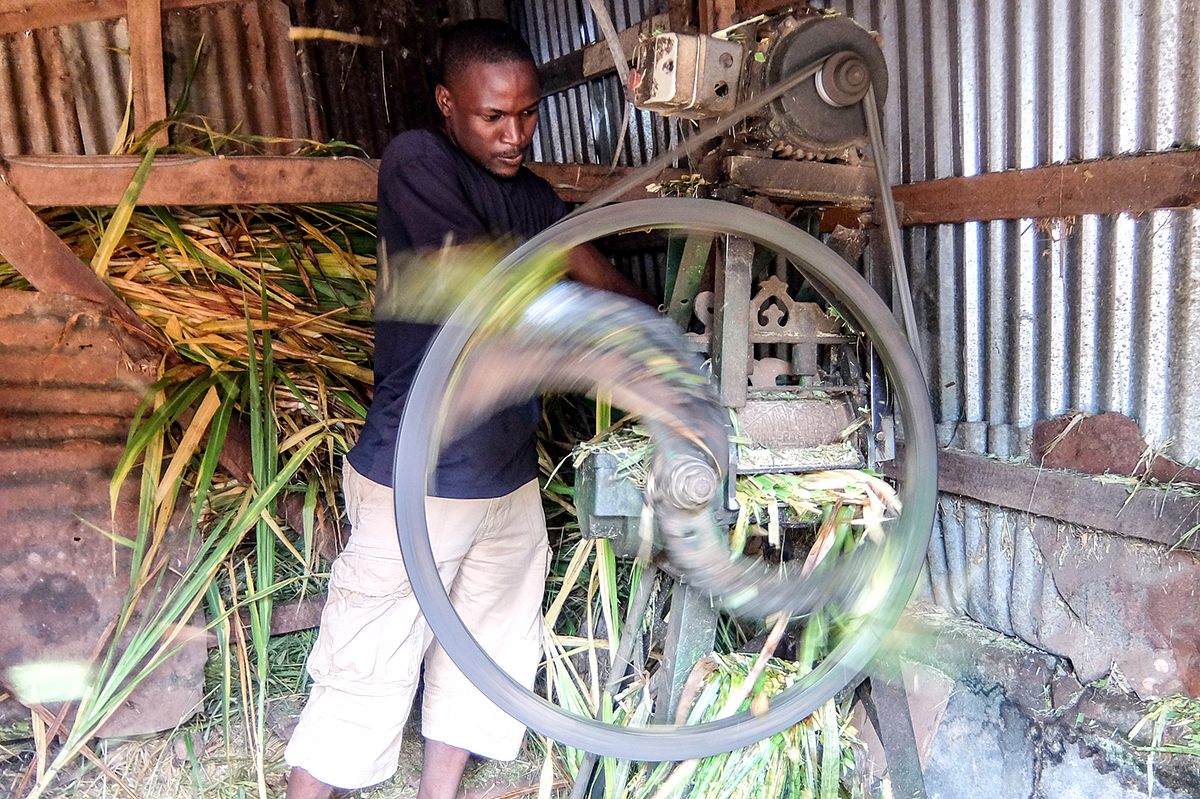 MUKONO, UGANDA —Hudson Nsubuga, 24, looks out over his 1-acre plantation. It is weedless and neat.

Nsubuga decided to become a farmer, a profession that has become less attractive to young people in Uganda in recent years, immediately after he finished secondary school in 2014.

But he wanted to be a different kind of farmer – a smart farmer.

He says smart farming, defined by cutting-edge techniques, water-saving methods, and not as vulnerable as traditional farming to the vagaries of weather, will improve his family’s economic situation.

“The climate has changed. So we need to change our farming methods,” he says.“In the past, there was enough rain, and it was easy to predict the weather patterns. But that’s not possible now. Rain is luck now.”

Across Uganda, agriculture is mainly rain-fed, which means most small-scale farmers do not have irrigation systems that help them survive periods of drought.

“Planting on a 1-acre piece of land with smart innovations can be profitable. In my own garden, I planted half a kilo (1 pound) of beans. Out of that I got 45 kilos (99 pounds) of beans,” Nsubuga says.

To produce such yields, Nsubuga says he uses a method called minimum tillage, which minimizes soil manipulation and does not use plows to turn the soil. Instead, he carefully digs holes that create ample space for water to gather when it rains. 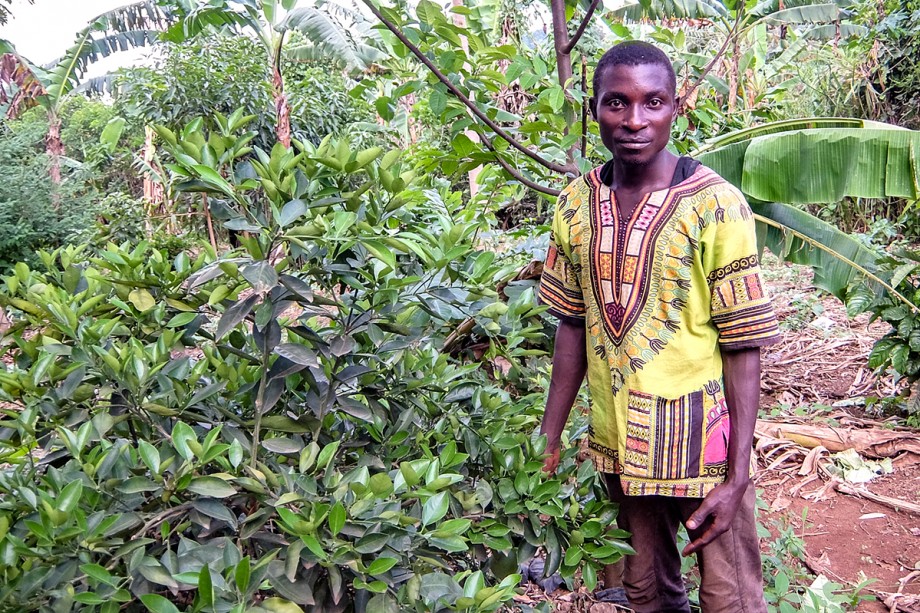 “For one to get such results, a crop has to have enough space – a bank where, in that space, enough water can be stored,” he says.

Nsubuga was one of many young farmers trained by the Ministry of Agriculture, Animal Industries and Fisheries in adopting climate-change innovations to help reduce risks to small-scale farmers. He took the training in 2014, and today Nsubuga is also a trainer, helping other farmers learn smart-farming techniques.

The agricultural sector remains the backbone of Uganda’s economy, the main source of livelihood and employment for more than 60 percent of the population, according to the latest national census. It contributes more than 70 percent of Uganda’s export earnings, according to a report published by the Food and Agriculture Organization of the United Nations.

Climate change continues to have a major impact on small-scale farmers throughout the country, as farmers lose crops and food prices soar due to the resulting food shortages each season. In response, the government is working to reach more rural farmers with smart-farming techniques that they can use year-round.

Uganda experienced a dry spell in 2016 that saw a majority of farmers lose crops and livestock because they lackedthe knowledge and resources to cope with climate change.

Jolly Kabirizi, an agricultural specialist at the Agricultural Research Organization and an urban farmer,says local farmers in the region are struggling.

“Livestock farmers were equally hit last season, because there was not enough fodder feed for animals,” shesays. “Almost 80 percent of the maize planted last season failed, but there were a lot of residues. Farmers do not know that the leftovers can be a source of feed, especially for these animals during long droughts.” 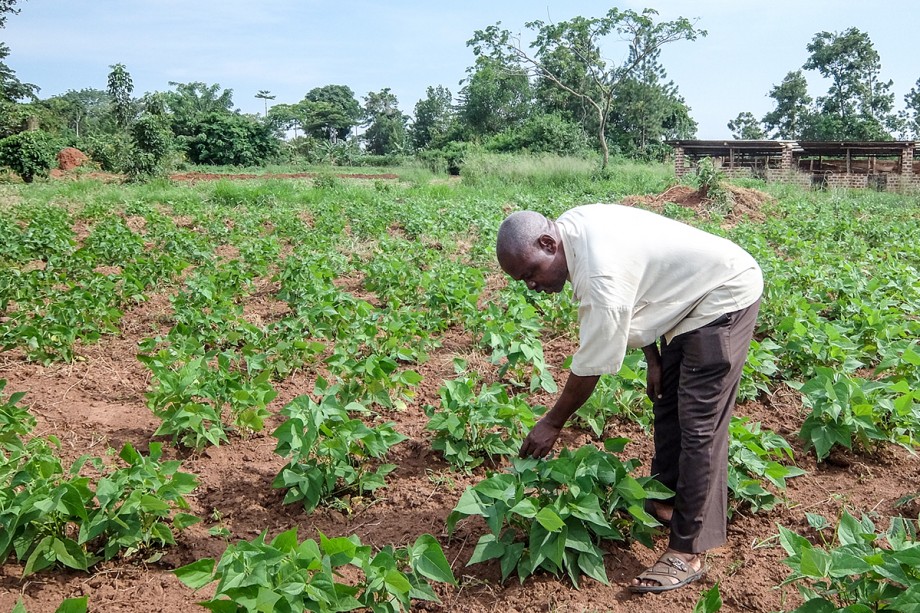 Tabalamule says the ministry offers tools and training to help farmers adopt practices such as plantingtrees, which help to restore soil fertility and create wood to be used as a fuel source; using catchment strips in areas where no crops are planted,in order to capture rain water and redirect it to crop areas; and other soil-management practices, such as using long grasses and shrubs to protect soil and crops from erosion.

“The technologies are easy to take up, and the results are visible within a season,” Tabalamule says.“ They do not require technical competence but are rather hands-on. Despite the fact that most farmers in Uganda are illiterate, they should learn these technologies and their benefits.”

He says local farmers form groups where professionals trained by the ministry, such as Nsubuga, offer hands-on field training that includes follow-up to monitor progress.

“This is my third year as a farmer, and I can testify that smart farming is very different from conventional agriculture,” Nsubuga says.

Using smart-farming methods has helped him earn a solid income that he uses to support his whole family, while other farmers are losing crops and money because of climate change.

“Through farming I have been able to look after my siblings: I pay my sister’s tuition at the university and my younger siblings’ [tuition] in secondary school.There is a difference, and others are able to notice it when it comes to my harvest,” he says.

In Uganda, which has been called the breadbasket of East Africa, “No Ugandanshould go hungry,” says urban farmer Diana Nambatya Nsubuga, who is not related to Hudson Nsubuga.

“We need to get out of the seasons mentality,” she says, adding that other countries with less ideal climates have stronger agriculture sectors.“Uganda has a Mediterranean climate, and yet we are still talking this language of seasons.”

She says learning smart-farming techniques made her farm more profitable.

“On my farm, we do not know weather restraints,” she says. “The game-changer was in adopting technology. I encourage more households to adopt this in order to save.”

No sources in this story are related.