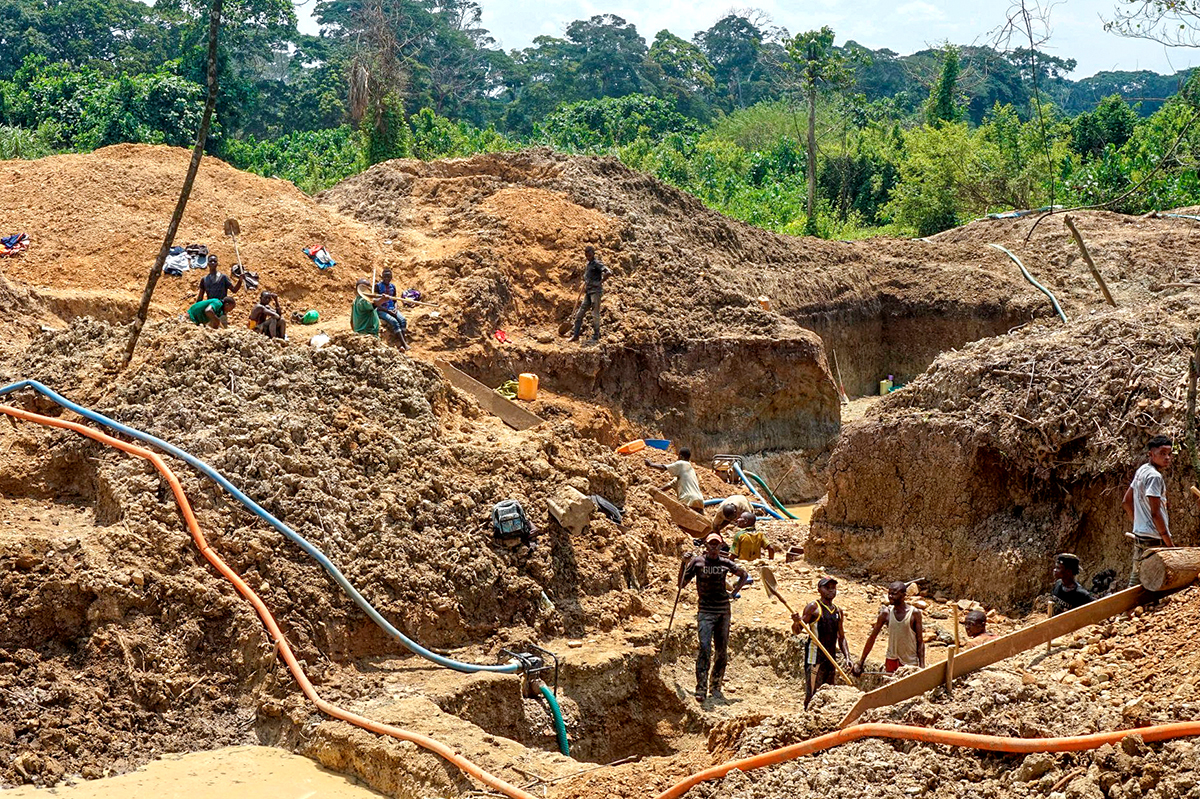 BASILI, DEMOCRATIC REPUBLIC OF CONGO — The banks of the Ituri River are turned inside out in this isolated community. Men and women scramble across the dirt, searching for the treasure beneath the soil: gold.

At first, the discovery led to a frenzied free-for-all, but the mining zone was quickly organized into a cooperative, with safety equipment and regulations barring child labor.

The result? Satisfying work for those up to the challenge. That’s a rarity, particularly in this part of DRC, where subsistence living is the standard.

“A job is a prerequisite for the value of a man,” says Jean Pierre Singoma, a miner who works at the site. 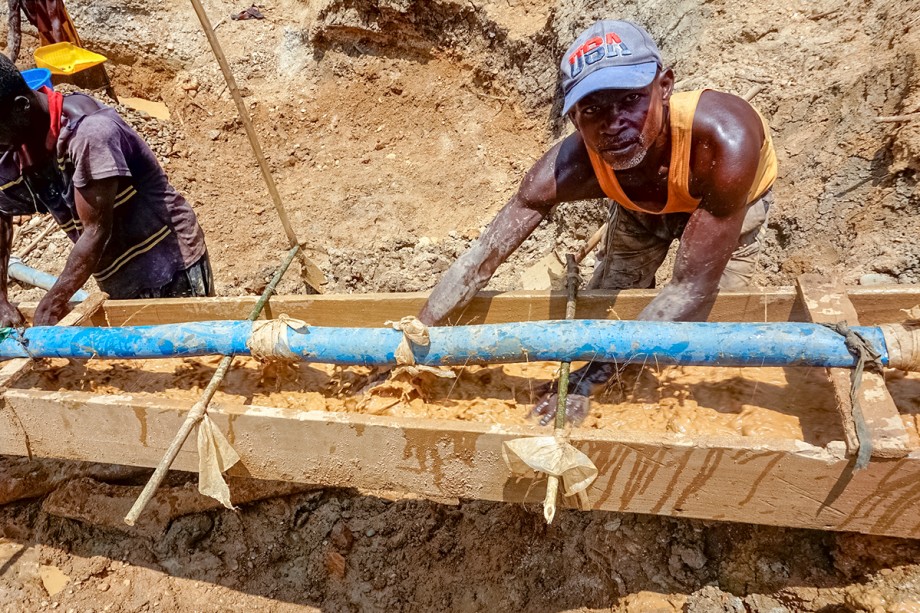 Jean Pierre Singoma says he sends up to $50 each week from his earnings at the gold mine to his wife and four children. “A job is a prerequisite for the value of a man,” he says.

Gold has been mined in this isolated region for generations. The Congolese government created its own mining operations and invited foreign investors to mine here. Artisanal miners also arrived.

War spread through the region between 1998 and 2003. Uganda, which occupied Ituri province for part of that time, took much of the gold in the area.

The Congolese government has gradually nationalized the gold industry in the province. Mining is regulated by national law, but those regulations are rarely respected. It’s common for mining areas to be controlled by armed Mai Mai groups, which operate throughout this region, often with the aim of controlling geographic areas or natural resources.

It’s particularly remarkable that the mine in Basili is controlled by locals. According to a database maintained by the International Peace Information Service, a Belgium-based independent research institute, dozens of mines in Ituri province alone are or have been controlled by Mai Mai groups.

Jean-Claude Muhuni, one of the mine’s senior managers, was among the group that discovered gold at the site.

“We had to travel all over trying to find potential places to sample and dig for gold to no avail, but [we] never lost heart,” Muhuni says. “It was just the luck of the draw that we ended up stumbling upon an unexpected gold deposit.”

That was in May. Within months, Muhuni and the rest of that original group created a structure for the camp, where 120 people, including nearly two dozen women, work. 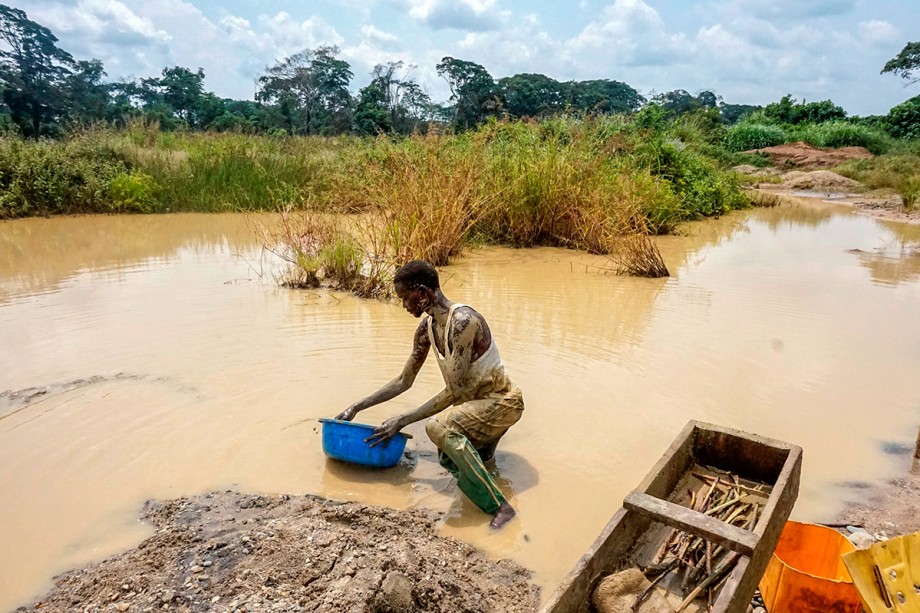 Martin, 18, says he earns $10 each day he works at the gold mine in Basili. (He declined to share his full name.) The mine is managed by local people, an unusual situation in Democratic Republic of Congo, where mines are often controlled by foreign companies or armed groups.

Each miner leases a concession measuring 10 square meters (108 square feet), says Marc Herabo, the camp’s senior manager. Some miners hire other people to work for them or expand their concession by leasing additional land.

Each miner has exclusive rights to anything found in that concession, Herabo says.

The camp also provides helmets for the miners, he adds.

People who work at the camp say it’s marked by the consistent discipline shown by everyone there. There are strictly timed breaks, leaving miners, cooks and other employees with little time for loafing.

Fila Ntombana, a cook at the mine, says her husband, a member of DRC’s military, doesn’t earn enough to support the family.

“My income helps supplement my husband’s pay, and it helps us afford to meet some of our needs,” she says.

Jean Selemani, a local village chief, says the mine has reduced not only unemployment rates, but also crime rates. With more people working honest jobs, the desperation that drives some to crime has subsided. 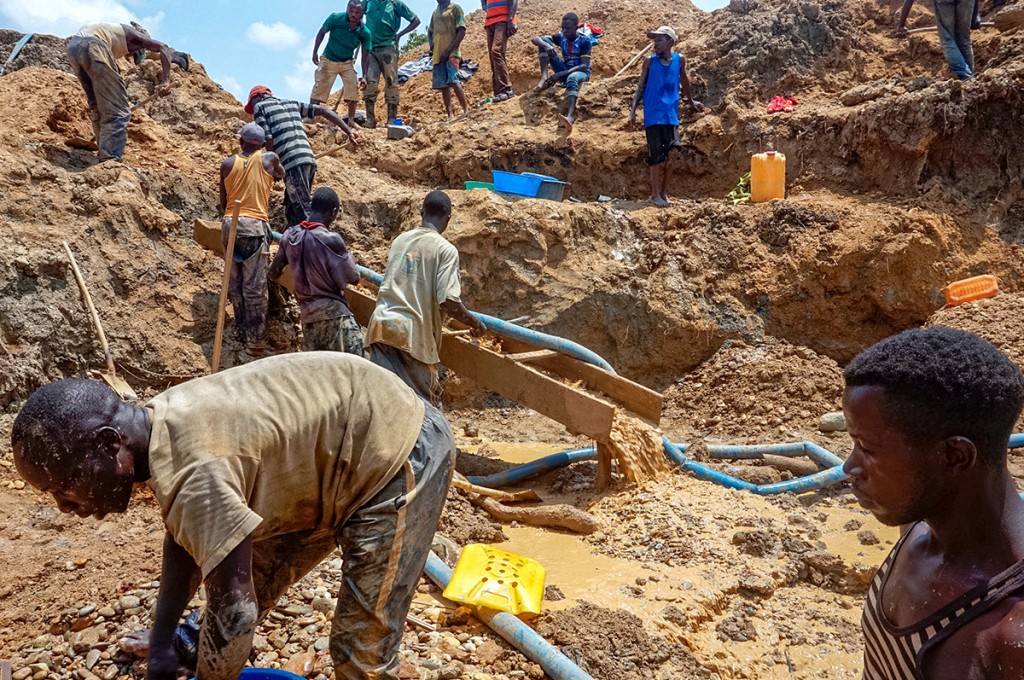 About 120 men and women work at the gold mine in Basili, Democratic Republic of Congo. The work is dangerous, but local people say they’re motivated to continue even without safety equipment in part because local people, not a foreign company or an armed group, controls the mine. 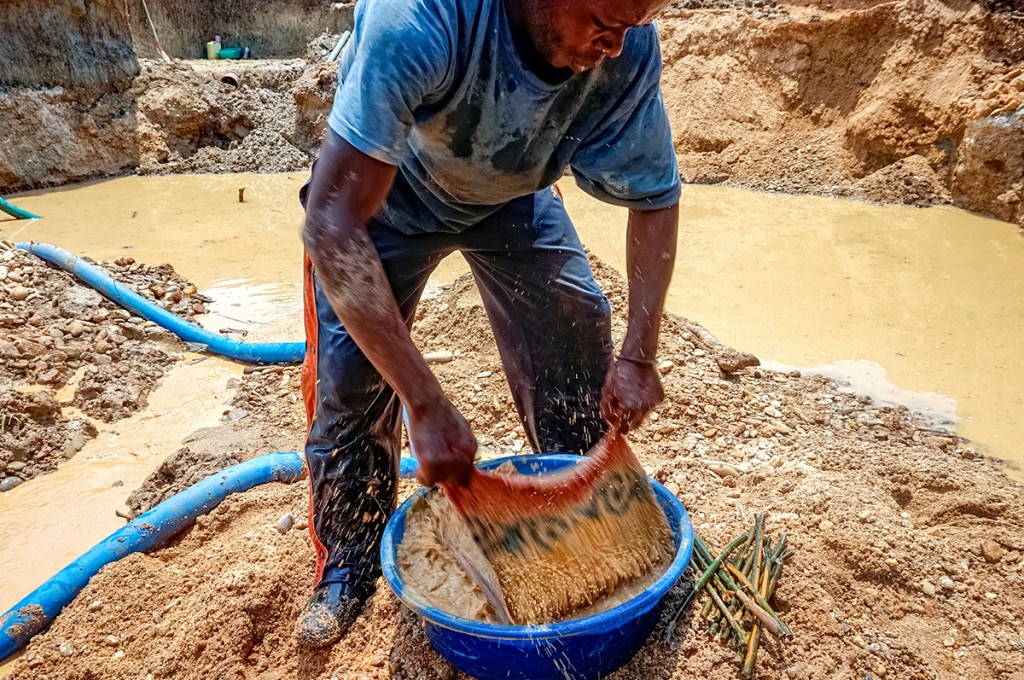 Francois Kambale, a father of five, says he became a gold miner because he couldn’t find another job. He says he earns up to $15 each day at the mine. 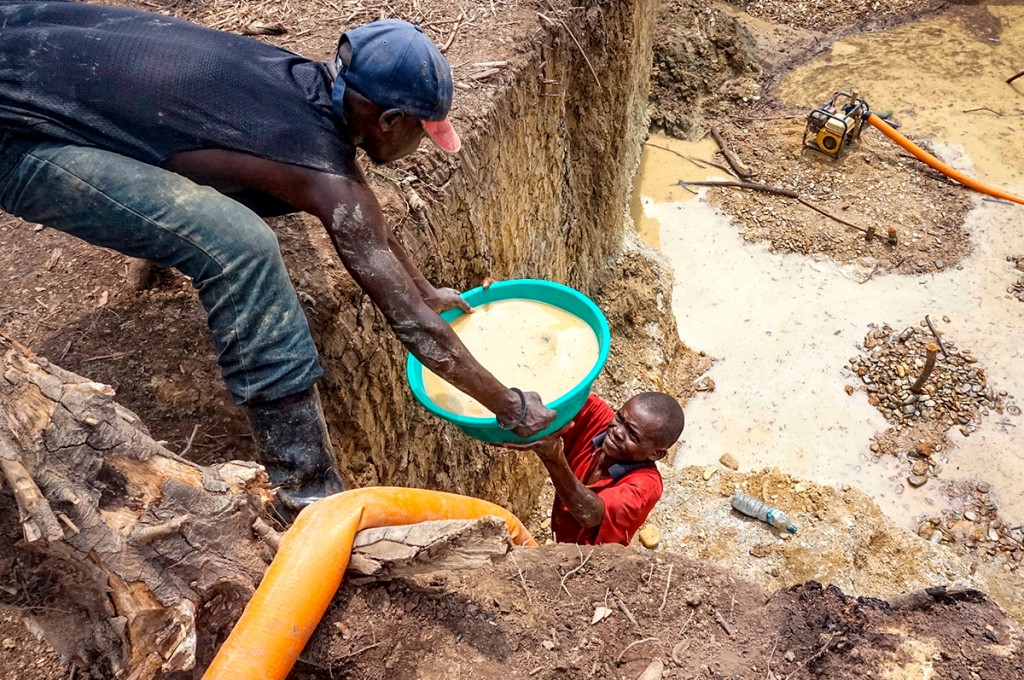 Work at the gold mine in Basili is largely done by hand. Artisanal and small-scale miners in Democratic Republic of Congo rarely have the money needed to buy tools or safety equipment. 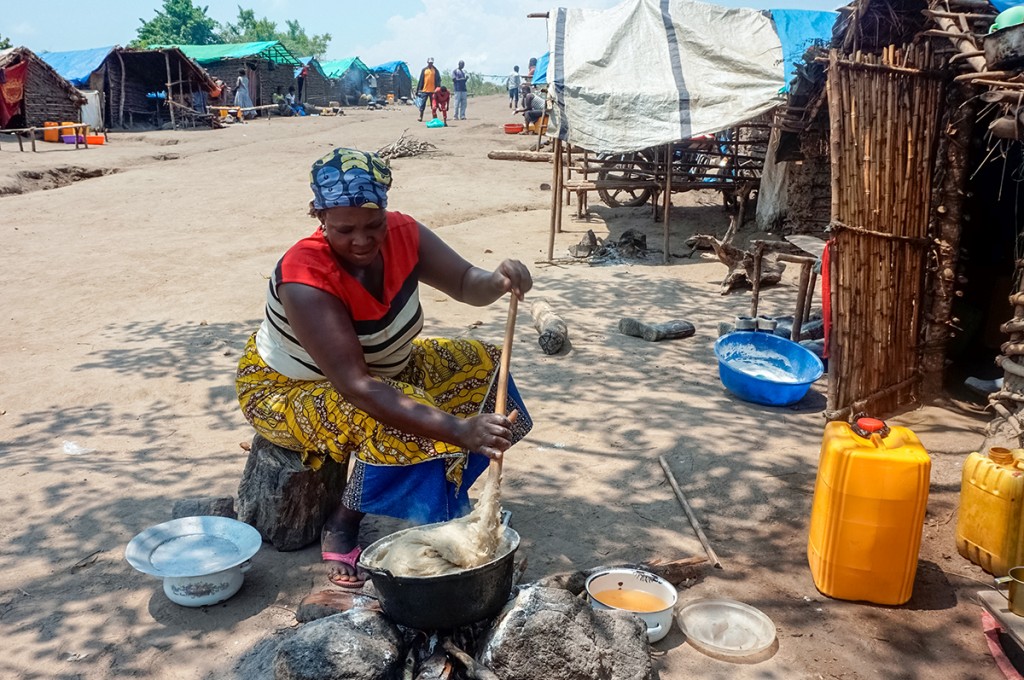 Local women cook for people who work at the gold mine in Basili, Democratic Republic of Congo. 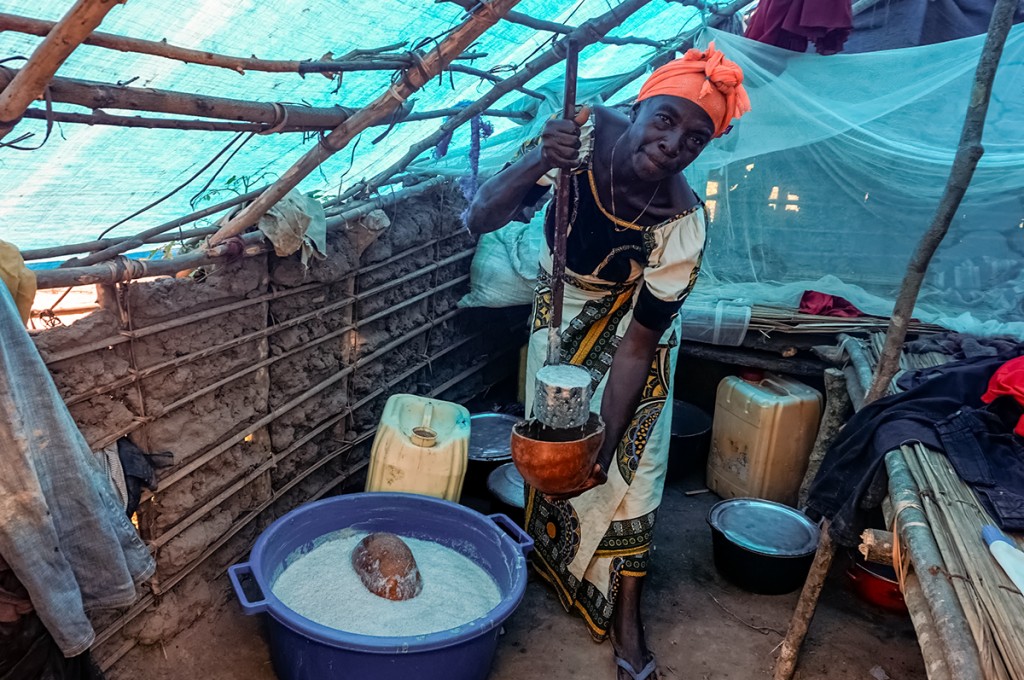 Athanasie Maliyamugu brews mandale, a beer made from maize, near the gold mine in Basili, Democratic Republic of Congo. She sells one portion of mandale for 500 Congolese francs (about 5 cents.) 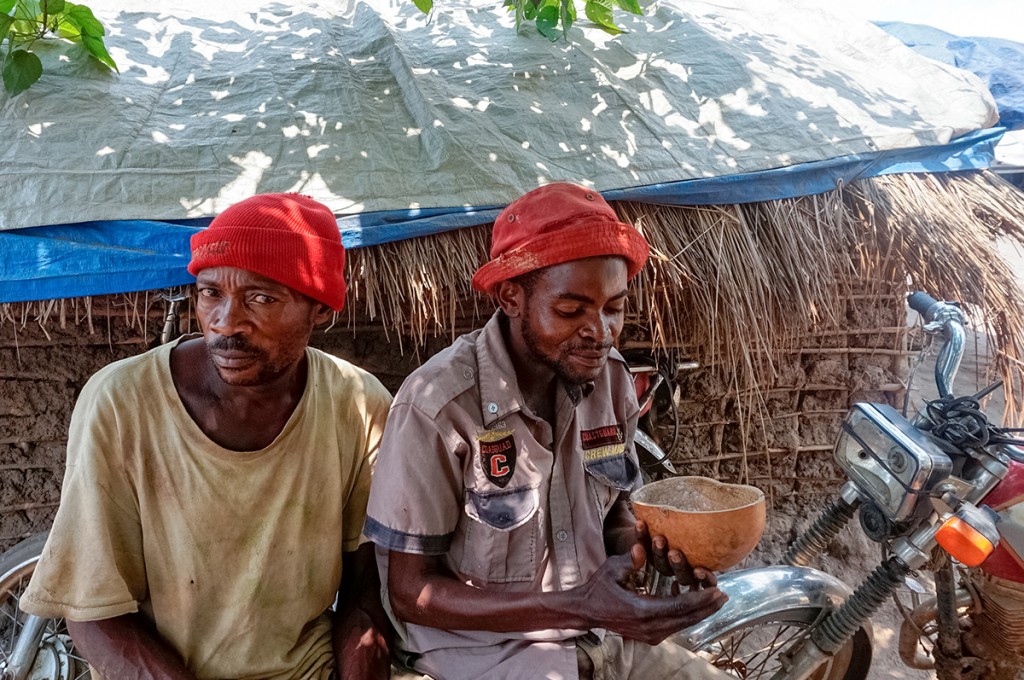 Miners says drinking mandale helps them to regain their strength.

Still, any job that requires digging into the earth is difficult. With mining, there’s the added risk of using mercury, which is nearly always found at artisanal sites.

Mercury, when heated, is often used to extract gold ore from amalgam. Artisanal and small-scale miners often use mercury without appropriate protection, leading them to inhale toxins. Symptoms of mercury poisoning include breathing problems, pneumonia, birth defects and more.

But based on conversations the miners had with GPJ, they’re not aware of those risks.

The gold mine in Basili is right next to the Ituri River and, in some cases, in the river. Mining these alluvial gold deposits can result in serious health and environmental problems.

Mining in rivers can result in the release of silt and heavy metals into the water. River siltation can ultimately cause flooding and deplete fish stocks.

Most miners, though, focus on the more immediate risks. They understand that death is a real possibility when they’re shimmying into tunnels to find gold.

If a miner who leases a concession finds nothing, that risk is for naught, says Franck Tebabo, a miner.

“We’ve invested the money that may end up bringing losses or profits to us, because with this kind of job you never know what will happen,” Tebabo says.