ITURI, DEMOCRATIC REPUBLIC OF CONGO — On a typical day, the village of Fataki would wind down by 7 p.m.: the animals back in their stables, the men at a local pub huddled over a battery-powered radio, the women at home preparing dinner. But those predictable rhythms came to a halt one night in May 2021, as armed men descended on the village, setting fire to mud houses and murdering the people who lived in them.

Esther Wabiwa fled Fataki that night, along with her husband and two young children. They stumbled through the bush for three days, spending their nights sleeping fitfully on wet leaves. Wabiwa, pregnant with her third child at the time, was gripped by contractions. The farther they walked, the stronger they grew.

“This isn’t the time,” her husband said, anxious and overwhelmed. “Can’t he wait a bit longer?”

He couldn’t. “His head was already between my thighs,” says Wabiwa, 29. The baby was born in the middle of the night, delivered on bare, wet ground. “I cut the umbilical cord with my own teeth,” she says. “I didn’t have anything else on me.” Then, fearing that rest would cost them their lives, the family walked for another three days.

Located in the northeastern part of the country, Ituri is home to 5.7 million people and, according to a 2022 United Nations estimate, nearly 2 million of them are internally displaced. In the Fataki region, close to the western shores of Lake Albert, much of the recent violence leading to this exodus is attributed to a network of groups known as the Cooperative for the Development of Congo, or CODECO, which claims to protect the interests of the Lendu people, one of several communities living in Ituri. The men who attacked Fataki were allegedly affiliated with CODECO. Tensions between the Lendu and Hema people, typically farmers and herders respectively, have existed since Belgium colonized the region, when rulers gave the latter group preference. While the Hema had access to education and government jobs, the Lendu labored in mines and on plantations. As early as 1911, the Lendu revolted against Hema domination and killed the local Hema chief. Since then, lingering tensions over land, resources — Ituri is rich in minerals, especially gold — and identity have kept the region in a near-constant state of crisis, including one major armed conflict, known as the Ituri War, between 1999 and 2004.

Hundreds of people have been killed in militia attacks in recent years. Between Dec. 1, 2021, and March 7, 2022, 458 civilians, including 82 women and 48 children, were killed, and 142 civilians, including nine women and 24 children, were injured. But these estimates fail to capture the full scale of suffering in the region, including the deaths that take place long after the attackers withdraw. Wabiwa and her family — her husband, 4-year-old, 2-year-old and infant — managed to escape death at the hands of the men who destroyed their village, but by the time they reached the relative safety of Bunia, the capital of Ituri province, they were weak from hunger and exhaustion. A week later, the baby passed away. “He didn’t survive because he had pneumonia,” Wabiwa says, her eyes wet. “It’s a miracle I survived, given what I went through.” 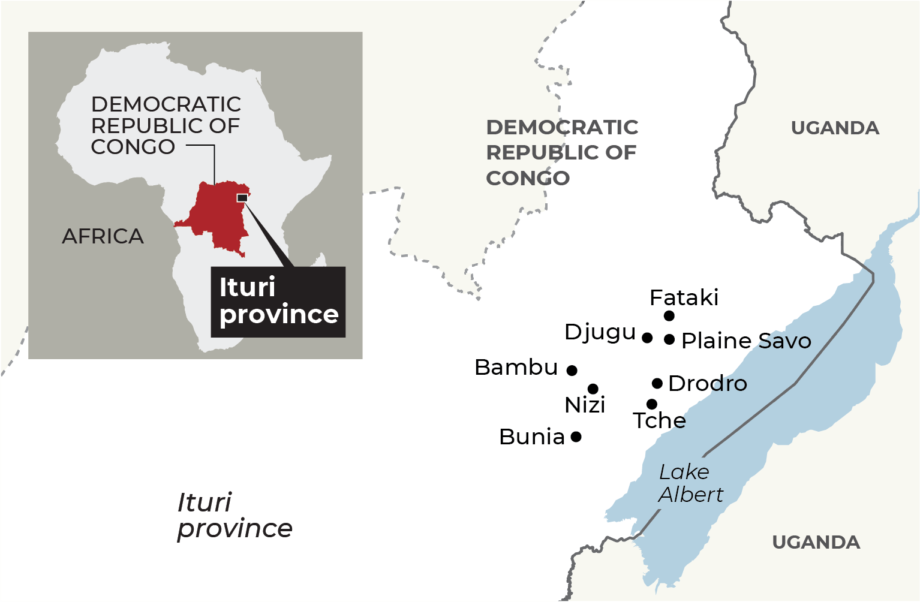 Amid the pervasive violence, it’s difficult for pregnant women to access health care. Those who make it to Bunia from surrounding areas are often in critical condition, says Sister Immaculé Pashango, a nurse at the Muzi Maria health center in the provincial capital. “The difficulty in accessing care compromises the normal evolution of the pregnancy and endangers the infant’s life. We are often faced with difficult cases that require surgery.”

Since the beginning of the year, five women and 16 babies at the camp in Bunia have died, says camp president Albert Mujana Kaloji. “This is all a consequence of the war,” he says. “If we could go back to our villages, life would be easier. Our wives and children would be healthy.”

Patience Zebi, 46, who fled her village of Drodro in June 2021 and has been living in the camp since, lost two children to diarrhea and malnutrition last year. “Even if we were able to escape the slaughter, the life we are leading here is slowly killing us,” she says. “I have already lost two children, and I am afraid of losing more.” Nearly 3 million people in Ituri faced crisis levels of food insecurity between September and December last year. Hunger, however, is no longer the only concern at camps. In February this year, 50 displaced people, including women and children, were killed by machete-wielding militia members at Plaine Savo, an IDP camp in the territory of Djugu. Three months earlier, 44 people were killed in an attack on the displacement sites of Drodro and Tche in the same region.

Outside of Bunia, access to reproductive, maternal and child health care is even more dire. Midwife Florence Kave, 43, chose to stay in Djugu, where violence is especially pronounced. “I couldn’t run away knowing patients, especially pregnant women, would be left on their own,” she says over the phone. “If I am to die, it will be here with my patients.”

An armed group destroyed the clinic where she works. Every day, she goes to work in plain clothes to avoid being targeted. Attacks on health care workers and facilities have increased in recent years, according to Ituri’s provincial health division. Between June 2019 and May 2020, 79 health facilities were damaged or looted in nine of Ituri’s 36 health zones. In 2021, at least 127 health facilities and health workers were attacked across the country. In March this year, five months after unidentified armed men fired on its convoy in Ituri, Doctors Without Borders, an international humanitarian and medical organization, announced that it would halt its projects in Nizi and Bambu, 50 kilometers (31 miles) and 58 kilometers (36 miles) from Djugu respectively, citing a lack of security guarantees from all parties. Doctors Without Borders didn’t respond to requests for comment. 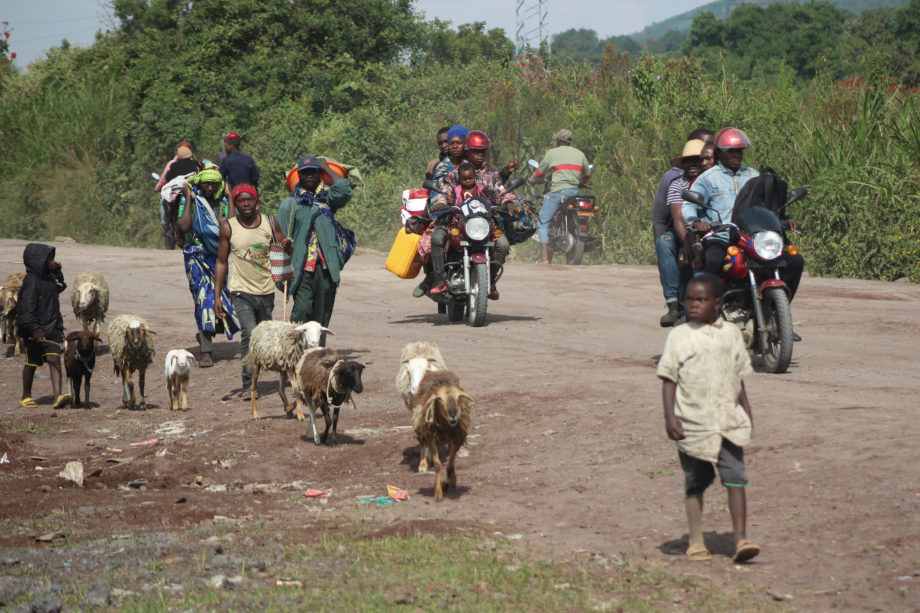 Civilians flee fighting this June in the town of Kibumba, about 30 kilometers (18 miles) north of the city of Goma. 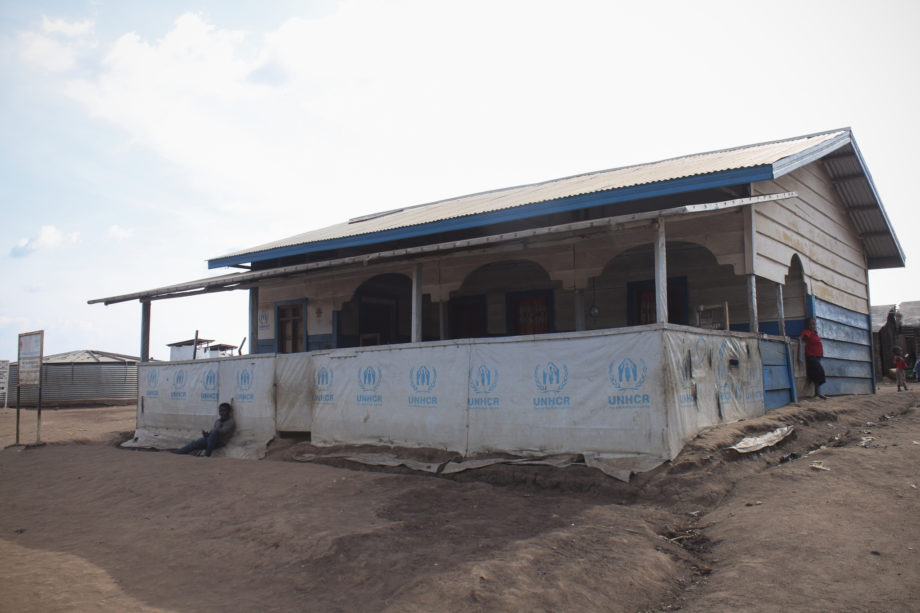 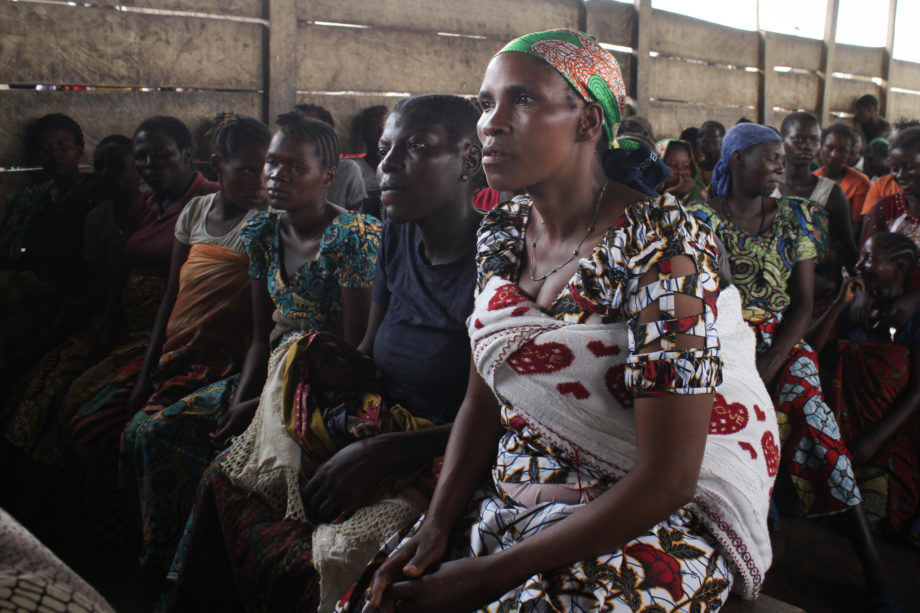 Pregnant women and new mothers wait to receive supplies from the health center in a camp for internally displaced people in Bunia.

At the destroyed clinic where Kave works, makeshift tents accommodate women about to give birth. “We have no equipment — my only instruments are a razor blade and gloves. Women give birth on the floor,” she says. “In a month, I have already lost four women who should have, but couldn’t be, transferred.”

At the camp in Bunia, Brigitte Mave, 31, has just given birth. Her delivery went smoothly, but she remains worried. “I can’t breastfeed my baby properly because I don’t have enough breast milk,” she says, “because I don’t have enough to eat.” A small woman, shy and soft-spoken, Mave left Bambu village after it was attacked, allegedly by CODECO, and has been living at the camp for a year. She only smiles when she looks at her baby, but that smile quickly fades when she thinks about the challenge of raising him amid war. 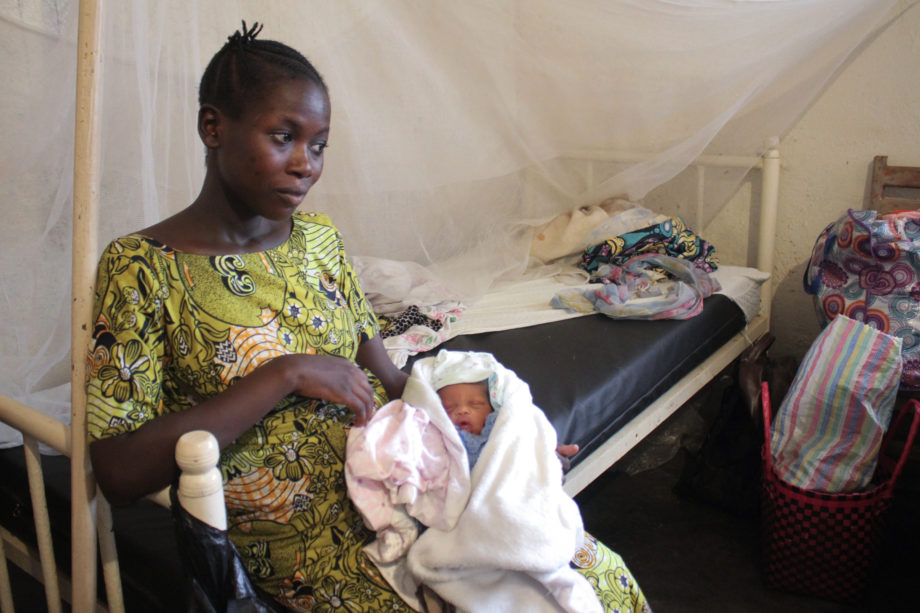 Brigitte Mave holds her newborn at the health center in a camp for internally displaced people in Bunia. She says she worries about not having enough food to be able to breastfeed her baby.

Ituri, alongside neighboring province North Kivu, has been under martial law since May 2021, but locals say the violence has not let up. “We ask the population to continue to believe in the actions of the army, to trust and to collaborate with us,” says Lt. Jules Ngongo, army spokesman in Ituri. “We are doing everything to restore the authority of the state.”

Wabiwa, due to give birth to another child — whose first home will be the camp in Bunia — can’t bring herself to be hopeful. “I think we are destined to suffer for the rest of our lives because I no longer believe what the authorities say,” she says. “My country is no longer a safe place for us women giving life.”