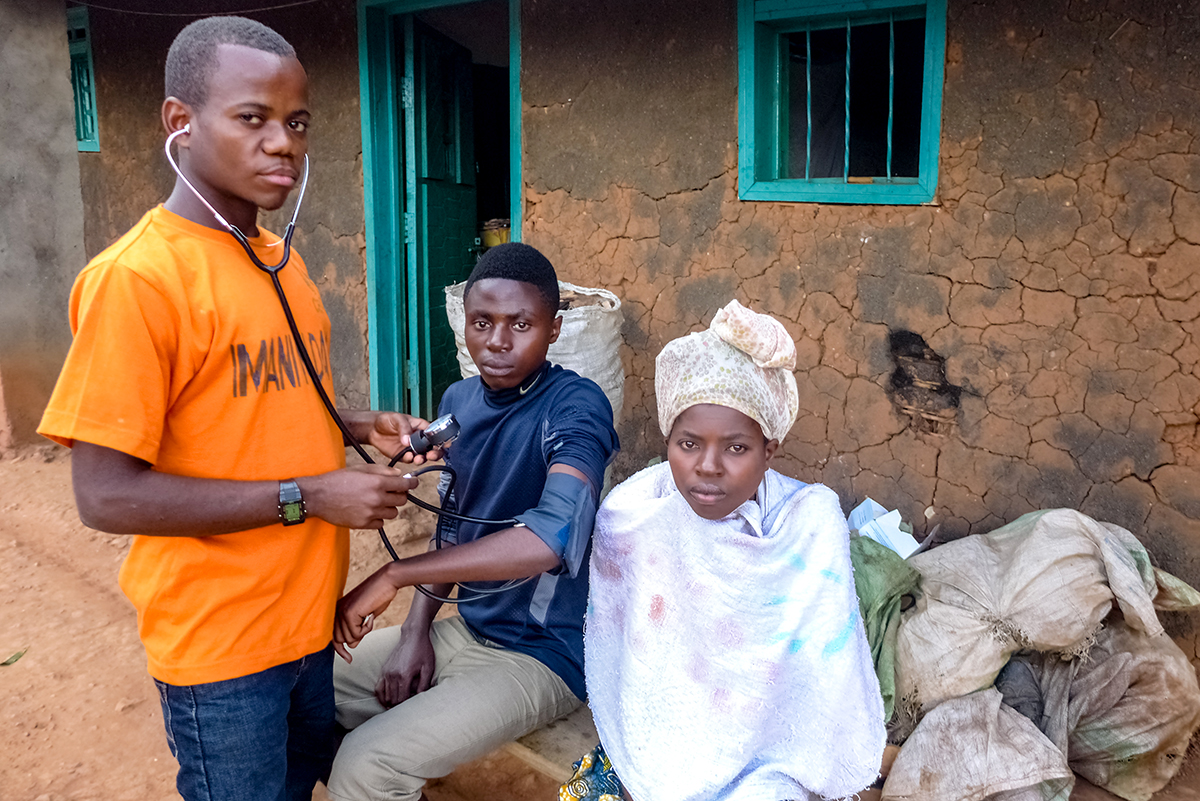 KIRUMBA, DEMOCRATIC REPUBLIC OF CONGO — At sunrise each day, women here shoulder their hoes and head to the fields.

They spend their mornings pulling weeds from fields of corn and beans. The work is communal; the women don’t just stick to their own plots but help each other to get the work done faster. When break time comes, they sit together to talk.

Today, the conversation is dominated by a single topic: the difficulties several women in the group are having getting pregnant.

Throughout DRC, when a couple has difficulty conceiving, it is often blamed on the woman – or on witchcraft.

Many marriages are ruined when children don’t come quickly, says Betiseba Kavira, who owns the field where the group of 10 women were taking their break. Kavira had her own problems conceiving a second time, she says.

“Twelve years had passed without me being able to get another baby after my eldest daughter’s birth. But, as you can see, I’m pregnant again,” she says enthusiastically, looking down at her belly.

Kavira has an explanation as to why it took her so long to get pregnant the second time around: She was bewitched by women who were interested in her husband, she says. She sought treatment at a local hospital, but nothing seemed to help break what she thought was a curse.

“I went to the hospital, but nothing was done to help me,” she says. “It wasn’t until I met a traditional healer that I was successful.” 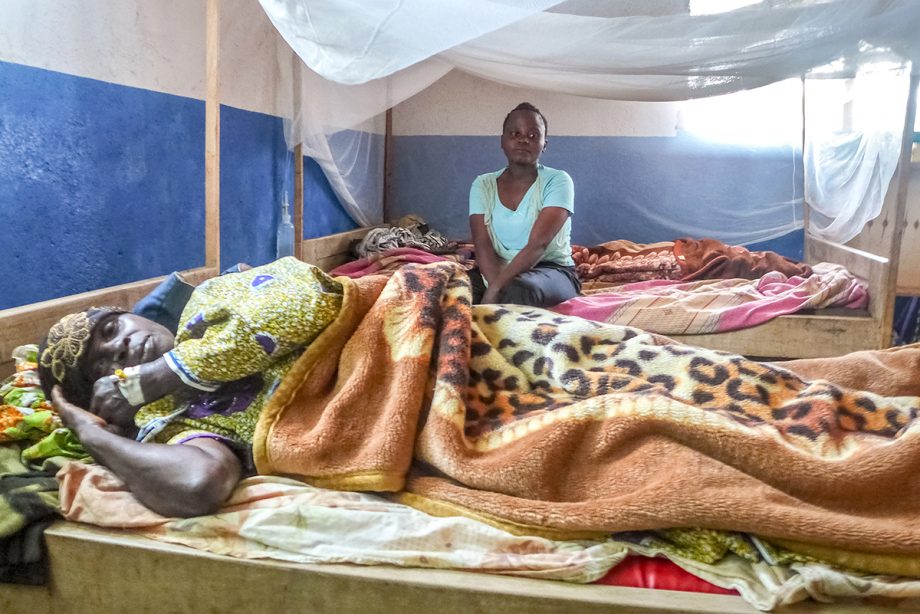 Women often come to the Centre de Santé Vulinda, a health center in the conflict-ridden area of Kirumba in search of treatment for uterine fibroids. The diagnosis is common, despite the center not having modern diagnostic equipment.

Health care options are limited here. Women often rely on traditional remedies for reproductive health issues. In the absence of diagnostic technologies and trained doctors, local women have few options for seeking care and treatment. Many point to the ongoing regional conflict as the primary reason the country’s health-care system hasn’t improved in decades.

Over the last 30 years, the political and economic situation in DRC has worsened, with significant implications for health care. According to a 2012 UNDP report, reproductive health issues were a leading cause of death for women in DRC.

Magy Katungu, 28, is unsatisfied with any of her available health care options. Out in the field during their break, she confides in the group that she feels lower-abdominal pain during sex with her husband.

Members of the group have a handful of suggestions. One suggests that she boil leaves of the millefeuille plant, also known as yarrow, and then sit over the steaming liquid in the morning and the evening.

Several other women endorse the remedy.

But Katungu says she is unconvinced. She believes that women here lack access to reliable information and diagnoses for their reproductive health. She wants to see a specialist. She wants a confirmed diagnosis.

But that’s not likely to happen, says Jacques Kamate Sikihimba is a nurse at the Centre de Santé Vulinda, a health center in the conflict-ridden area of Kirumba, a locale where armed groups operate north of North Kivu’s provincial capital of Goma. He says women frequently come to the health center for reproductive-health problems, but the clinic does not employ any specialists, and it lacks diagnostic equipment, even though the clinic is the only one of its kind here.

He says often their only option is to refer patients to the HEAL Africa, a well-equipped hospital in Goma, which is 107 kilometers (66 miles) away. Plus, the insecurity in the region forces citizens to travel via United Nations convoy to reach Goma safely.

Dr. Coleen Kivlahan, a specialist with Physicians for Human Rights, agrees. She’s working as a medical adviser and trainer for a program on sexual violence in conflict zones. She is also the senior director for health systems innovation at the Association of American Medical Colleges.

According to a 2012 UNDP report, reproductive health issues were a leading cause of death for women in DRC.

Doctors in rural DRC “are working in incredibly difficult circumstances,” she says. “They’re having to diagnose things with their hands, because they don’t have ultrasounds or CT scans or MRIs. They’re making their educated guess based on what they feel and what they see.”

As a result, misdiagnosis is common.

“It’s not like they have access to the New England Journal [of Medicine],” she says. “It’s not just about conflict; it’s about poverty. So what we know is that, again, in most conflict or poor settings, we make diagnoses based on patterns of injuries or conditions.”

Emeline Kahindo, 27, was diagnosed with uterine fibroids, noncancerous growths that often appear during childbearing years, at a local hospital last year. Like Katungu, she felt pain in her lower abdomen during sex.

“Each time, I felt pain in my lower-abdomen area. I was told I had uterine fibroids when I went to the hospital,” Kahindo says.

But Kivlahan says uterine fibroids are particularly difficult to diagnose in DRC because they require more advanced equipment. In recent years, many women here have been mistakenly diagnosed with uterine fibroids.

“During prolonged conflict like in [DRC] inadequate equipment contributes to the problems,” Kivlahan says of the challenges in diagnosing reproductive health issues.

But there are other challenges too.

There will never be improved diagnosis or treatment if trained doctors can’t find employment in DRC, says Dr. Didier Butara, who recently completed a year in France studying public health.

He says he returned home to DRC to apply the skills he learned in France. But there is one major hurdle in his path — the lack of paying jobs for trained doctors.

“I want to use my skills and knowledge acquired in France for my motherland,” he says. “Unfortunately, there is no way I can do it, because I can’t even land a job, because the whole system is crippled.”

But for local women, struggling with abdominal pain and, often, the resulting inability to conceive, there is often little they can do, even if they receive an accurate diagnosis.

Solange Kavugho, 30, who works at a typing service, says she began to feel pain in her lower abdomen in 2013.  But when she was diagnosed with fibroids, she says she couldn’t afford the treatment that local doctors suggested.

“I sought medical help everywhere in Kirumba, but my ailment didn’t go away,” she says. “With each passing day, my suffering is increasing. A doctor advised me to seek treatment in Uganda, but I’m too poor to afford treatment there.”

For others, having the recommended surgeries didn’t yield any relief.

“To my surprise, my pain came back again. When I sought medical help again from my doctor, he advised me to see a specialist. But I am too poor to travel to find one,” Mali says. “Some of my friends say the removal of my uterus will be my only cure. But I’ve no more faith left to rely on.”