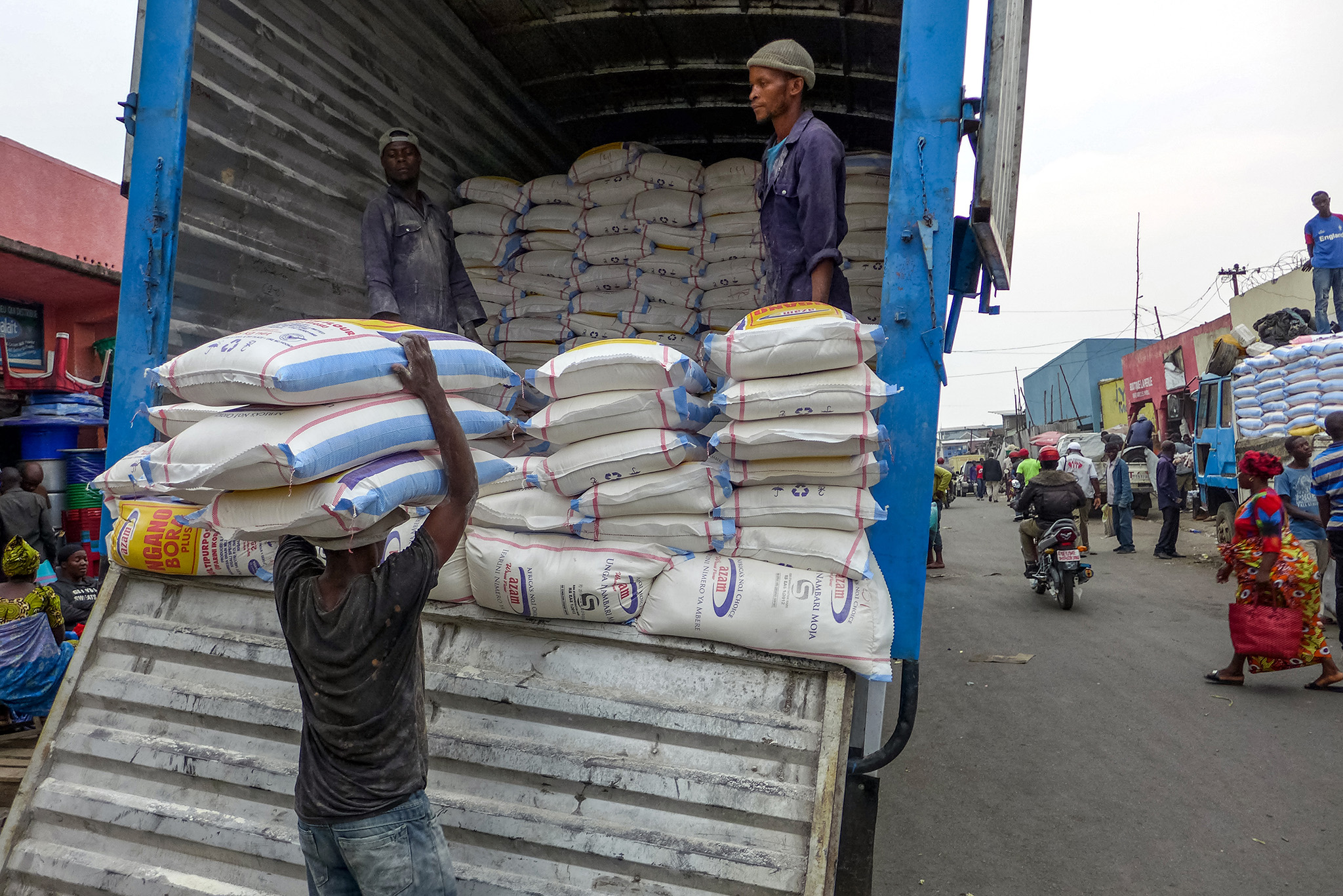 Pulsing with the energy and voices of traders, transporters, truckers, drivers and buyers, this is where everyone comes to buy food.

Among them is Pierrete Kahindo, 38, a stay-at-home mother here to buy corn flour for fufu – a pasty dish that goes with fish and sauce – and porridge for her family of eight.

Corn flour was once a cheap staple, and Kahindo bought plenty on her food budget of about 183,000 Congolese francs ($100) per month. But in recent months, the price has doubled, leaving her and millions of others short of one of the country’s most important foods.

DRC imports corn flour from neighboring Uganda, which is tangled in an ongoing dispute with Rwanda. As a result, Rwanda, which also borders DRC, won’t let Ugandan goods into its territory. Import routes into DRC are now longer and less secure, which has led to skyrocketing prices for many goods and food products – including corn flour. 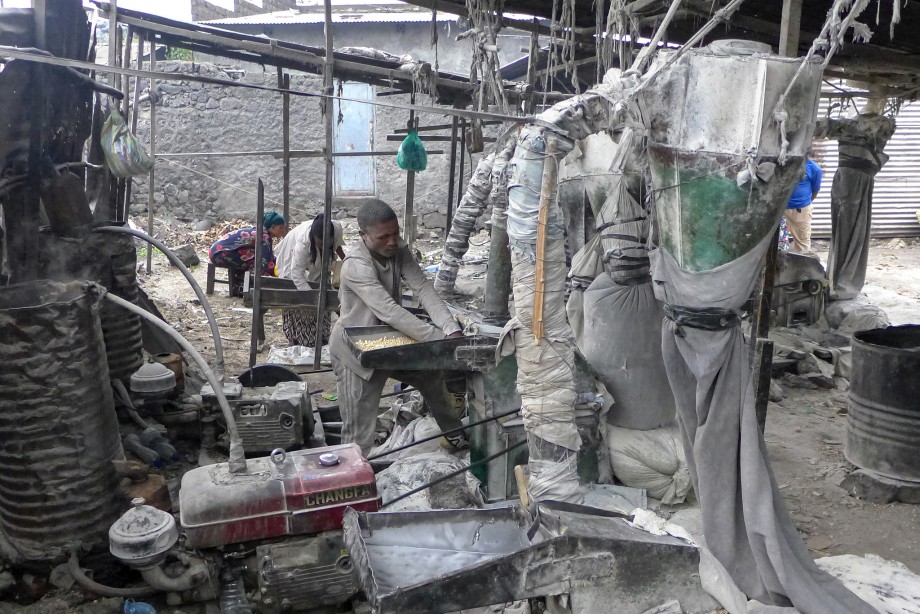 Jeremi Dunia works in one of the older mills in Goma, which are indispensable for families who can’t afford quality, well-packaged flour from Uganda.

These issues speak to a larger crisis in the Congolese agricultural sector, which faces a slew of technical, economic and institutional challenges. And the coronavirus crisis will likely deepen DRC’s struggles, impacting commodity exports, siphoning foreign exchange reserves and blunting overall economic growth. As of June 27, DRC had 6,690 confirmed cases of COVID-19, the disease caused by the coronavirus, and 153 deaths.

A nation rich in resources was already buckling under food shortages. Now imports may cost even more.

“But why should a country like DRC be troubled by the import of corn flour while it has the resources to feed its population well at low prices?” asks Alain Kikandi Kiuma, dean of the University of Goma’s Faculty of Economics and Management.

It’s a question on the lips of many Congolese, as DRC spends nearly $1.5 billion on food imports each year. Yet, according to the National Agency for the Promotion of Investments, DRC’s abundant fertile soil, tropical climate and other advantages should allow it to feed 2 billion people through intensive farming.

“Usually, a 25-kilogram bag of corn [flour] would sell for less than $10, if our country didn’t depend on imports,” Kiuma says. “And each family could readily afford to buy it.”

Instead, farmers rely on small family plots and are generally engaged in subsistence agriculture, unable to boost productivity.

“We practice family farming, that is to say, everyone produces to feed their family, but not to feed others,” Kiuma says. 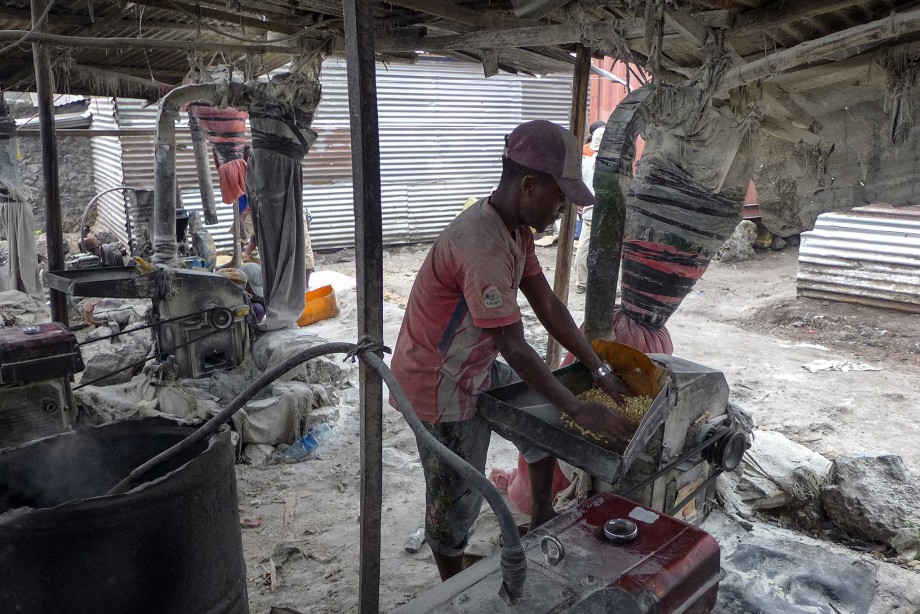 Papy Nkulu works at a mill and repairs the machines and generator when they malfunction. Every day he receives maize to grind and earns 200 Congolese francs ($0.10) per kilogram.

Corruption and insecurity are major obstacles to farming in general and the agriculture sector in particular, experts say. Those challenges strangle production of a variety of crops, including corn. Farmers cultivate only 25 million of the nation’s 198 million acres of fertile land.

“Corrupt and opportunistic individuals who want power and control over natural resources, especially minerals, for personal enrichment, are causing conflict,” says Joseph Kyembwa, a sociologist and researcher. “Armed groups financed by such individuals are emerging every day and creating insecurity, especially in the eastern part of DR Congo.”

This is the case for Yvonne Nyasheya, a 38-year-old mother of five, including twins, who has lived in Goma since 2008.

In her home village, in Masisi territory, about 80 kilometers (50 miles) northwest of Goma, she and her husband owned 5 acres, where they grew beans and corn. Each harvest season, she says, armed groups stole their crops.

“Although rebels are no longer frequent,” Nyasheya says, “we’ve lost the courage to return there and work in our fields, because of the ongoing land conflicts.”

Insecurity on roads also cripples transport of food products from villages to the city. On the 68-kilometer (42-mile) journey from the town of Rutshuru to Goma, for example, drivers must endure at least 15 informal roadblocks manned by bands of armed men, who identify themselves as security officers. Drivers must pay $5 to $10 at each roadblock to buy safety.

“Roads really are completely impassable,” says Adolphe Senga, a truck driver for 10 years. “But we’re trying to do the best we can to bring our goods here in the city. What troubles us most are the roadblocks that arise every day, and which affect the price of corn once on the market.”

The provincial minister of environment, Walter Ngendja, says the central government does not have the means to develop the agricultural sector.

“Our government depends on the help of international organizations,” he says, “whose assistance is not sufficient to bring agriculture to a level where it can feed the entire population of the country.”

Efforts to reach the provincial minister of agriculture were unsuccessful.

Jules Muhavuli, an economist who lives in Goma, says DRC should follow the example of Uganda, which he praises for prioritizing agriculture. More than half of Uganda’s exports come from that sector.

“Make me a good policy,” Muhavuli says, “and I’ll make you a good economy.”

Coming next week: How has the coronavirus impacted the lives of people who rely on one of the world’s busiest borders for their livelihoods?