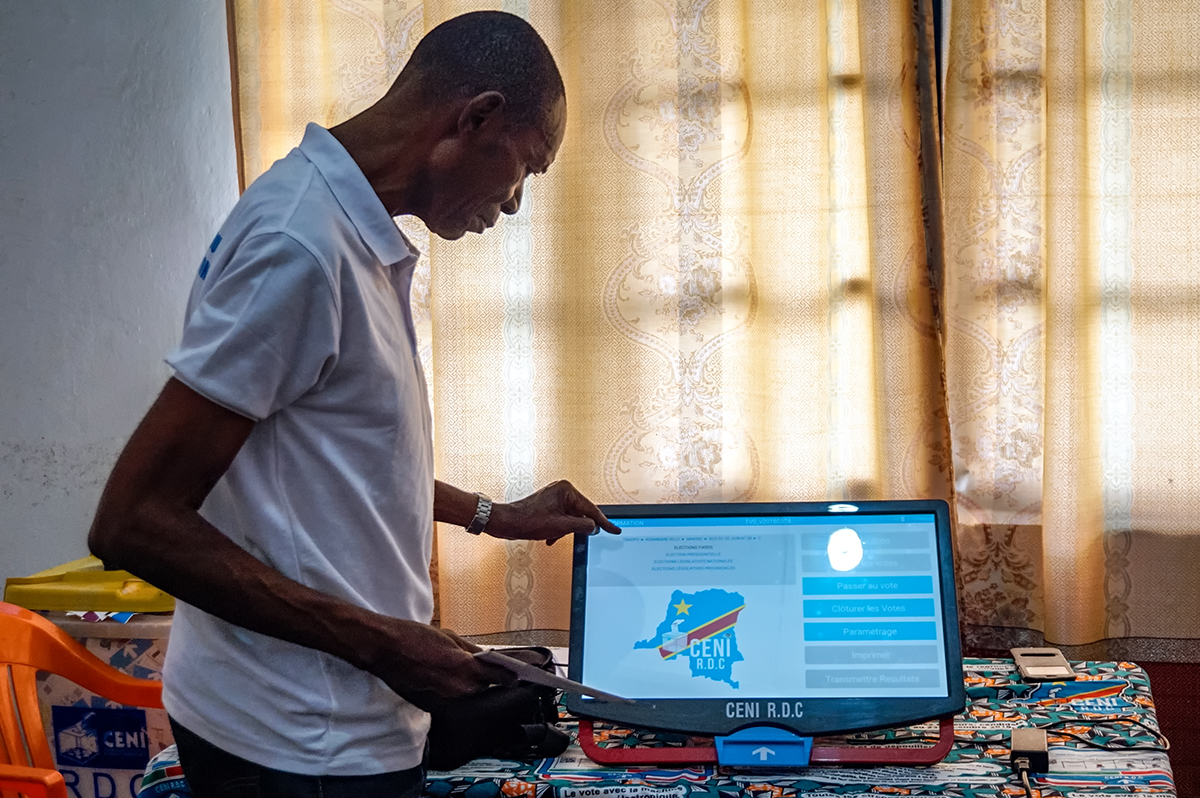 UPDATE: CENI, DRC’s elections authority, announced on Thursday that the election, originally scheduled for Dec. 23, would be postponed until Dec. 30.

KISANGANI, DEMOCRATIC REPUBLIC OF CONGO — On December 23, voters across this vast, sporadically connected central African country will cast votes in a historic election, and officials say all the votes will be counted within 24 hours.

That’s because voters will, for the first time in DRC’s history, cast their ballots electronically.

Representatives from the Commission Électorale Nationale Indépendante (CENI), known in English as the Independent National Electoral Commission, say the electronic voting machines will speed up the voting process and ensure transparency. That’s a key concern here, where elections have been postponed since 2016, when President Joseph Kabila was supposed to leave office after 15 years leading the country.

The country’s previous two elections, in 2006 and 2011, were widely viewed by observers as lacking transparency and, in some cases, having fraudulent results. After the 2011 election, The Carter Center, a U.S.-based organization that often serves as an election monitor, concluded that the results weren’t credible. By contrast, that organization’s review found that the 2006 election was flawed but ultimately credible.

Officials at the Electoral Commission say there will be no place for such accusations this year.

“At least 75 percent of the population will know how to use this e-voting machine, which has been introduced to make credible elections possible and speed up the voting process,” says Christophe Limanga Nkolya, an Electoral Commission officer in charge of elections in Kisangani, a key city in DRC’s Tshopo province.

In years past, he says, voters had to look up their names in a paper register – a time-consuming process – before casting a ballot.

CENI officials say the election will go forward, utilizing the machines as planned, even though an estimated 8,000 of the machines were destroyed in a Dec. 13 fire at a warehouse in Kinshasa, DRC’s capital city. Spare machines will be brought in from other parts of the country, according to a CENI statement. The cause of the fire was unknown at the time of publication.

There’s another key reason this election is poised to be historic: Kabila’s name isn’t on the ballot.

The election will proceed as planned even though 8,000 electronic voting machines were destroyed in a Dec. 13 fire at a warehouse in Kinshasa, DRC’s capital city.

Kabila has been in power since his father, the previous president of DRC, was assassinated in 2001. DRC’s constitution requires a president to step down after two consecutive terms, but Kabila has repeatedly delayed elections. It wasn’t certain whether Kabila would allow this year’s scheduled elections to occur until he named Emmanuel Ramazani Shadary, his former interior minister, as his preferred candidate for the presidency. Shadary is under sanctions from the European Union due to human rights abuses that occurred during crackdowns on anti-Kabila protests in 2016 and 2017.

At an October panel event in Washington, D.C., Gérard Bisambu, executive secretary of Acting for Transparent and Appeased Elections, a civil society umbrella group in DRC, said that if Shadary is elected, Kabila is likely to lead the Senate and push for a constitutional amendment to eliminate presidential term limits. Bisambu speculated that Shadary would resign within a year or two, opening the door for Kabila to return to the presidency.

This possibility frustrates those who want to see Kabila and his supporters gone.

“We’ve been waiting for this good opportunity for 17 years now, but opposition parties are still going around in circles instead of concentrating on looking at how well they can take on the ruling regime, which has taken them hostage,” says Jean Sabiti, a civil-society activist.

The truth is, elections in DRC are worth nothing!Jean Pierre Kasibu Awina, a resident of Kisangani

But even the opposition candidates approved to run for the presidency aren’t doing much to garner support, Sabiti says.

“Opposition parties have gone to sleep,” he says.

It’s possible that many voters are avoiding tough conversations, too. Most of the talk in Kisangani is about the voting machines rather than the candidates.

For some, the machines, which resemble touch-screen tablets, represent an exciting change. Bijoux Mokili, a vendor at Kisangani’s central market, says voting will be easy and fast. She calls the change a “tech-savvy” effort to collect ballots.

But many Congolese worry that the machines will make election fraud easier than ever. Some, skeptical of Kabila’s intentions, say the machines are a sure sign that fraud will occur.

Yannick Kalume, a sociology student at the Université de Kisangani, says the machines are “an ingredient for election theft, working in favor of some candidates.”

Opposition parties have gone to sleep.Jean Sabiti, a civil-society activist

Election observers also have questions about the machines, which are made by Miru Systems, a South Korean company. Some analysts believe they’re the same ones that the Argentine government rejected in 2016, after multiple reviews revealed that the system was vulnerable to data manipulation.

The Sentry, an investigative organization linked with The Enough Project, a human rights organization, found that the documents about the machines’ functions that Miru Systems gave the Electoral Commission was likely identical to the documents provided to the Argentine government, the original Spanish simply replaced with French.

Miru Systems’ voting machines were also used in Iraqi parliamentary elections in May. The news organization Al-Jazeera reported that a full recount was ordered and noted that the machines produced what The Sentry called “disparate results” in tests.

Joseph Kabila has been in power since his father, the previous president of DRC, was assassinated in 2001.

Analysis of the Miru Systems machines isn’t all bad. Though people will cast votes on a touch screen, the machine will immediately print a paper ballot which will then be placed in a secure box, says Joseph Lorenzo Hall, chief technologist at the Center for Democracy and Technology, in Washington, D.C. That system creates a paper trail that could be used if a recount is needed, he says.

Despite that benefit, Hall says, the system has significant flaws.

The machines rely on an outdated version of Android, which can allow a hacker to break into the system, replace the software and tamper with the election results, he says. Even people with very little technological know-how can seriously disrupt the election. The machines have USB ports with no clear protection, so anyone can walk up to a machine and insert a USB drive with malware, Hall says.

“As far as I can tell, it’s unclear if poll workers in DRC are going to be trained to know that those USB ports are very sensitive,” Hall says.

He adds that election officials will be sending the machines’ results to election headquarters through 2G and 3G wireless networks, which have been vulnerable to hackers for years.

“There is definitely the prospect of someone intercepting that transmission, cracking it open and putting in whatever they want – or they could even just jam it, so that no one ever gets the results,” Hall says. “It’s unclear that there are any protections that would catch that.”

Perhaps most alarming, each printed ballot will have a unique number sequence – an element designed to prevent voters from casting multiple ballots – but it could put the safety of each voter at risk, says Hall. If a voter can be directly connected to their ballot, it opens the door to vote buying or coercion.

“If you can prove to someone how you voted, they may pay you for it,” Hall says. “We often see cases where a father will say to his son, ‘I want proof of how you voted or you’re not going to get your inheritance.’”

Whether or not ordinary Congolese know specifics about the biometric kits and the voting machines, many are convinced that the process is designed to support Kabila’s candidates.

“This machine is no different from election theft, because I’m sure the Electoral Commission will do its bit to help candidates of the ruling majority win elections,” says Jean Pierre Kasibu Awina, a resident of Kisangani.

The same people win every time, he says.

“The truth is, elections in DRC are worth nothing!” he adds.

Awina’s skepticism, common throughout this city, might keep some voters from casting ballots at all. Joseph Ramazani Lokinga, a civil servant who works in the provincial mines division, says the voting machines are a clue that the election won’t be fair.

“I support opposition candidates, but I’m deeply skeptical about their ability to win because the electronic voting machines can never allow them a win,” he says.

Electoral Commission officials in Kisangani say the machines are a sign of modernity.

“People must stop throwing themselves into a frenzy of speculation swirling around the electronic voting machine, because as technology evolves, so does our world,” says Nkolya the elections officer.

There’s no longer a need to use a “slew of sheets and paper” to hold elections, he says.

Editor’s note: This story has been updated to reflect the number of DRC’s voting machines destroyed in a fire. Global Press Journal regrets the error.