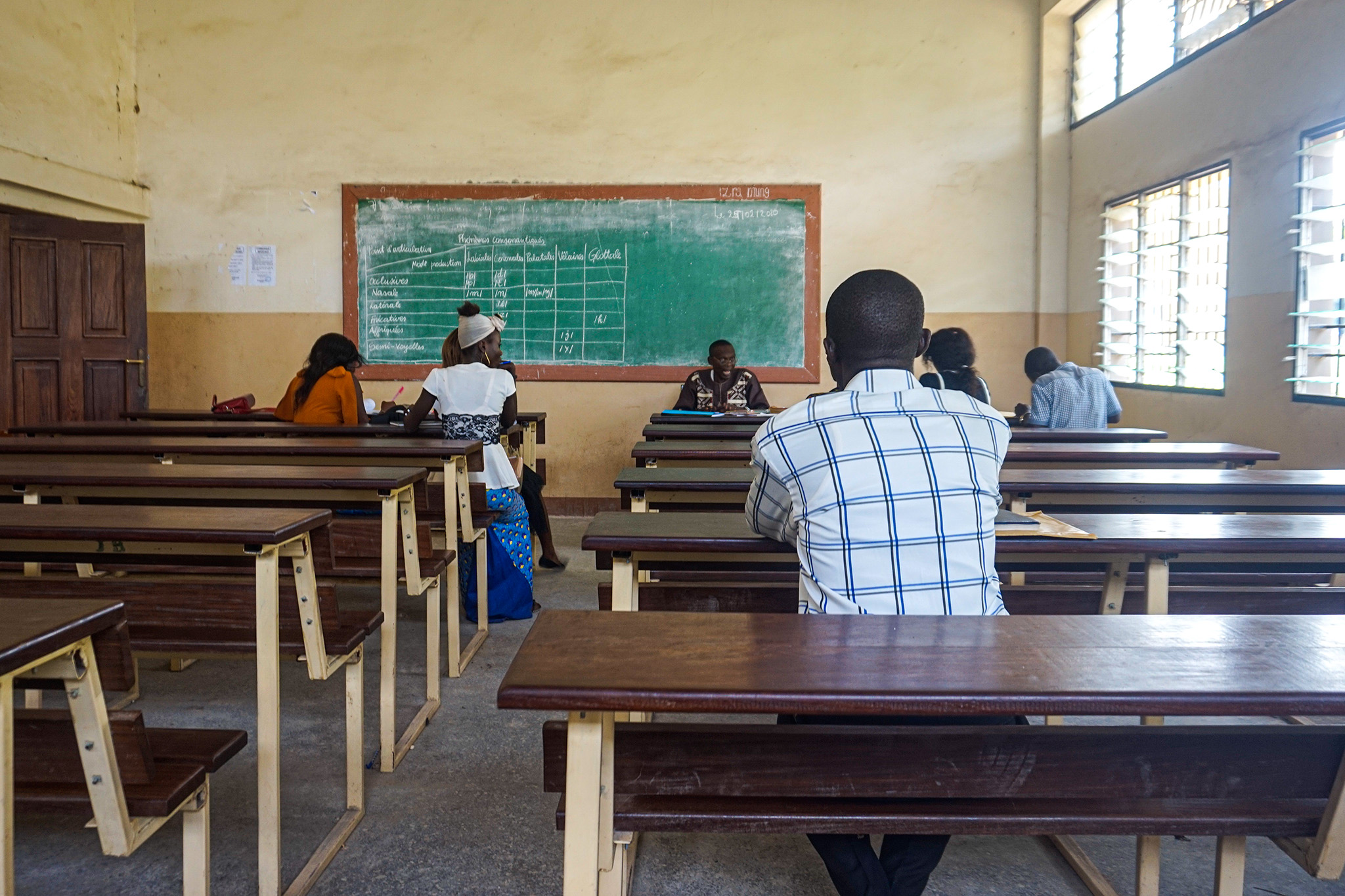 KISANGANI, DEMOCRATIC REPUBLIC OF CONGO — Jean Marie Tulume walked into his first day of class to discover one thing missing: the professor.

Thousands of university students face delays in schooling, due to a higher education boom in this provincial capital that has far outpaced the number of qualified teachers.

“We traveled back and forth, believing that the professor would be there, but to no avail,” says Tulume, who waited more than three weeks to start class.

The conundrum of too many schools and not enough instructors has upended higher education in the country’s third-largest city, leading to staff shortages, a decline in academic standards and a delayed future for aspiring graduates.

Officials recently shut down schools amid concerns about the new coronavirus, potentially delaying students’ education even further. DRC has reported 148 cases of the virus and 16 deaths as of April 4, according to the Johns Hopkins University & Medicine Coronavirus Resource Center.

Tulume also faced school delays last year. “I have to put up with it,” he says. “I have no choice.”

Higher education institutions in Kisangani are popping up like mushrooms. A decade ago, students could attend the city’s single university. Now they can choose from eight, six of which are private. About 300 professors are spread across the entire system, says Benoit Dhed’a Djailo, rector of the University of Kisangani — the main public university — and the city’s representative for the Ministry of Higher and University Education.

Some schools can’t afford to pay traveling expenses for visiting professors, forcing them to wait until tenured professors have time to teach. Courses go unstaffed through much of the year. And students get stuck with quarterly tuition fees even if their professor doesn’t show up.

Tuition fees vary annually, but public universities generally charge about $300 a year; private school costs roughly $500. Average income in DRC is less than $3 a day, according to a 2018 report by the national statistics office, making it difficult for many students to afford extending their education.

DRC already is reeling from a decline in commodity prices, according to the International Monetary Fund, one of the world’s worst Ebola outbreaks and violent conflict between armed groups, which has displaced around 5 million people in the country’s northeast. This compounds the slow recovery from a brutal civil war in the 1990s. Last year marked the first-ever peaceful transition of presidential power.

“The political and economic situation in our country disrupts the education system,” says Kasimir Ngoubi, a political analyst and professor at University of Kisangani. It doesn’t help, he says, that the path to an associate professor position can take up to a decade. The system is caught in a self-perpetuating cycle: a lack of professors means students don’t get the education they need to fill the teaching hole. Ngoubi advocates for government incentives that encourage talented pupils to consider a track in academia.

Officials argue they can’t afford to make such scholarships available.

The political and economic situation in our country disrupts the education system.Kasimir Ngoubi, a political analyst and professor at University of Kisangani

“The shortage of professors is a result of the lack of a substantial budget to overcome the crisis,” says Dhed’a Djailo, the education ministry representative. The ministry can’t cover operating costs to meet demand, recruit promising students or offer financial assistance for continued education, he says. “The government used to provide young people with student grants to encourage them to go to university, but given the country’s socioeconomic climate, there are no student grants anymore, and those who wish to pursue a scientific career will have to bear the university costs themselves.”

Current professors, while taxed with demanding schedules and frustrated pupils, prove the biggest beneficiaries. “The increase in the number of universities is welcome,” says Henri Paul Basthu, a professor who has taught for the past decade. “This helps me become more professional and earn a very good living.”

But it hasn’t worked well for students, many of whom find themselves thrust into vulnerable situations. They worry about the impact it will have, not just on their course schedule but on their future.

“I repeated my fourth year of study because of my refusal to obey a teaching assistant who asked me to have sex with him,” say Vivianne Mudunga, who is studying law at the University of Kisangani. She says she couldn’t get in touch with the professor to prove her valid grades and was therefore held back.

Other students tell stories of teaching assistants who control grades in the professor’s absence and demand money to access course outlines. Fabien Kitenge, a public health student at the same university, was held back because he didn’t pay the assistant’s bribe.

Beyond the immediate delays, students and administrators worry about the long-term degradation of academic rigor in a country struggling to improve its economy.

“I defended my end-of-cycle dissertation under a lot of stress, as my supervisor made me wait for months to complete it,” says Doris Bamba, a political science student who had a position waiting in his hometown – if he could conclude his studies.

The professor didn’t show up to grade his work until after the offer expired. Bamba lost the job.