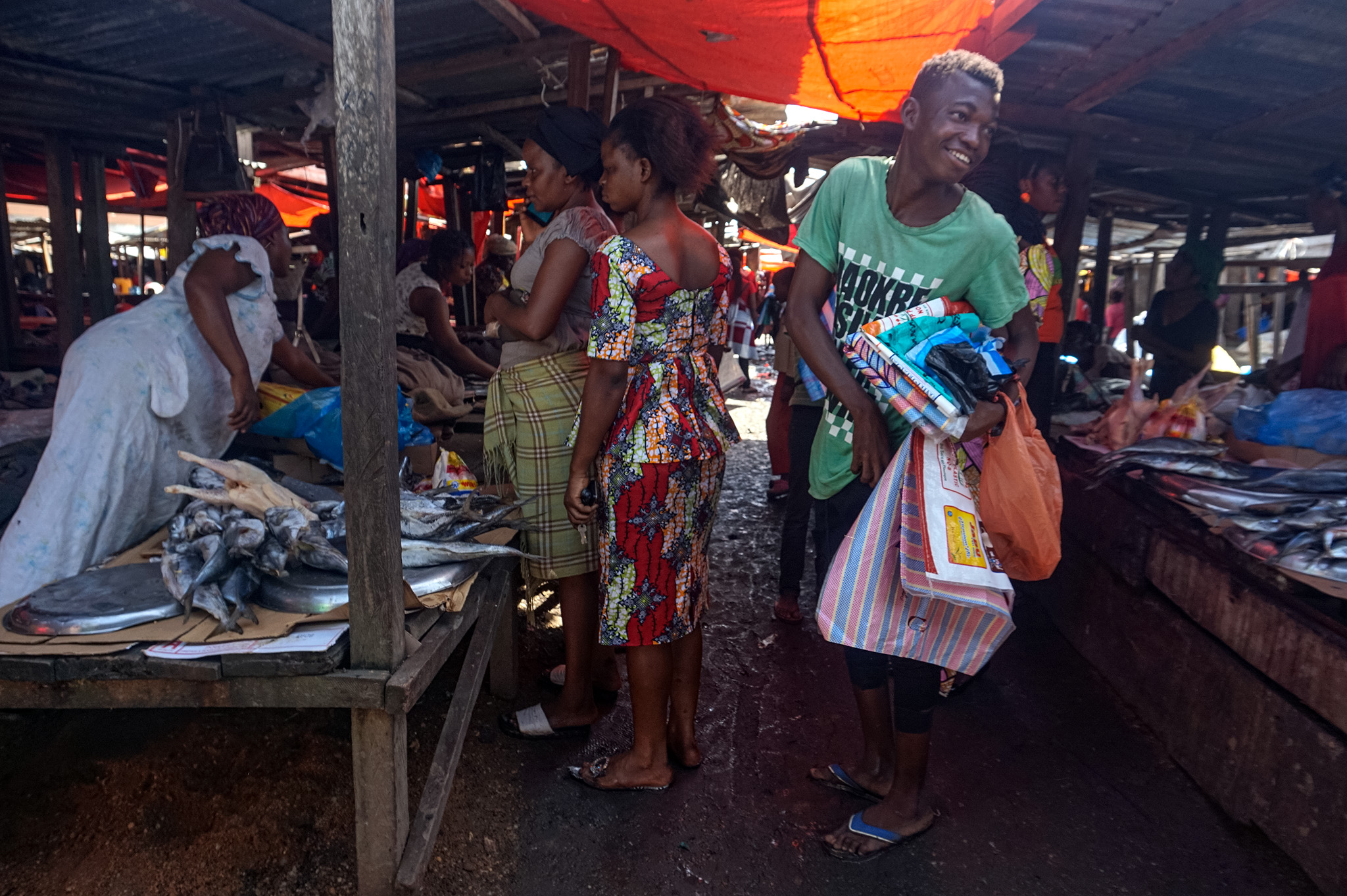 KISANGANI, DEMOCRATIC REPUBLIC OF CONGO — Shoppers swivel past each other to buy produce and rice, bracing themselves for the onslaught of the new coronavirus.

It’s an increasingly familiar image around the world. But here at Kisangani central market, where on an ordinary day more than 10,000 shoppers buy from 2,500 vendors, it means even more people crowded together – and greater potential for a dangerous outbreak.

DRC recently prohibited gatherings of more than 20 people and closed public institutions. But the ban made an exception for markets, so people could buy essential goods. They were soon crammed with patrons.

Open-air markets hold a central place in the commercial life of many African cities, with some self-regulated by traders. These gathering spots epitomize the challenge officials across the continent face as they struggle to avert an outbreak without destroying countless livelihoods.

Regulating markets “becomes very difficult, as it is as good as saying, ‘Do not eat food,’” says Dr. Ekwaro Obuku, a health policy expert and former head of the Ugandan Medical Association. “Buying food brings us together in crowds such as [in] markets and supermarkets, which increases the transmission.” 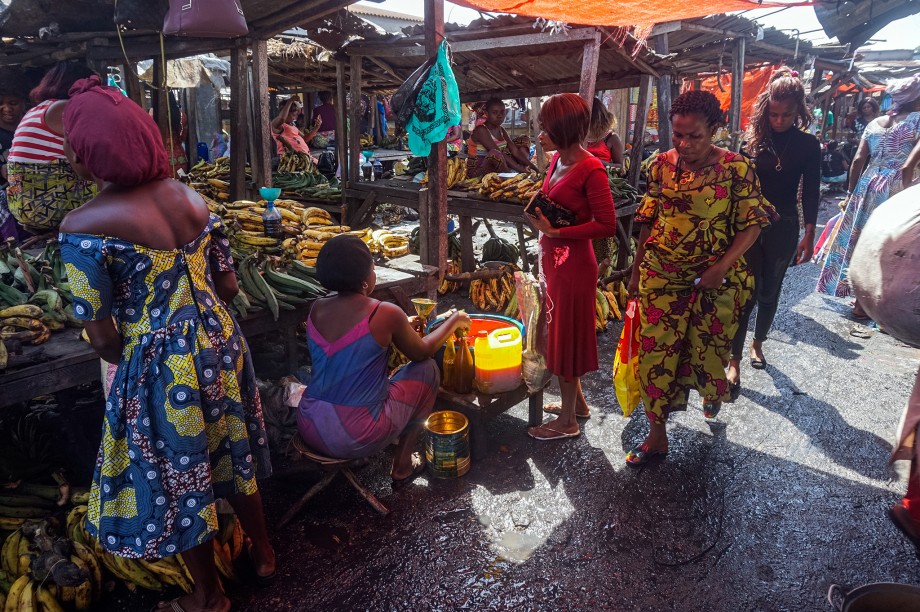 Shoppers move through narrow aisles at Kisangani's central market in Democratic Republic of Congo. Local authorities say there is little they can do to prevent the spread of the coronavirus at the market.

Kisangani shoppers are aware of the risks, even as they crowd stalls.

“I’m afraid when I come to the market, because meeting with lots of people means running the risk of [catching] coronavirus disease,” says Joséphine Boliata, on her way home with a bag in hand. “But we’ve no choice.”

Local market authorities acknowledge the perils but say there’s little they can do. Even the placement of hand-washing stations is difficult, as the market is outdoors and lacks a central entrance, says central market manager Claude Kakwa.

The provincial government also views crowd control as futile. “There’s nothing we can do to reduce this number,” says Jean Mabame, head of the provincial division in charge of economic affairs. 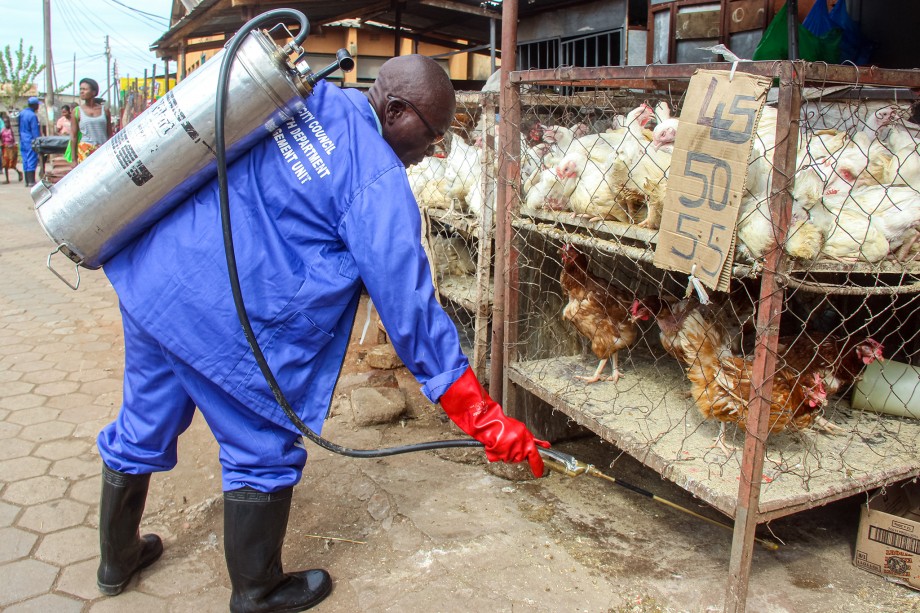 Jonas Zulu disinfects the ground near a chicken coop at Chainda market in Lusaka, Zambia’s capital. The government has encouraged good hygiene to guard against the coronavirus.

Zambian officials are slightly less pessimistic. The government has installed hand-washing stations and directed regular cleanups of markets across the country. Officials also are urging people not to stand too close to each other.

But those in the informal economy, like chicken trader Juliet Sakala, find such regulations difficult to obey while still bringing home enough to survive.

“I will lie to say I preach social distance,” she says. “My interest is money.” 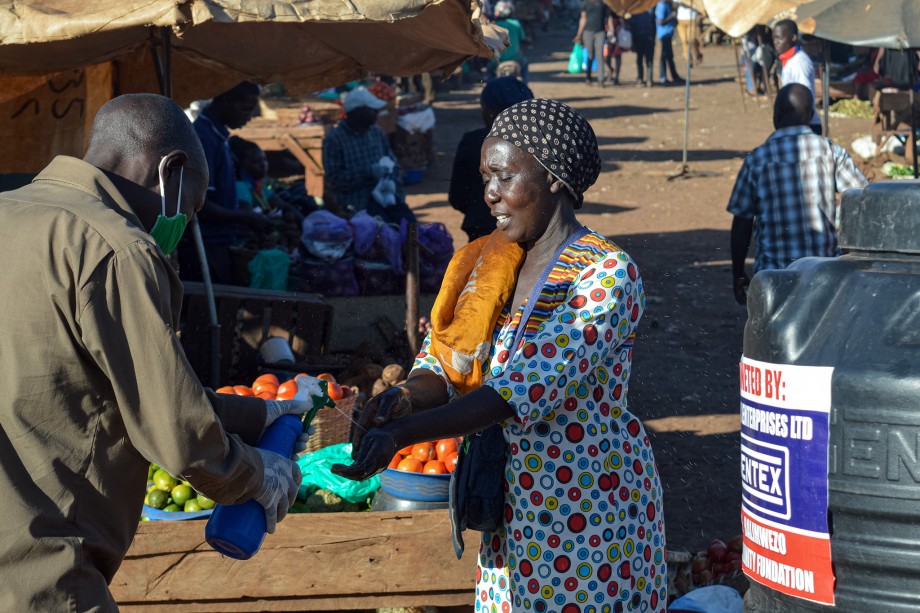 Volunteer Fred Kagonyira sprays sanitizer in the hands of shopper Doris Babirye before she enters Nakawa market in Kampala, Uganda's capital. The government has placed restrictions on markets to prevent the spread of the coronavirus, including requiring them to set up hand-washing stations at each entrance.

The Ugandan government has taken more stringent steps than Zambia or DRC. Officials have banned weekly and monthly markets – such as those that trade in cattle – because the vendors travel. In Kampala’s daily markets, traders must now sleep at the market and stay 4 meters (13 feet) away from the nearest person.

Nakawa market, a popular meeting place in Uganda’s capital of Kampala, closes earlier in the evening and has banned kids.

“Children in the market are hard to control,” says Charles Okuni, the market’s manager. “The mother touches money and then holds her child. They are safer at home.”

But that has proved difficult for many women traders. Lucy Akello, a tomato vendor, has brought her 2-year-old son to the market since he was born. She has frantically tried to find child care in her village, she says, a painful drain on her finances. 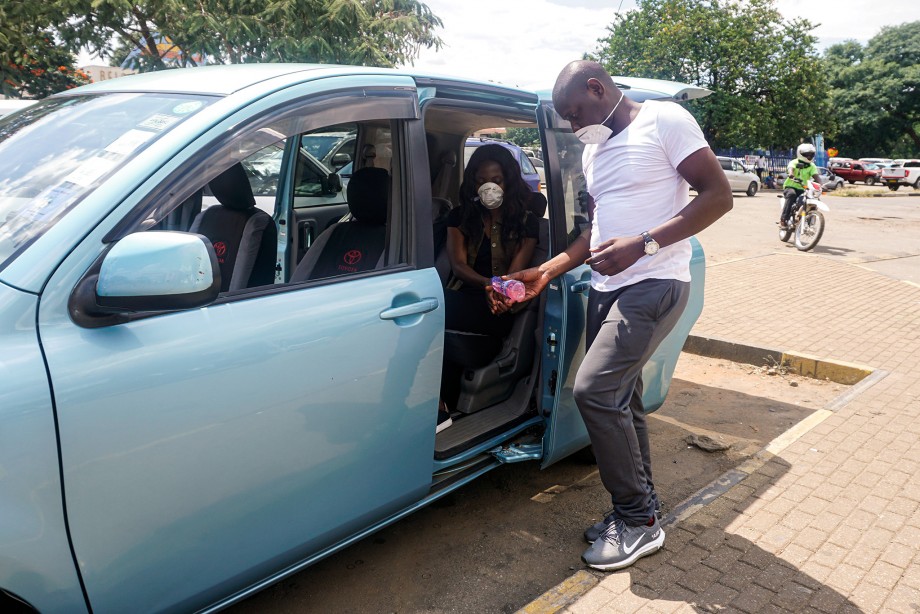 Taxi driver Raphael Makiwa helps a customer clean her hands in Harare, Zimbabwe's capital. The government has ordered a lockdown and closed markets to lessen the spread of the coronavirus, severely affecting Makiwa's business.

None of these countries compare to Zimbabwe, which has taken some of the region’s most aggressive measures to curb open-air markets. On March 30, the country instituted a 21-day shutdown, leaving gathering spots in Harare – its busy capital – virtually lifeless.

Workers in the informal economy – the drivers, chicken traders and tomato vendors, for example – bear the brunt of these regulations.

Up to 70% of Zimbabwe’s economy is informal, says economist Ithiel Mavesere of the University of Zimbabwe, meaning many will feel tough financial repercussions from the government’s decision.

Countries across the continent are grappling with the potential consequences.

“Dying from coronavirus and dying from hunger could mean the same thing,” Mavesere says. “But hunger is not spread from person to person like the disease.”

Taxi driver Raphael Makiwa used to pick up passengers at a Harare market. Now, with the market closed, he doesn’t go near it. Makiwa doesn’t know how long he can remain off work.

“I can’t even afford to stay at home for three days, let alone 21 days,” he says. “And I can’t afford to stock up on food because I don’t earn enough to have that option. We will starve.”