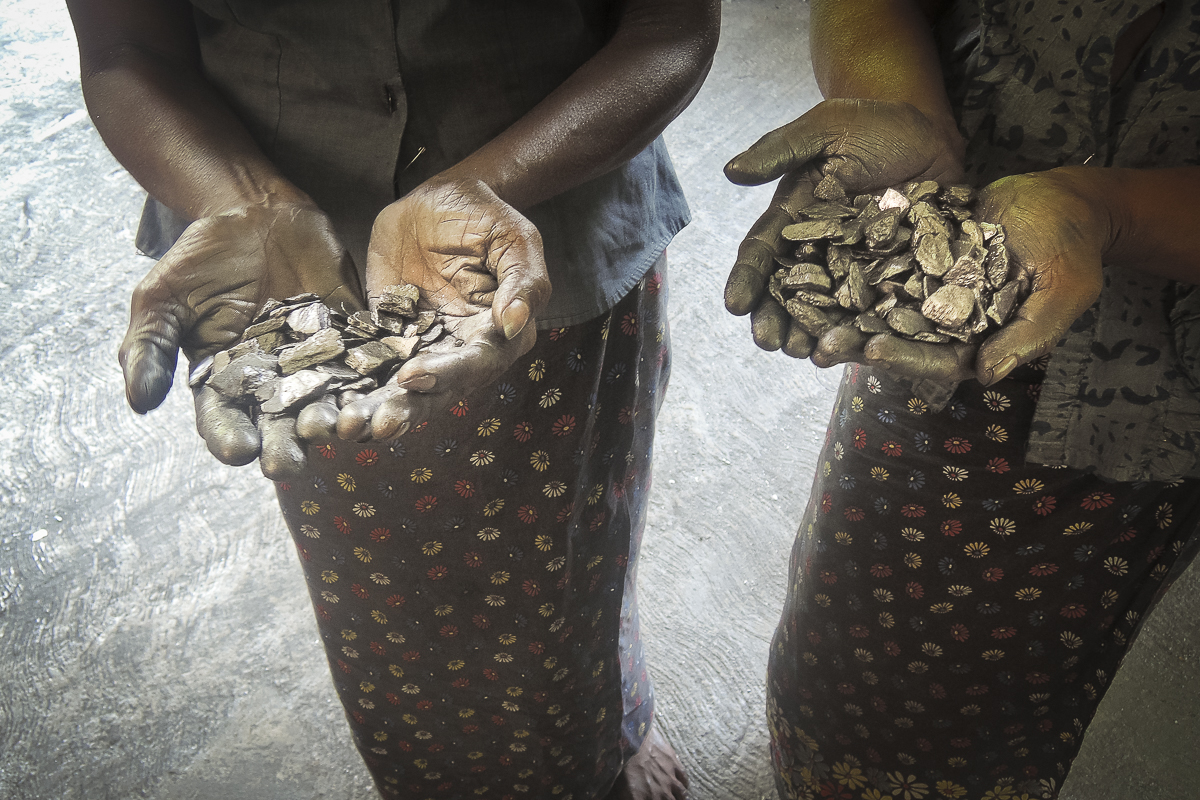 MADURAGODA, SRI LANKA — It took a two-day hunger strike for 50 workers at a state-owned graphite mine to secure a risk allowance increase from 16 Sri Lankan rupees (11 cents) per month to 300 rupees ($2.06) per month. They agreed that they would receive the allowance if they met a target of producing 70 metric tons per month.

The next month, the workers exceeded their monthly target by producing 74 metric tons (81.57 short tons) of graphite, says Sunanda Fernando, secretary of the Free Employees Union at the mine.

The increased risk allowance was added to each workers’ July pay.

Still, it’s a pittance compared to what the miners at the Kahatagaha mine could be earning if Sri Lanka’s graphite industry had more sophisticated technology and operated at a higher capacity.

“We have heard that miners in other countries earn hundreds of thousands of rupees,” says Sunil Ekanayake, a 64-year-old assistant leader in the mine’s drilling section who has worked there since 1988. “But the Sri Lankan graphite doesn’t draw a high price and, as a result, we receive a low salary.”

Sri Lanka was a leading supplier of graphite during the colonial era, when the British Empire ruled the island nation, says Prashan Francis, director general of the Gem and Jewellery Research and Training Institute. There were hundreds of mines spread throughout the southwest and central parts of the island. In 1916, during World War I, a boom time for graphite mining, Sri Lanka exported 33,411 metric tons (36,829 short tons), accounting for 35 percent of the world’s consumed graphite supply.

Demand for graphite, used in brake linings, as a lubricant and a host of other ways, dropped when the war ended. And when the British left Sri Lanka a few decades later, graphite export became more difficult, Francis says. 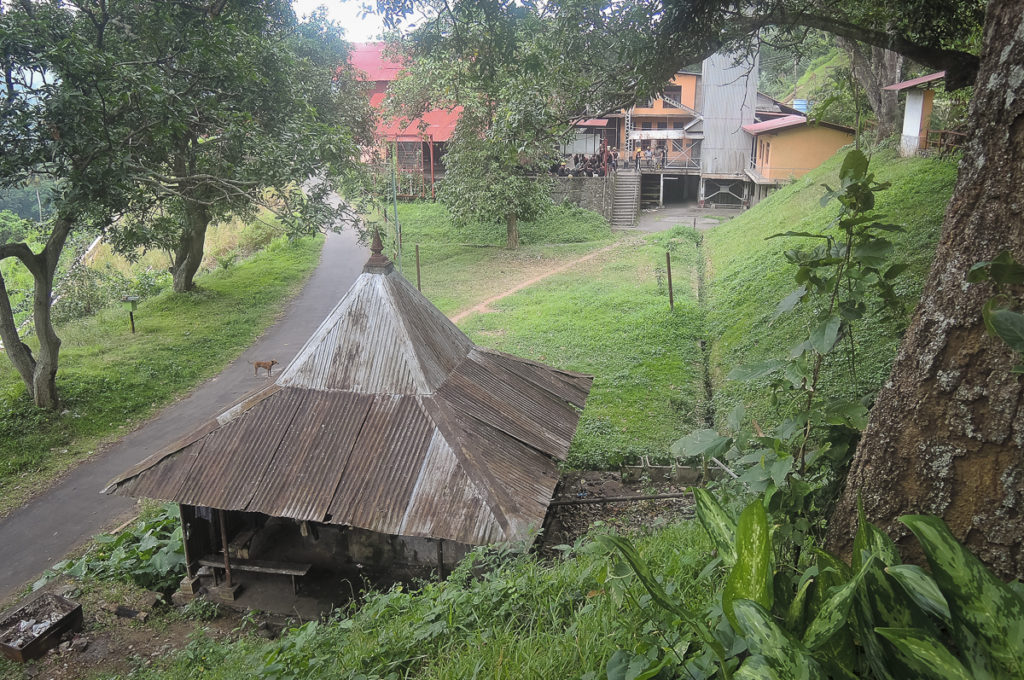 People who work at Sri Lanka’s state-owned Kahatagaha graphite mine say their salaries are low, despite the country having been a major graphite producer. 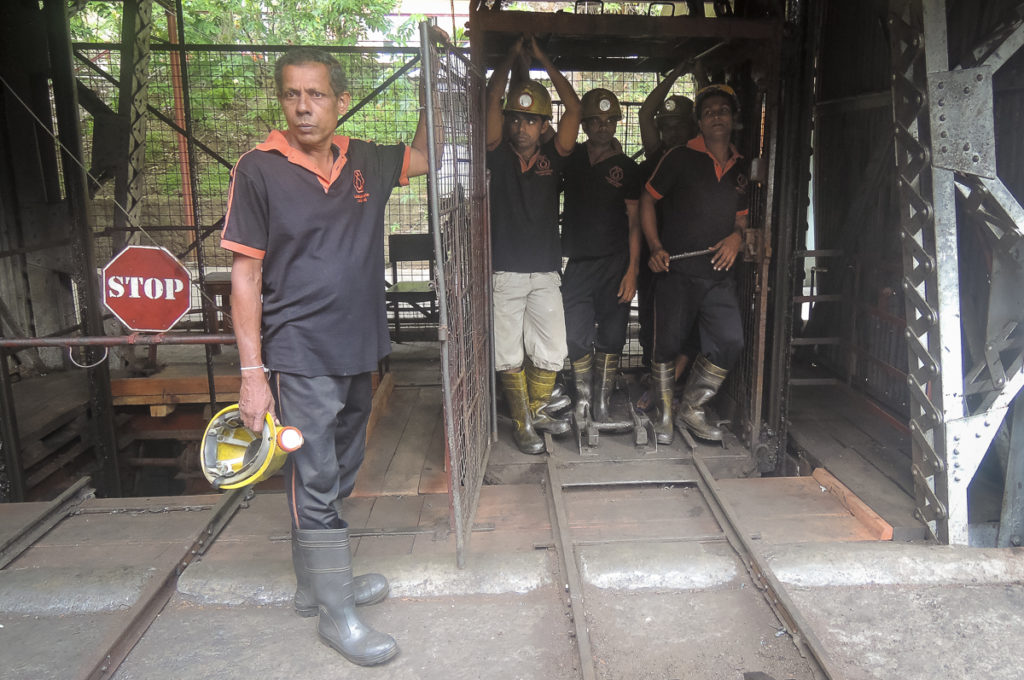 Miners board the elevator which takes them down into the mine shaft at the Kahatagaha mine. 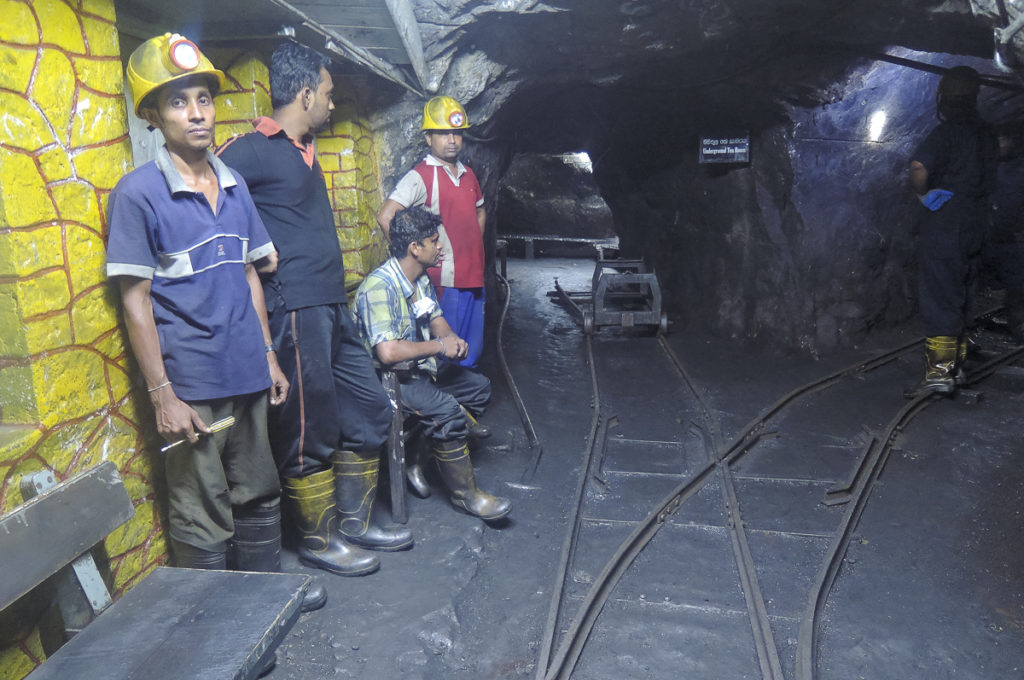 Miners pause in a rest area built into the mine shaft. 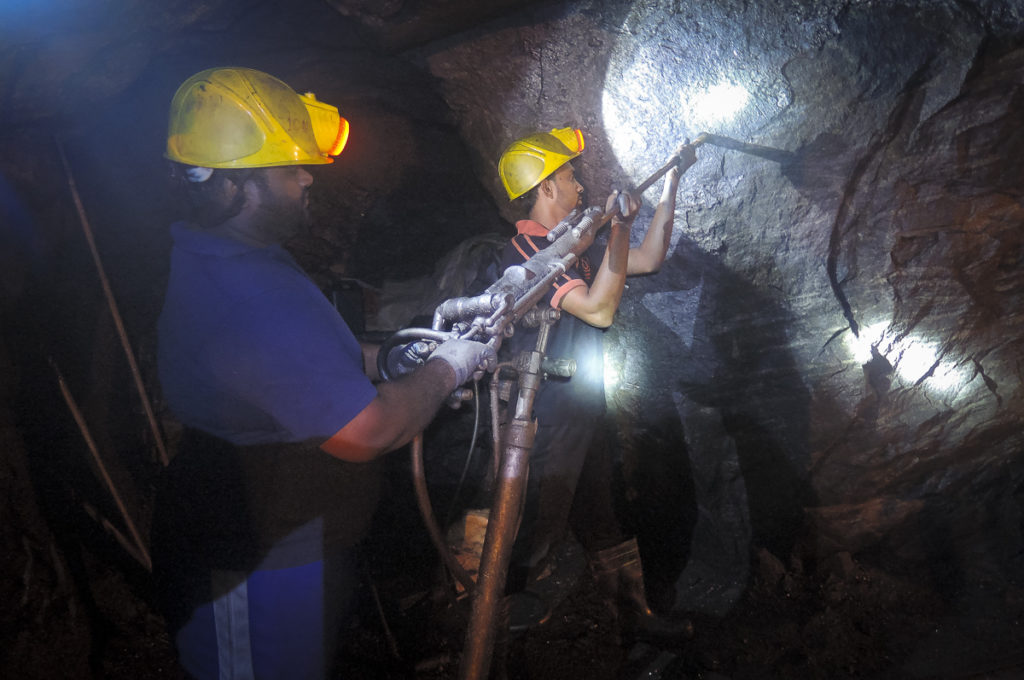 Drills bore into a graphite vein in the Kahatagaha mine. 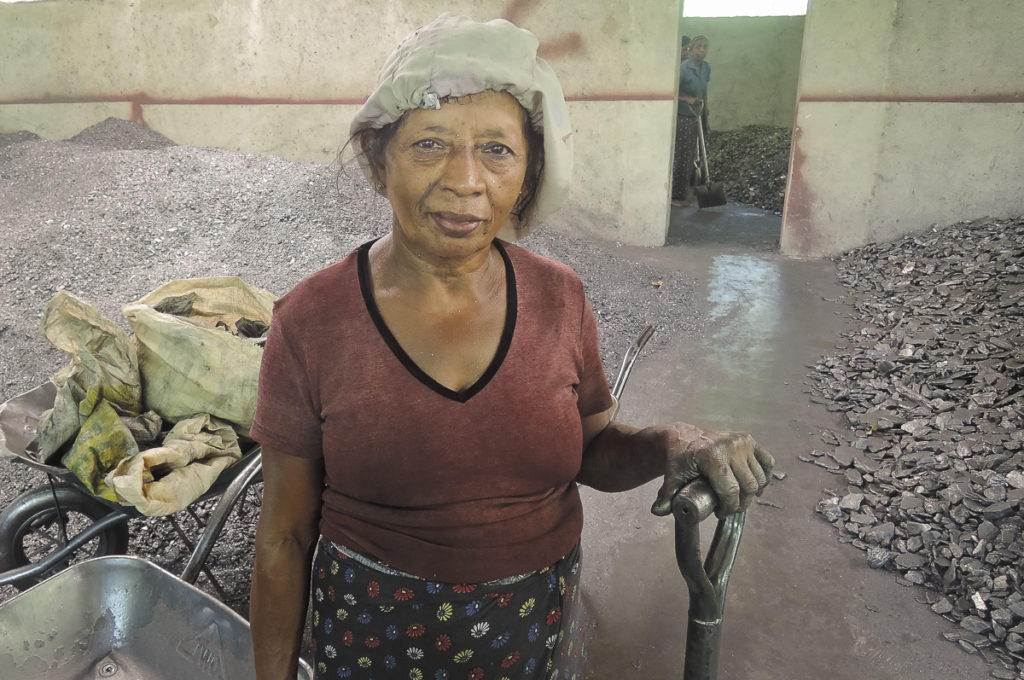 H. L. Susilawathi, who began working at the Kahatagaha mine in 1975, has worked there longer than any of the other women. The women, who break graphite pieces by hand, say they earn less than the men. 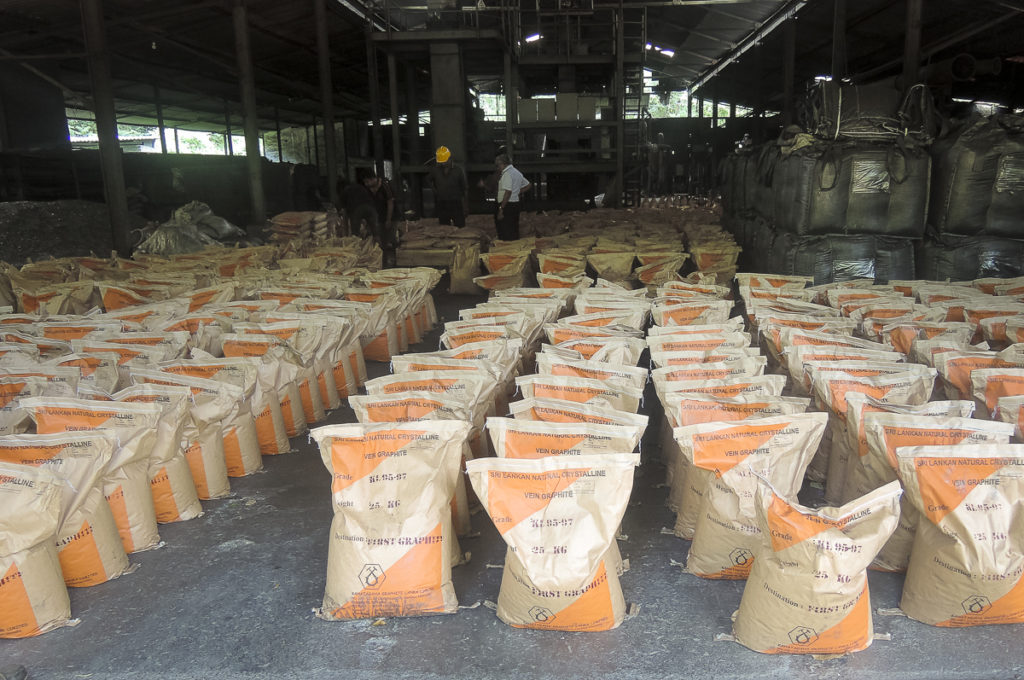 Sacks of graphite await overseas shipment at the Kahatagaha mine.

Now, the country has just three working graphite mines, of which the 102-acre, state-owned Kahatagaha mine, where 120 people work, is the largest. The other two mines, in Bogala and Ragedara, are owned by private companies. Industry experts say the modern graphite market in Sri Lanka hasn’t reached its full potential, even though it produces a high-quality type of the mineral.

The lack of investment in the sector, including low, stagnant salaries for workers, is due to a lack of revenue, experts say. The government doesn’t earn enough from graphite sales to pay higher salaries or buy better equipment, says Kasun Kariyawasam, a geologist at the Kahatagaha mine.

There’s no data for current graphite export totals, but the Kahatagaha operation exports about 900 metric tons (992 short tons) per year, says K. Warusawithana, manager of the mine. It also supplies 500 kilograms (1,102 pounds) of graphite each year to a local pencil company.

Kahatagaha Graphite Lanka Limited, which operates the Kahatagaha mine, sells a metric ton of graphite with 90 percent to 92 percent carbon for up to $1,100. A ton of 99+ percent carbon graphite sells at around $2,500. In the graphite market, the higher the carbon, the better the quality.

Without proper equipment, the Kahatagaha mine can’t meet the global quality standards in many aspects, Kariyawasam says.

“This is a state-owned company,” Kariyawasam says. “If the government invests in machines and equipment, we can automate many labor-intensive work. But the sales are not high and the profits are not gained from orders quickly.”

Advanced technology is necessary for producing graphene. Developed countries like U.S. and China dominate the graphene market. It is difficult for Sri Lanka to get it. Prashan Francis, director general of the Gem and Jewellery Research and Training Institute

Plus, graphene, a super-thin material that is one atomic layer of graphite, is where much of the graphite industry’s future is focused. Graphene is 200 times stronger than steel and is used to make high-end body armor and other products. None of the graphite mines in Sri Lanka produce it, but graphite mined there is bought by countries that use it to produce graphene.

“Advanced technology is necessary for producing graphene,” Francis says. “Developed countries like U.S. and China dominate the graphene market. It is difficult for Sri Lanka to get it.”

China produced 66 percent of the world’s total production in 2015, according to the U.S. Geological Survey. Sri Lanka, according to some estimates, produced less than 1 percent.

Even so, Francis says, the way to boost Sri Lanka’s underdeveloped graphite industry is to focus on lower-cost options.

“We must forget the high-cost graphene and move to producing lubricants, fusible, brake pads, carbon brushes, etc.,” he says. “I believe we can increase our income by six times in this way.”

Such a restructure of the industry would lead to better salaries for mine workers, who earn a paltry sum despite working in harsh conditions, Francis says.

W.P.G. Chandralatha, 55, started working in the Kahatagaha mine’s processing section in 1999. She is one of eight women who break graphite rocks with hammers, then sort the shattered pieces by hand.

It’s not enough money to live on, she says.

The men at the mine earn 982 rupees ($6.76) a day, with bonuses if they meet a monthly target. In June, the women officially requested that their wage be increased to match the men’s, but they didn’t receive a response so they filed a complaint with the District Labor Office.

“The management says that men earn a higher wage because they work in dangerous conditions inside the mine,” Chandralatha says. “But if you watch us working for a day, you will see that we work as hard as the men inside the mine. We pound and break the graphite by hand, we separate it by hand. It’s only the seven of us, and we don’t use any machinery, it’s exhausting work.”

“Our wish is that higher prices for the graphite will bring us a higher salary and a better life,” Ekanayake, the miner, says.