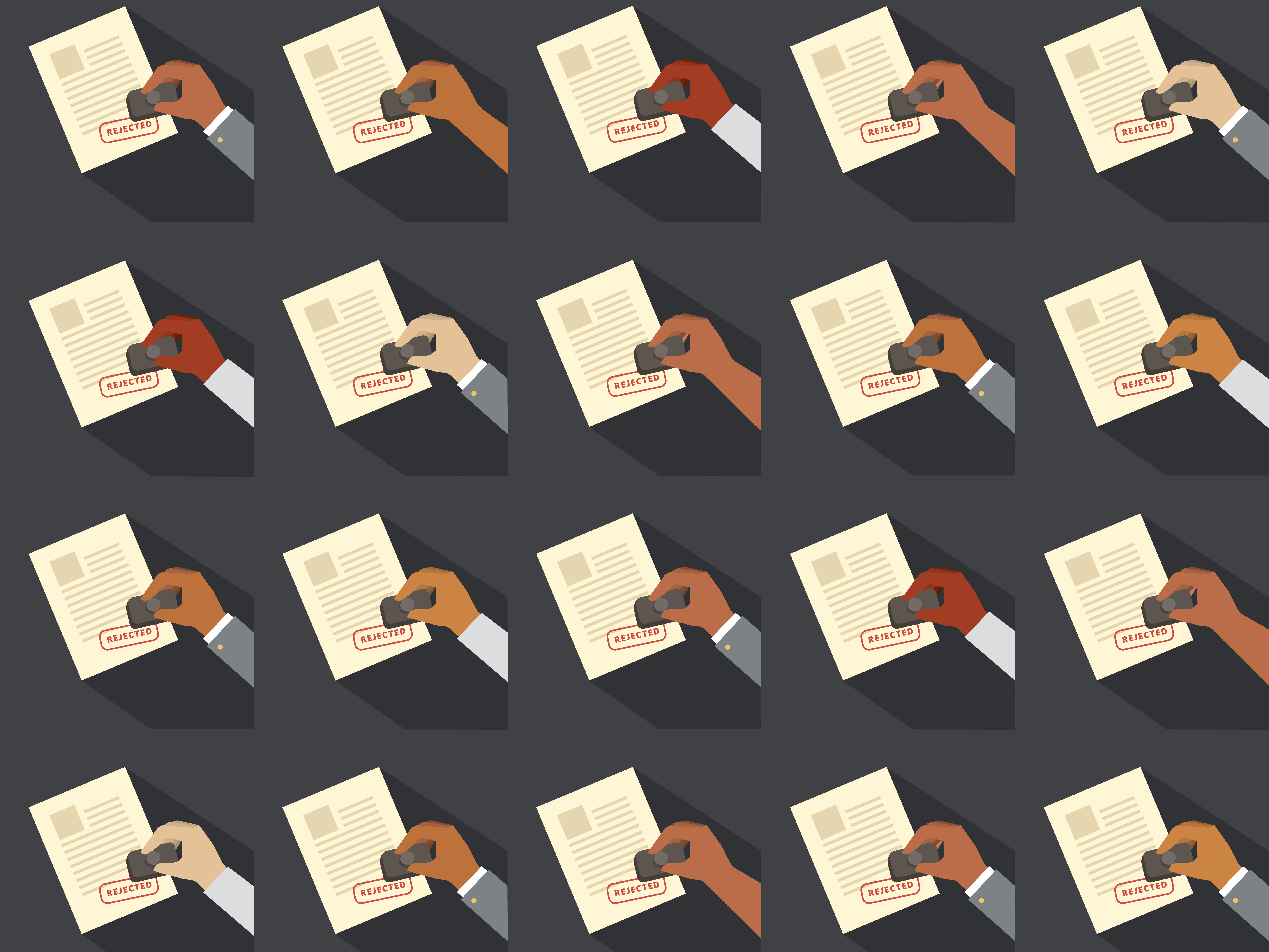 PESALAI, SRI LANKA — Stebhy Bensina’s hands tremble with emotion and agitation as she spreads her education certificates out on a plastic mat outside her family’s home in Sri Lanka’s northern Mannar District.

She is sorting them before taking them to be photocopied. Again.

“Each time I apply for a job, I have to photocopy the certificates,” she says.

Bensina has been looking for a job for more than two years. She and her family returned from living in a refugee camp in India in 2017. The job market is difficult for former refugees, she says. Her family waited eight years after Sri Lanka’s civil war officially ended before returning home, fearing ongoing violence and uncertainty in the northern part of the country.

Even though she received a bachelor’s degree in computer science from a state college in Tamil Nadu, the southern Indian state where she lived in a refugee camp with her family, she has been unsuccessful in applying for government jobs in her home district.

But just two days after she started, she resigned.

“Everything was new and I was scared,” she says. 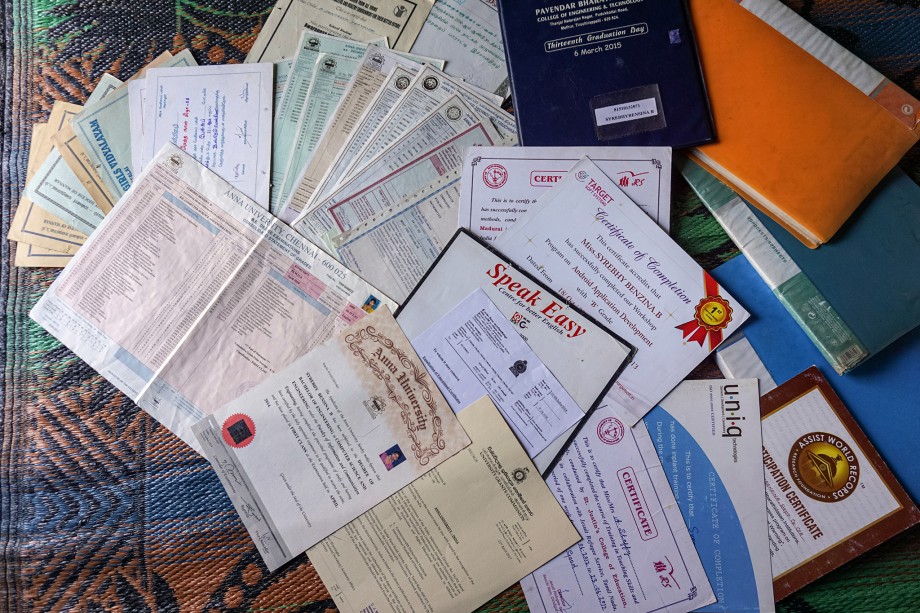 Stebhy spreads out her education certificates out on a plastic mat outside her family’s home in Sri Lanka’s northern Mannar District. She has to photocopy and present them every time she applies for a job.

Work culture in Colombo was different from what she expected. And she doesn’t speak Sinhala, the dominant language in Colombo. Many businesses and even government offices don’t accommodate people who speak Tamil like Bensina, even though it is one of the country’s official languages.

So Bensina decided to return to her home district of Mannar. She says she’s mainly applying for government jobs here. But those jobs are hard to come by.

As she prepares to apply for yet another job, she says she dreads the job interview process.

Years after the war, people who have returned from refugee camps in India say that finding a job in Sri Lanka is difficult, despite receiving advanced degrees from Indian schools. While the unemployment rate in the Mannar district ranged from 3.4% to 4.8% in 2017, about midrange for the country, there is no data to determine what percentage of people who are unemployed are returned refugees.

Without citizenship, Sri Lankan refugees in India struggle to secure professional employment. But after returning, prospects often don’t improve. According to a 2016 study by the United Nations High Commissioner for Refugees (UNHCR) on refugees returning to Sri Lanka, 77% of those surveyed reported that “lack of or no livelihood opportunities” was a main concern.

More than 300,000 Sri Lankans sought refuge in Tamil Nadu between 1983 and the end of the civil war in 2009. Now, more and more people are returning to Sri Lanka and searching for work, says Palanyandy Nagendhran, managing director of the Forum for Returnees, a nongovernmental organization which helps returning families.

As of 2016, there were 64,144 refugees from Sri Lanka still living in 107 camps in Tamil Nadu. An additional 36,861 refugees were staying outside formal refugee camps after registering as refugees at local police stations.

According to District Secretariat records, 2,709 people have returned to their villages in the Mannar district since the civil war ended.

But competition for jobs, especially government jobs, is tough.

“The mentality of everyone here is that a state job gives security and safety,” Bensina says, adding that people are more likely to find a bride or a groom if they work for the government.

Gnanappiragasam Raj Vinsan agrees. He returned to Sri Lanka in 2012, after living in India as a refugee for more than 27 years.

While in India, Vinsan obtained degrees in social work and literature. He also holds letters of recognition from the University Grants Commission in Sri Lanka, which recognize those qualifications.

Vinsan was able to find short-term jobs in Indian nongovernmental organizations where he could use his expertise. But after years of that, he decided to return to Sri Lanka in hopes of establishing his career back home.

“If you are a refugee you cannot work in the government sector,” he says, explaining the difficulty he faced in India.

But after years of trying to find work in the Mannar district, he’s been unable to find a job here.

Now he grows rice on his family’s 4-acre plot of land and gives private English language lessons to a few students to support his wife and two children.

Vinsan says he knows a lot of other people who resorted to working as laborers on construction projects or in small shops, even though they were highly educated during their time in India. Unskilled casual labor was the main source of income for 33% of surveyed families, according to the 2016 UNHCR study.

Many returned refugees say they suspect discrimination from government officials in charge of hiring.

But that’s not the case, says Sivapalan Gunapalan, Additional Government Agent for the Mannar district. He is a member of the selection committee for government job applications and says the available jobs are highly competitive.

In 2018, for example, more than 500 candidates were interviewed and sent to the relevant government agencies and departments, he says. There is no data to confirm what percentage of those 500 were returned refugees.

But Gunapalan did add that candidates who “did not have extracurricular activities to show in Sri Lanka would have earned them fewer points during the interview process.”

For his part, Nagendhran, the Forum for Returnees managing director, says he does not believe there is an organized bias against returned refugees. But he says that there are often strong administrative barriers that work against those candidates.

What’s more, hard-earned educational degrees are often not recognized here. People have to go through another long process to get the Sri Lankan government to recognize and acknowledge their qualifications.

Only then can they begin to apply for jobs.

Nagendhran says it’s common for returned refugees to have a 3-year diploma from polytechnic colleges in India, which is equivalent to an engineering degree in Sri Lanka.

“This qualification is recognized by the Indian universities, but there is no recognition for these diplomas in Sri Lanka,” he says.

For some, the job search is too cumbersome, which has led to desperate choices, says Mano Giritharan, a social worker in the Mannar district. He says that many people are returning to India to live as stateless refugees or even seeking illegal employment in other countries.

Advocates are working to help more returned refugees find employment, citing overall benefits for the community when people from diverse backgrounds are employed in public service.

Nagendhran says that thousands of Sri Lankans who remain in India want to return home. But the lack of employment is holding them back.

“The refugees will return to their homeland only if arrangements are made for their livelihood,” he says.