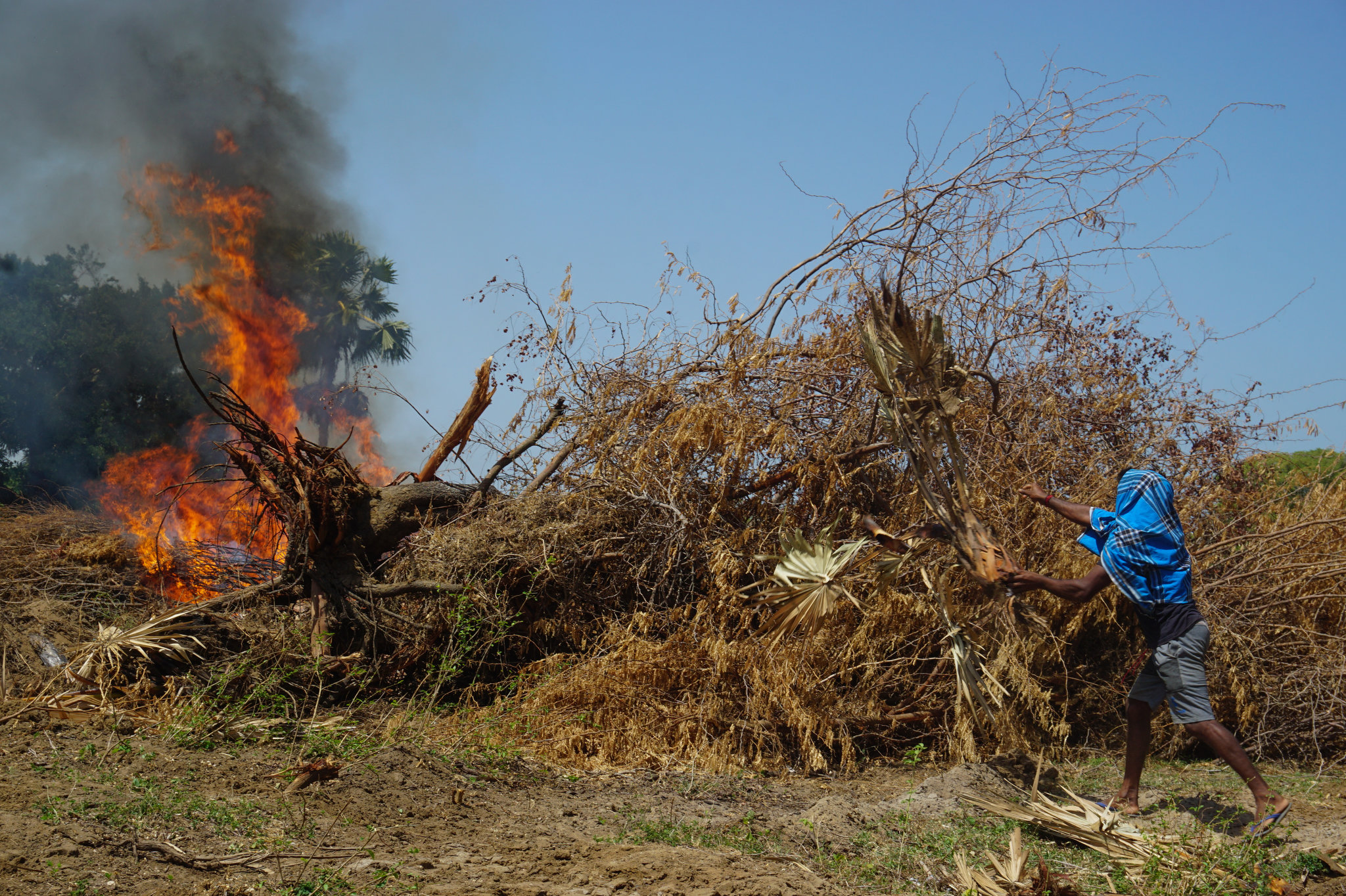 MANNAR, SRI LANKA — When Mohammadhu Sitheek returned to his village, 20 years after the civil war forced him out, he found an unexpected intruder had taken root.

A forest of squat and evergreen trees, the branches dotted with thorns, loomed over nearly every abandoned plot of land in Mannar, a coastal district in northwest Sri Lanka. “See here in my home, there are no other trees but this,” says the farmer, pointing to the thickets taking over fields, ponds and even streets.

The mesquite – also known by its scientific name, Prosopis juliflora, or colloquially as the “devil tree” – is a famously robust plant that thrives in arid regions like Mannar. It’s quick to outcompete rivals, with roots that can burrow up to 20 meters (65 feet) deep in search of water. During the 26-year conflict, without farmers to quell their spread, the trees prospered.

“Even if they’re destroyed, they keep on growing,” says Sitheek, now the president of a local farming group, as he supervises workers removing mesquite branches from a village canal.

The 59-year-old knows all too well how resilient the plant can be. He had never seen a mesquite when he fled Mannar in 1990. Fighting was then intensifying between the Sri Lankan government and the Liberation Tigers of Tamil Eelam, who sought to carve out a separate state for the Tamil minority. The farmer first encountered the trees on his return to Kaddaikkadu village in 2010, a year after the LTTE were defeated.

Ever since, the mesquite has been threatening livelihoods in a region where most rely on subsistence farming, encroaching on land returnees need to build houses, cultivate crops and raise cattle. 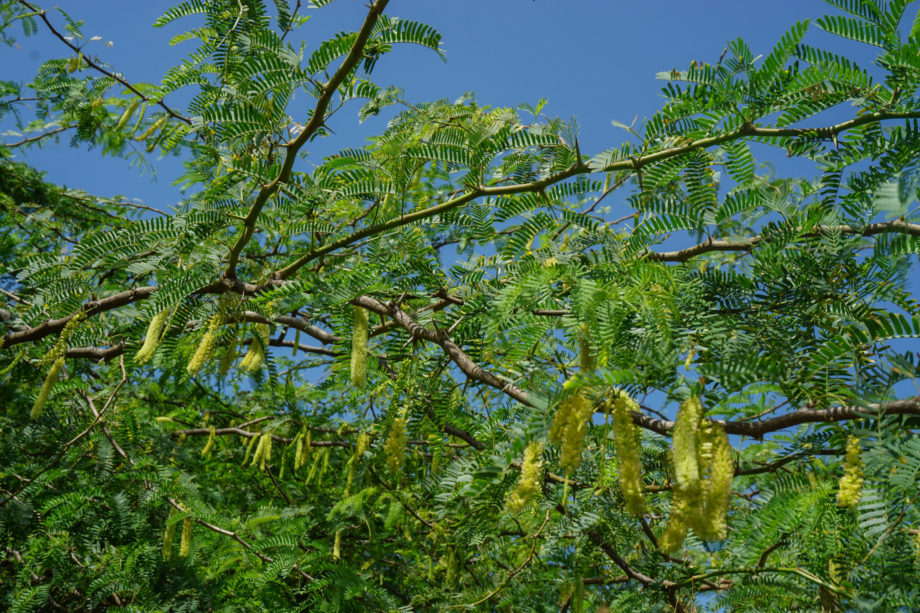 Some researchers say Sri Lanka should use mesquite trees to its advantage. The green pods and foliage, for instance, could feed livestock.

Uprooting the trees is exhausting and expensive. Some attempt it manually but to properly dislodge the roots and avoid injury, villagers must hire workers who bring in chainsaws or bulldozers. It has made resettlement even more challenging.

“Our land was full of mesquite trees, so we weren’t able to settle immediately,” says Sivapalan Mohan, a 23-year-old who was repatriated to Mannar with his wife in 2018.

Mohan’s parents were among some 85,000 Tamils who fled to neighboring India during the 1983-2009 war. Tens of thousands of others were displaced internally, like Sitheek, while many sought refuge in Europe and North America. In total, more than 1.5 million Sri Lankans were uprooted by fighting that killed more than 70,000 people and left 20,000 missing.

Mohan and his wife had never visited Sri Lanka. Both were born in the southern Indian state of Tamil Nadu and raised in refugee camps. But they were eager to start married life in their homeland. The mesquite proved an unexpected setback, forcing them to stay with a friend until they could save 100,000 Sri Lankan rupees ($500) to clear the plants and start a farm.

“Even if they’re destroyed, they keep on growing.” Mohammadhu Sitheekpresident of a local farming group

Today the couple live in a small hut built with cadjan, mats woven from coconut palm leaves, on the half-acre plot Mohan inherited. Early on a June morning, before tending to his groundnuts, Mohan explains how some neighbors “put up with the trees” as they can’t afford to remove them. But he worries they will “turn into jungles.”

The mesquite was originally brought to Sri Lanka from the Americas in 1880 by British colonialists. In the 1950s, the trees were used to improve local soil and foliage. But unlike other plants introduced to the island – like tea, rubber or coconut – they spread aggressively. Mesquite, native to Mexico, Central America and South America, is now considered one of the world’s most invasive species and a threat to native ecosystems from Sudan and Kenya to Sri Lanka.

Riyas Ahamed, a senior lecturer in zoology at the South Eastern University of Sri Lanka, says the problem will “get much worse if the trees aren’t removed immediately.” The scholar, who researches invasive species, is concerned by the trees displacing more nutritious indigenous plants. “If they keep occupying the fields, it will be impossible for farmers to produce paddy,” he says.

For years, cash-strapped returnees have grappled with mesquites alone. But in May, they rallied together, collectively demanding the government’s help.

K.M.A. Sukoor, deputy director of agriculture in Sri Lanka’s Northern Province, which encompasses Mannar, says the state has agreed to find private or volunteer partners to raise capital and remove the trees. But at the time of writing this story, a new wave of COVID-19, the disease caused by the coronavirus, had delayed a follow-up meeting. 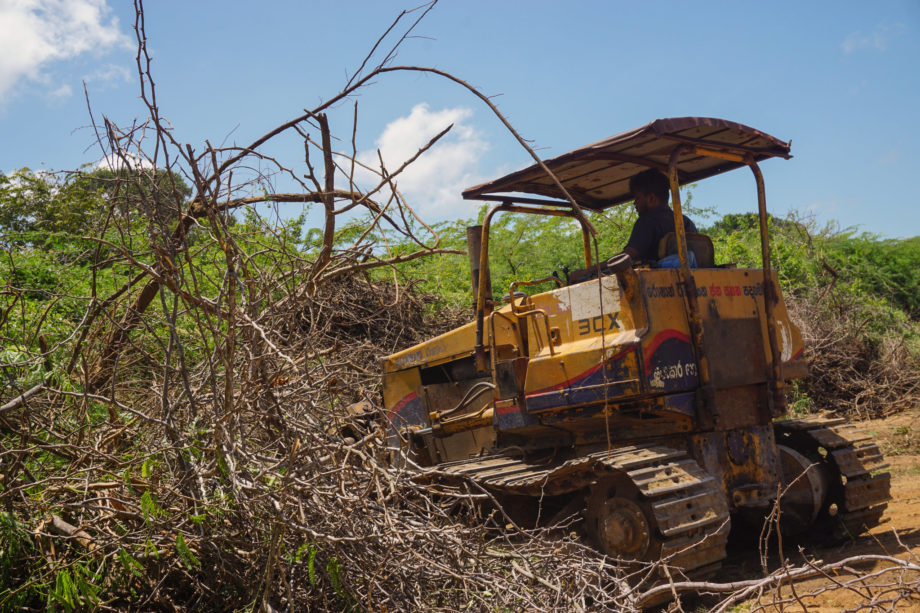 Residents hire workers to dispose of the thorny trees, paying 3,000 Sri Lankan rupees ($15) per hour to clear their land.

Some researchers suggest looking beyond eradication, which has proved costly and ineffective in other parts of the world. They argue it’s time to harness the benefits of mesquite instead. Mesquite pods, for instance, could be used as livestock feed, suggested a paper presented at the 2005 Commonwealth Forestry Conference, an international forum for foresters.

“Though it is categorized as an invasive plant, [mesquite] has a lot of economic uses which people don’t know [about],” paper co-author Nimal Perera, a professor emeritus of ruminant nutrition at the University of Peradeniya in central Sri Lanka, says.

Asarak Sakeelabanu, Mannar’s director of agriculture, also points to mesquite as “valuable” firewood or compost. Further research is needed, she says, to “see if we should destroy [the trees] completely or keep some.”

Returnees are already mobilizing mesquite. With a chainsaw and a can of kerosene, Mookkaiya Lohanathan, 60, starts work at dawn. He lowers the blade and brings a twisted bough to the ground with a thud. It will fetch him around 300 rupees ($1.50). His wife, Vivehi Lohanathan, hacks the twigs to sell for firewood. In a good week, they might get an order for 300 logs.

But the woodcutter would prefer other work. “It’s true that mesquites give me an income. But it’s a very difficult job. You have to clear a heap of bushes before cutting one tree,” Mookkaiya says. “Even cutting one is a risk, because of the thorns. It’s better to destroy these trees.”