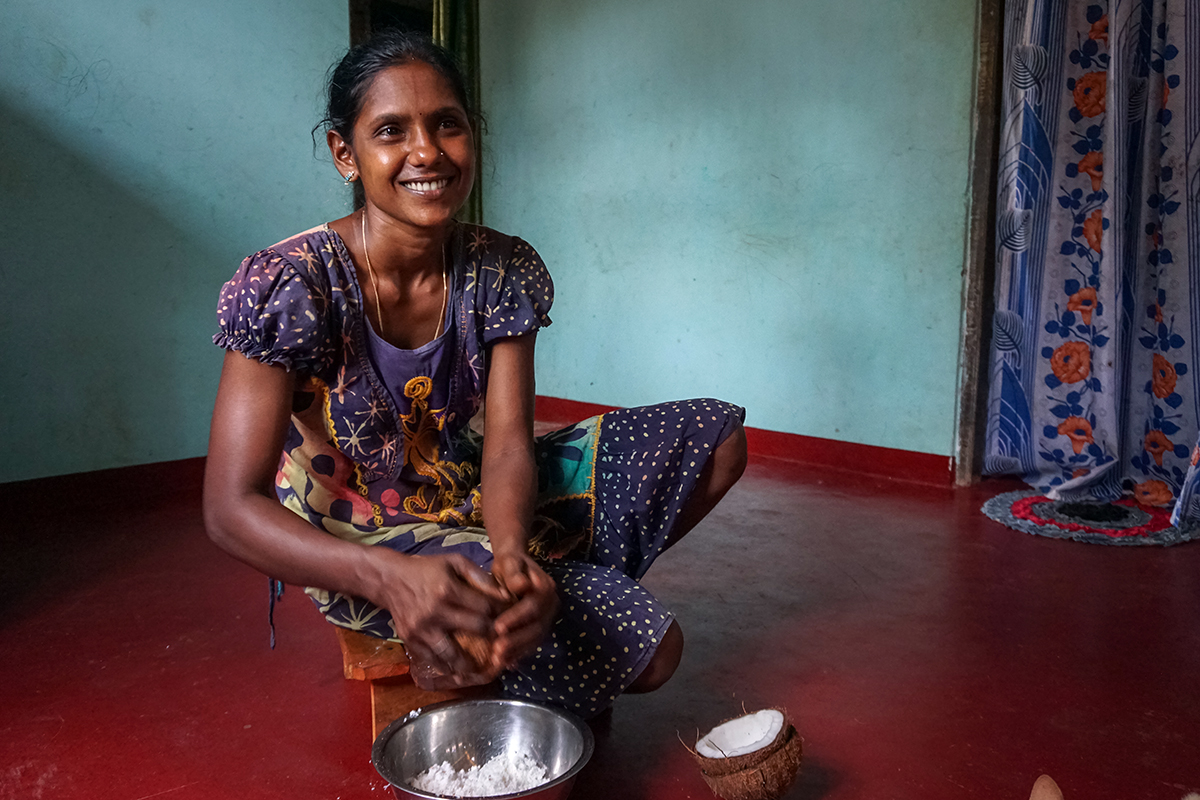 CHEDDIKULAM, SRI LANKA — It’s Sunday morning and Kirusnakumar Sumathira is cooking a chicken curry for her two teenage children. It’s their favorite dish, and she plans to surprise them with it at lunch time.

Sundays are happy days for her, she says. She works every other day at a garment factory. There, she says, she earns 16,000 Sri Lankan rupees (about $91) per month. With overtime and allowances, she says she can earn up to 20,000 rupees (about $113) each month.

Compared to the 1,500 rupees (about $8.50) she earned in her previous job as a preschool teacher, Sumathira is happy with her current salary. Her husband was killed in a bomb blast in 2007, she says, when she was seven months pregnant with her second child.

At that time, Sri Lanka was in the middle of a civil war. Sumathira says she lived on donations from family members and neighbors. The preschool job offered barely enough money to buy food, she says.

The civil war, which ended in 2009, took a big toll on the economy in this area known as Vavuniya District, located in Sri Lanka’s Northern Province.

“Unemployment is a huge problem and mostly affects women,” says Subramaniam Jeevasuthan, a senior lecturer at the Department of Sociology at the University of Jaffna. It’s particularly high among women in northern Sri Lanka – nearly five times the unemployment rate of men, according to a study by the U.N.’s Food and Agriculture Organization. 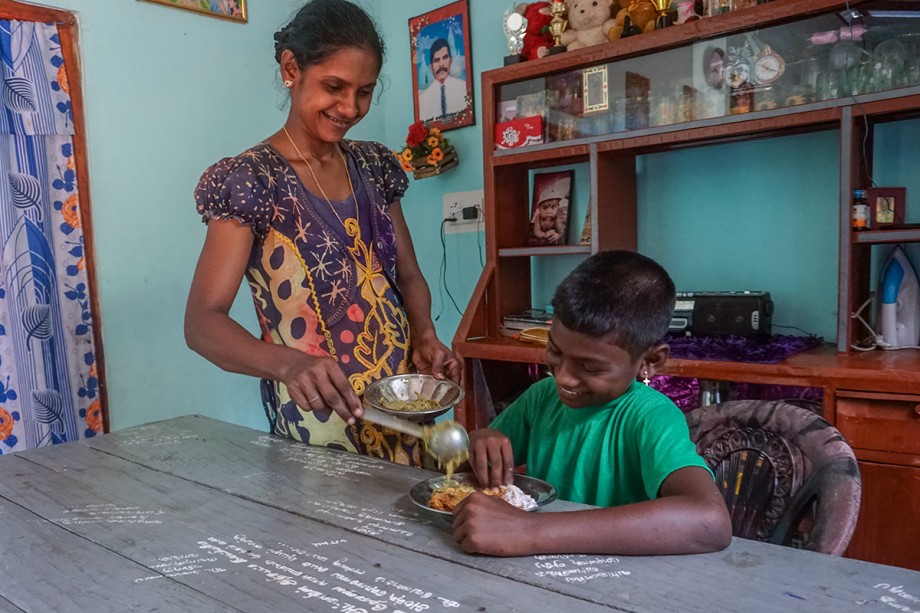 Kirusnakumar Sumathira serves a meal to her son in their home. She says she enjoys her Sundays at home with her family, especially because she works the rest of the week in a factory. “With sweat pouring, we work hard,” she says.

Opportunities for work in agriculture or the service sector is limited, and pays a very low wage, he says. Often, the work is temporary or doesn’t pay well.

But the garment factories offer permanent jobs and monthly salaries, along with pension benefits mandated by the state, Jeevasuthan says.

Sumathira’s factory is now 1 of 2 that are major businesses in the area. Both factories together employ nearly 3,000 women from Vavuniya district. Women make up 73% of their entire workforce of 3,658 people, according to information the factories provided to Global Press in December 2018. (Sumathira asked that Global Press Journal not identify which factory she works for because publicity might jeopardize her job security.)

Narayanan Nanthiny, a woman from Vavuniya district, says there were few jobs in the area at the time the civil war was ending. The jobs that were available offered low pay. Nanthiny says she worked for a local organization in 2008 and earned 5,000 rupees (about $28) per month. Later that year, she went to Colombo, Sri Lanka’s commercial capital, to work in a garment factory. There, she says she earned a monthly salary of 19,000 rupees (about $107).

“It was scary and sad to be separated from the family, to live alone and to work in Colombo,” she says.

Her eyes sparkling with pride, Nanthiny describes how she saved money to put toward her own wedding expenses, including her dowry, a gift of high value traditionally given by the bride’s family to the groom. Nanthiny left her job to get married in December 2018.

Even though she was able to earn and save money, Nanthiny says, there’s a stigma associated with working at a factory.

“When we say we are working at the garment factory, people look at us mockingly. I don’t know why,” Nanthiny says.

Mayalagu Sivakumar says the social stigma against factory workers is due to a lack of awareness about work standards in factories.

“After going to the garment factory, there is a slight change in the way they operate,” Sivakumar says, referring to the female factory workers. “There are changes in the clothes they wear, the makeup and mobile phones and other home equipment they use.”

Women who earn their own money by working in factories tend to spend money on clothes and other items they choose for themselves, rather than use what is chosen for them by their families, Sivakumar says.

“There is no opportunity for the community to completely understand this,” he says.

Unemployment is a huge problem and mostly affects women.Subramaniam Jeevasuthan, a senior lecturer at the Department of Sociology at the University of Jaffna

Factories are often large areas enclosed behind high walls, so people in the community can’t see what happens inside. Family members of workers aren’t allowed beyond the front gates, he says.

“Early morning, a bus picks them up and in the evening, they are dropped back,” Sivakumar says, describing the transport service the factories provide to workers. “This is how they go and come back. Since there are men working in the garment factories, people have created a view that there is a problem.”

Sumathira says she’s decided to ignore snide remarks that people tend to make about factory workers. There are strict cultural expectations for men and women in this area, including taboos against them spending too much time together if they’re not married. There can be an assumption of sexual misconduct if unmarried men and women engage with one another, even if they are working in a factory.

“Some people, looking at it from outside, talk about it badly,” Sumathira says. “But if you want to come and see for yourself, there is nothing like that happening. With sweat pouring, we work hard.”

There’s no doubt that the factories have created jobs, but some local people worry that the types of jobs won’t help workers develop skills.

Jeevasuthan, the University of Jaffna lecturer, says that factories, while offering higher salaries for women, have had a negative impact on the area’s small businesses.

“Since most of the women are attracted to the garment factories and are seeking employment there, food production places, small-scale farming and small home industries are affected,” he says.

“After the garment factory came up here, it has become difficult to find people to work in our shop,” he says. “We are looking for people to work even now.”

Subassingam says he’s offering 12,500 rupees (about $70) per month, and that the job will help workers build skills and develop management experience.

“People working in the garments need not have any training,” he says. “They are given only a part of the garment to sew. Because of this, they have no opportunity to develop themselves. Even if they stop working at the garment factory, they do not know any other job.”

But Sumathira says the factory offers a sound financial future. In addition to a salary, she says, workers get free transport and free breakfast and lunch.

“Many people are earning and are able to meet their needs,” Sumathira says. “It will be difficult for me if I do not have this job.”