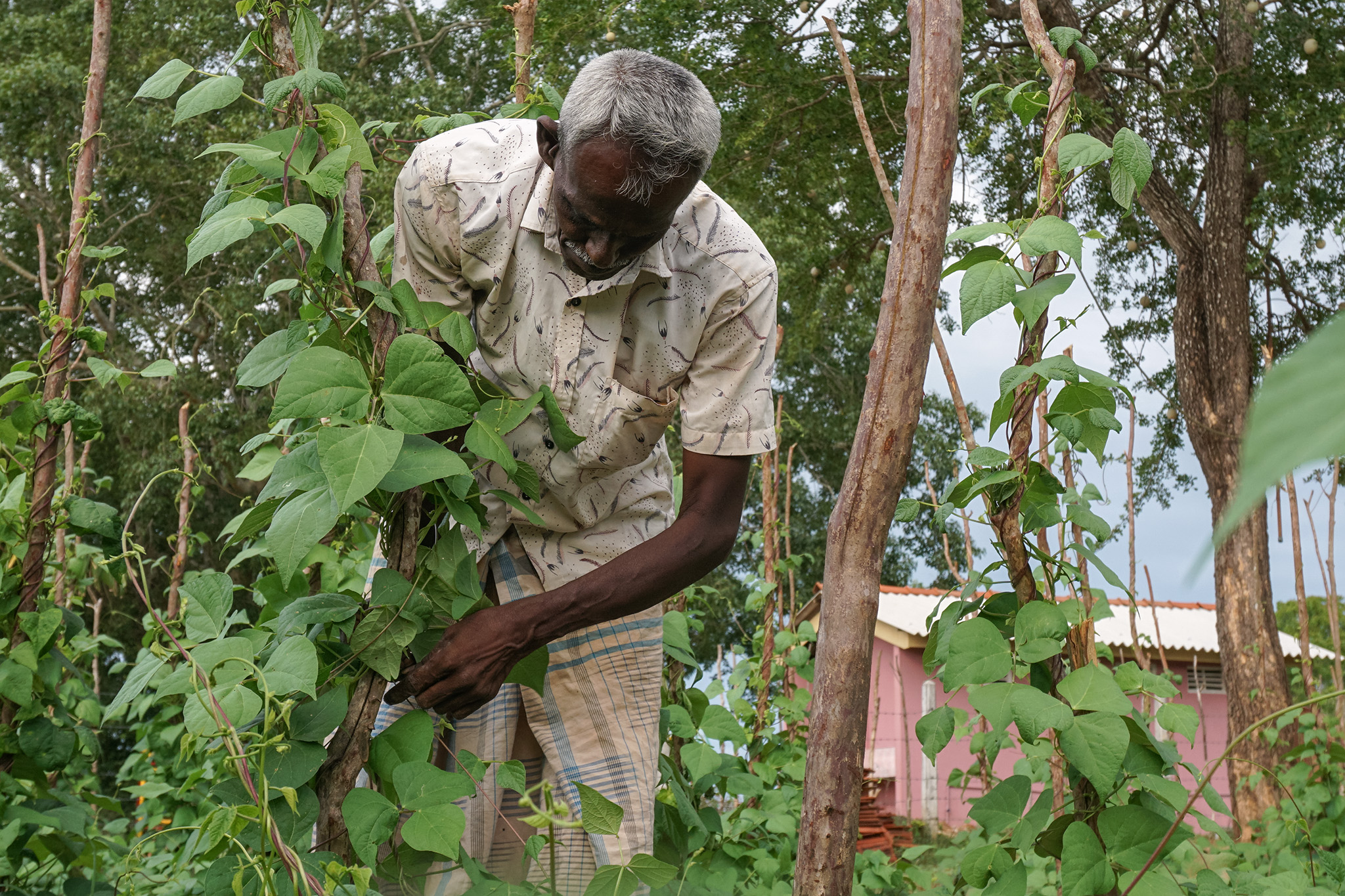 CHEDDIKULAM, SRI LANKA — On a beautiful evening, just before sunset, Mutthusami Selvareththinam crouches in the garden in front of his house, weeding between beanstalks and wrapping creepers around their supports.

Selvareththinam has grown beans, nuts and vegetables here for three decades. But recently, widespread water scarcity in this part of Sri Lanka has made his work difficult.

The region used to receive frequent heavy rain year-round, he says. “We could cultivate at any time. Now, since the rain is less, we cultivate during the rainy season only.” Due to the drought throughout Yala season – the dry season that runs from May to August – his 1 acre of land yields half as many groundnut crops as years past.

Selvareththinam, and others farmers in this northern region, face a new reality. He is forced to rely on the small amount of water that seeps into his well during the rainy season to irrigate the farm twice a day. He limits well-water use at home, he says, so he can use more of it on his crops. But he still struggles to give them enough. Sometimes he’s compelled to use water from his neighbors’ wells. He thanks them with occasional gifts of vegetables and groundnuts.

“Earlier we had water in the pond, and because of this, the wells had sufficient water,” Selvareththinam says. “Now the pond itself is dry, so how can water be in the well? How to cultivate?”

By October 2019, more than 634,000 people across the country were affected by drought, according to Sri Lanka’s disaster management center.

A thriving private water trade has sprung up to address the decrease, with some individuals buying supplies from households closer to the paddy fields that have more water in their wells than those farther away. 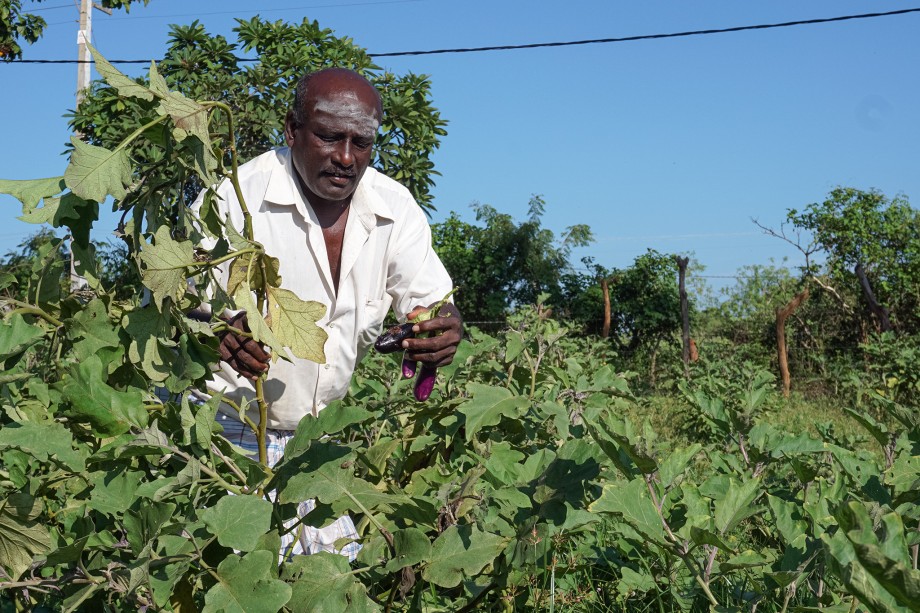 Kunasekaram Ariyasri harvests vegetables from his plot of land in Cheddikulam. Ariyasri has recently switched to a drip irrigation system in response to dwindling groundwater. \

But the business isn’t stable. At any given time, he has anywhere from four to 50 customers, he says, and they are often unreliable.

“After travelling 7-8 kilometers (5 miles) to deliver, [customers] will say, ‘We have bought it somewhere else,’” he says. “Sometimes I get very angry.”

Sivakumar Subramaniam, head of the civil engineering department at the University of Jaffna, partly blames the dwindling water supplies on intense rice cultivation during Yala season. More than 1,500 hectares of land were cultivated in the district during the 2019 Yala season, according to data from the Department of Agriculture.

Subramaniam says farmers should consider switching to grains and crops that require less water, such as lentils, beans or mangos.

Rather than changing crops, some farmers have adapted their methods. 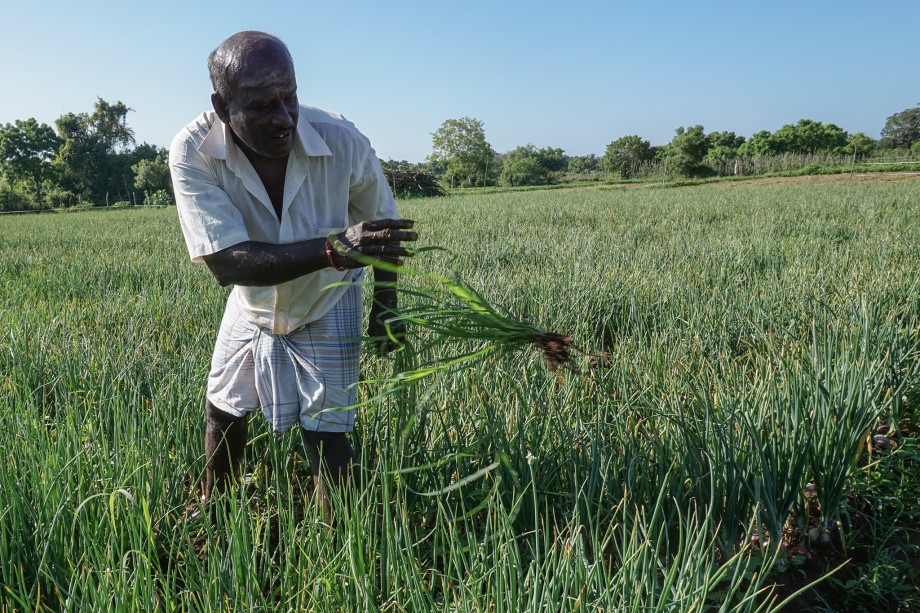 Ariyasri says his new irrigation system has allowed him to quadruple the area he farms during Yala season.

Kunasekaram Ariyasri, 60, has farmed in the region since he was 13. But in recent years, he says he’s switched to drip irrigation to reduce water loss. After investing 400,000 rupees ($2,200) in a new watering system, he’s able to irrigate 2 acres of land during Yala season, he says, versus the half an acre he managed before.

“Twenty years ago, we had water in the well just 15 feet deep,” he says. “Now, even if we dig the ground more than 32 feet deep, we cannot see the water.”

The Sri Lankan government is trying to combat the drought’s effects by restoring abandoned ponds and increasing their depth as well as digging canals with help from the United Nations-backed Green Climate Fund, says Rajaratnam Vijayakumar, assistant district commissioner of the Vavuniya Department of Agrarian Development.

And though the drought has been tough, Selvareththinam has no intention of giving up.

“I’ve been farming for 30 years,” he says. “It’s the only job that I know. Whatever the challenges may be, I will continue.”