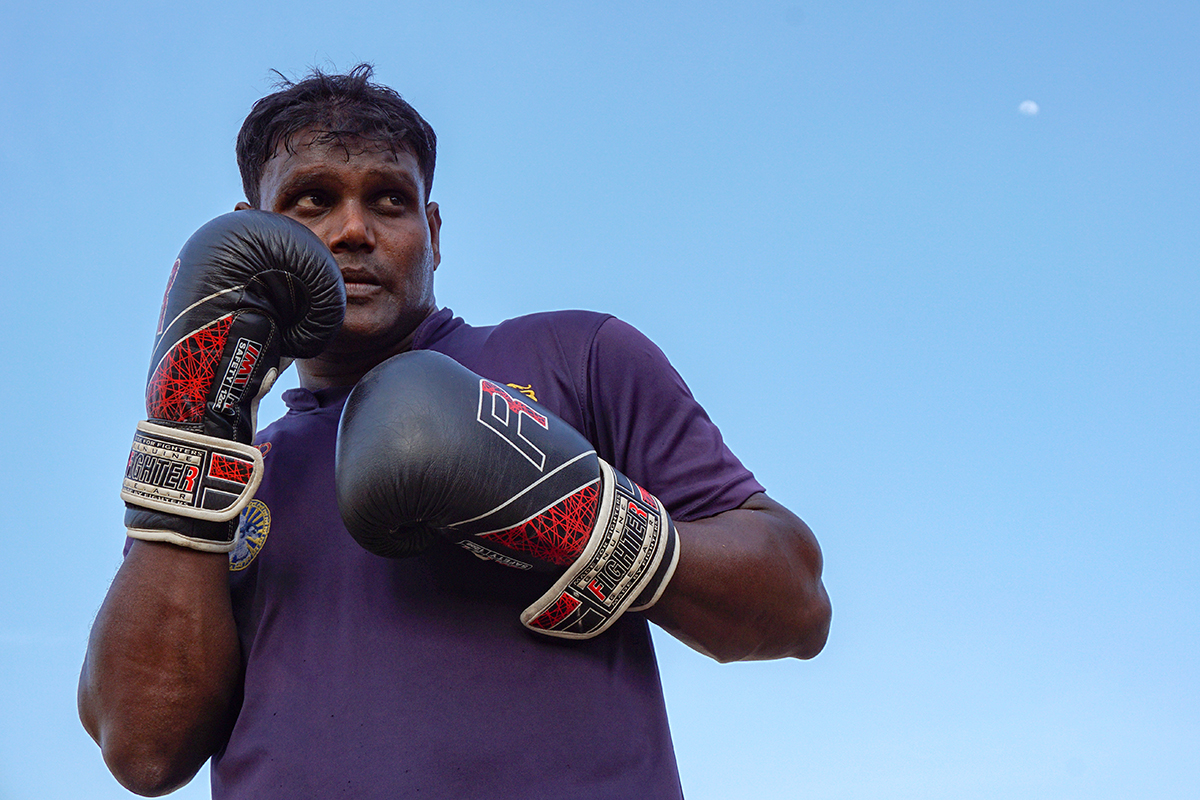 ALVAI, SRI LANKA — Students stand in a row on a quiet playground, waiting patiently for their teacher, Rangithanathan Ramesh. One by one, each student steps forward, and Ramesh offers them a blessing, a sign of permission to begin their training.

Then they raise their hands – in boxing gloves – up to their ears and maintain fierce eye contact with one another. The students begin to exchange blows, the movement of their feet raises dust that intermingles with the vocalizations of combat, the sharp exhalations with each punch.

Here at the playground in the Alvai village in the Jaffna district and the nearby Revady beach, Ramesh, a decorated boxing champion, is passing on his expertise to his eager students. 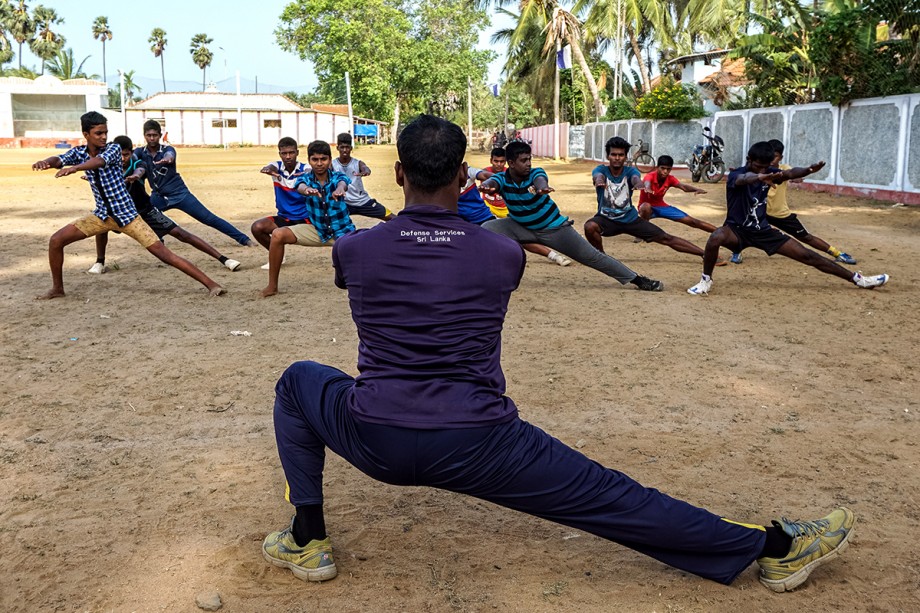 Rangithanathan Ramesh leads his students in breathing and stretching exercises every evening.

For the past five years, Ramesh has been offering his boxing training free of charge four days per week. Many of his trainees, he says, can’t afford the price of lessons. Each year, more young men have joined his training sessions, and now he works with 35 students, sometimes buying them shoes and gloves with his own money.

It’s a way of giving back, he says. His work with the local community is also a source of pride, as some of his students are now decorated boxing champions themselves.

Ramesh has been interested in boxing since he was a child, when he would watch the sport on television, he says. He began training at age 15.

Since then, he’s won 12 gold medals in boxing competitions in Sri Lanka’s Northern Province, and he won four bronze medals at national-level competitions. He won his last gold medal in 2016.

All the while, he’s grappled with the risks of the sport.

He’s been injured many times. In 2010, at a competition in Kandy, he suffered a blow to the head that put him into a coma, he says. 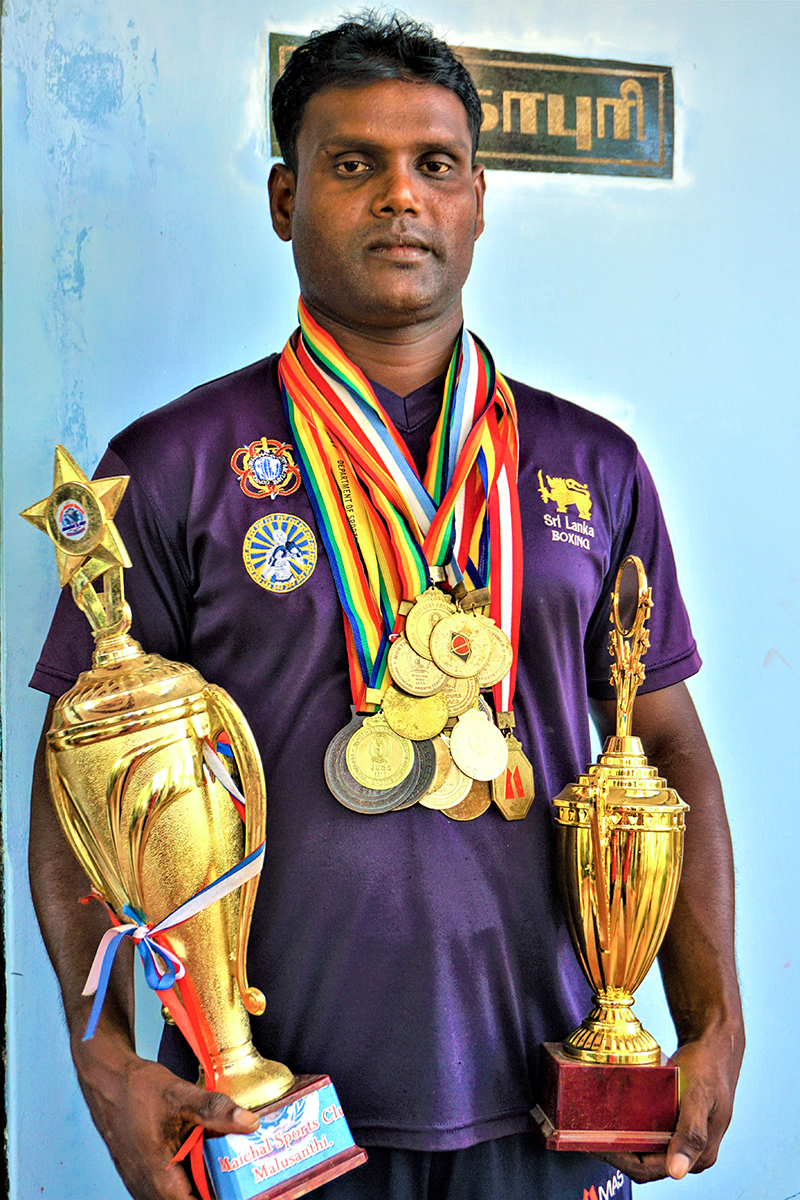 Under his instruction, Ramesh’s students have won silver and gold medals this year.

Despite the dangers of the sport, boxing has experienced a resurgence in popularity since Sri Lanka’s civil war ended in 2009. Ramesh noticed that young people were becoming more interested in boxing, so he offered to train them.

Ramesh says he offers his training for free, as a way to give back and because of his own background.

“I give free training, considering the difficulties I faced economically when I was a child,” he says. Some of his students travel from far away and don’t have much money, so he wants to help as best he can, he says.

Rajathurai Kaneshamoorthy, a boxing trainer, says that many parents in the Tamil community are not willing to spend money on sporting equipment or training.

“This social activity of Ramesh will encourage the students,” Kaneshamoorthy says.

Kunasekaram Dilaiksan, 18, has been training with Ramesh for the past year. He’s noticed positive changes in his physique and in his mindset.

“Due to shyness during my school days, I did not take part in any events,” he says. “But now I am not shy, and I take part in all the events.”

He was also inspired by his brother, who had issues with breathing and wheezing since childhood.

“But after he started the training in boxing, it has completely stopped,” Dilaiksan says. “He says that boxing is therapeutic for him.” 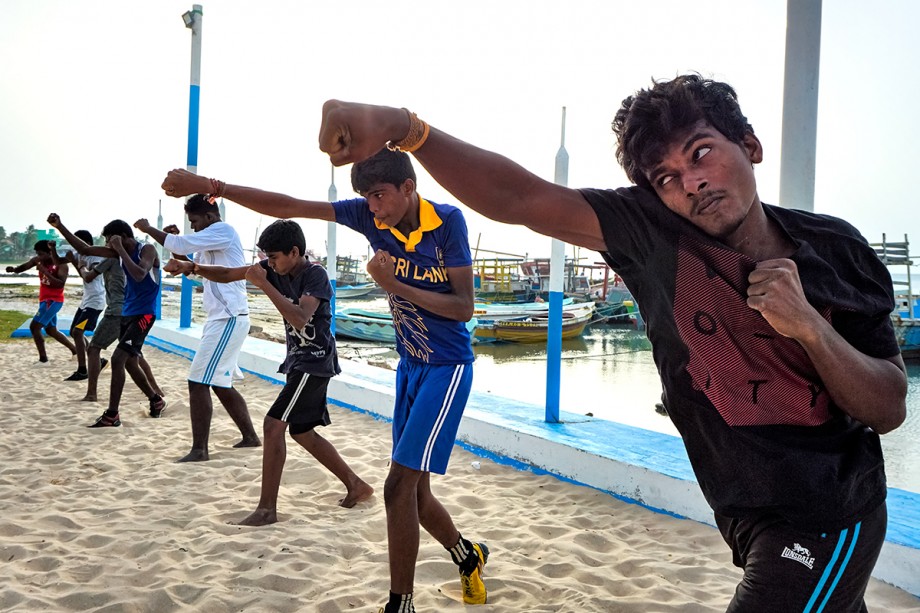 Ramesh’s students say they train with him because he’s the best and because of his character.

Dilaiksan says he trains with Ramesh not only because of Ramesh’s prestige and skill in the sport, but because of his courtesy and his character and because he understands the economic struggles of some of his students.

Ramesh plans to continue training his students, but he also wants to establish self-defense boxing training for local women. He’s also begun making arrangements with the Sri Lanka Ministry of Sports to get greater support for a boxing association in the Jaffna district.

His students have seen great success under his tutelage. In local boxing competitions, Gunasekararam Gunajoth, 23, won a gold medal in 2016 and a silver this year; Sridharan Sivavishnu, 20, also won a gold medal this year.