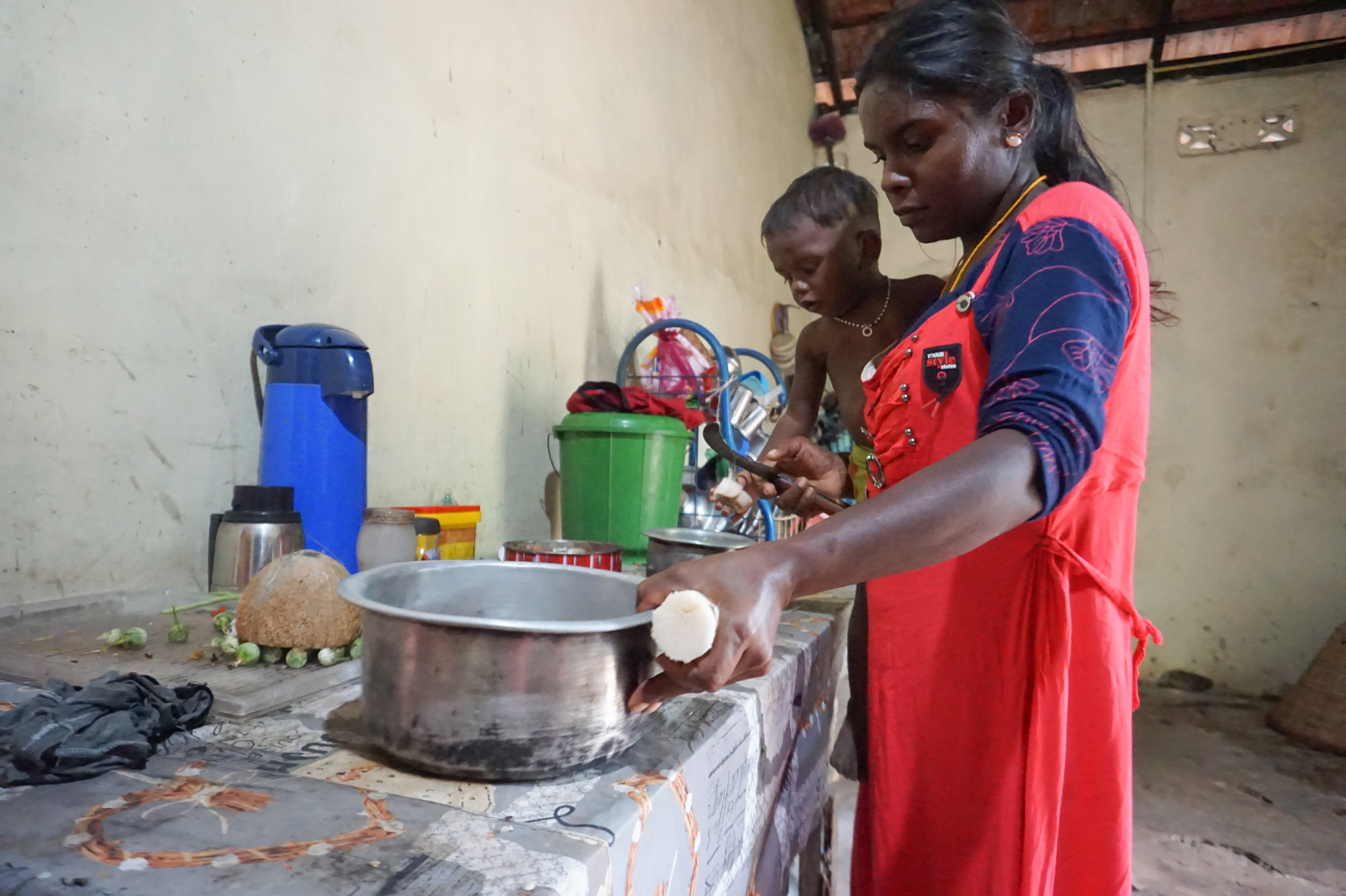 MUGATHTHANKULAM, SRI LANKA — After a day of cleaning the homes of wealthy Sri Lankans, Vinotharan Subani rushes back to her family for dinner. Since the nation’s economy cratered in recent months, every day feels like a scramble to feed her three young children. Vinotharan’s husband lost his job as a mason. Vinotharan, 28, picked up cleaning and gardening work, but groceries are so expensive, they might as well be jewels. The family stopped eating meat. The kids might get eggs once a month. Sometimes there are only enough vegetables and rice for the children, and Vinotharan goes to bed hungry.

The strain is visible in her two youngest children, their arms and legs as thin as sticks. Her 1-year-old son is 6.5 kilograms (14 pounds) but should weigh closer to 10 kilograms (22 pounds). Her daughter is two years older and not much heavier. The family lives in Sri Lanka’s Northern Province, amid a sweep of ponds and fields about 260 kilometers (162 miles) north of Colombo, the country’s commercial center. Standing in her kitchen, Vinotharan lights the stove to make banana-stem curry and rice, her youngest wrapped around her waist, crying. “What to do?” she says with worried eyes. “We are finding it difficult to feed three times a day, and in this situation, we don’t know how we shall be able to provide nutritional food.”

For much of the last year, an unprecedented economic crisis has hobbled Sri Lanka, the result of skyrocketing debt and plummeting tourism and remittances, the money Sri Lankans abroad send home. Incomes dwindled while inflation soared, emptying kitchen shelves and robbing children of food. Close to 12% of children 5 and younger are moderately underweight, according to a Ministry of Health report, a jump from 7.5% just two years ago. In general, children are eating fewer vitamins and minerals than the World Health Organization recommends. The government also gutted funding for a school lunch program that gave students daily servings of chickpeas, fish, milk and eggs. 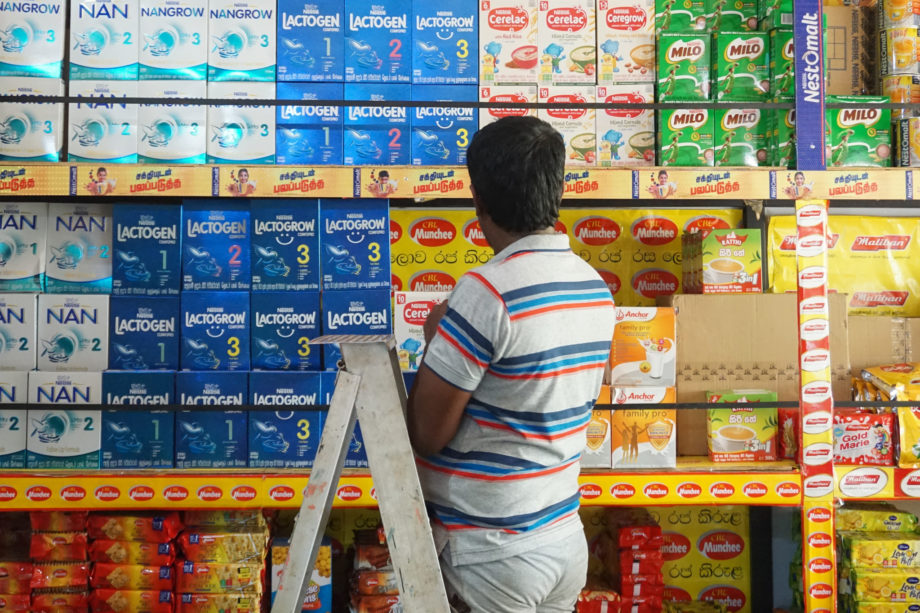 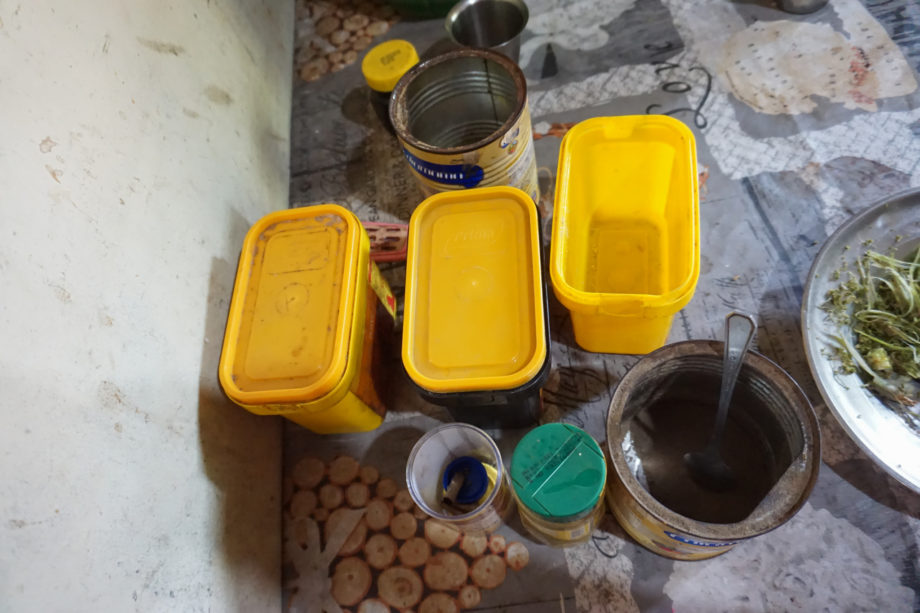 Rising inflation is emptying kitchen shelves across Sri Lanka. At the Surenthiran Shop in Cheddikulam, people are buying so little that the owner, who used to restock every week, now only does so every two to three weeks.

The World Food Programme, a United Nations agency, has distributed food and cash assistance to tens of thousands of families, and the Sri Lankan government is considering new programs to feed hungry people. But with more than one-quarter of Sri Lankans facing food insecurity — a number expected to grow — assistance may come too late for children whose physical and mental development is at risk if they aren’t fed properly. What a child eats from birth to their second birthday — a period nutritionists call “the golden window” — is closely linked to their well-being. Malnourishment can weaken the immune system, stunt brain development and, long term, increase the risk of diabetes, cancer and premature death. Dr. Vishnukumar Sivapatham is a lecturer in pediatrics at Eastern University in Sri Lanka. “It is a matter of concern that the opportunities available to our society for becoming a better generation are a little less for children suffering from malnutrition,” he says.

But getting children the nutrients they need grows tougher by the day. The price of a nutritious meal has shot up 156%, according to a Ministry of Health report, turning items rich in protein, carbohydrates, iron and calcium — the building blocks of healthy brains and bones — into luxuries. Surenthiran Murukan runs a grocery store in the small town of Cheddikulam, a short drive from Mugaththankulam. As prices shoot up, sales drop. While he used to restock every week, he says, people are buying so little now that he only does so every two to three weeks. 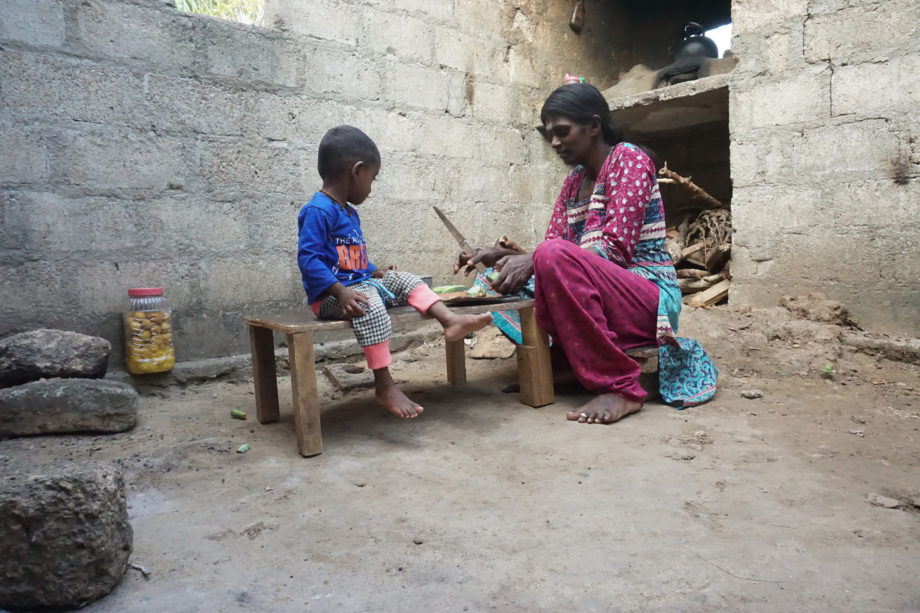 Pathmanathan Arasilagkumari prepares a meal for her 2-year-old son at her home in Sanmugapuram, Sri Lanka.

One day in nearby Sanmugapuram, Pathmanathan Arasilagkumari mashes rice with dal to feed her 2-year-old son, a boy with inquisitive eyes and his fingers wedged in his mouth. He is 7 kilograms (15 pounds) — at least 2 kilograms (4 pounds) underweight. Pathmanathan’s husband does masonry jobs on the rare occasions he can find them; she doesn’t work. In recent months, the couple has eaten just two meals a day so their son can have three. They only drink tea because milk is too expensive. Even so, they sometimes borrow Sri Lankan rupees from a neighbor to afford rice, legumes and sprouting greens; failing that, they catch fish in a nearby river. “My son would like an egg, but I don’t have the privilege to get an egg for him. The doctors prescribed milk powder for my son, but we don’t have money to buy it,” says Pathmanathan, 32. “Every month, when I find that the weight of my child is not increasing during the checkup, I feel worried.” Her eyes brim with tears.

Sri Lankan officials are troubled by the escalating hunger. Dr. Keheliya Rambukwella, the health minister, says in an interview that the government is starting to roll out a “foster parent program” for underfed kids. “Basically, some parents or sponsors will take care of the children and ensure that they don’t remain malnourished until the food supply improves in the next three months,” he says. In a recent speech, President Ranil Wickremesinghe promised cash aid to tens of thousands of families in need of food. Civil society groups are pitching in, too, distributing food and offering seeds and training to people who want to start home gardens.

Elsewhere in Sanmugapuram, Jone Thomas Pavitha feeds her 1-year-old daughter papaya slices for lunch. The little girl laughs as juice runs down her chin. Jone Thomas, 30, gets little help from her husband. He doesn’t work, but he won’t watch their daughter, so Jone Thomas can’t work either. Money is so scarce that they can barely afford cowpeas and legumes. While their daughter is of normal weight, she recently underwent surgery to repair a hole in her heart, and Jone Thomas fears that not feeding her nutritious foods could harm her recovery. Not long ago, she did something she never thought she would: She took her ring and necklace to a pawn shop and used the proceeds to stock her kitchen.