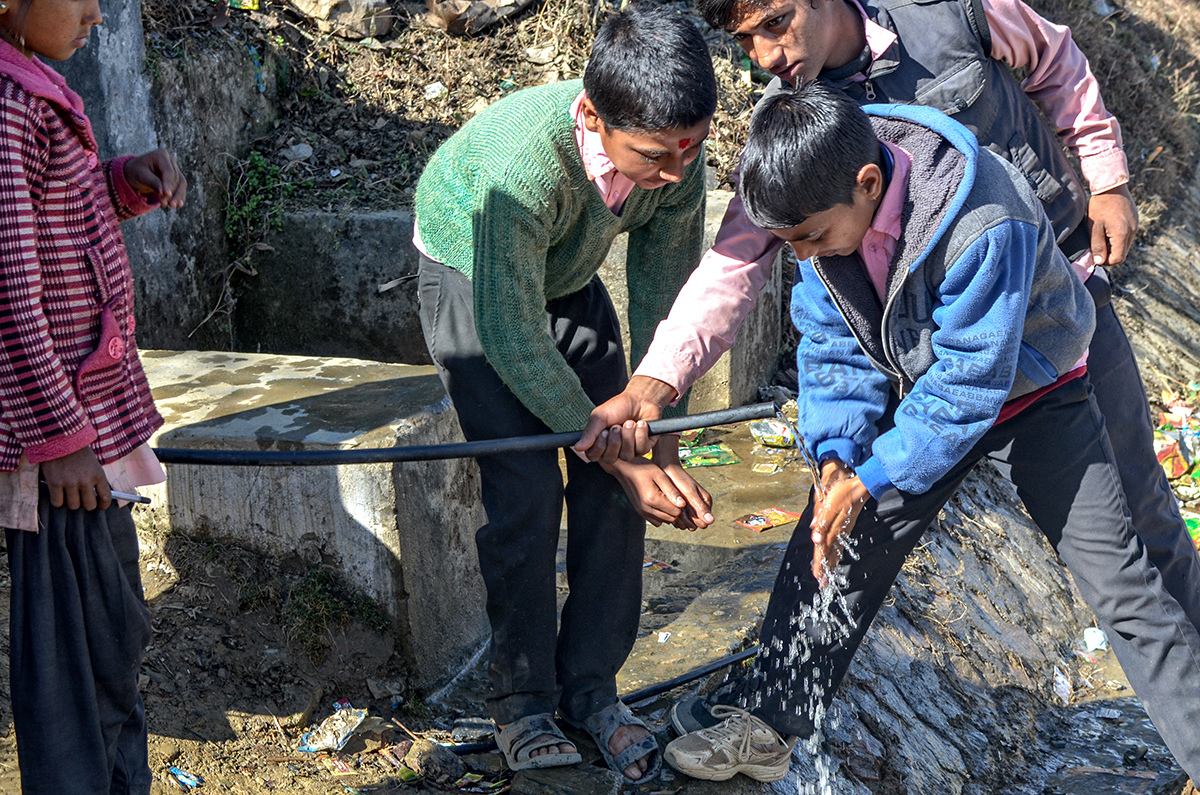 DASHARATHCHAND, NEPAL — It’s 1 p.m., and students at this rural school have just been let out of class for lunch. A group of them rush to the school’s only block of toilets, cupping their hands over their noses as they get closer. Others gather in the school compound and surround two large water tanks with pipes attached. Water trickles from the pipes, then stops.

Shital, who lives an hour’s walk away from Shree Manilekh Higher Secondary School in the Dasharathchand municipality of Nepal’s western Baitadi district, says students usually return home during the school day to use the toilet. Other times, they are forced to defecate in open spaces, she says.

Despite the government’s increased spending in the education sector, some schools in the Baitadi district lack basic amenities and regularly experience water shortages, which experts say disrupts learning.

An estimated 86 percent of Nepal’s population has access to basic water supply facilities, according to a 2016 government report. But safe water remains scarce for those living in remote, mountainous areas. Some sources are drying up, others are contaminated, and many people can’t afford to buy water. Adequate sanitation is also inaccessible for a large portion of the population, according to WaterAid, an international nonprofit. 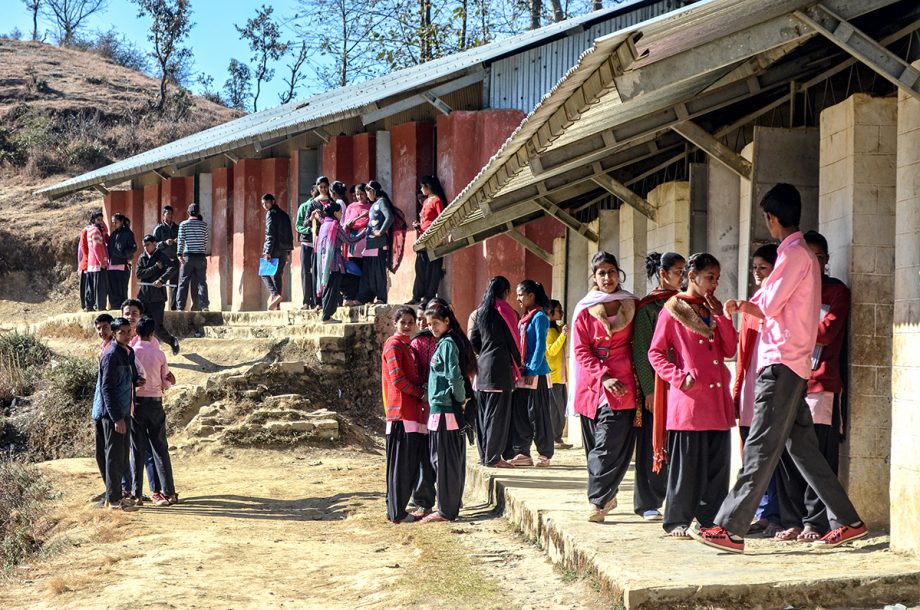 Students at the Shree Manilekh Higher Secondary School in Nepal’s western Dasharathchand municipality stand outside their classrooms during a lunch break.

Nonprofits in the Baitadi district have spent approximately 600,000 Nepalese rupees ($5,635) this fiscal year on water, sanitation and hygiene-awareness campaigns, says Lal Singh Ter, former district education officer. But poor toilet facilities are still common in schools, with some running out of water. While 330 schools in the district have clean water, 211 are still lacking, Ter says.

Students miss classes because they have to look for toilets with running water, says Bidhyanath Koirala, former head of Tribhuvan University’s Central Department of Education. The 2010-11 Nepal Living Standards Survey revealed that 25 percent of dropouts stopped going to school because of poor academic progress. During the 2012-13 fiscal year, 3.8 percent of primary-school students and 6.4 percent of secondary-school students in the district dropped out, Ter says.

Advocates blame underfunding. Though officials have discussed allocating 20 percent of the national budget to the education sector, the current budget indicates that the education sector accounted for 9.91 percent of the total, according to National Campaign for Education-Nepal, a local advocacy group. The 2017-18 allocation for the sector is 126 billion rupees ($1.1 billion), an increase from 115.83 billion rupees ($1 billion) in 2016-17, according to government budget figures.

The government is using 1.34 billion rupees ($12.5 million) of its 2017-18 education allocation to improve sanitation facilities in schools, says Arjun Dhakal, section officer at the Department of Education’s Program and Budget Division. This fiscal year, 2,234 toilets have been built in schools across the country, he says.

But some schools have been left behind. Collected in tanks, rainwater is the primary source of water at Shital’s school, where 750 students attend. During monsoon season, from June to August, the tanks are regularly filled, but water runs out after just three days, says Dambar Datta Pandey, vice principal at the school. 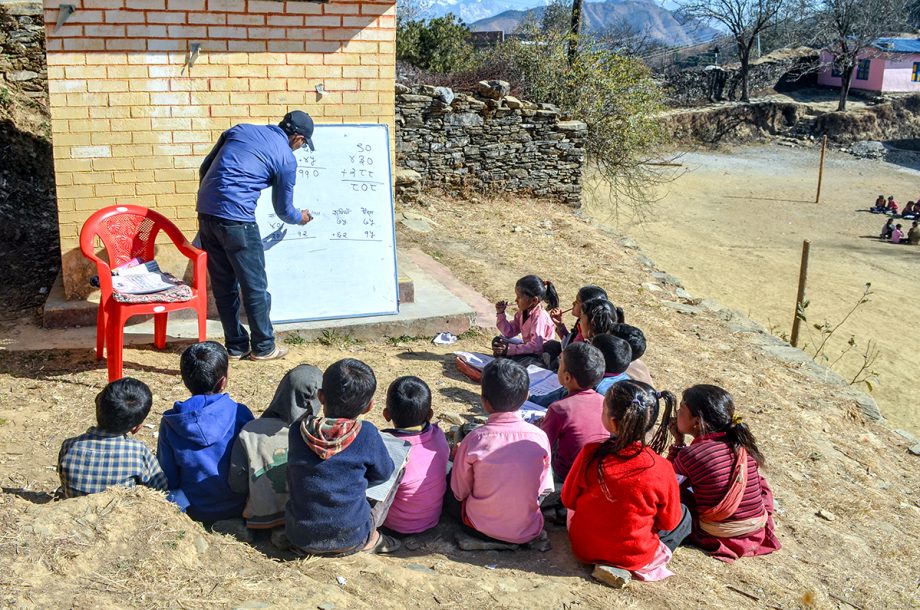 A teacher instructs students at a rural, primary school in Dasharathchand municipality.

The school’s supply once came from a body of water 6 kilometers (3.7 miles) away. Ten years ago, the government built a pipe connecting the school’s facilities to the water source, Pandey says. Six years later, the pipe was destroyed during road construction. The school’s administration can’t afford repairs, he says. So, toilets are frequently closed.

“Now there is a condition of closing the toilet, because there is no water available in the school,” he says. A janitor fetches a bucket of water each day, in case teachers have diarrhea, he adds.

“When it’s menstruation period, I do not come to school for four days,” she says. “I cannot change sanitary pads at the school.”

Lack of water also limits other activities at the school. Ganesh Datta Bhatta, a cook at the school’s canteen, says he walks for nearly half an hour to fetch water from a source often crowded with residents.

“I have to queue up for hours at the water source, to get my turn to collect water,” he says.

Despite the government’s efforts to bring water closer to remote communities, challenges such as mountainous terrain have delayed the process, Dhakal says. It is difficult to dig wells and build infrastructure at high elevations, he says.