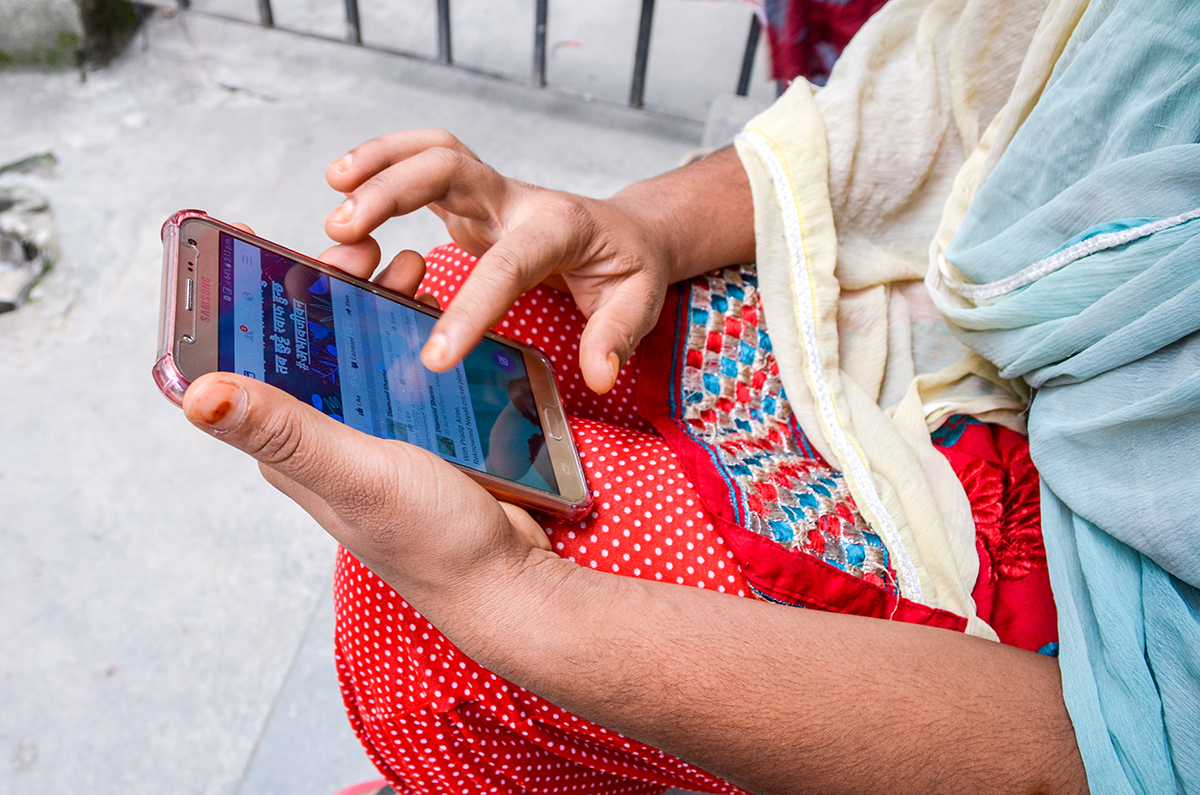 KATHMANDU, NEPAL — The Jhapa district is more than 600 kilometers (about 373 miles) from Kathmandu, the capital city of this tiny Himalayan country. But when Sumi’s ex-boyfriend posted online photos of her, digitally altered to make it appear that she was posing nude, she had no choice but to make the trip.

But 81 percent of all Nepalese live in rural areas and the country has few major highways to connect regions. Coming to Kathmandu is often a punishing, expensive journey and complainants like Sumi say they’re not even given the courtesy of an estimate on how long they’ll have to remain in the city.

“It has been five days that I came to Kathmandu. So far, the case has been only registered. I don’t know when I have to come again for the case and how long I have to remain in Kathmandu,”she says, visibly frustrated.

The Nepal Police’s crime division receives 20 to 25 new cases of cybercrimes every day from across the country, most of which are some form of an attack against a woman, says spokesman Prakash Jung Karki.

Cybercrimes, and the online display of sexually explicit images for the purpose of revenge in particular, are on the rise in Nepal. One hundred and seventy-five cases were filed in Kathmandu District Court between July 15, 2011 and July 15 of this year, Tika Khatri, a court official, told GPJ. Thirty-eight of those cases were registered in 2016 alone. The majority of all of those cases were related to crimes against women, he says.

Khatri could not confirm the number of people who have been convicted of cybercrimes because those records are kept manually, and therefore are not easily searchable. GPJ requested specific data from police, court, jail and prison officials, all of whom said that it’s extremely difficult to collect exact numbers.

Bed Prasad Kharel, an official with the Department of Prison Management, told GPJ that there are three prisoners in the prison system’s central facility serving sentences related to cybercrimes.

Cybercrimes are usually prosecuted under Nepal’s laws related to libel and defamation or those that address computer-related crimes, says Pabitra Raut, a lawyer who has handled cybercrime cases.

Those laws include a range of fines and sentences, including a jail term of up to five years, for actions on electronic media that jeopardize relationships or reveal indecent or immoral behavior.

The rising number of cybercrime cases is in line with Nepal’s online connectivity rate, which has rapidly increased in recent years. There were about 15.4 million data and internet subscribers as of March, according to the Nepal Telecommunications Authority. That is about 53 percent of the total population, up from about 755,000 subscribers in early 2010 – which was less than 3 percent of the population at that time.

But as internet use has spread, awareness about online safety has not.

“There has not been much awareness about the internet and technology despite their massive expansion,” says Purushottam Khanal, a director at the Nepal Telecommunication Authority.

The Nepal Police’s crime division receives 20 to 25 new cases of cybercrimes every day from across the country, most of which are some form of an attack against a woman, says spokesman Prakash Jung Karki. Most of those cases are related to character assassination, he says.

It can be near-impossible for a Nepalese person, particularly a teenage girl, to overcome the stigma attached to the public posting of a sexually explicit image.

At the very least, she says, the government, which becomes the petitioner in cybercrime cases, should make it easy for people to make formal complaints. Since such crimes occur all over the country, people should be able to pursue justice wherever there is access to technology, including at local police branches, she says.

Chaudhary, the police superintendent, says that while complaints must all be filed in Kathmandu, the Nepal Police agency has a nationwide drama program, a school program and a radio set intended to raise awareness about cybercrimes.

It has been five days that I came to Kathmandu. So far, the case has been only registered. I don’t know when I have to come again for the case and how long I have to remain in Kathmandu.Sumi, an 18-year-old who traveled more than 370 miles to file a formal cybercrime complaint against an ex-boyfriend

It’s not only students who are dealing with the problem. Sanu, 24, opened a Facebook account to keep in touch with her husband, who works in Saudi Arabia. But when she began interacting with other friends, it was easy to build a relationship with a man who later asked her to loan him money.

When Sanu asked the man to return the money, he refused and threatened to post online photos of the pair together. The photos aren’t explicit, but they indicate an intimacy that could jeopardize Sanu’s marriage, she says.

Sanu, who asked that only her nickname be published to protect her identity, traveled from Dolakha district in northeastern Nepal to register her complaint in Kathmandu. But when she got to the city, she felt untethered.

“I have neither my house here, nor do I know anybody. How to stay here?” she asks. “When am I going to get justice and go back home? It has been such a mess.”

Sumi, the young woman from Jhapa, is similarly stressed. She fell in love with a boy from her school, she says, but she tried to cut off contact when he started using drugs. The boy grew angry, she says.

“He used to say, ‘I am not going to allow you to become another’s. If you won’t be mine, I can do anything,’” Sumi recalls.

Sumi changed her cellphone number to avoid his calls and messages, so the boy started posting slanderous statements on Facebook, then the altered images.

“I could not tolerate this torture,” Sumi says.

But even despite her experience, Sumi recognizes that she is fortunate.

Not everyone has the means to come to Kathmandu to file a criminal complaint, she says.

“If this service was in the district, it would have been easier, and people like me would have received relief,” she says.