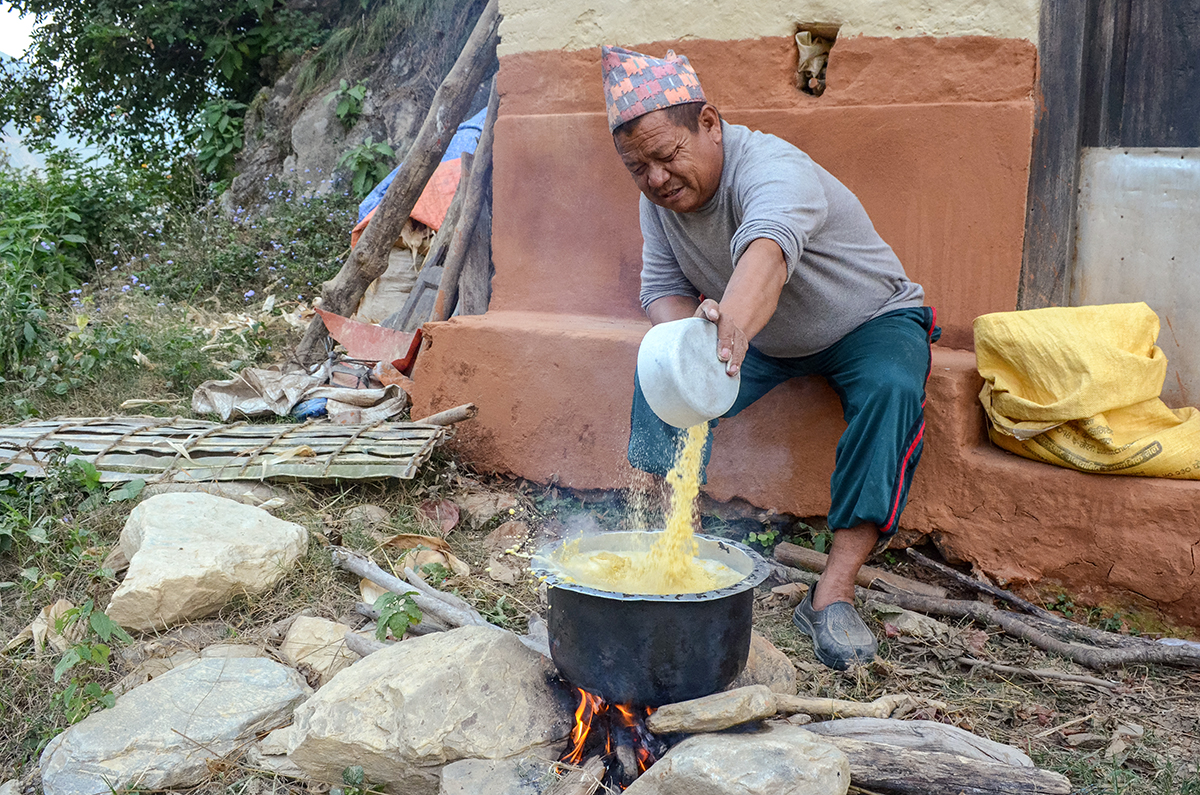 KATHMANDU, NEPAL — Early on a foggy morning, Man Bahadur Majhi, 64, builds a fire on a bed of stones near a river.

It’s cold here. Majhi shivers. But he needs to brew the alcohol that he drinks daily – a process that requires a lot of water.

“It’s okay if there is not any rice for me to eat, but there must be alcohol for me,” he says.

Majhi says he started drinking alcohol when he was 10 years old. He drank with his parents and learned to make his own brew. He makes it mostly from corn, he says, which is abundant in his village in Kavrepalanchok district, east of Nepal’s capital, Kathmandu.

It takes at least 10 days to make Majhi’s preferred libation, known locally as raksi. Some brewers make the drink in as few as five days, but the longer it brews, Majhi says, the more delicious it becomes.

“This alcohol cures my illness,” he says. “I cannot do any work if I do not drink alcohol.” 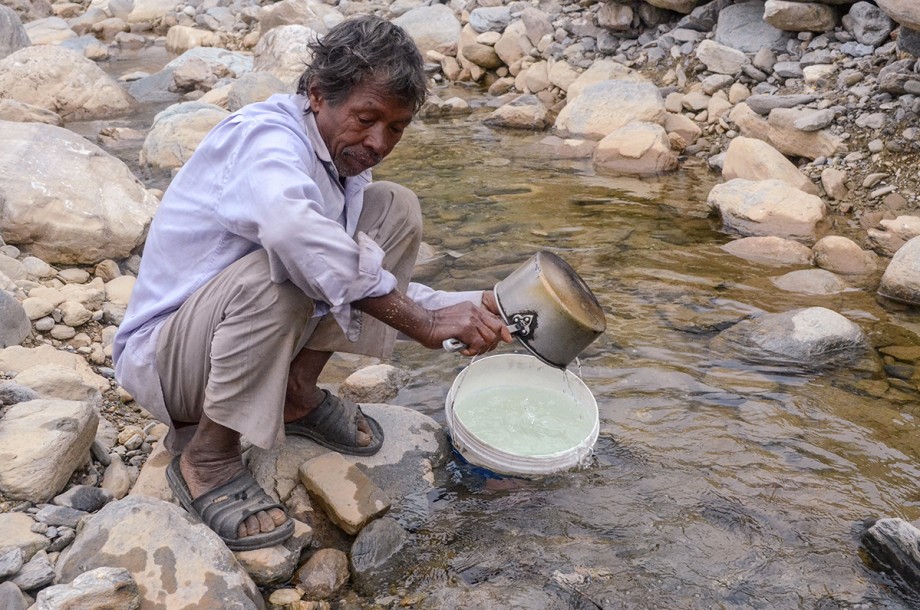 Man Bahadur Majhi fills a pot with water that he’ll use to prepare alcohol.

The Nepalese police force says it destroys close to 100,000 liters of illegally brewed alcohol, like Majhi’s, each year, and doctors say more patients than ever go to the hospital to get treatment for liver problems related to alcohol consumption.

Dr. Sudhamshu K.C., a liver specialist, says the incidence of liver disease has spiked in Nepal. More than 5,800 patients came to Bir Hospital for liver treatment in the first eight months of the Nepali year 2075, he says. That year began in April 2018 on the Gregorian calendar. About 3,000 patients came to the hospital for the same types of treatment in all of the year 2074, he says.

Among those patients, about 60 percent have liver damage due to alcohol consumption, he says, and most of those patients are farmers or laborers who live in mountain areas and drink regularly to fend off the cold or to celebrate festivals and ceremonies.

One report, published in 2016, found that about 66 percent of the men who live in low-income settlements in Kathmandu Valley consume alcohol.

Uttam Raj Subedi, a spokesman for the Nepal Police, says his agency launched a community-police partnership in October to crack down on home-brews. 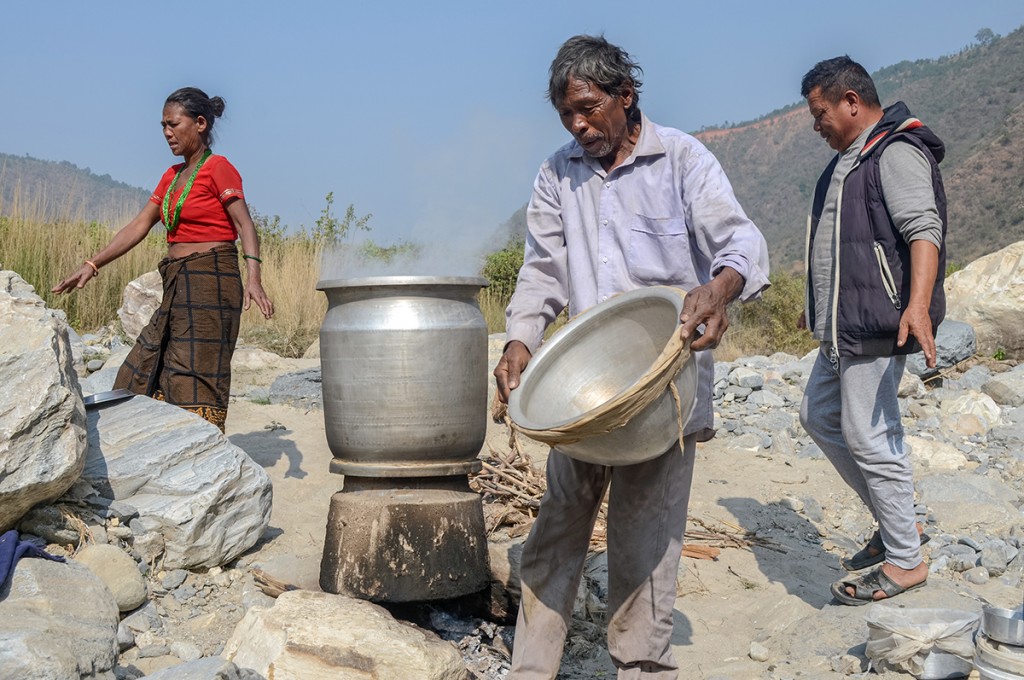 Majhi prepares vessels to use in the process of making alcohol. 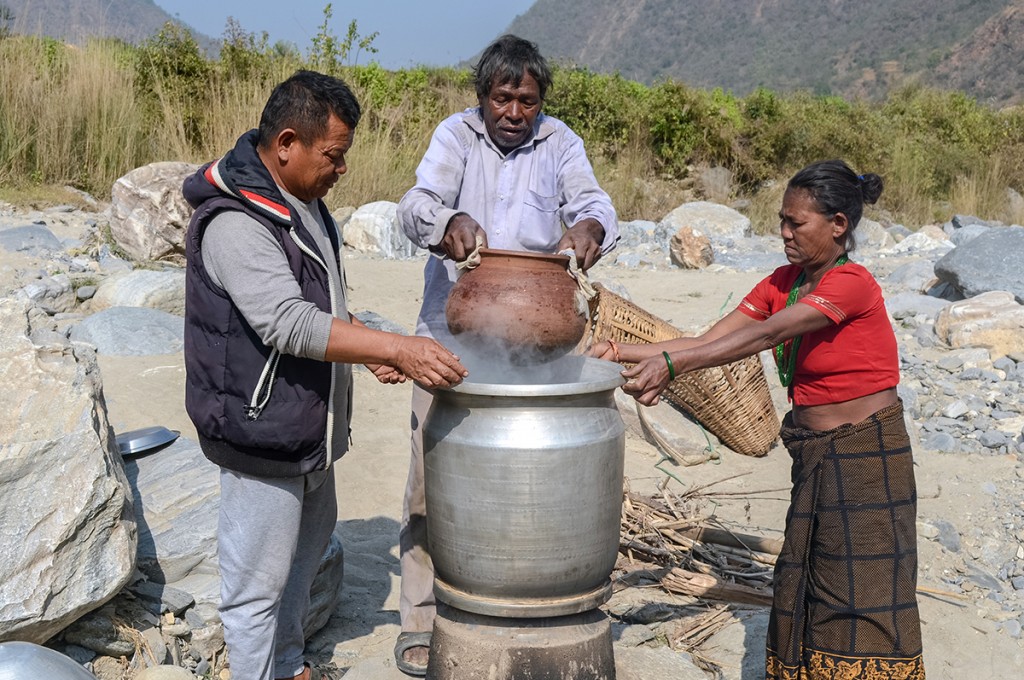 Majhi, center, works with Mahila Tamang, left, and Cheli Majhi, right, to remove a pot that contains alcohol collected through an evaporation process. The small mud pot is kept inside a vessel called a patasi, which has holes in it to allow steam to rise up and collect in the pot. 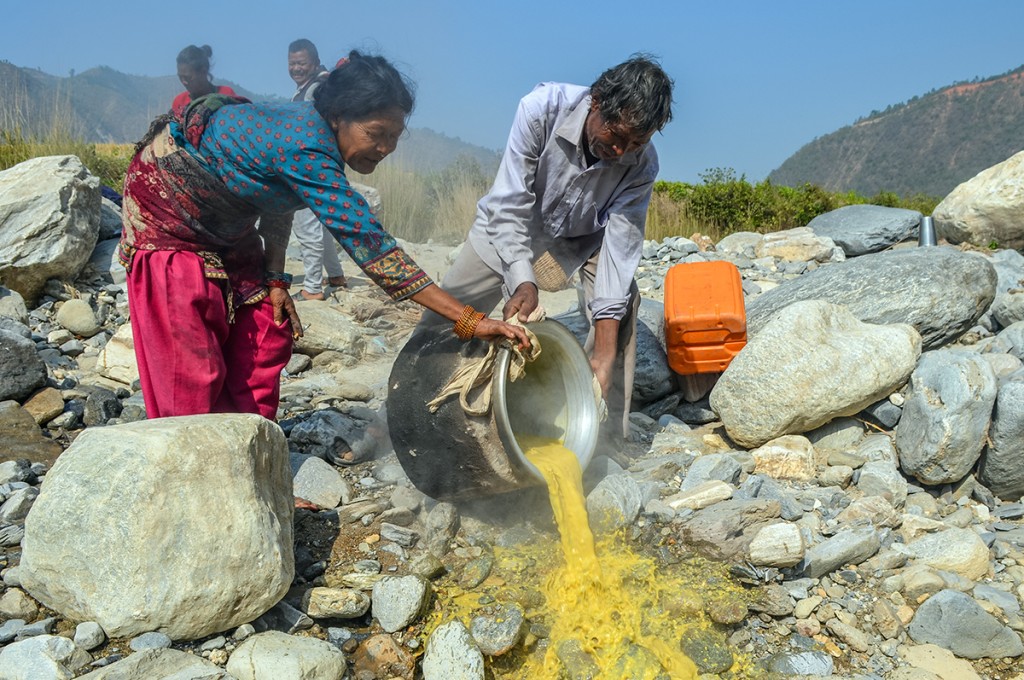 Mahili Tamang, left, says she drinks two cups of alcohol every morning and two more cups before falling to sleep at night. Here, she helps Majhi pour out a corn flour residue used to make a local alcohol that is commonly consumed in Nepal. 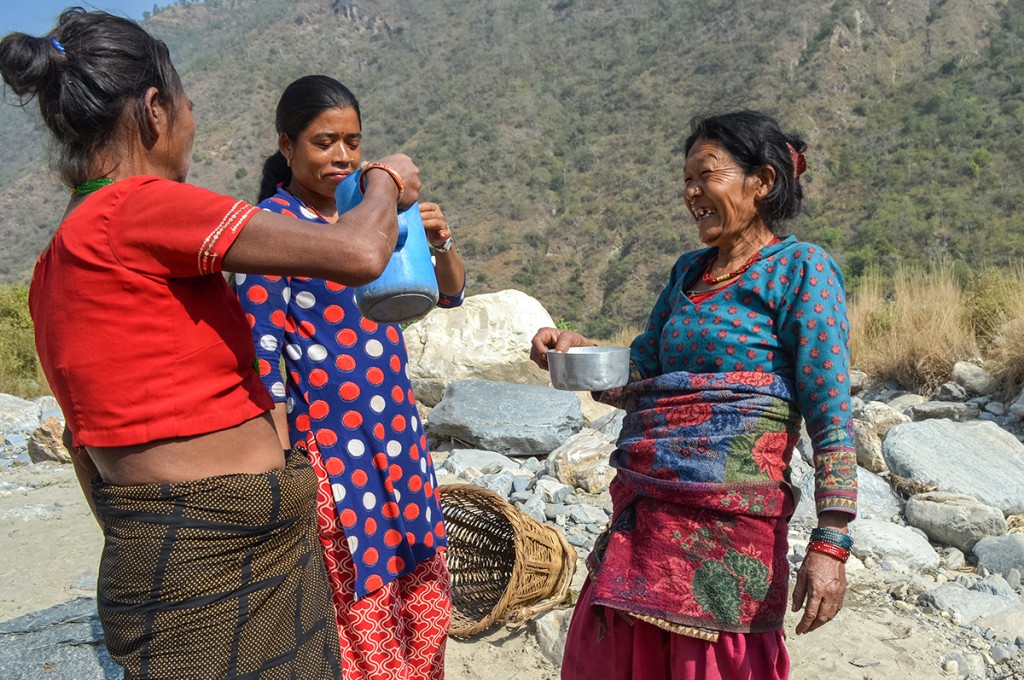 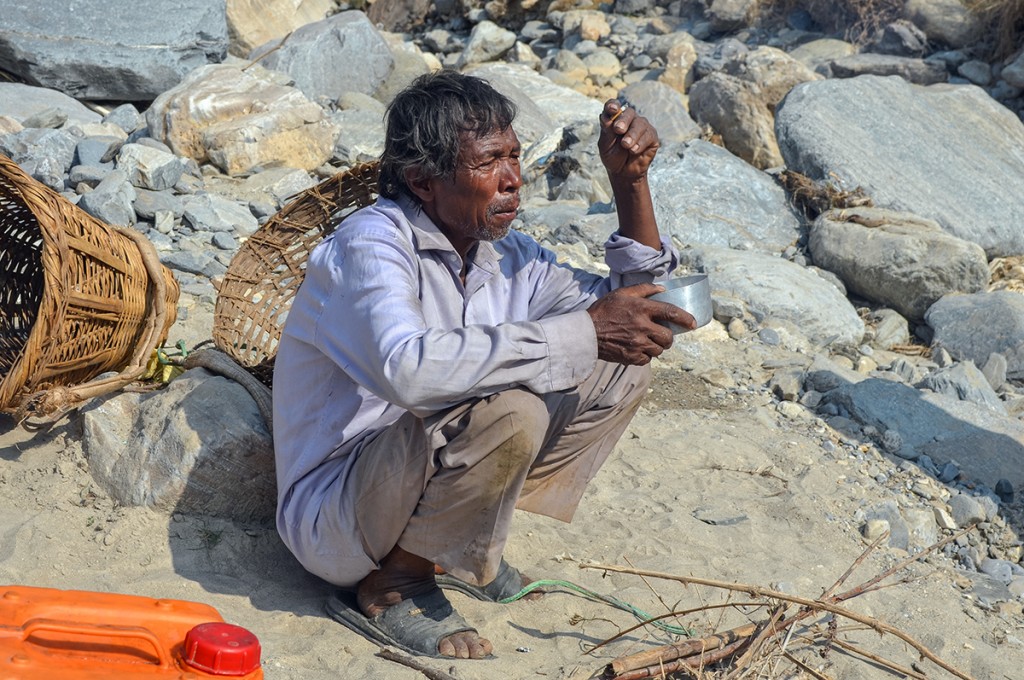 Majhi relaxes with a cup of alcohol.

But homemade alcohol is so deeply embedded in many local cultures and customs that it’s difficult to curb consumption entirely, Subedi says.

Mahila Tamang, 54, notes that many ceremonies, including weddings, require alcohol. The more alcohol served, he says, the better the event.

Many Nepalese who suffer from liver disease say they weren’t aware that alcohol can cause long-term health problems.

“I was addicted to alcohol in a way that I could not talk with others if I did not drink,” says Sanchamaya Tamang, a 52-year-old from Kavrepalanchok district who is undergoing liver treatment at Bir Hospital.

She says she came to the Kathmandu hospital after her abdomen swelled and she lost her appetite.Before, she says, it was normal for her to drink four or five cups of alcohol per day.

“How would I know that the alcohol leads to this situation?” she says. 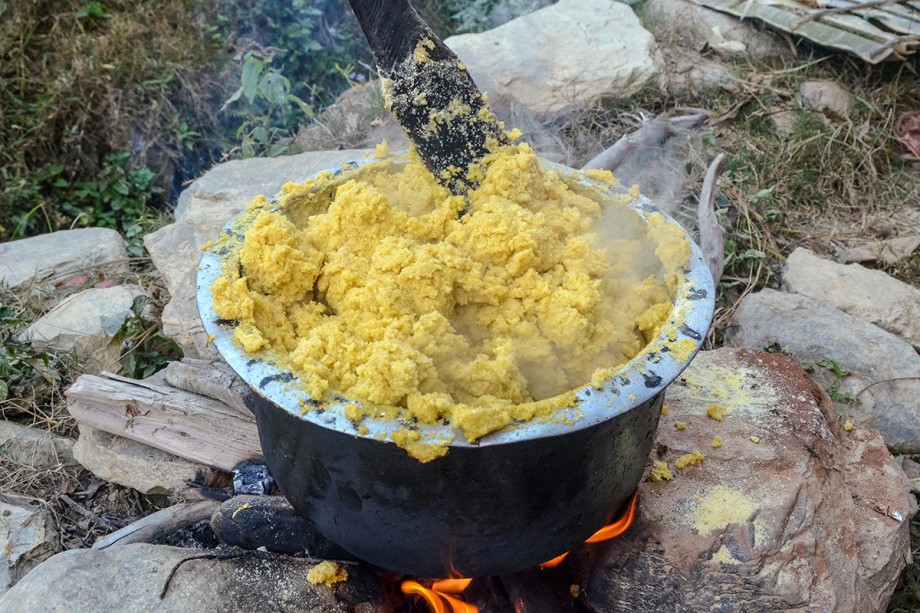 This traditional Nepalese alcohol doesn’t have an exact recipe. Some people let it sit for 10 days, while others say it’s ready much sooner. The alcohol is often consumed during traditional ceremonies.

Mahili Tamang, also 52, says she drinks two cups of alcohol every morning and two more before going to sleep. Mostly, she says, it’s to temper back pain that, before, kept her from sleeping at night and being able to stand up straight during the day.

“I could neither sleep nor could I wake up in the morning if I do not drink,” she says.

Mahili Tamang is a laborer. She harvests rice, corn and other crops, and she uses some of that harvest to brew her own alcohol. That daily liquid diet is better than an ordinary meal, she says.

“I do not need to eat other foods if I drink alcohol,” she says.