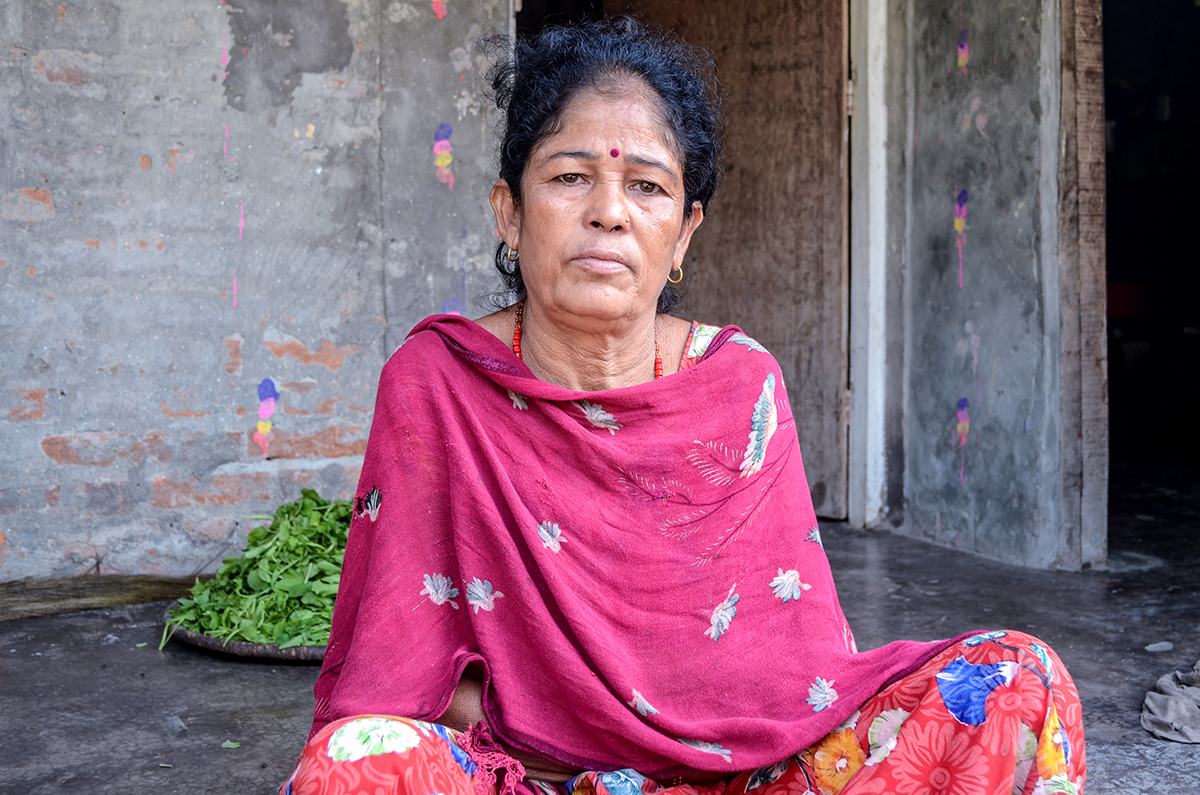 TIKAPUR, NEPAL — Kalpana Badi’s long, black hair drips with water as she sits in the sun to dry it. As her hair dries with the help of a light morning breeze, she puts makeup on her face to conceal a few wrinkles lining her cheeks and forehead.

“I am putting this cream and powder on my face for men,” she says. “This has been my daily routine for 34 years.”

Badi, 50, lives in Kailali, a western district in Nepal, where she started her career as a sex worker.

She remembers the day her mother introduced her to what would become her lifelong profession, she says.

“My mother sent me to a dark room. After a while, a fat man around 45 appeared before me. I was frightened,” Badi says of her first experience as a sex worker. She was 16. 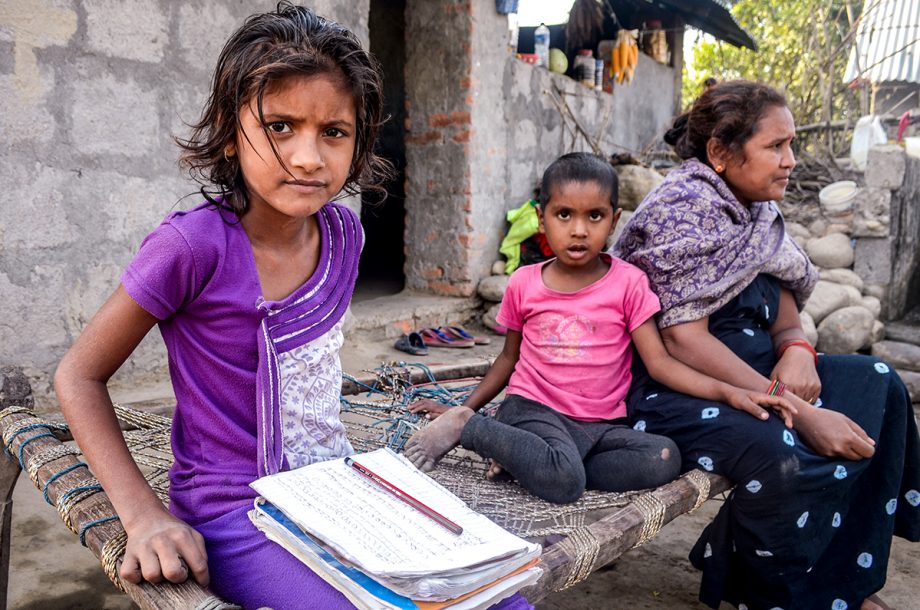 Sex worker, Krishni Badi (right), 40, sits with her children Chadani Badi (left),10, and Amit Badi, 4, outside her home in Satti, a village in the Kailali district. Krishni Badi sends her eldest child, Chadani Badi, who is doing homework, to school using the money from sex work.

Women from the Badi community, a minority group in Nepal, have historically worked in the sex trade. Members of the community say they often face discrimination from other employers because of their heritage. The government supports poor and unemployed members of the community with a portion of the national budget each fiscal year.

However, some in the community say the allocation has declined, forcing many Badi women to remain in the sex trade to survive.

Nepalese society still operates based on a caste system. The Badi, locally considered a sub-caste, rank high among the system of 22 sub-castes and are easily identified by their last names. Historically, members of the community were entertainers. They sang and danced for kings at festivals, religious occasions and special events, including weddings. But by the mid-1900s, members of the Badi community stopped performing as radios, tape recorders and other forms of entertainment were introduced by the British, says Mahesh Nepali, executive director of Badi Community Upliftment Development Committee, a government organization.

Some resorted to menial, low-paying work, while most women ventured into sex work for their survival, Nepali says.

There are nearly 70,000 Badi men and women across Nepal today, says Nepali, with a majority living in the midwestern and western parts of the country. Yet they do not own the land there or the houses they live in. 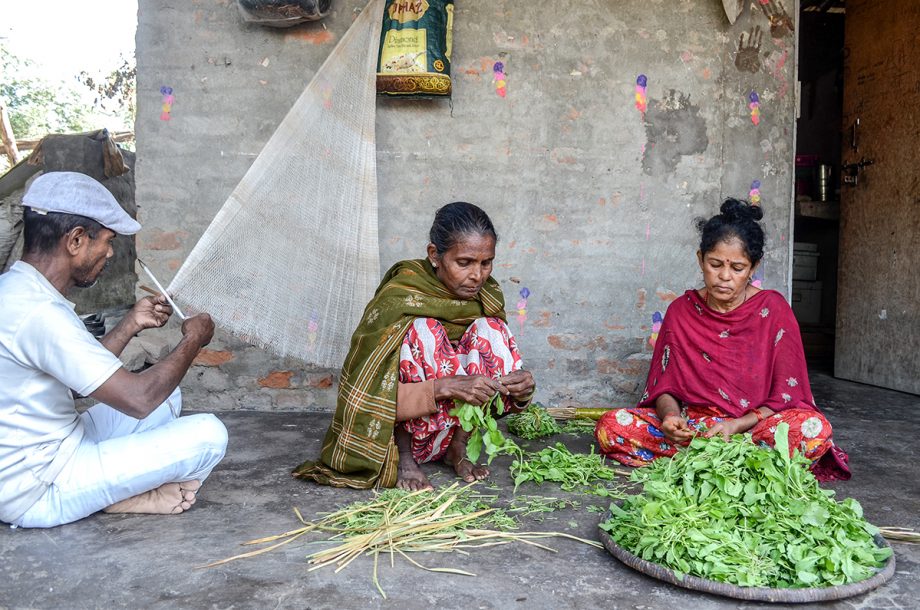 Gopal Badi (left), 53, weaves a fishnet while his wife Laxmi Badi, 51 (middle), and sister Kalpana Badi, 50, prepare vegetables for their meals. Her brother and sister-in-law also live off the earnings she makes from sex work, Kalpana Badi says.

It is difficult to provide an estimate of the number of Badi women who are sex workers, because some practice the trade in secrecy, fearing punishment from law enforcement. Sex work is not illegal in Nepal, but laws against human trafficking, sometimes targeting sex traffickers, leave some about on the legality of the profession.

In Nepal, the average household of four spends 322,730 rupees ($3,152) per year, according to the government’s 2016 household survey. But this amount of money is out of reach to many in Kalpana Badi’s community, she says.

In August 2007, members of the Badi community started a protest, asking the government for formal job opportunities, ownership of land, scholarships, healthcare subsidies and rehabilitation of sex workers.

The protest began in local villages where some protesters lived, and they marched to Kathmandu, the capital of Nepal, to join others for what became a 48-day call to action, says Uma Devi Badi, president of the Community Support Committee, a nongovernmental organization that supports members of the Badi community.

In a cabinet meeting two years after the protest, the government promised to provide Badi men and women with skills training and jobs in tailoring, livestock farming and retail, says Uma Badi. They also promised to give all sex workers grants, says Uma Badi.

The same year, the government introduced the People’s Housing Program, says Asha Pradhan, an engineer at the Department of Urban Development and Building Construction. Through this program, the government builds houses for poor, marginalized families and for people with disabilities. The government has built 10,000 houses, but the number of Badi men and women who have received houses is unknown, because the government does not store or organize recipient data by caste, Pradhan says. 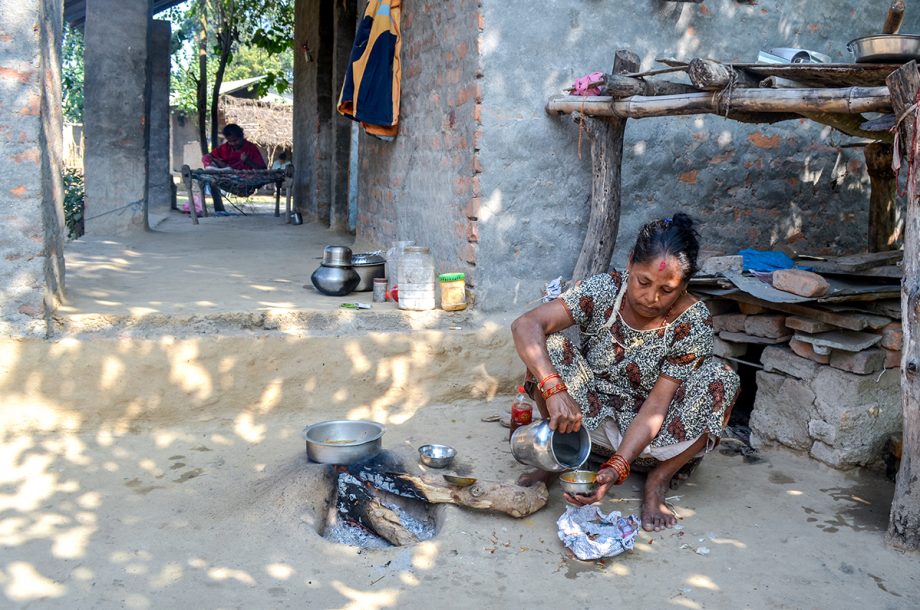 Kalchu Badi, 50, mother of Babi Badi (not pictured), cooks fish curry for lunch at her house in the Badi Tole community in Nepal’s Kailali district.

The government formalized the decision to support the community with an allocation in the national budget, says Nepali, whose Badi Community Upliftment Development Committee manages the allocation. But aid has declined recently, says Nepali.

Some women have stopped sex work because they are hopeful that the government will help them get other jobs, but most sex workers remain in the trade, Kalpana Badi says. After the cabinet meeting in 2009, she was one of 300 women sex workers in her village who received a grant of 15,000 rupees ($147).

Today, she is still in the sex trade. The one-time grant helped her take care of her family but only for a short amount of time, she says, and she has not received skills training or been offered better job prospects. Some women have tried to find other jobs, including washing dishes in hotels, but they have been unsuccessful, she says.

“The hotel owners would not give us work, telling us that nobody eats on the dishes that Badi people wash,” she says. 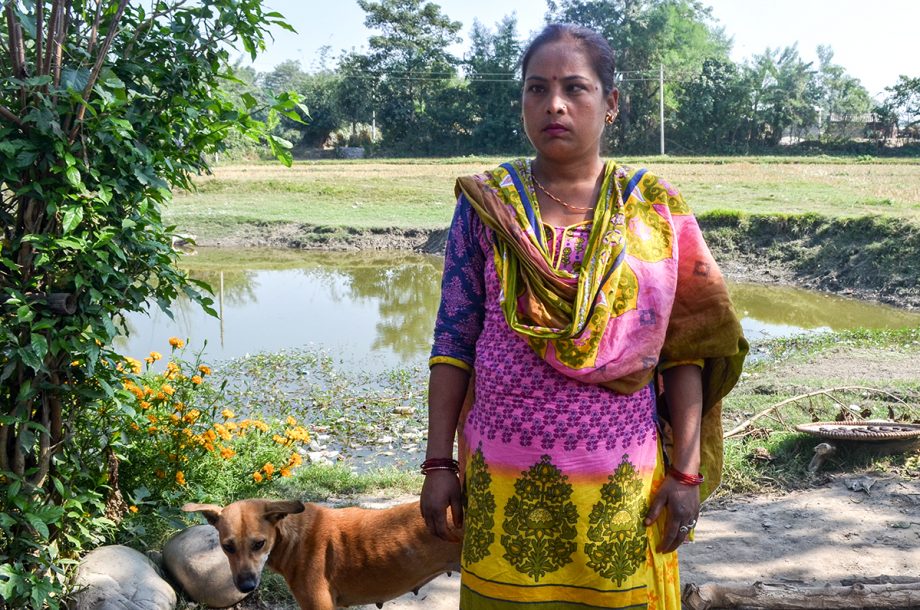 Babi Badi, 32, stands in front of her house in the Kailali district, in west Nepal. She takes care of her family of five through her sex work.

Some Badi men rely on the income of women in their families because they cannot find jobs, says Uma Badi of the Community Support Committee. Women are left with no option but to remain in the sex trade, she says.

Unlike Kalpana Badi, Babi Badi, 32, who became a sex worker at the age of 25, says she has not received a grant from the government or skills training. She struggles to take care of her 7-year-old son because she does not make much money, and sometimes her clients don’t give her the amount that she asks for, she says.

Despite declining aid, Nepali says that with the most recent budget allocation, 20 sex workers received grants totaling 78,000 rupees ($762), and 10 members of the community were given skills training. Government efforts to assist the Badi community are slow because there a lot of people that need different types of assistance, he says.

“The benefit cannot be provided to everyone at once,” he says.