Fish farming has become a popular industry in Indian-administered Kashmir, providing a steady livelihood for many – until the fish started to die. To find out why, a local university opened a fish hospital, providing treatment to the fish while determining the cause.

Photo at top: Abdul Rashid Ganai surveys his fish hatchery in Dara, a village in Indian-administered Kashmir. Ganai raises trout, but his business began to falter in 2018 when his fish started dying. Scientists say Ganai’s experience is increasingly common in the area, where new types of bacteria are appearing due to warming water.

RANGIL, INDIAN-ADMINISTERED KASHMIR — In 2013, Abdul Rashid Ganai gave up his job as a tailor to farm fish. He built a concrete tank in front of his home in the village of Dara, filled it with 600 fry – baby trout – and kept watch over them until they were big enough to sell.

Ganai’s son suggested the new job after seeing others make a profit off raising trout, one of the most widely consumed fish in Indian-administered Kashmir.

But Ganai’s business started falling apart about eight months ago, when his fish began to die.

Other farmers in the area were losing their fish, too, and no one knew why it was happening. To find out, the Sher-e-Kashmir University of Agricultural Sciences and Technology opened a fish hospital in May 2018. Since then, 300 trout farmers have had their fish diagnosed and treated for various fungal, bacterial and parasitical infections.

These problems first arose because atmospheric temperatures in the region have gone up, workers at the fish hospital say.

Lab workers at a fish hospital at Sher-e-Kashmir University of Agricultural Sciences and Technology in Rangil, a village north of Srinagar, a major city in Indian-administered Kashmir. Scientists say more fish in the area are dying because of bacterial infections caused by warming water.

Fish farmers and others who work in the industry worry that their jobs will disappear as temperatures rise, but the fish hospital’s staff say they’re developing treatments to keep that from happening.

Nearly half the fish and seafood the world consumes comes from farms. Fish farming in Indian-administered Kashmir is growing, with 513 trout farms now operating in the state of Jammu and Kashmir, according to the state’s Department of Fisheries.

Thousands of people make a living from freshwater fishing. Some cast their nets off the shores of Dal Lake, the second-largest lake in the state and home to around 17 different fish species.

Total fish production in the state was 20,700 metric tons in the 2017-18 fiscal year, according to the Department of Fisheries. That’s a small piece of India’s total fish production, but for landlocked Jammu and Kashmir, it’s a sizeable industry.

But water bodies in the state are getting warmer, says Khurshid Tariq, an assistant professor of zoology at Islamia College of Science and Commerce in Srinagar, a major city in Indian-administered Kashmir.

Across the board, the annual maximum temperature in the region is increasing at a rate higher than the annual minimum temperature, according to research published in January by Shakil Ahmad Romshoo of the University of Kashmir, as well as other researchers. 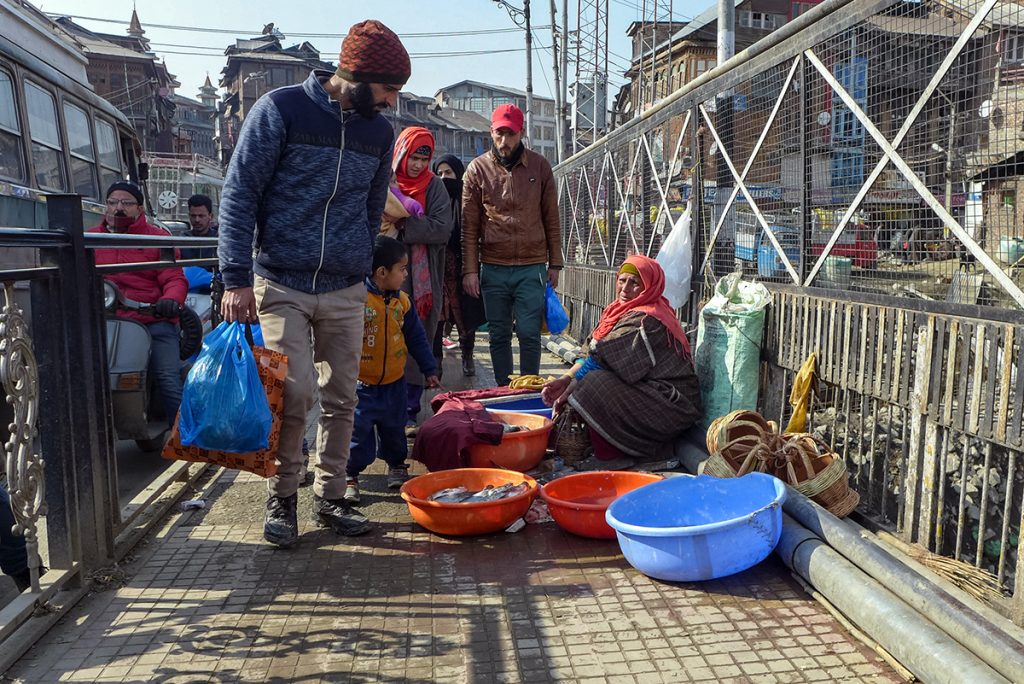 Women sell fish on the Amira Kadal Bridge in Srinagar. Fishing is a major industry in the region.

Cold-blooded fish, including trout, experience stress in warm waters, causing them to become vulnerable to bacteria, pathogens and water-borne parasites.

One of those parasites is Trypanosoma, according to Tariq’s research. Trypanosoma is most typically found in wildlife in regions of the world with a tropical climate. Now that temperatures in Kashmir’s water bodies are getting warmer, the parasite has found its way there, too.

Generally, parasites don’t kill fish, says Sumiyah Rasool, who works at the hospital and researches aquatic diseases. But they do weaken their hosts by destroying their tissues. That makes the fish vulnerable to secondary infections, she says.

Bacterial infections on the other hand, have the potential to kill their hosts within a week or two. Each year, fish farmers around the world lose 30 to 40% of their fish to disease outbreaks caused by bacteria, says Feroz A Shah, manager at the Division of Aquatic Animal Health Management. 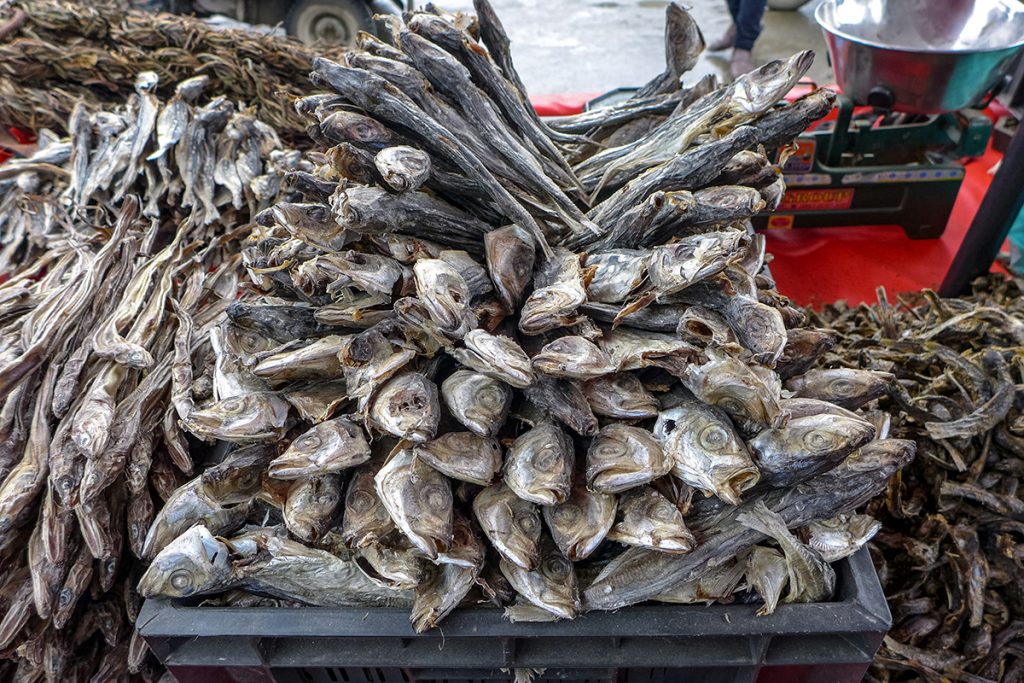 Dried fish are presented for sale in markets in the Batmaloo area in Srinagar.

Since May 2018, more than half of the state’s 513 trout farmers have reported fish deaths.

Those outbreaks happen for a variety of reasons, but they are most frequently associated with poor water quality and changes in atmospheric temperature, Shah says.

Many of the fish Rasool has treated were infected with Aeromonas hydrophila bacterium, which is commonly found in aquatic ecosystems, she says.

That includes Ganai’s fish. Before his fish died, Ganai noticed that they had developed lesions on their skin.

“I had no idea what was happening,” Ganai says. “I contacted the people from the [Division of] Aquatic Animal Health Management and they came here, took samples of the diseased fish.”

Hemorrhagic lesions on the skin, lethargy and abnormal swimming patterns are all signs of an Aeromonas hydrophila infection, Rasool says. 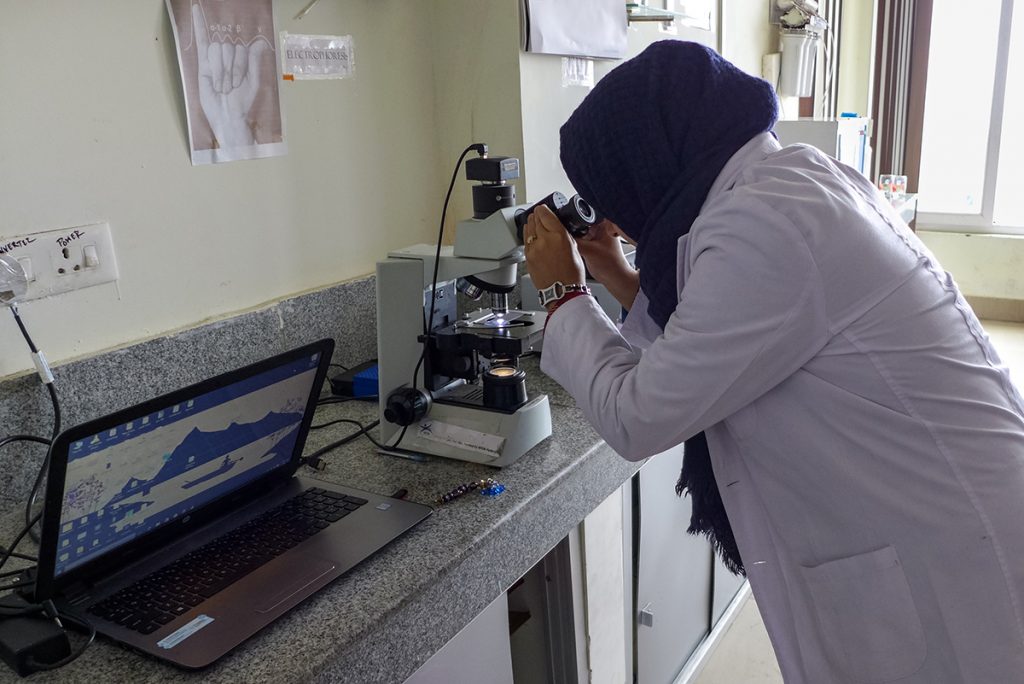 Sumiyah Rasool works at a fish hospital at Sher-e-Kashmir University of Agricultural Sciences and Technology, where fish with bacterial infections are treated.

Depending on the infection or disease fish have, Rasool prescribes either antibiotics or anti-fungal medications to the farmers. Both can be injected multiple times a week or mixed into the water at the farm, she says. Some farmers administer the treatment themselves. In other cases, hospital workers visit the farms to do it. The length of time for treatment also depends on the type of infection or disease, she adds.

The hospital’s services are free of charge, but farmers are responsible for covering the costs of the medicine, which ranges from 100 to 900 rupees ($1.45 to $13), Rasool says.

Ganai says doctors came to his farm to administer treatment. Thanks to that, his business is slowly going back to normal. Now, he’s earning up to 10,000 rupees ($145) a month.