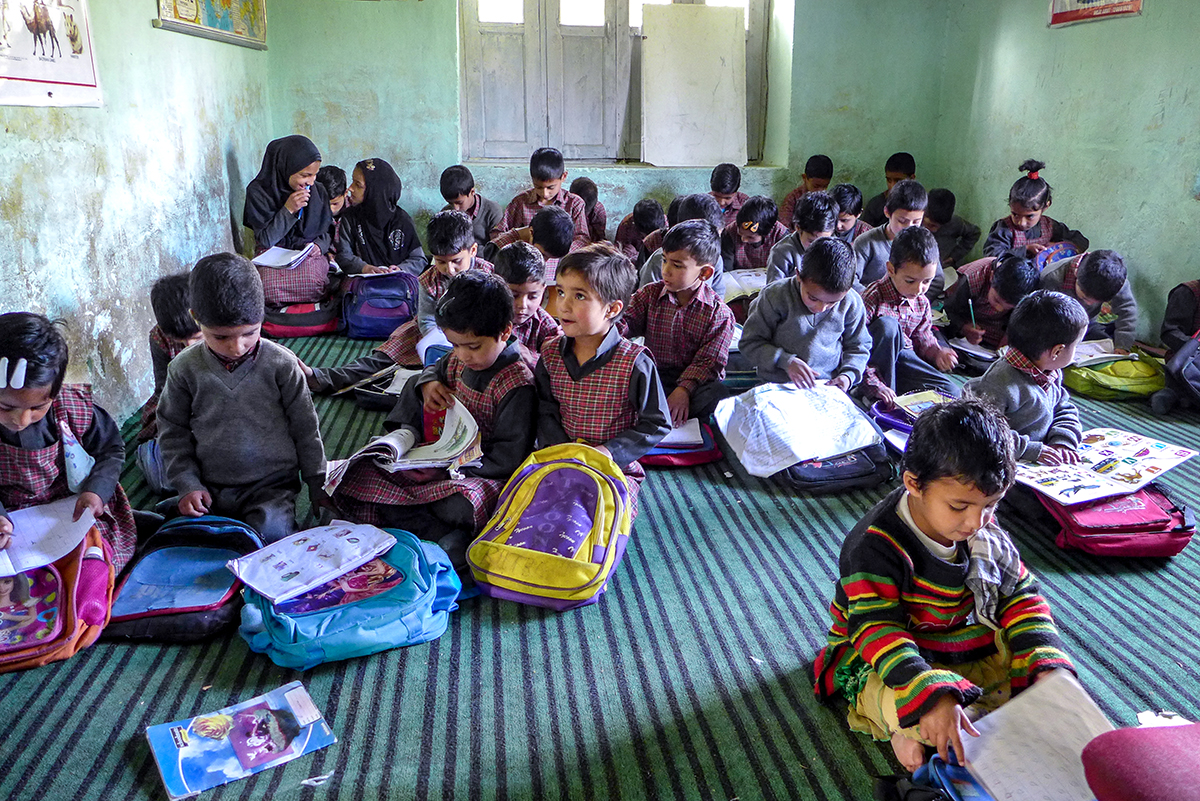 SRINAGAR, INDIAN-ADMINISTERED KASHMIR — It’s lunchtime and students at the Government Boys Middle School in this city’s Rainawari area eat their lunch outside, near the blacksmith shop and motorcycle repair garage that operate out of the building’s ground floor.

There is a graveyard where one might expect a school yard. The students, both boys and girls despite the school’s name, play near the road as traffic passes by.

A narrow staircase is the only access to the four-room school, three of which are classrooms that collectively hold eight classes. The fourth is reserved for the school’s six teachers.

“The children suffer as a result and are not able to understand what we teach due to the mix-up of the classes,” says Rubina Akhtar, a teacher in this school.

INSIDE THE STORY: After writing a story last year about a lack of electricity in hydropower-rich rural Kashmir, GPJ reporter Raihana Maqbool knew that she needed to write about public schools that lack electricity, too. She found that the schools often make do without toilets, furniture or even school buildings. Read the blog.

These challenges are common in public schools in Jammu and Kashmir, the political hotbed and contested zone at India’s northern tip. About half of the state’s 29,047 public schools do not have libraries, according to surveys conducted by the National University of Educational Planning and Administration, which used 2014-2015 data. More than 6,300 of the schools lacked toilets for girls and about 8,000 lacked toilets for boys in the 2014-2015 school year, according to government data. Thousands more schools had toilets listed as “dysfunctional.”

Just over 21,000 schools operate without electricity. About 2,600 are without water. Thirty-eight schools don’t have classrooms. Thirty-nine schools don’t even have buildings.

At the Rainawari school, students sit on the floor during class, says Javaid Iqbal Makhdoomi, a teacher. With more than one class in a single room, teachers and students strain to focus.

“We have [a group of] classes and when the teacher is teaching one class there, we have to listen to that as well. I get confused and we have listen to lectures of every class and I get tired,” says Danish Ahmad, a student in class five.

Ahmad says his parents can’t afford to send him to a private school, where he might enjoy a playground and learn to use a computer. 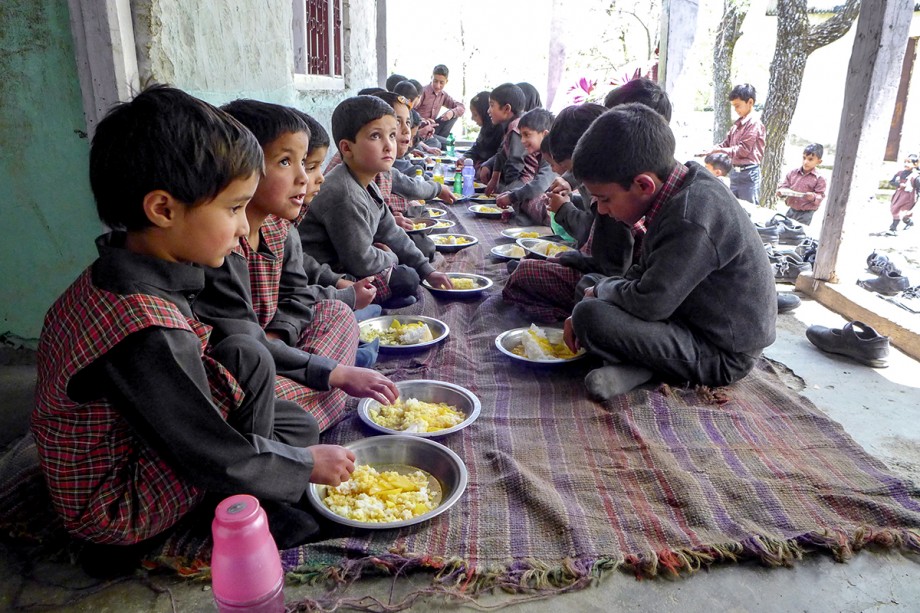 Students at the Government Boys Middle School in Srinagar eat lunch on the grounds of a nearby mosque. Their school lacks a dedicated play area and there’s a graveyard just outside its doors.

“A person has to guard the door if someone is inside,” she says. “This is also a reason for the dropout rates. Girls in particular are pushed out of the school due to the lack of sanitary and hygienic facilities.”

Officials at the state’s Directorate of School Education say efforts are being made to improve conditions at public schools, and that some projects are already taking place.

“The government has implemented many schemes for the education sector,” says Kumar Rajeev Ranjan, director of school education. “Toilets are being made in every school. We are trying to make separate bathrooms for boys and girls in every government-run school.”

“Yes, many schools are not in good condition but we are trying to reach out to the schools and improve them,” he adds.

Ranjan was not able to provide GPJ with any details on those projects, however, saying he was transferred to the education department only recently. He noted, however, that the education is free, as are the meals.

Teachers express dismay at the government’s response to the issues. Education officials should visit the schools and see the reality of their challenges, Akhtar says.

“These things matter a lot and a lot of improvement is required,” she says. 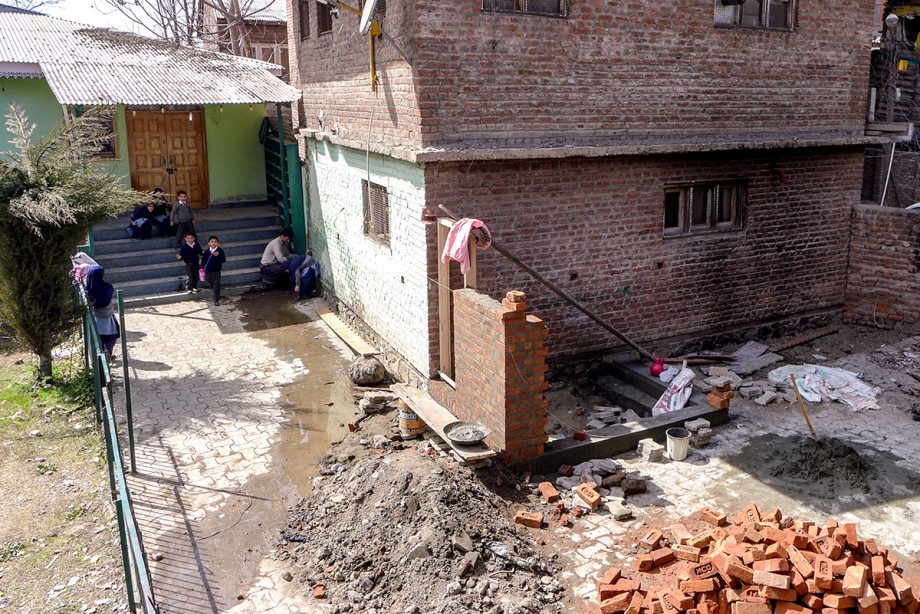 The Government Boys Middle School in the Rainawari area of Srinagar, a major city in Indian-administered Kashmir, sits above a blacksmith shop and motorcycle repair garage. The school lacks electricity and eight classes cram into three classrooms. 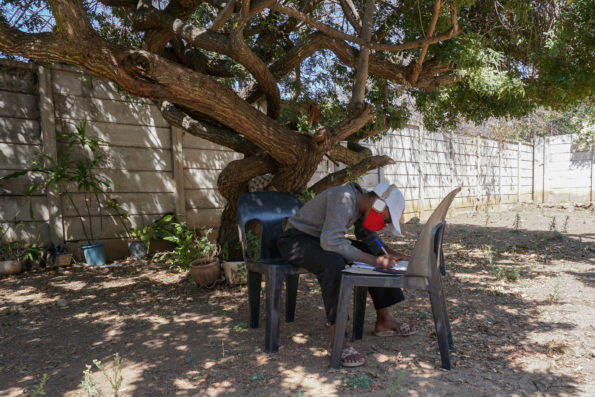 But Can They Dance to It? Math, Science Hit the Airwaves