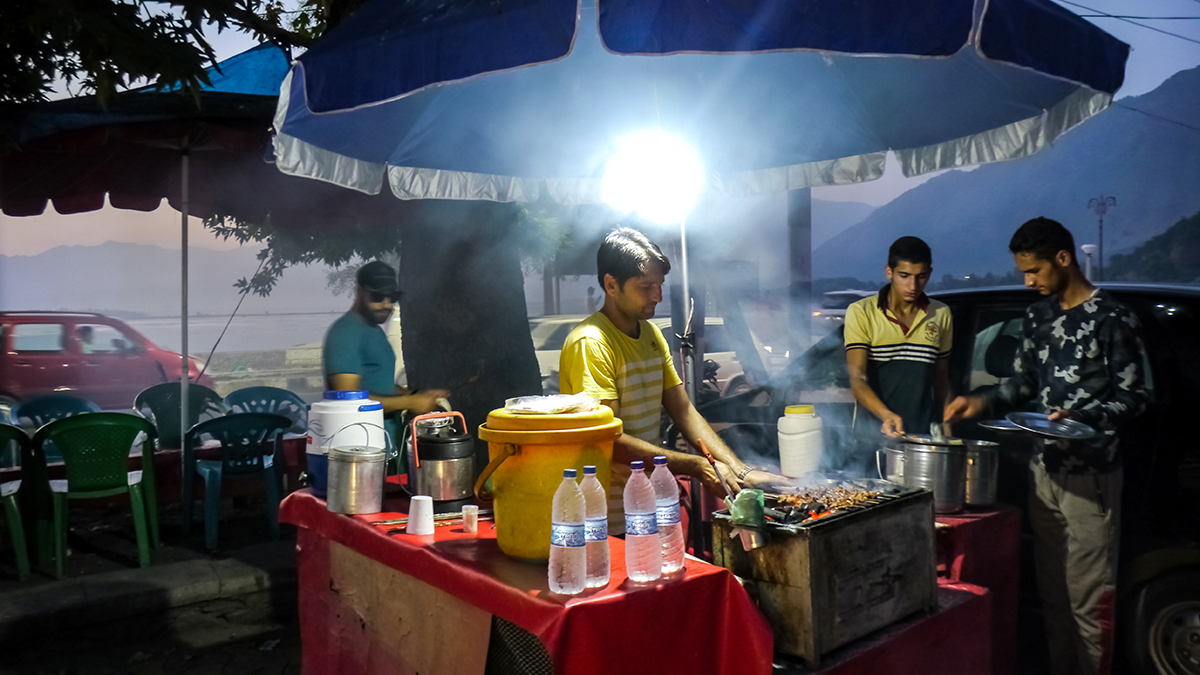 SRINAGAR, INDIAN-ADMINISTERED KASHMIR — Syed Arsheed, 34, loves to spend his Sundays eating corn and skewered barbecue meat in Makai Park, in Srinagar, the summer capital. Arsheed, who works at a bank, says he heads to the park to relax after a busy schedule at work.

“This place is lovely. One gets to eat the food and also enjoy the breeze of the Dal Lake,” he says. “I come here with my friends and sometimes with my family.”

Makai Park, also known as Makai Point, is a small park on the banks of Dal Lake, off Boulevard Road. The Tourism Department of Jammu and Kashmir opened the park in 2006. Before the official opening, many people sold roasted corn roadside, so the park was aptly named Makai, which means “corn” in Urdu.

Today, the park has many barbecue food stalls, which sell mutton and beef skewers, as well as roasted corn. Arsheed says he especially likes the park after the sun sets.

“It is so serene here during the evening hours, and the smell of the roasting barbecues attracts me more,” he says. “I love to eat the mutton barbecues. They are very tasty. The aromatic smell and the smoke is just lovely, and one can’t resist having a barbecue.” 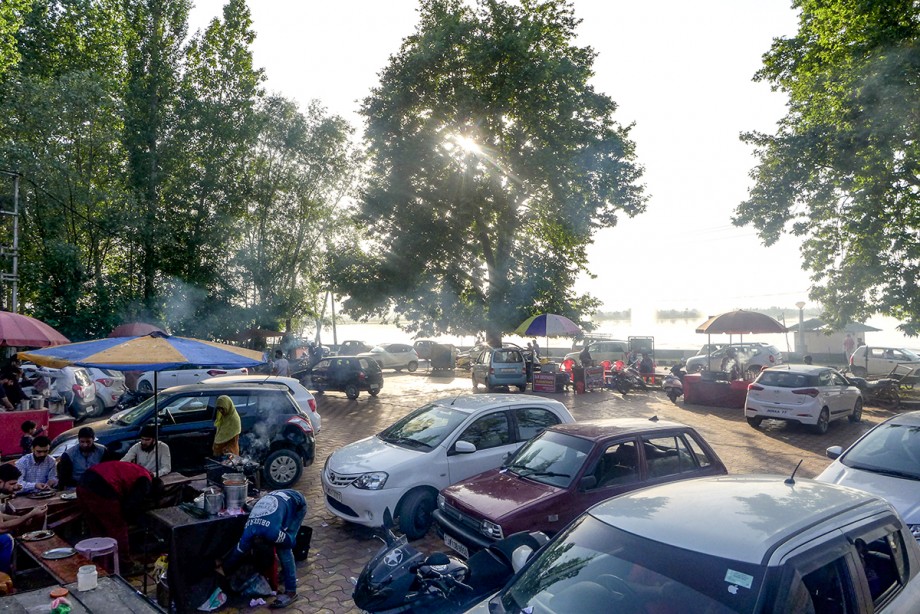 Visitors to Makai Park can enjoy a view of Dal Lake, while eating a number of treats from the park’s food stands.

Ghulam Ahmad Wagay owns one of these barbecue stalls. He set up his stall when the park was made in 2006, and, with the help of his son, he has been successfully running the business ever since.

When Wagay opened the stall, he wasn’t sure how the business venture would go, he says.

Today, Wagay says his customers come from all over the Kashmir Valley.

In his stall, Wagay sells mutton, beef and chicken barbecue skewers, a barbecue plate that includes two or three types of chutney (a saucy condiment typically made with fruit, vegetables and spices), and roti, a type of flatbread. 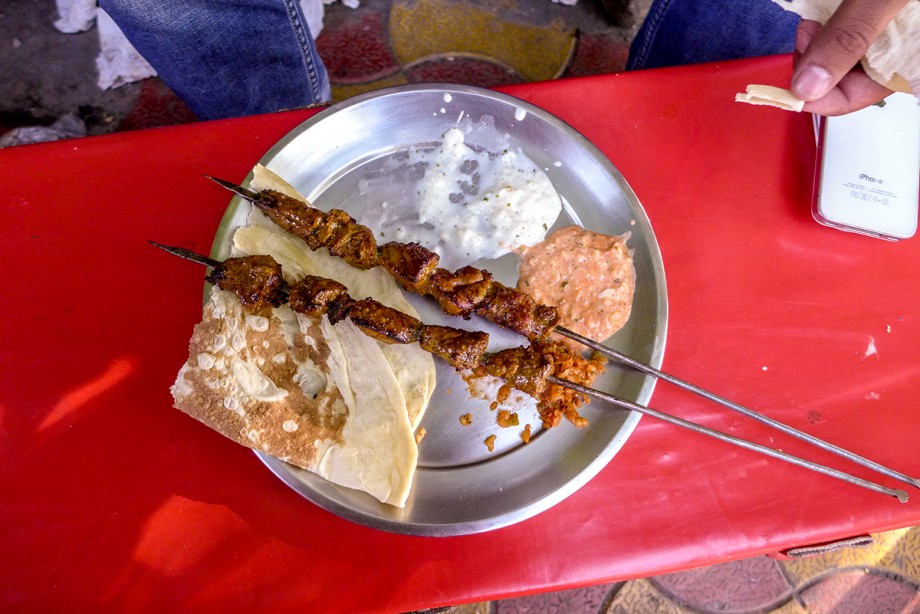 Arsheed is a regular customer at Wagay’s barbecue stall.

“They are the best ones here, and sometimes, when we are a number of friends, we bet on who will have the most number of barbecues,” Arsheed says, while eating a mutton skewer. “Last time I remember one of my friends had twenty mutton barbecues.”

As Wagay fans the barbecue coals, he says the location of the stall is a big plus for the business owners.

“People not only get to enjoy the various types of food but also enjoy the scenic beauty of the Dal Lake,” he says. “Also, Boulevard Road is very busy, and we have a huge rush of tourists from this road. Being on this point, the people stop their vehicles and come to eat here.” 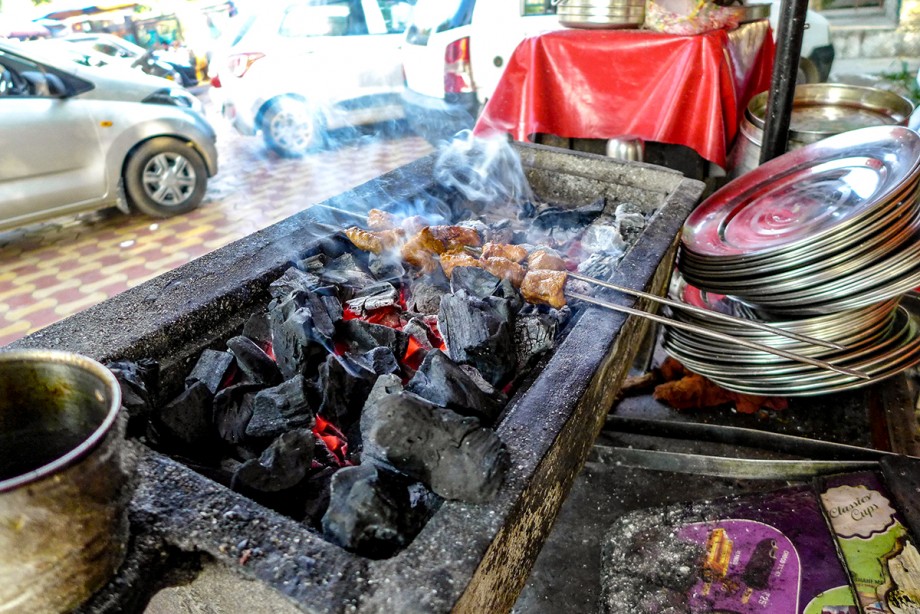 Ghulam Ahmad Wagay grills a barbecue skewer over hot coals. Wagay opened up his shop in 2006 and says business is especially busy in the evenings.

As he applies hot mutton fat onto the grilling meat with a brush, Wagay says that despite an increase in customers, the quality of his barbecue has remained the same since the business opened, keeping many devoted to his stall. Many of those customers, he says, have become his friends.

Wasiq Ahmad, 31, is another customer of Wagay’s. He is from the Nishat area of Srinagar, and he says this is his favorite place to enjoy barbecue food.

“I have become addicted to this place’s barbecues, and if I don’t visit and eat something here, I feel something is missing,” Ahmad says.

“I hope that the people keep loving our barbecues and continue coming here to enjoy it,” he says.

For Arsheed, it’s a combination of the barbecues and sitting on the banks of Dal Lake with his friends that will continue to make visits to Makai Park enjoyable.

“It is such a lovely place with cool breezes. I love to eat here and enjoy the sunset as well,” he says. 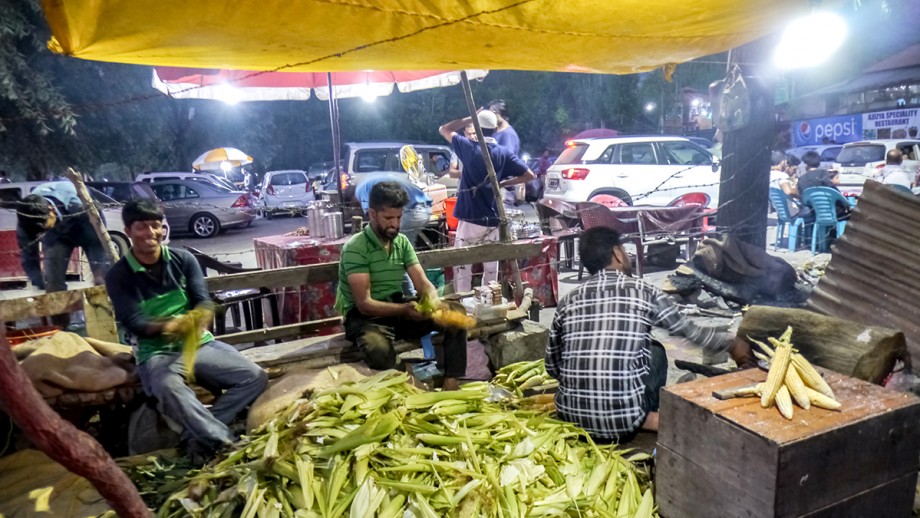 There’s an abundance of corn for sale in Makai Park. The corn is roasted and rubbed with lemon, chili powder and salt.

Visit Makai Park
Makai Park is located on Boulevard Road in Srinagar, Jammu and Kashmir. For more information about the park and Dal Lake, visit the Official Website of the Tourism Department of Jammu and Kashmir, http://www.jktourism.org/dal-lake