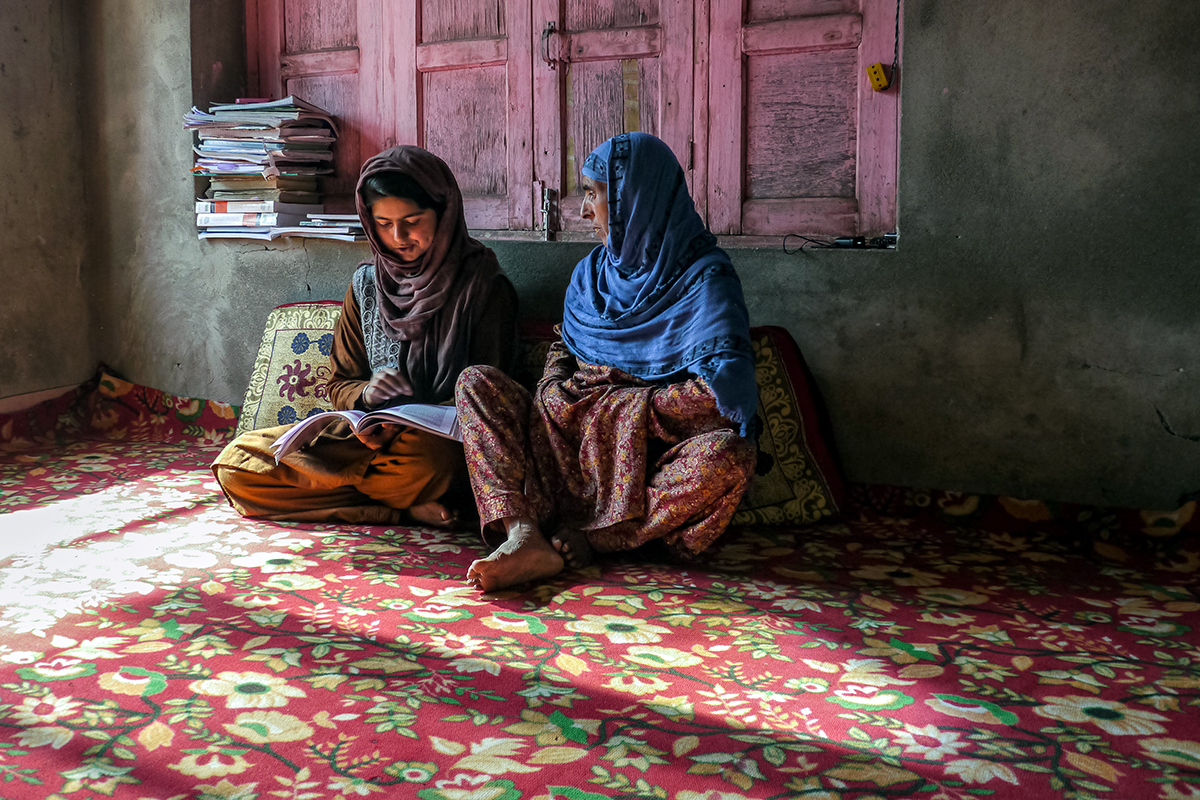 But today, she’s unable to concentrate – every time her phone rings, she gets distracted.

She avoids the calls, leaves her book on the cement floor of her room and heads for the kitchen, one of the three rooms of her house in Ahan, a village in north Kashmir. There, she helps her mother prepare dinner.

Her phone rings again. This time, Rehman asks her mother to answer the phone and tell the caller she’s not home.

“It is so frustrating to get these frequent reminder calls asking to clear the pending tuition fees,” Rehman says. “I don’t have even a penny.” 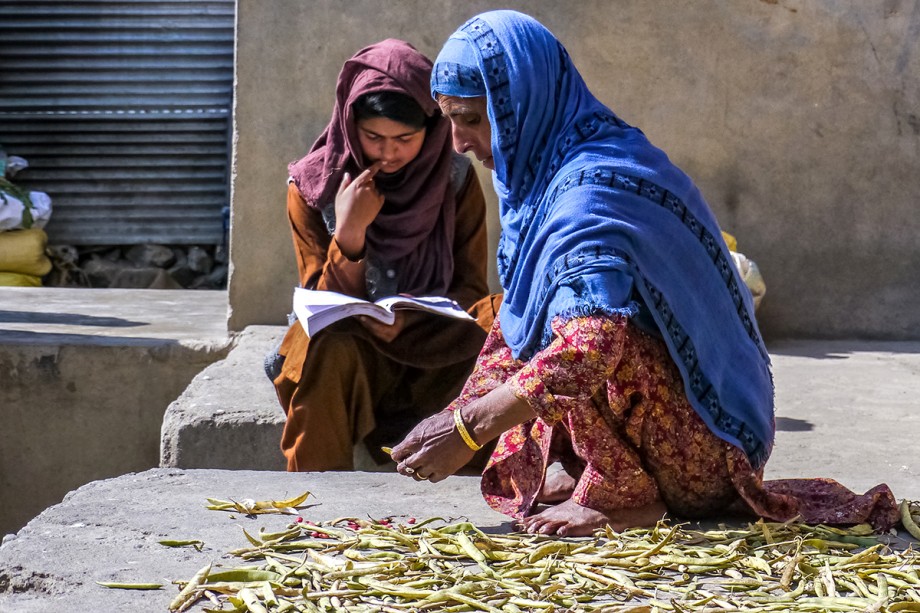 Shazia Rehman (center) hopes that she will be able to continue attending school, even though she no longer receives financial assistance from the local nonprofit Jammu & Kashmir Yateem Trust.

Jammu & Kashmir Yateem Trust, a local nonprofit, which had helped Rehman and her sister pay school fees since 2013, stopped its charitable services to the sisters in 2016, she says. Rehman’s sister dropped out of school two years ago, when paying for tuition on her own became impossible.

Rehman’s mother, a widow, has borrowed money from relatives to pay for Rehman’s education. However, without financial assistance from the nonprofit, Rehman may have to leave school, as her older sister did.

In December 2016, India’s Ministry of Home Affairs barred more than 20,000 local nongovernmental organizations from receiving foreign funding. Among them was Jammu & Kashmir Yateem Trust. Officials say that some of the organizations didn’t file their annual returns, and others were using the foreign funds for purposes other than intended. But local experts say the government move was a political decision with a goal to weed out organizations with interests that didn’t align with that of the government.

With funding from abroad no longer welcome, those who were relying on civil society organizations for support have been left to fend for themselves. In the region of Indian-administered Kashmir, one organization, Women Empowerment Trust, is still supporting locals with help from a network of philanthropists in the area.

According to the Charities Aid Foundation of America, India has close to 3 million nonprofits, but only a small percentage can legally receive foreign funding. In 1976, nearly three decades after British rule in India had ended and violence had erupted in the area that is now Indian-administered of Kashmir, the Foreign Contributions Regulation Act was passed, to control which organizations could receive money and what it could be used for.

Since then, funding relationships between local civil society organizations and international donors have grown more and more complex, with the government often alleging that local organizations fail to file annual returns. Conflict in the region has intensified, too, especially at the Line of Control that divides Jammu and Kashmir, a state administered by India, from land administered by Pakistan.

It is so frustrating to get these frequent reminder calls asking to clear the pending tuition fees. I don’t have even a penny.Shazia Rehman

Women and children have been hit the hardest. The conflict is responsible for leaving some 79,000 children without parents, according to a 2016 report by the Kashmir Foundation for Organization Research and Development.

Rifat Arif, special secretary of the Social Welfare Department of Jammu and Kashmir, says the Ministry of Home Affairs only decided to ban foreign funding for certain NGOs after careful scrutiny. Many of the people who were benefiting from the work of these organizations are eligible to receive support from the state.

“Our department has various financial assistance programs and schemes meant for the poor, as well as militancy-hit victims,” says Arif, who is also in charge of the Council for Rehabilitation of Widows, Orphans, Handicapped & Old Persons, a unit of the Social Welfare Department.

But with no signs of the territorial dispute between Pakistan and India coming to an end, local human rights workers say they’ve stepped in to help families across the region.

“Kashmir has been the worst hit by the ban, due to the ongoing conflict – unlike the rest of India,” says Zahoor Ahmad Tak, a patron of Jammu & Kashmir Yateem Trust.

His organization’s mission is to provide financial assistance and rehabilitation services to widows and to help young children get an education. The foreign funding restrictions have affected more than 50 percent of the work they do, he says. While the organization continues to provide financial assistance to 12 orphanages in Jammu and Kashmir, it no longer provides education stipends to students in the area. Four years ago, a total of 345 orphans and children affected by unrest in the region were each receiving 1,500 rupees ($21) each month to help them cover their educational expenses, Tak says. Rehman was one of them.

“We are not able to face our beneficiaries,” Tak says.

The only charitable donations that Tak’s organization and others receive are from locals during Ramadan, the ninth month of the Islamic calendar and a time set aside for fasting, prayer and charitable giving. But the donations are still not enough to help as many people as the trust was helping before, he says.

“We have offered help to many young and uneducated youth in entrepreneurship opportunities, with the help of many international NGOs,” says A. R. Hanjura, who runs Islamic Relief and Research Trust (IRRT), a local nonprofit.

Prior to the government ban in 2016, IRRT was receiving money from the international nonprofit Mercy Corps to help 200 young men start businesses of their own, Hanjura says. His organization had also signed a memorandum with Mercy Corps and the state’s Agriculture Production Department to provide financial support to 500 local potato farmers. But that project could not take off because of the government’s ban on foreign funding for thousands of local nonprofits, including IRRT, he says.

While the limitations on foreign money have stopped many NGOs based in Indian-administered Kashmir from carrying out humanitarian work and left them wondering when they’ll be able to get back to it, Hanifa Nasim, a social worker and founder of Women Empowerment Trust, is pooling money from a close circle of friends and relatives to help those in need.

Currently, 10 people are giving to the organization, Nasim says.

In 2014, when flooding displaced more than 1 million people in Jammu and Kashmir, the organization provided food and clothing to more than 100 people affected by the natural disaster, Nasim says. But the 4-year-old organization was set up to support women and children affected by conflict.

Shameema Akhter, who sustained injuries to her spine in 2016 during a fresh wave of violence, says the Women Empowerment Trust covered her medical treatment expenses, including 4,000 rupees ($56) worth of injections.

Neither “the government nor any NGO helped me with anything,” she says. “But the trust helped me with medicines and gave me assurance that they will help in all possible ways.”

Even though Akhter’s injuries mean she can’t have children, the 25-year-old says that the help she’s received from the Women Empowerment Trust gives her hope that she will soon become self-sufficient.