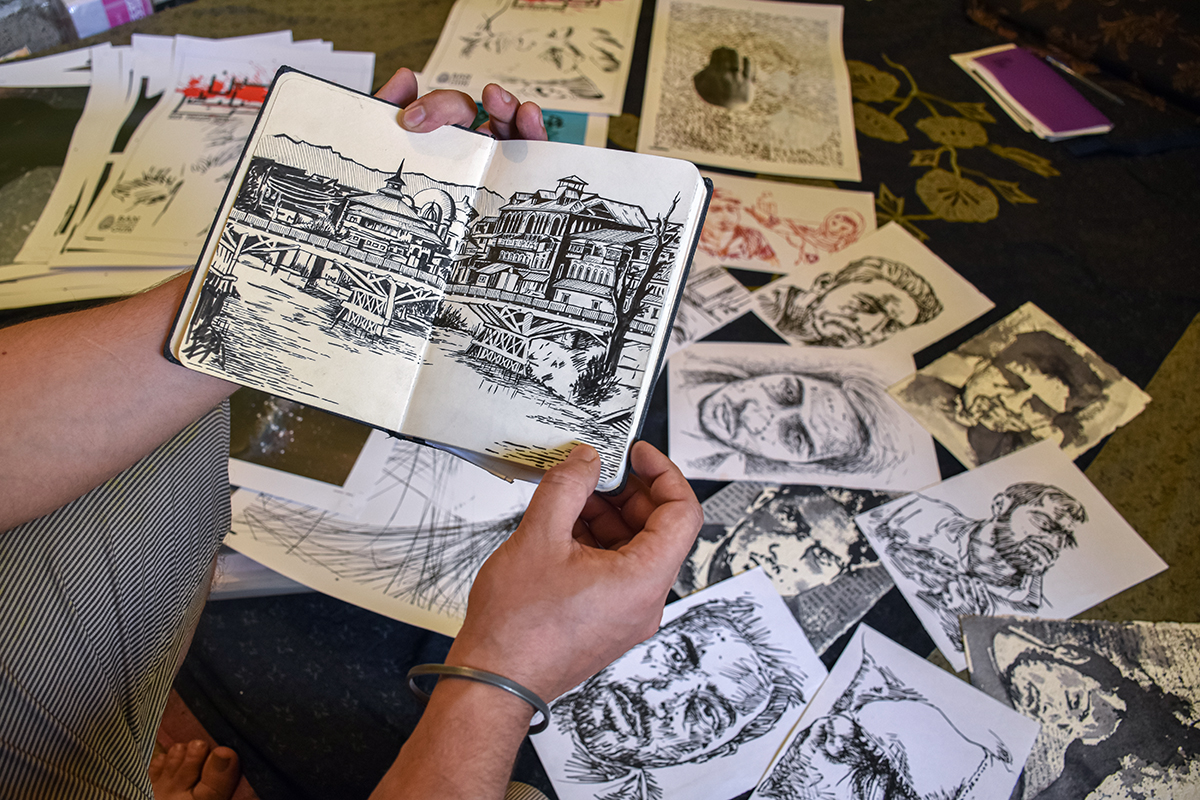 His own artwork haunts him at night. The subjects he illustrates on canvas stare into his eyes.

Bhat is Kashmiri. His art portrays people who suffer in the conflict in his home region of Indian-administered Kashmir.

In Indian-administered Kashmir, many local people fight bitterly against Indian forces who seek to quell protests. And the conflict isn’t easing.

“When you belong to the place where you were born and where your family still lives, your work cannot escape the realities of home,” he says.

Bhat says the art he creates in New Delhi, India’s capital city, is a conceptual mapping of the experiences of people affected by the violence and trauma that occurs every day in the Kashmir Valley. Much of the conflict is centered there.

“Every project that I have been doing is a work in progress,” says Bhat. “It is never complete. It shows characters in my work consistently living their lives despite all the difficulties.”

His goal, he says, is to ensure that the people he depicts are not forgotten. 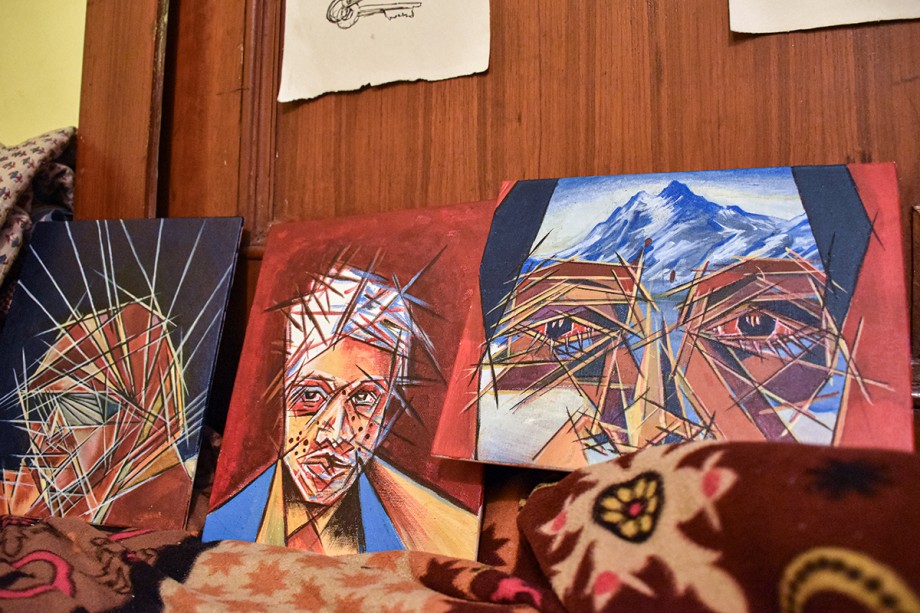 Bhat displays his work in his apartment in New Delhi. The subjects of his pieces are people who were injured by pellet guns fired by Indian security forces.

Bhat left Indian-administered Kashmir in 2016 to pursue a master’s degree in fine arts at Jamia Millia Islamia, a federal university in New Delhi.

But there are risks involved for Kashmiri artists who create and show their work outside their home region. Bhat displayed his work at an exhibition in March, along with other Kashmiri artists. His exhibit, titled “Ban Pellets in Kashmir,” referenced pellet guns often used by Indian forces to push back protesting crowds.

In February, more than 40 members of India’s Central Reserve Police Force were killed in a suicide bombing near Srinagar, the summer capital of Indian-administered Kashmir. The bombing sparked widespread threats against Kashmiris throughout India. Even members of the Indian government painted Kashmiris as terrorists on social media and on television.

The art show was scheduled to occur during that period of heightened tension.

“At first, I was scared whether to participate or not since the environment had been quite volatile for Kashmiris living in New Delhi,” Bhat says. “But then I thought it was a very important moment to draw attention of people beyond the story of people killed and show the daily trauma that Kashmiris every day face.”

It’s common for artists to address their own experiences, says Kaushal Kumar, Associate Professor at the Department of Painting at Jamia Millia Islamia.

“The tools that they use in expressing their ideas come naturally from the place where they mostly identify with, which is their home,” he says. “Art cannot be separated from the realities that a person lives in or experiences for so long.” 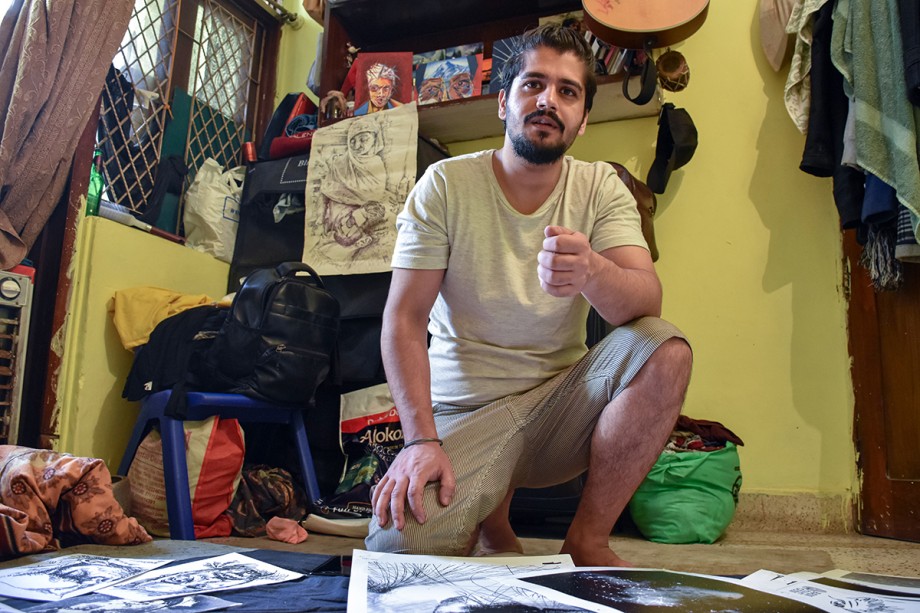 Bhat says he’s worked on art about people wounded by pellet guns used by Indian security forces for three years. The subjects of his artwork told him that they’ve been harassed because they’ve spoken out against the use of pellet guns. “I have tried to make their faces unrecognizable up to a certain extent by distorting their faces to keep their anonymity,” he says.

But for some artists, that inclination poses a problem.

“I think in the present times, one has to be very mindful of his actions and expressions,” he says.

Kumar is worried for his students who express activism through their art.

“I don’t want their expressions [to] land them in any trouble,” he says. “I keep on telling my students to manage their voice sensibly and creatively.”

Anis Wani, a political cartoonist who is based in Indian-administered Kashmir, says it’s “fearful and disturbing” to display work outside of that region.

“There are people who support and encourage your efforts, but simultaneously there is a large section of society who may not like your truth and can go up to the extent of harming you,” Wani says.

Kashmiri artists say fear is a well-worn feeling for them.

“I come from a place where we are always made to fear our identity, history, realities, and unfortunately we cannot question things,” says Salman Baba, a Kashmiri artist who has lived in New Delhi for five years. 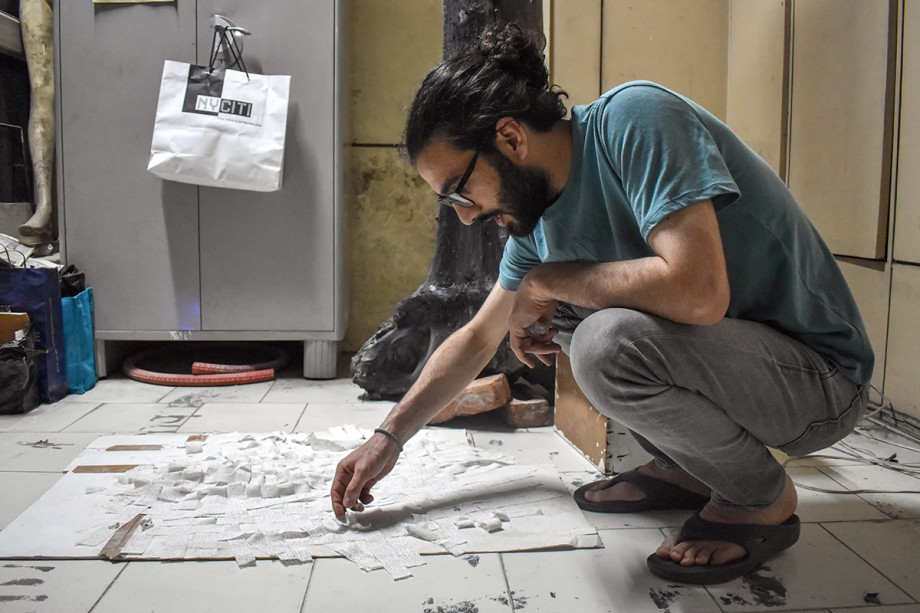 Salman Baba, an artist from Indian-administered Kashmir, shows his artwork in his New Delhi apartment. “Throughout my work, I try to question the mainstream narratives on any issue that I am highlighting, so that people can decide and interpret things critically without compromising on the authenticity and truth of the event,” he says.

Baba once showcased an art performance during which he wore a white shroud. The words “missing” and “imprisonment” were sewn on it in Kashmiri-style embroidery.

“The idea was to convey how normal it is for a person in Kashmir to live with such realities and identities,” Baba says.

Bhat says he’s had to hide his identity to protect himself. Still, leaving art behind isn’t an option.

“I think there is a need to channelize the emotion into more constructive work and become responsible in representing the reality as critically as possible,” he says.