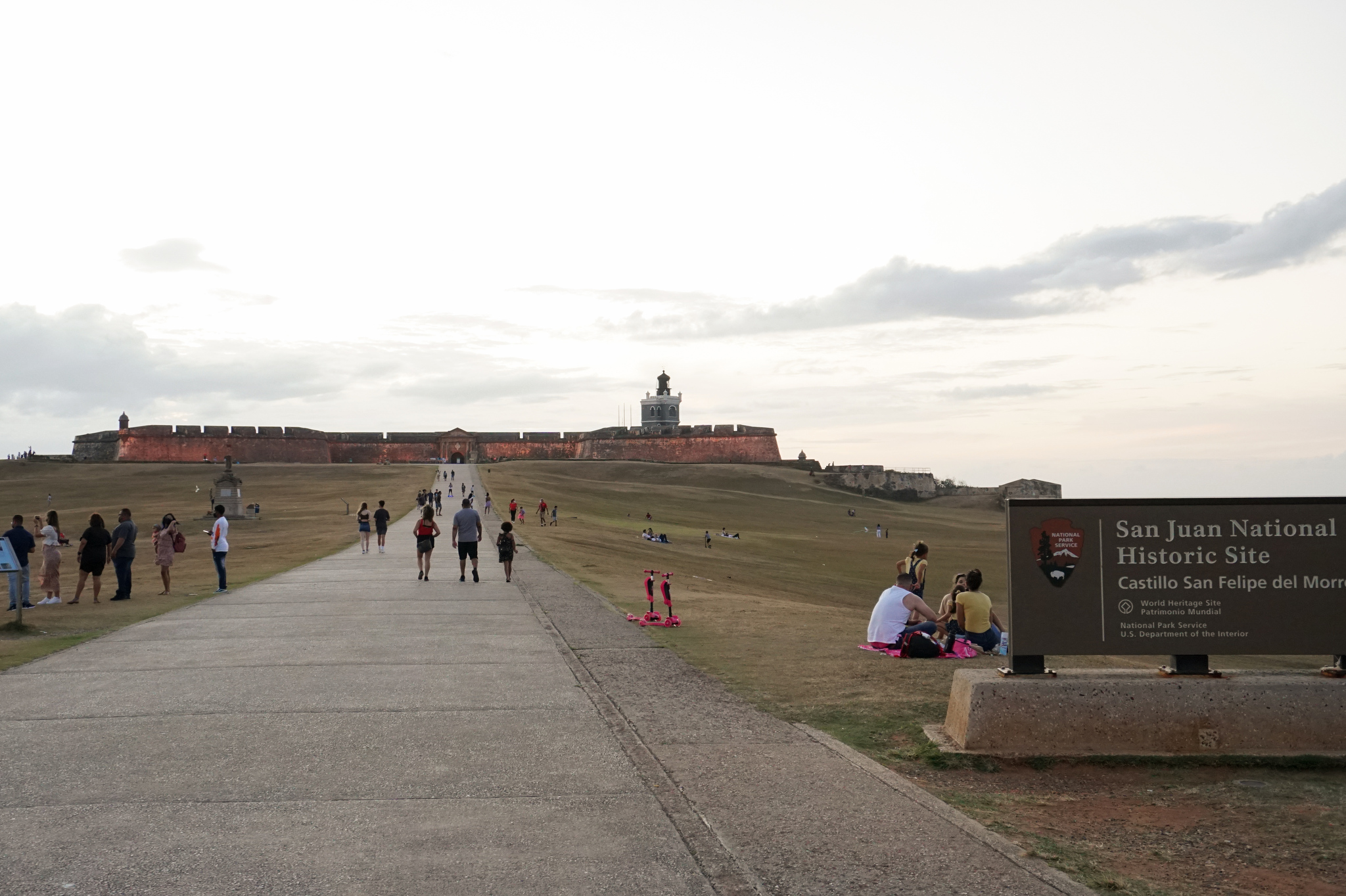 Francisco Ramos, José Rodríguez and Cristina Vega, residents of Guayama, a town in southern Puerto Rico, visit the area at least twice a month, wearing face masks to shield themselves from the coronavirus.

“I have seen that most [tourists] are not following the protocols,” she says, referring to the government’s coronavirus restrictions.

They agree that the government was right to impose the measures as cases of COVID-19 – the disease caused by the coronavirus – shot up earlier this year. “But I also encourage tourism because it is important and necessary for the economy of Puerto Rico,” Rodríguez counters.

The visitors symbolize both the hopes and fears of Puerto Rico’s critical tourism industry, which has rebounded with the advent of vaccinations and a spate of coronavirus directives. Yet even as business owners are thrilled to see visitors again, they fear that the volatile nature of the coronavirus will stifle tourism’s newfound momentum.

The nascent recovery is good news for a sector that contributes nearly 8% of the gross domestic product to the local economy and generates about 80,000 jobs per year. 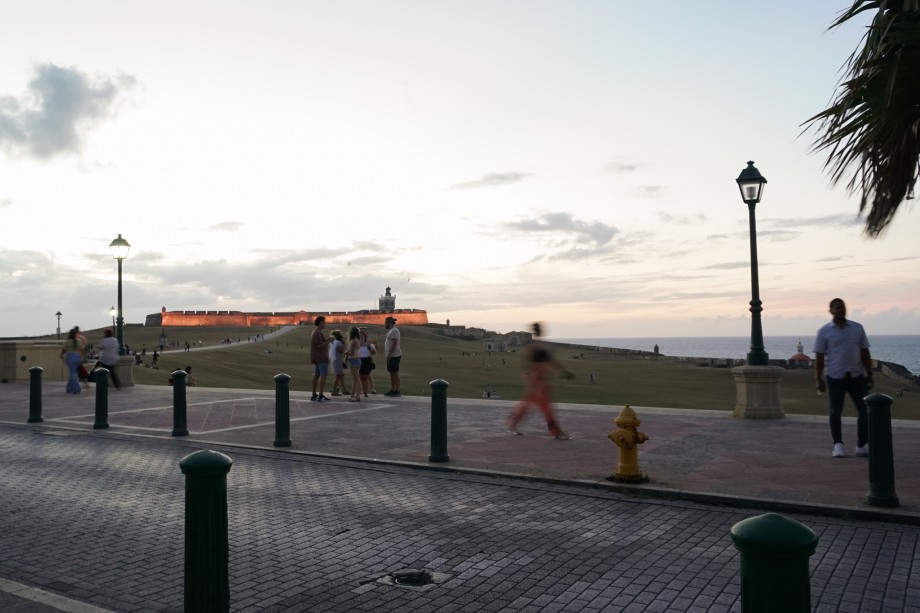 “It is very difficult to find a related industry in Puerto Rico that is not affected by the rise and fall of tourism,” says Joaquín Bolívar III, chairman of the Puerto Rico Hotel and Tourism Association.

Hotels have remained open throughout the pandemic, but occupancy rates for the region’s roughly 15,000 rooms bottomed out at 2% last year, and more than 80% of hotel jobs were lost, Bolívar says.

The Puerto Rico Planning Board estimates that tourism took a $27 billion hit in 2020.

Its recovery pleases and challenges those who rely on the industry.

The rebound comes after a year of on-again, off-again coronavirus restrictions that included a 9 p.m. to 5 a.m. curfew, stay-at-home orders for Sundays, limited access to beaches, closures of movie theaters and eateries, and one-client-at-a-time service at beauty salons.

In January, the government eased strictures on beaches, casinos, movie theaters, hotels and restaurants, which enticed more people to go out and enjoy them.

In January, 264,780 people arrived in San Juan via the Luis Muñoz Marín International Airport, according to the government-owned Puerto Rico Tourism Company. In March, that figure vaulted to 382,023. 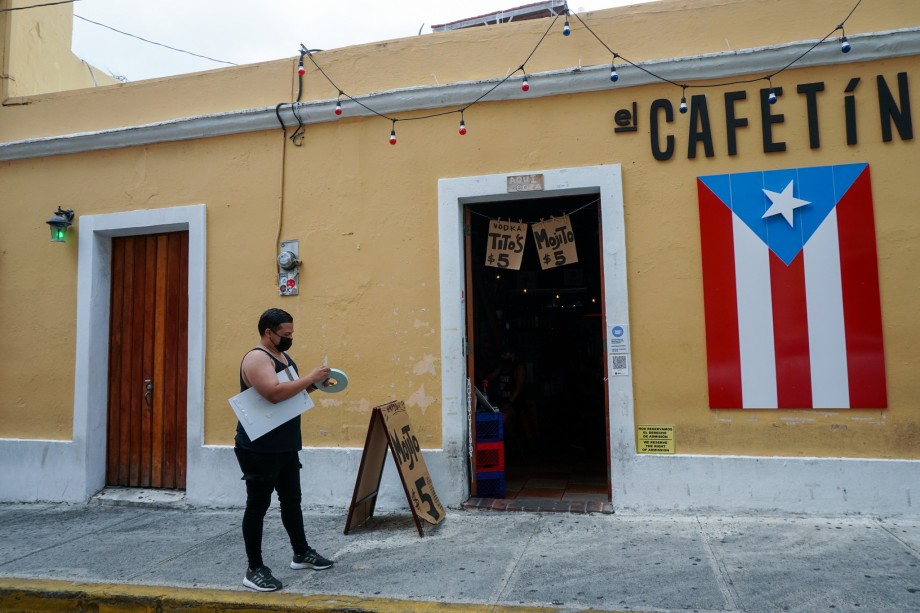 Joed Rivera, co-owner of a bar and restaurant in Old San Juan, puts up signs as he prepares for guests. He initially worried that the directives would halt tourism.

Tourists poured into places such as Joed Rivera’s bar and tapas restaurant. Customers started to return around Christmas, he says, then the numbers slid in January and February, only to tick up again in March.

But Rivera, normally cheerful and energetic, was nervous: As three coronavirus variants spread in the region, cases swooped upward again, drawing concern from the Centers for Disease Control and Prevention.

Puerto Rico’s governor, Pedro Pierluisi, announced follow-up vaccinations for people over the age of 16 in response to an outbreak that occurred after thousands of people flocked to the region for spring break at the end of March and early April. He later approved vaccinations for minors as young as 12.

In March, the government limited business hours and the number of customers. Restaurants, for example, had to trim their schedules and could serve only at 50% capacity.

Today the government has loosened many restrictions. Those who are vaccinated aren’t required to wear masks in public, although they’re still mandatory in closed areas such as restaurants. Visitors still need proof of vaccination or a negative COVID-19 test, but restaurants can now operate at 75% capacity.

This means Rivera’s eatery, with a capacity of 60, can host 45 people. The largest flow of customers arrives in the evenings, which forces some guests to line up outside, a common sight at Old San Juan restaurants these days. Sometimes, to keep diners from crowding too closely in front of the restaurant, Rivera shuts the doors. 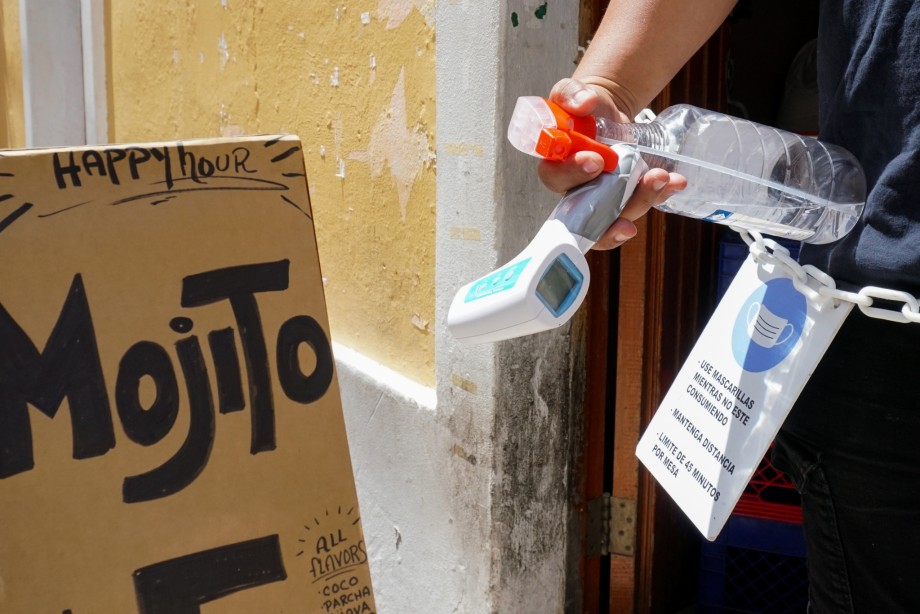 Joed Rivera disinfects his restaurant before customers arrive. When too many diners crowd outside, he shuts the doors.

Throughout Old San Juan, most restaurants and other businesses make patrons wear face masks, wash their hands and use sanitizer. Out in the streets, though, many people – both locals and tourists – go without face masks.

The recovery hasn’t reached everyone.

Tomasina Cruz Infante, a merchant in Old San Juan for three decades, sells water, chiringas (kites), piña coladas and other miscellaneous items. Her profits have gradually grown in recent months, but she says they are “well below” half of her pre-pandemic earnings.

Though her business is outdoors, when customers arrive without a face mask, she gives them one.

“Everyone must take care of themselves because the government can’t chase people down,” she says. “You need to be responsible for yourself.”