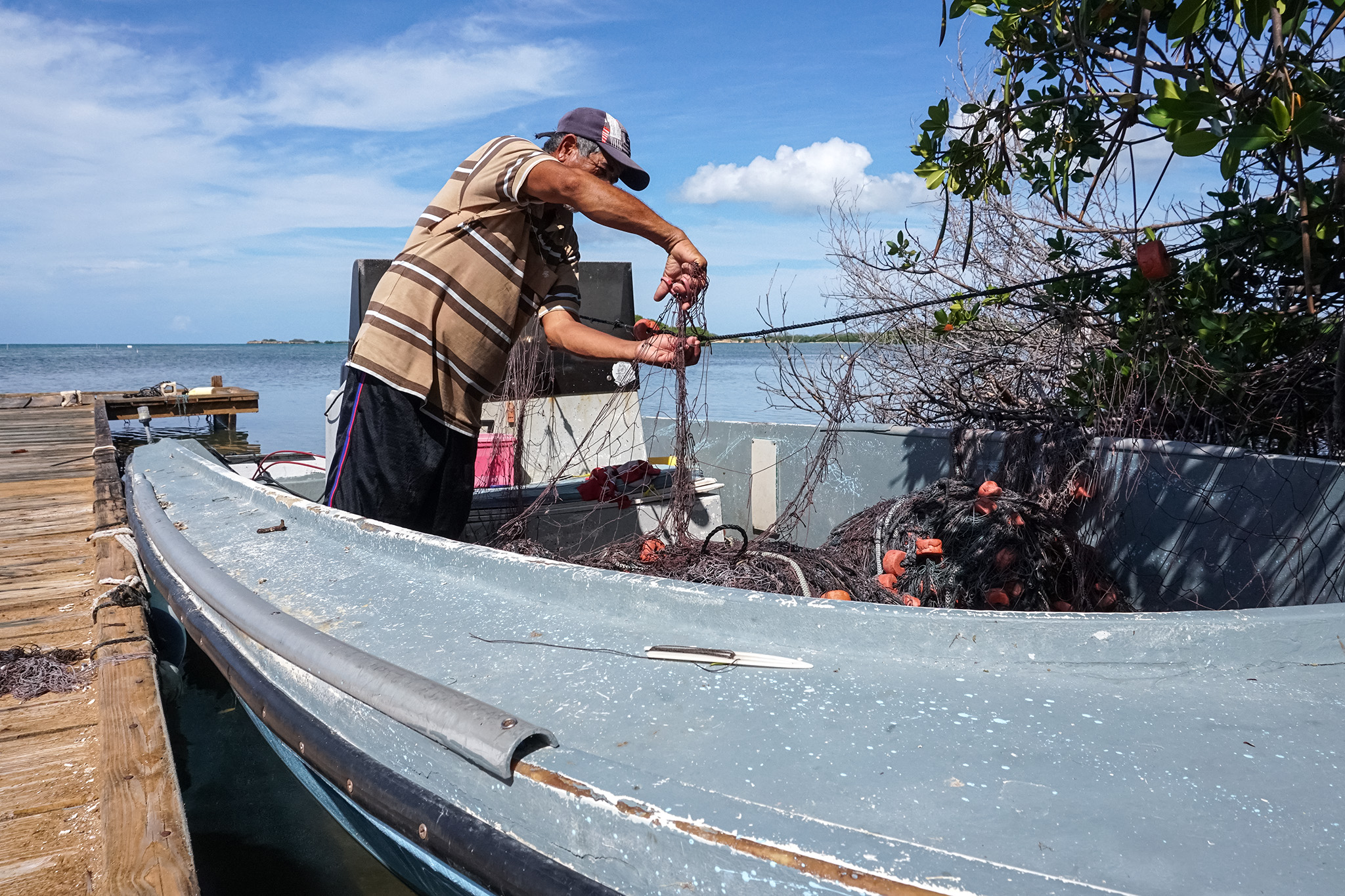 CABO ROJO, PUERTO RICO — Abdiel Vélez stands with perfect balance as his boat dips and sways in the sea. He casts his wide net in a graceful arc, careful to avoid the coral reefs. Then he waits.

Such scenes are disappearing along with artisanal fishermen like Vélez, who fear the erosion of a craft passed down for generations.

Increasing ocean surface temperatures and storms around Puerto Rico are killing off fish and threatening the income of hundreds of fishermen – especially those who practice traditional techniques.

“There aren’t any young fishermen now,” says Vélez, 36, who learned the trade from his father.

Local fishermen use ancestral methods, such as the mallorquín – three panels of netting tied to a line of buoys – or the nasa, a cylindrical chicken-wire or wooden trap with a funnel submerged in the water. But fewer fish mean they must venture into deeper waters, making it difficult to keep up the craft. 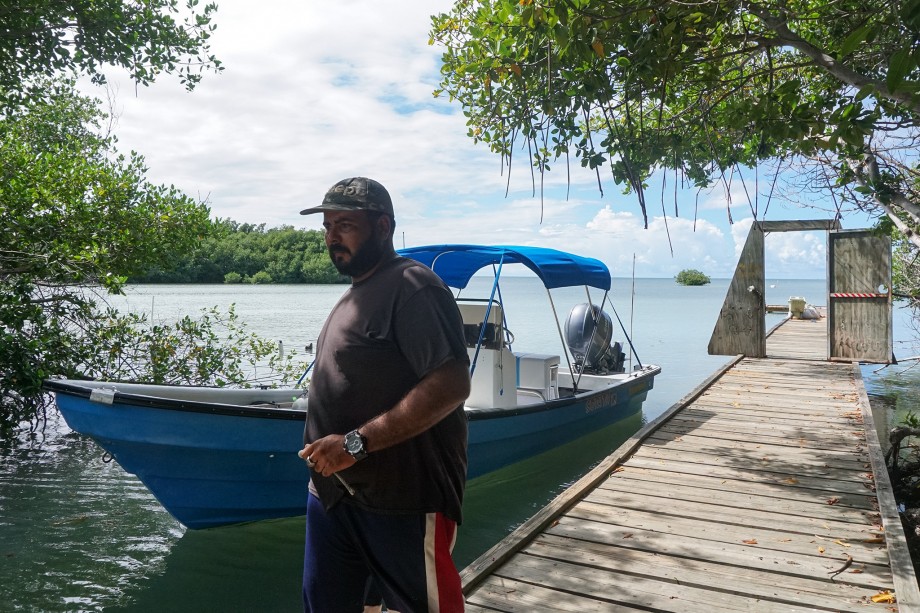 The coronavirus has worsened the economic situation for traditional fishermen, including Abdiel Vélez, who struggle with reduced sales.

Puerto Rican fishermen brought in 1.75 million pounds of fish in 2017, about a quarter less than two years earlier, according to a 2018 report by Puerto Rico’s Department of Natural and Environmental Resources.

The industry continues to suffer. Commercial fishing activity in mid-2018 hovered at 66% of the levels before Hurricane Maria, one of the worst natural disasters to hit the region. The storm, which pummeled Puerto Rico and Dominica in September 2017, killed thousands, destroyed the power grid, ruined communication networks and triggered over 40,000 landslides.

The coronavirus has only increased the challenges of traditional fishermen, amid restaurant closures and intermittent curfews.

Vélez earns up to $80 a day, although the pandemic has cut his income. He used to fish every day, but has cut back to once or twice a week because he struggles to sell his catch. A few years ago, he says, 25 pounds of string cost $265. Now it costs nearly $100 more.

His livelihood is unlikely to get easier. The National Oceanic and Atmospheric Administration predicts the number of powerful hurricanes, rainfall rates and storm-surge heights will increase – and they’ll threaten not just a way of life but the environment itself. Surface temperatures in the ocean surrounding Puerto Rico have increased by just over 1 degree Fahrenheit since 2000, according to the administration.

Fishermen saw the changes firsthand after Hurricane Maria, Vélez and other fishermen say, because the bottom of the sea was “turned upside down” and marine plants were covered in sand. Many species died.

Coral reefs, the prime hunting ground for artisanal fishermen, are especially susceptible. Rising ocean temperatures affect the reefs, says René Esteves Amador, marine extension director of the University of Puerto Rico’s Sea Grant College Program, and then so-called bleaching occurs. The increased temperatures stress the coral and cause it to expel a microscopic algae called zooxanthellae. This causes the coral to turn white and makes it more vulnerable.

Fishermen also face logistical challenges. They’re limited to the waters administered by the Puerto Rico Department of Natural and Environmental Resources, which extend about 10 miles from the low-tide mark. Anything beyond this area is controlled by the United States government. 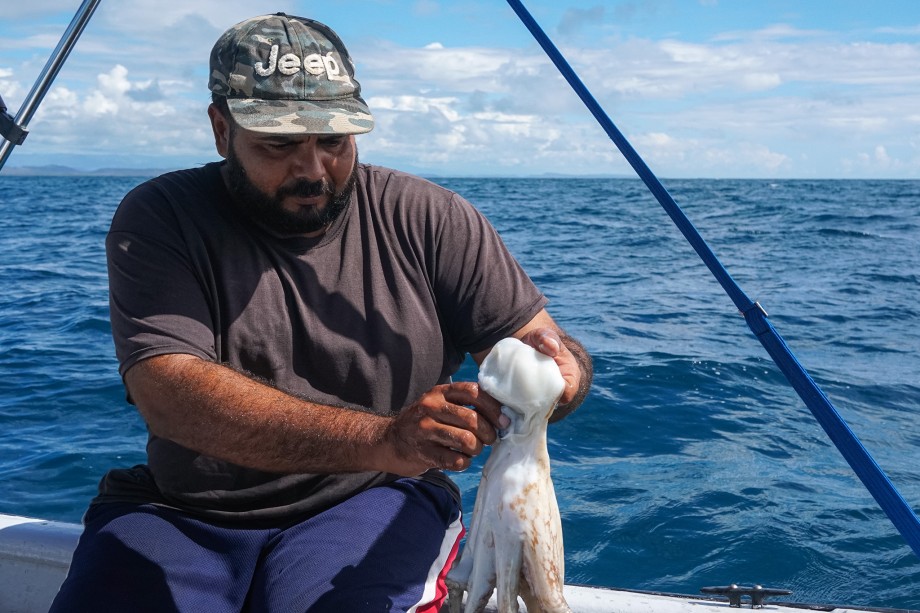 Some 4 miles out to sea, Abdiel Vélez cleans his catch.

U.S. commercial fishing fleets hunt the Atlantic for tuna, marlin and swordfish. That means these fish never arrive on the Puerto Rican coast, says Jannette Ramos García, a marine advisor with the University of Puerto Rico’s Sea Grant College Program, which operates with federal funds from the oceanic administration.

“The permits to extract fish from [the open ocean] are awarded by the federal government … and none of the individuals who have these permits are from here,” Esteves Amador says.

Some artisanal fishermen have given up and embraced dive fishing. It costs less and involves an easier training process, Ramos García says. Artisanal fishermen need specific tools, and people tend to learn the skills when they’re children.

For the craft to survive, more young people need to see themselves as entrepreneurs, says Daniel Matos Caraballo, biologist and head researcher at the Department of Natural and Environmental Resources’ Fisheries Research Laboratory. Right now, he says, the average age of artisanal fishermen is about 48.

Vélez is young for the profession. He throws his mallorquín carefully from the boat to avoid damaging both the reefs and the net. Making a mallorquín from scratch can take nearly a week. Vélez uses a 600-foot-long net, which can cost between $700 and $800.

He repairs the net himself, weaving it the way his father taught him. He doesn’t know if he’ll find another young recruit to offer the same lesson.

This article, originally published on March 1, 2020, was updated to reflect the economic impact of the coronavirus.