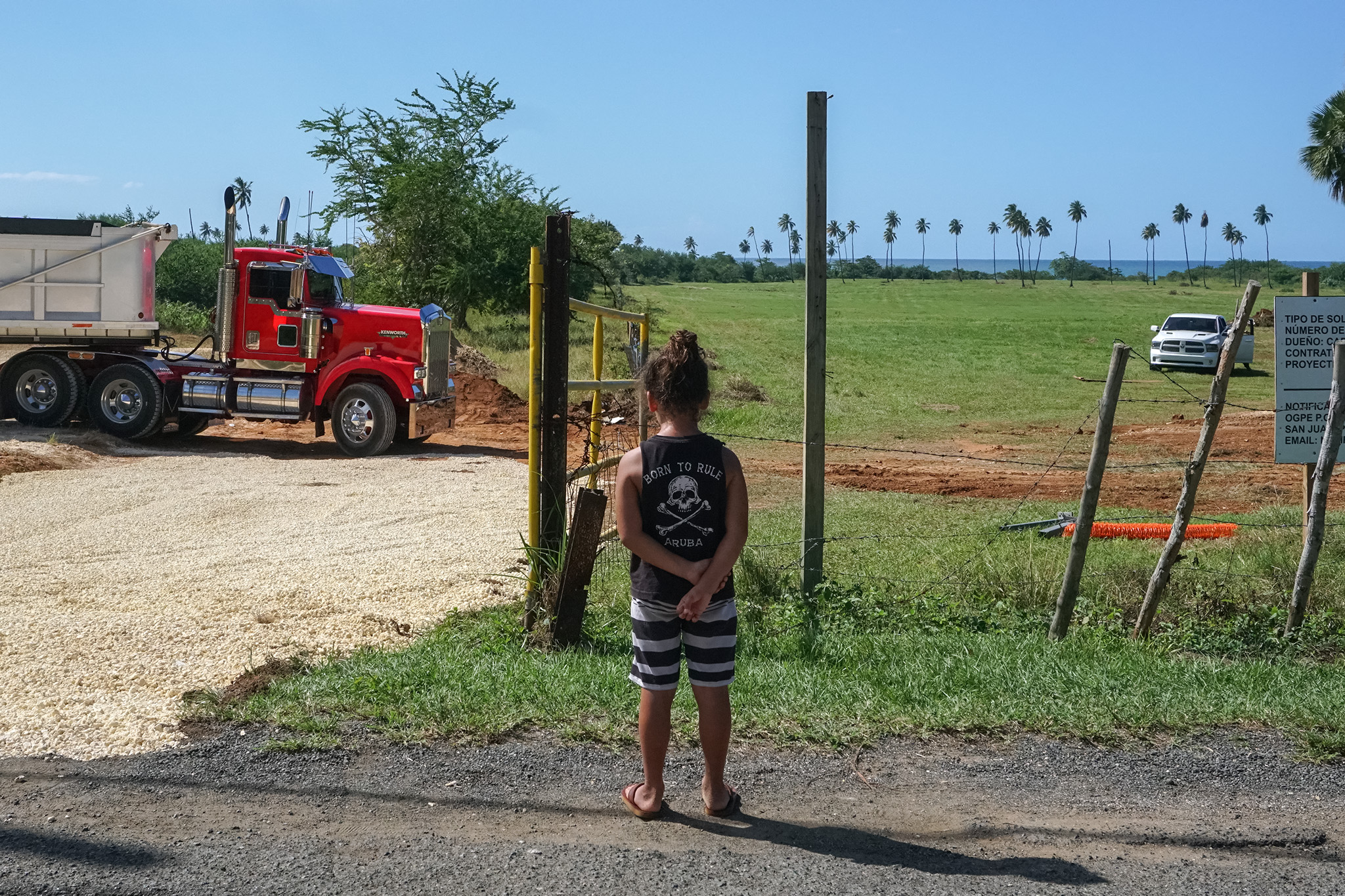 AGUADILLA, PUERTO RICO — After years of community uproar and legal battles, developers are pushing forward with construction of a tourist resort in one of Puerto Rico’s most important ecological areas.

The Caribbean Management Group plans to build the complex along the palm tree-lined coastal stretch of Playuela, on the northwestern tip of Puerto Rico. The family who runs the company recently received approval to proceed, after struggling to begin construction for the past four years. While the developers argue a need for economic growth, some residents fear environmental degradation and the irreparable consequences of unmitigated development.

Rare species of trees and shrubs grow in this municipality of Aguadilla, including the ceiba tree, the Puerto Rican hat palm and the bejuco de toro, a climbing tree with thick, vine-like branches that weave among other trees. The region is home to amphibians such as the coquí (a small frog species native to Puerto Rico), reptiles and a slender cuckoo bird called the bobo mayor. The area has also gained fame for turtle sightings, according to one of the few studies on the region, conducted in 2017 by Miguel Figuerola, a master’s student at the University of Puerto Rico’s Department of Marine Sciences.

Researchers recently found the dogwoodleaf plant species – previously thought extinct – in the region, along with 11 federally protected marine species and other threatened fauna and flora, according to a 2019 ecological study conducted by Save Playuela, a community initiative dedicated to the region’s preservation. 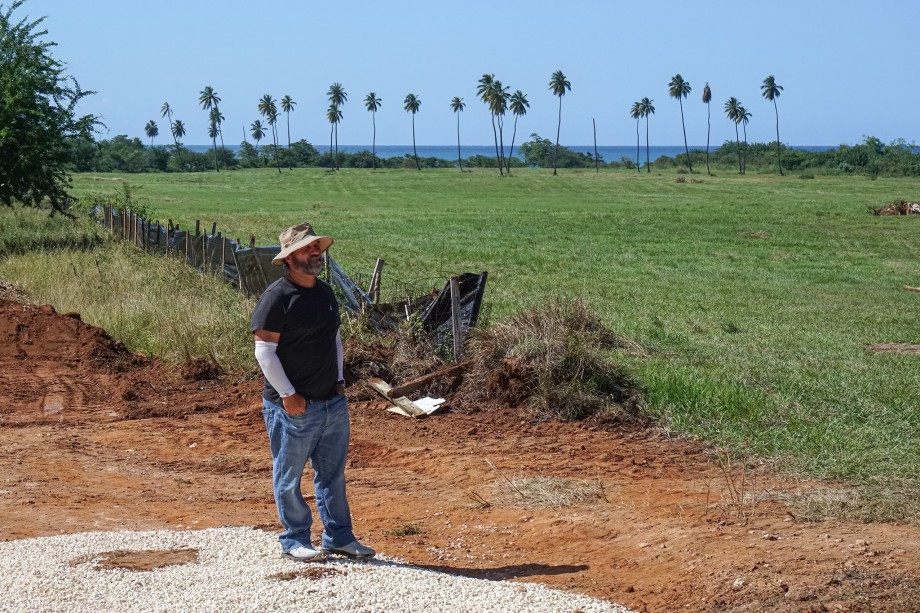 Héctor Vincenty, vice president of marketing at Caribbean Management Group, points out the ongoing construction. Workers lay gravel over flattened land along the entrance to the planned resort.

The Caribbean Management Group’s original plan was to build a hotel and vacation rental homes as part of the project, known as the Christopher Columbus Landing Resort. The plan outlines the construction of 100 independent villas with 200 parking spaces, plus condominiums, short term rentals, a casino, a convention center, two restaurants, a spa, a gym, a kid’s activity room, administrative offices and loading areas, as well as 1,067 parking spaces spread across four floors.

Reynaldo Vincenty, president of the development company, vows to limit construction to a 300-room hotel and 100 villas.

“I’m not going to build the 500 homes or the three hotels that have been approved, because I want the tourists that come to be able to see all this,” he says, pointing at the coastal landscape, with its flat light-green plains and tall palm trees.

Residents of Playuela are split.

Epifanio Álvarez, a longtime local, says the project will bring more activity to the area, so people won’t have to leave Puerto Rico for employment, as his son and grandsons had to do.

“Having work nearby, they could live closer to us,” he says.

Yanira González, on the other hand, has lived in the area for two years and says she opposes the project because of its environmental impact. She also worries the resort will mean limited public access to parts of the coastal area.

The controversy surrounding the project dates back to 1994, when Koeninger Development proposed it to the Puerto Rico Planning Board. Court rulings held it back. In 2006, Vincenty bought the land for the project, which included what Koeninger had originally attempted to develop. 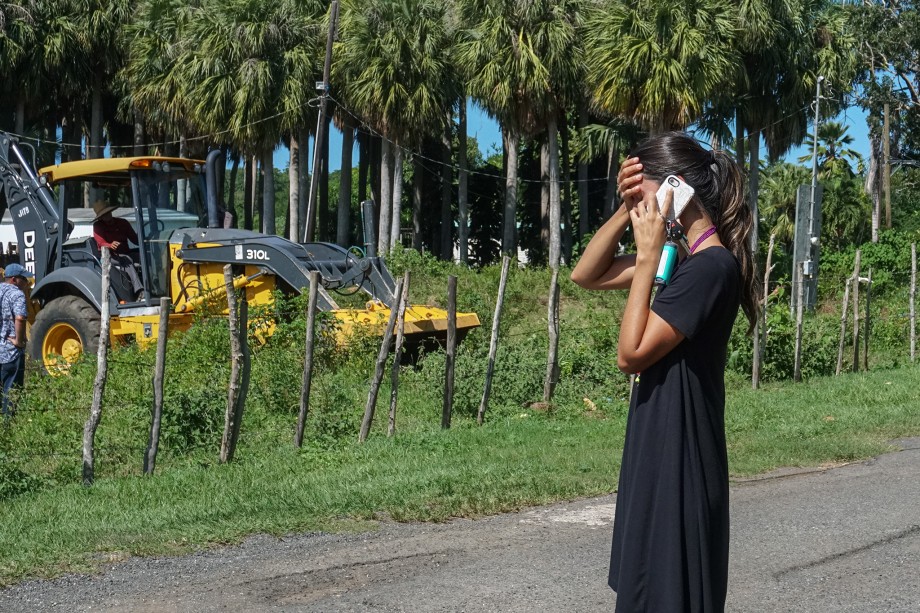 Suzette Quirós, a leader of Save Playuela, stands at the planned entrance to the Christopher Columbus Landing Resort.

The Puerto Rican Northwest Ecological League requested Vincenty stop his construction in November 2019, and an appellate court ruled in its favor. Vincenty’s company submitted a motion to clarify the decision, and the court ended up overturning the halt. Construction could begin.

Opponents refuse to back down. “Show me the permits!” says Suzette Quirós, a teacher and leader of the Save Playuela initiative. She claims it lacks the required permits to continue, an accusation Vincenty refutes. Requests to view them have been “under inspection” from the Permit Management Office since last year.

For Quirós, the project is negligent. The project’s environmental impact statement, completed in 1998, needs updating, she says, and does not account for new species.

“It would be an environmental crime towards all of the biodiversity,” she says. Her organization, along with independent specialists, created a list of 550 species that inhabit the area, including 12 endemic species and eight in danger of extinction. Many of those don’t appear in the project’s environmental impact statement, she says.

Vincenty contends he bought the land with all the necessary building approvals and will integrate the hotel into the natural environment. Residents will benefit from better electrical and sewage systems built for the resort, he says, along with a wider access road and well-paid jobs. He didn’t specify the number of jobs or the pay rates.

“The construction is going to go ahead, and there will always be protests,” Vincenty says. “I am very aware that nobody is satisfied with everything in life.”

Coraly Cruz Mejías is a Global Press Journal reporter based in Puerto Rico.