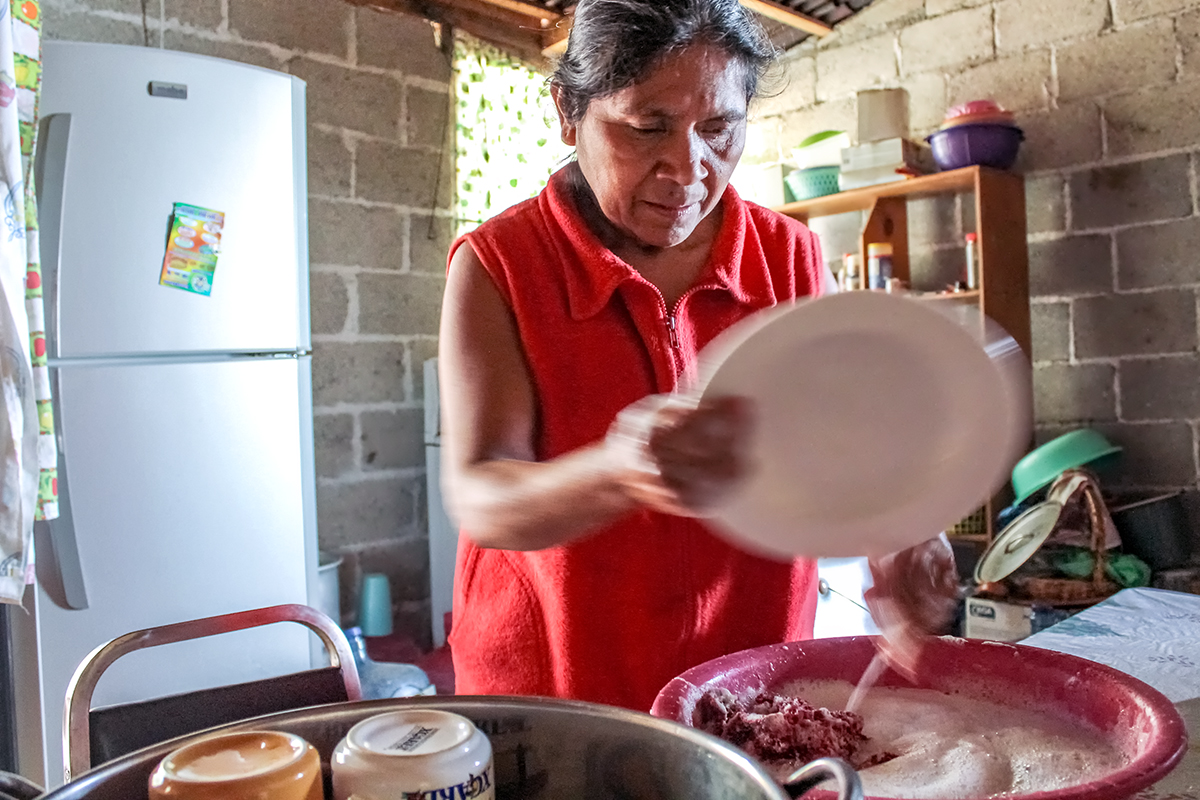 MEXICO CITY, MEXICO — The rain is a godsend for Silvia Santiago. She sets her buckets and tubs outside, and they fill up, relieving her of the need to fetch water from a neighbor’s well.

Santiago’s house, a single-story cement structure topped with a sheet of cardboard, clings to the side of a hill in Mexico City. The urban center is home to some of the world’s richest people and is the capital of Mexico, Latin America’s second-largest economy.

The house lacks running water. It’s a widespread problem here, where even public-school buildings sometimes have dry taps. Nearly a million people in the city of nearly 9 million live without working plumbing. (The city’s metropolitan area has more than double that population.)

The government has tried to fix the problem, but so far, proper management of basic water services has proven difficult.

Santiago’s situation is particularly dire, because there’s little chance that it will change. Her home is in an illegal settlement that cropped up without permission from local officials. What’s more, the neighborhood is on conservation land – protected, ironically, to ensure that a key aquifer, which supplies 60 to 70 percent of the city’s water, is filled. 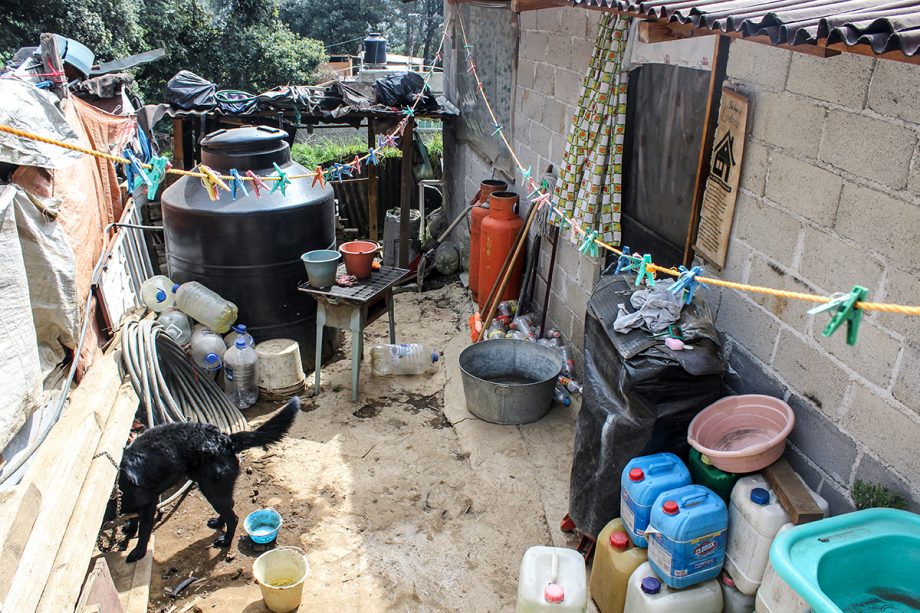 Silvia Santiago, 49, stores buckets, bottles and jerry cans on her patio and uses them to collect water when it rains. Santiago lives in an illegal settlement on conservation land in Mexico City, so there's no public water service. There are more than 860 illegal settlements in the city, each its own community with small shops, informal roads and growing populations.

And while the law protects conservation land, which covers more than half of the city’s land, housing rights advocates criticize the government for not providing water services to the people who live there illegally.

“This type of population can’t be abandoned,” says María Silvia Emanuelli, coordinator of the Latin American office of the Habitat International Coalition.

The United Nations recognizes access to clean drinking water and sanitation as a human right. In guidelines issued in 2002, the U.N. states that no one should be denied access to water based on housing or land status. Even informal settlements should have access to “properly maintained water facilities,” those guidelines note.

The lack of water in Mexico City’s illegal settlements is so severe that Léo Heller, the U.N.’s special rapporteur on the human rights to safe drinking water and sanitation, visited the city in May 2017 and acknowledged the problem. In a report published in August of that year, he noted that the government should eliminate restrictions related to water services and sanitation in those places.

But he didn’t mention the issue of settlements that exist on conservation land.

Similarly, the Mexican constitution was amended in 2012 to affirm that access to water is a human right, but that amendment didn’t make any reference to illegal settlements.

This type of population can’t be abandoned.María Silvia Emanuelli, coordinator of the Latin American office of the Habitat International Coalition

More than half – 59 percent – of the city’s 366,157 acres are formally preserved conservation areas, and there are 867 illegal settlements on that land, comprising nearly 7,000 acres. Housing prices have skyrocketed in recent years, and the city’s zoning laws, which prioritize protected natural areas, don’t offer many options for people who aren’t wealthy. (Read more of our coverage on illegal settlements in Mexico City here.)

But it’s not just illegal settlements where people can’t get the water they need. In fact, almost one-third of all homes in the country do not receive daily running water, according to the Instituto Nacional de Estadística y Geografía (INEGI), the national statistics agency.

Also, 21 percent of the 206,155 public schools in Mexico get their water from wells or tankers instead of taps, while 6,489 schools do not have access to water, according to the final report by Heller.

That data differs from the government’s estimates, which state that 55,626 of the nearly 180,000 public schools in the country don’t have access to running water.

Emanuelli says a lack of infrastructure in illegal settlements shouldn’t mean that a community lacks water. It can come via water trucks or public water intakes instead of a full plumbing system, but it should be accessible wherever people are, she says.

But settlements on conservation land actually damage water reservoirs that supply the entire area. The land is protected because it not only preserves vegetation and fauna but also absorbs solar radiation and allows aquifers to be replenished.

When homes are built on conservation land, there’s a loss of biodiversity and carbon sequestration, says Enrique Pérez-Campuzano, associate researcher at the Instituto de Geografía at the Universidad Nacional Autónoma de México. At the same time, water is contaminated in communities that lack plumbing, because wastewater is dumped directly into the ground.

But in the face of such dire consequences, he says, the city must take its share of the blame. 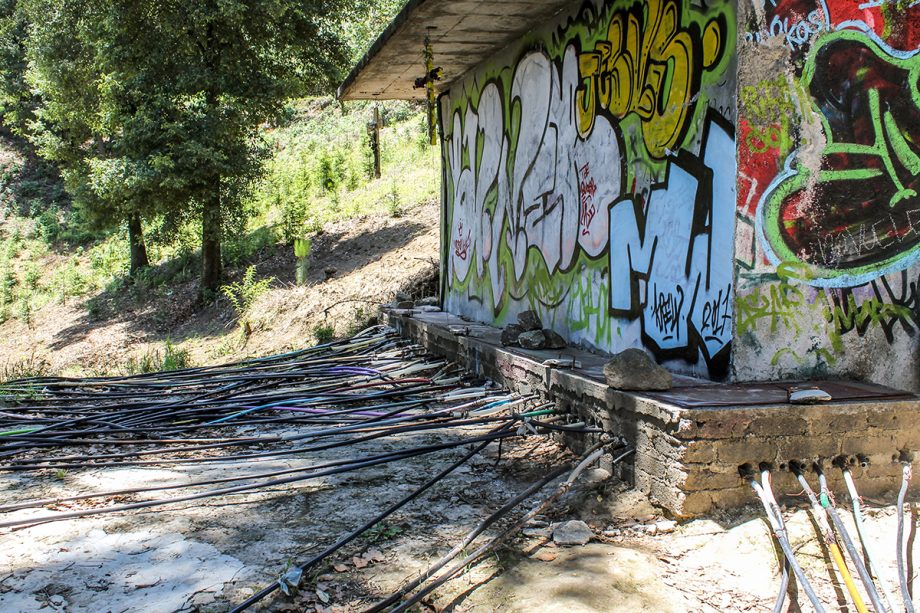 Some farming is allowed on conservation land, and those farmers have wells to feed their crops. But when illegal settlements develop, entire communities connect to those and other wells to get water.

“The problem of irregular settlements is not a water problem, it’s a problem of urban planning,” Pérez-Campuzano says. “If we did not have a housing deficit, we would not have to settle here.”

Hector Manuel Reyes Martínez, director of the Agua Potable y Potabilización office at the city’s water-management agency, says it’s not possible to provide water to illegal settlements, because those areas lack infrastructure. Another reason, he says, is that the city government and its agencies have an obligation to ensure that green areas are conserved.

“The truth is that we could not be accomplices to that kind of thing,” he says.

Still, people are building on conservation land even without the promise of amenities, and they’re increasingly finding workarounds.

The Procuraduría Ambiental y del Ordenamiento Territorial of Mexico City (PAOT) is a public organization that works to protect the territorial and living rights of citizens. In a 2010 study, the organization found that 30 percent of the city’s illegal settlements on conservation land – in 2009 there were 835 in total – had drinking-water supply systems, as well as drainage. The study doesn’t clarify who provides these services.

In some cases, off-the-books water systems have been in operation for decades.

Rosa Pérez Gómez, 67, came to live about 25 years ago in the Tierra Colorada settlement in an area known as La Magdalena Contreras. Five years later, neighbors connected hoses to a well at the top of a hill. The hoses stretch down the hill and connect to homes along the way. About twice a month, Pérez Gómez connects to a neighbor’s hose and fills buckets, jugs and a large water tank.

Pérez Gómez came to Tierra Colorada from Puebla, a state to the east of Mexico City. She rented places to live for years, but her landlords often gave her a hard time. 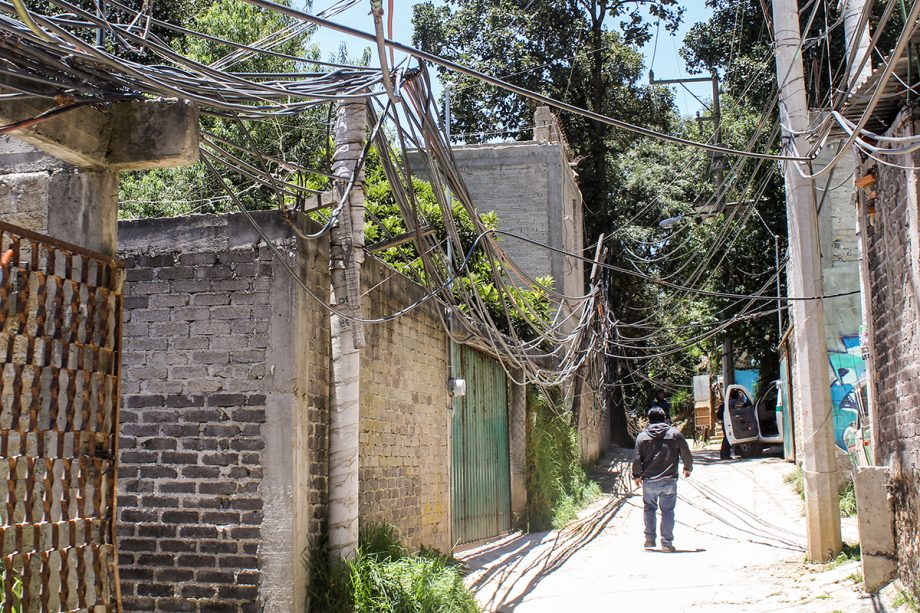 The streets in the Tierra Colorada settlement, which exists off the city's infrastructure grid, are lined with hoses that residents use to connect to nearby wells.

“I came when it all looked very ugly here,” she says.

Now, her two-room home is built from cardboard slats secured to a single cement wall.

Santiago’s neighborhood is called Surco de Encinos. It’s in La Magdalena Contreras borough in the city’s southwest sector, which includes just under 6 percent of the conservation land in the city. She came here in May 2016 with her husband and two children. More than 1,500 families live in the 12 illegal neighborhoods in the area. A small portion of the roughly 50,000 illegally built homes that exist around the city are on conservation land, according to 2009 estimates by the local government.

Santiago’s house is reached via a steep road that’s paved in some spots and rough earth in others. The neighborhood is cluttered, a mix of some multi-story homes built from better materials, while some are made of cement and cardboard. Among the families are farmers who cultivate their plots with maize under special guidelines that allow limited farming on conservation land. There are grocery stores but few other services.

After more than 20 years of renting, Santiago thought the chance to buy 1,076 square feet of land was an attractive proposition. She pays 3,000 pesos (about $166) per month and hopes to pay off the debt by March.

She says she knew before she moved that there were no water pipes supplying the homes in Surco de Encinos, but she didn’t imagine life would be this hard. She heats water on her stove to bathe. Bottled water serves her cooking needs. 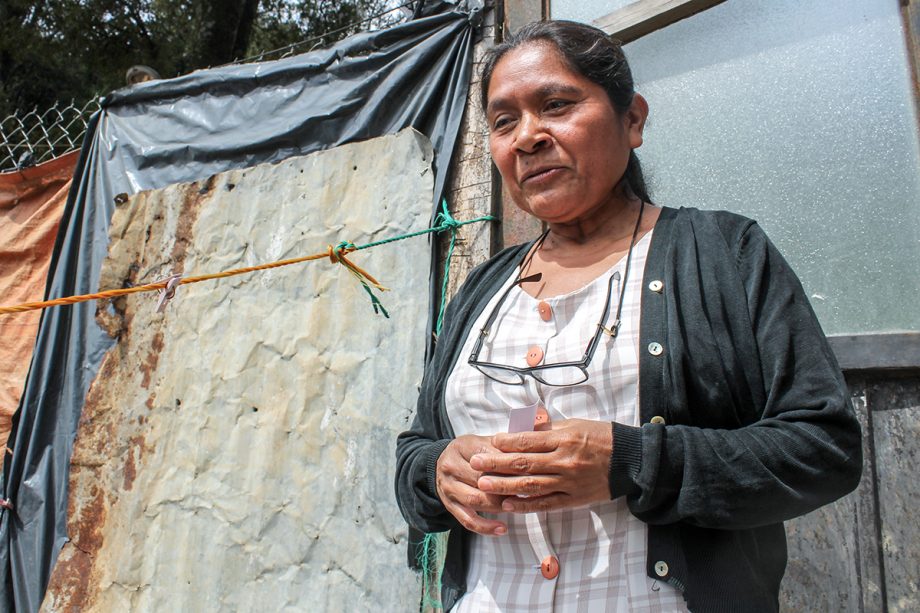 Silvia Santiago has lived in the Surco de Encinos settlement for nearly two years. It's a challenge to live without running water, she says, but she can't afford to live anywhere else. Housing advocates say that the city government is partly to blame for the proliferation of illegal settlements, because it hasn't controlled the cost of housing in the area.

La Magdalena Contreras supplies drinking water to residents via water truck once a week, says Vicente Rodolfo Hernández Bautista, who runs the local borough’s division that deals with illegal settlements. That provision isn’t a show of support for construction on conservation land, but rather a practical acknowledgment that the city can’t deny people the right to water.

But Santiago says the truck only comes once a month – not nearly enough. Instead, she relies on water from local farmers with wells, who agree to let her take water twice a month, for which she gives them a paltry payment. Every receptacle she owns is put to use, she says.

She uses the water collected from the rain for the bathroom and to mop and clean the patio, she says. The water they use to bathe is later used for the toilet.

Santiago is aware that she faces these difficulties because she lives in an irregular zone. Her hope, she says, is that someday her land and that of her neighbors gets regularized.

“I have faith in God, hope in God that they won´t be able to kick us out and that someday this becomes regularized. This is what I hope for,” she says.