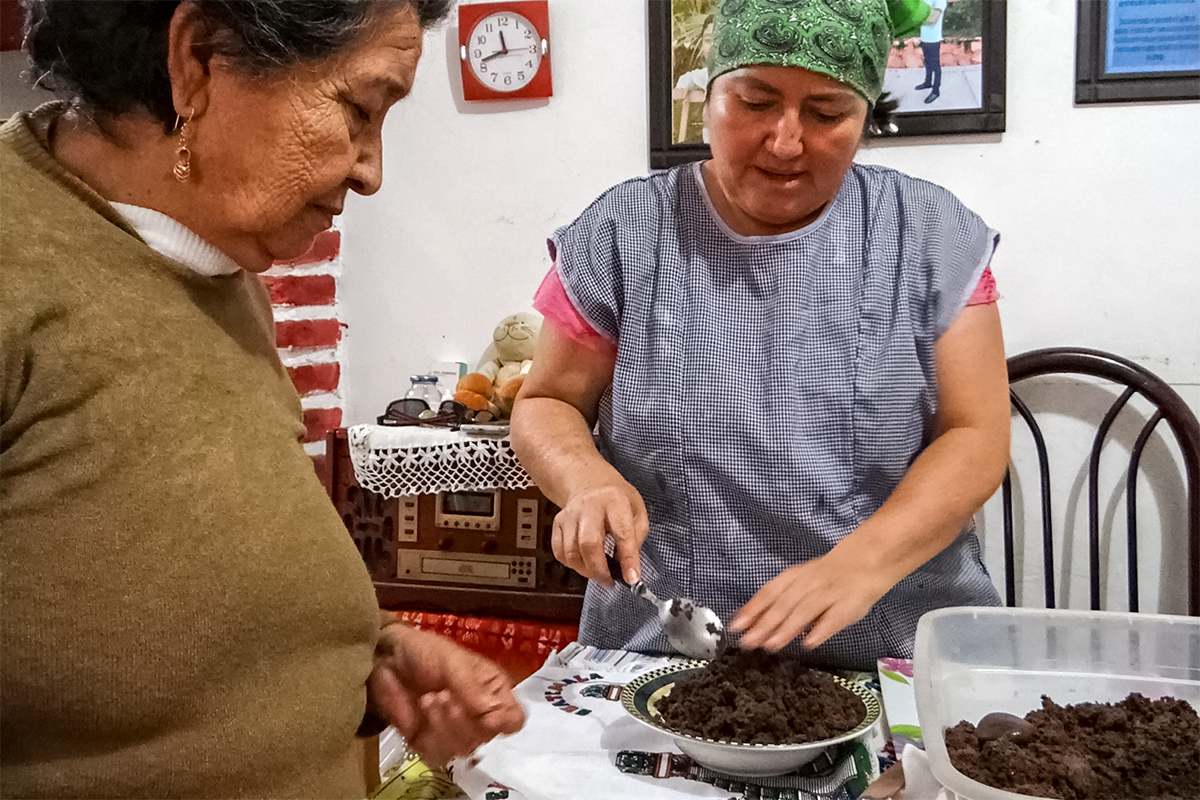 “I like for the chocolate to taste like cacao, to feel the cinnamon, the sweetness of the sugar,” Velasco says with a smile as she quickly but carefully molds the dough into medium-sized pearls. To get the taste she so fondly describes, the small-business owner stays away from extracts and flavorings often used in baking and chocolate-making.

Mexico is known for its spice-flavored chocolates, but the craft behind the confectionary often goes unnoticed. For years, locals have earned an income from cacao, a growing export in Mexico. They say traditional farming and cooking techniques help them stay in business. Velasco started her organic food and drink company in 2015, with cacao as the central ingredient, to highlight these techniques and the other indigenous ingredients that she uses to create unique flavor profiles.

Mexico is the world’s eighth-largest chocolate producer, with most of the output coming from the southern states of Tabasco, Guerrero and Chiapas, according to the Secretariat of Agriculture, Livestock, Rural Development, Fishing and Nutrition (Secretaría de Agricultura, Ganadería, Desarrollo Rural, Pesca y Alimentación), the federal agency in charge of farming and rural food production. 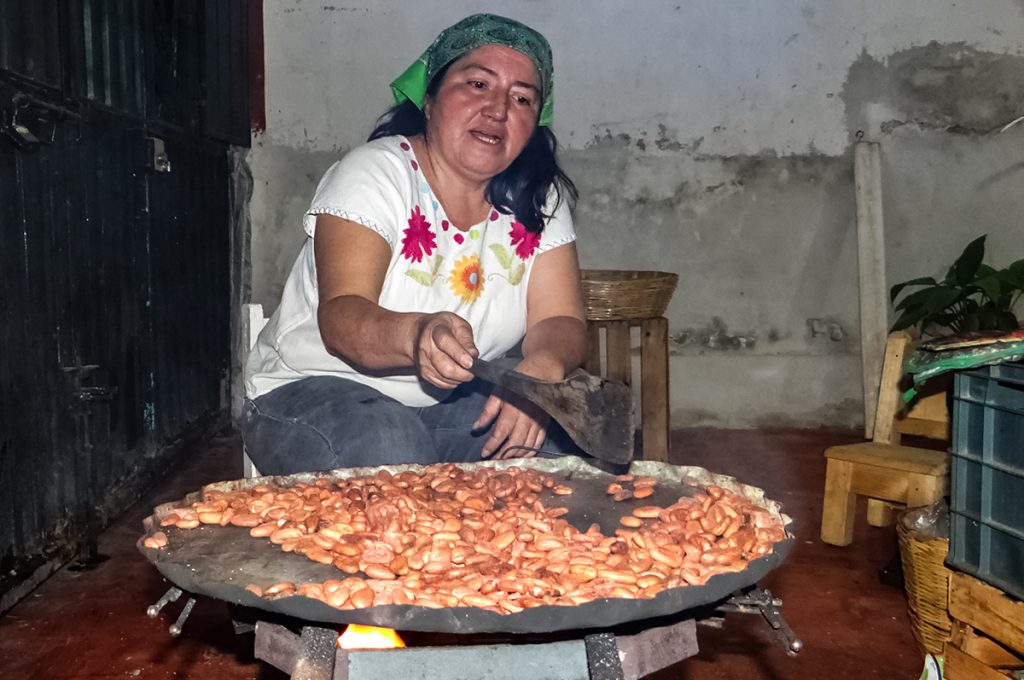 Patricia Velasco toasts cacao beans outside her home in Tuxtla Gutiérrez, the capital of Chiapas. She uses the beans to make the traditional chocolates that she sells through her small business, Organic Products Palmira (Productos Orgánicos Palmira). 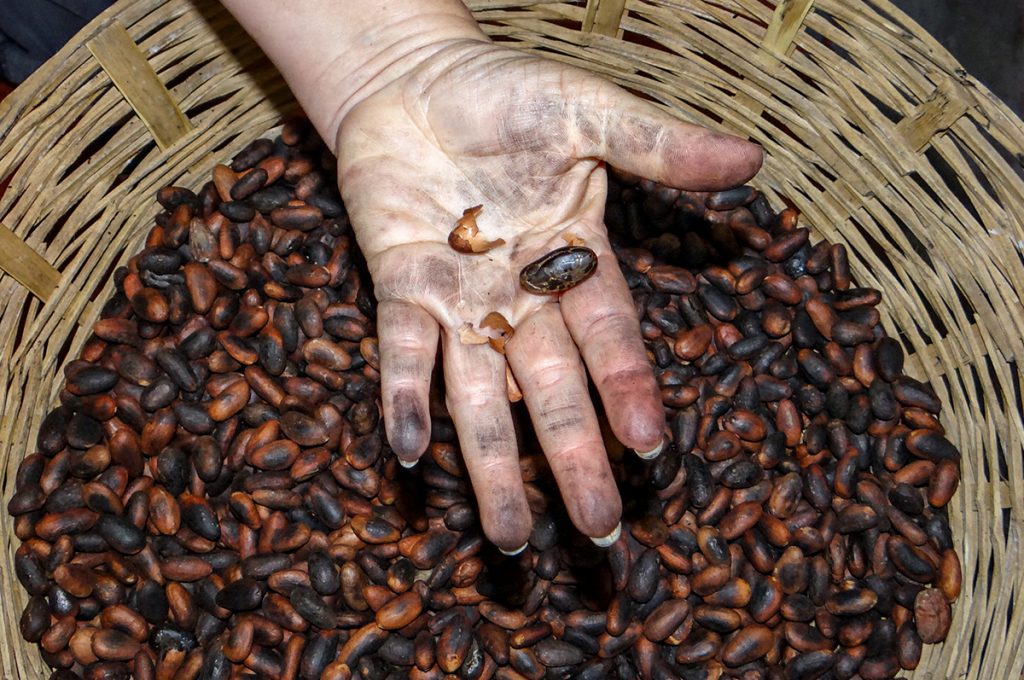 Patricia Velasco shows off a batch of toasted beans, before removing their skins. 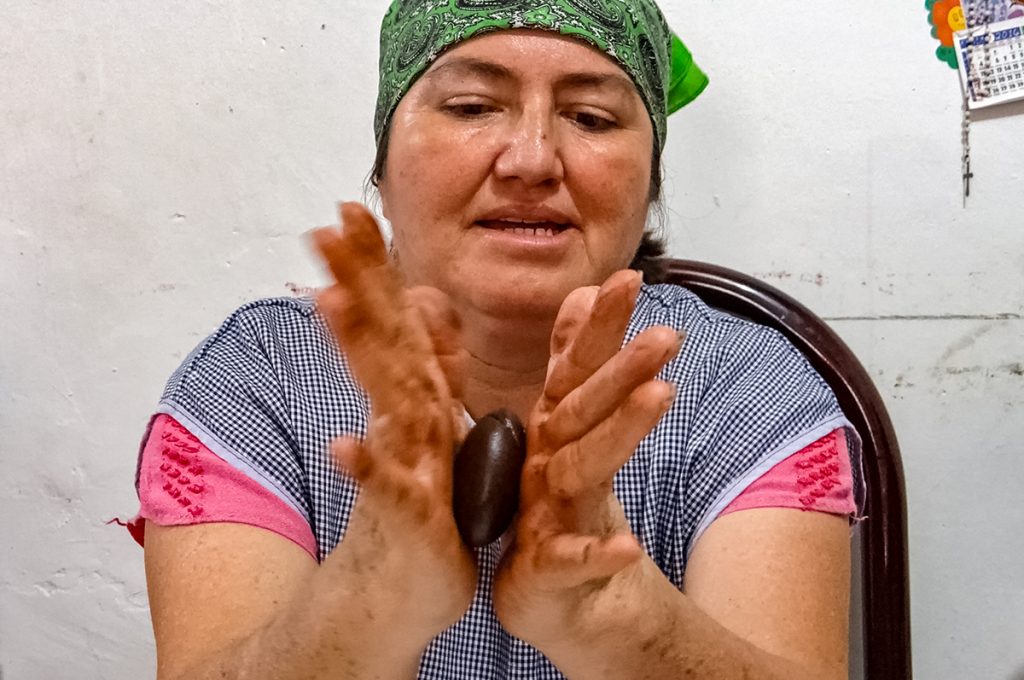 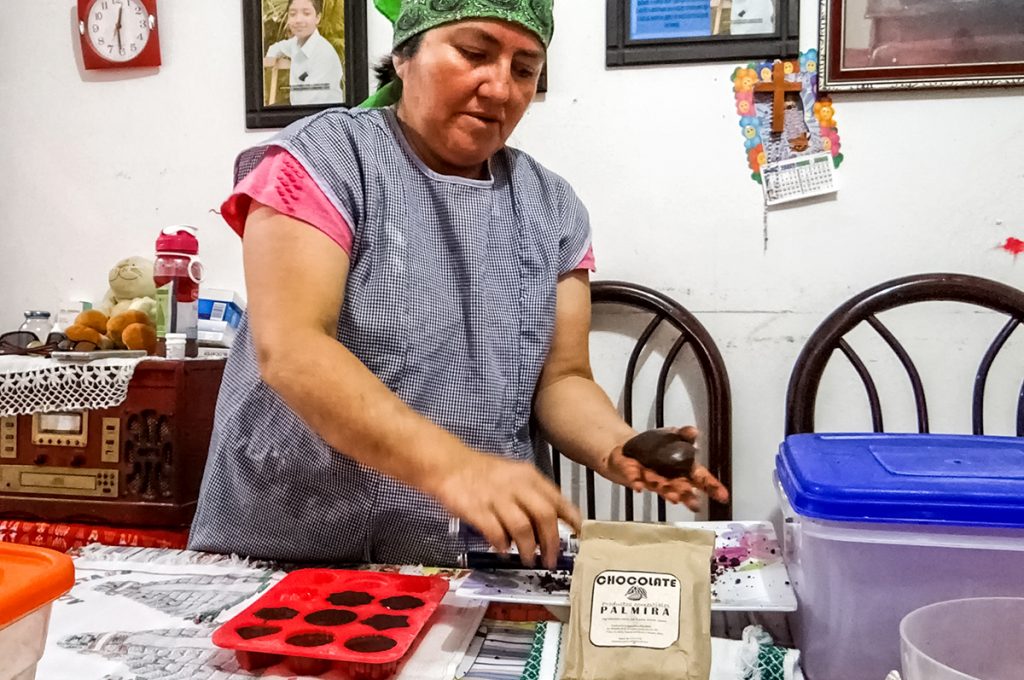 Patricia Velasco places the mixture of ground cacao beans and cinnamon in a cookie-cutter tray to create different shapes, before allowing it to set. 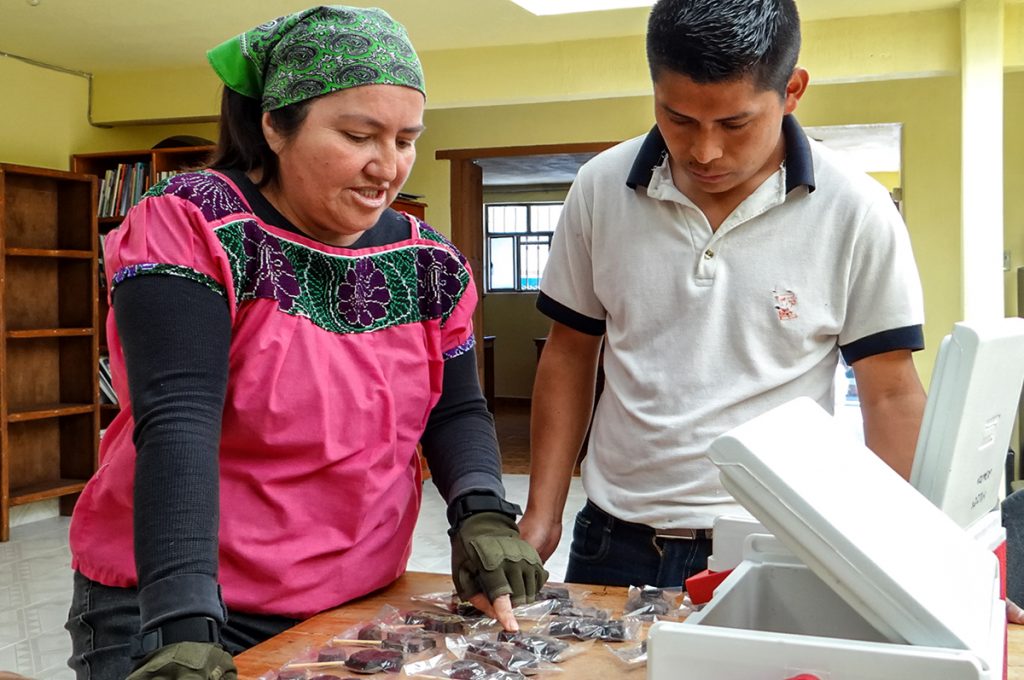 Patricia Velasco (left) and an employee of her business finish packaging the homemade chocolates.

Cacao cultivation is on the rise in Chiapas, Mexico’s southernmost state, as producers adopt varieties that are resistant to diseases such as moniliasis, which causes the crop to rot.

In 2017, Chiapas produced 9,707 tons of cacao. Though the crop has historically been a source of income for many in the region, agroforestry and other new farming techniques are helping to boost local economies, says Mayari Castellanos, a chef and an archaeologist at the Kakaw Cocoa and Chocolate Museum (Kakaw Museo del Cacao y Chocolate) in San Cristóbal de las Casas, a city in Chiapas.

Nearly 41,000 Mexican families rely on cacao for an income, according to a 2013 government report. Velasco says her family once had farms on the coast of Chiapas.

“My family had plots where they used to cultivate coffee and cacao, and they would sell it to support part of our life,” she says. “But we didn’t sell all of it. My grandmother always saved some for our use.”

Cacao is used in local dishes and beverages such as “mole,” “pozol” and “tascalate,” and toasted cacao beans can be eaten on their own as a snack. Velasco says the crop is a basic ingredient in many of the products she sells through her small business. She selects her own beans from local harvesters every three months, using up to 60 kilograms (132 pounds). Each kilogram (2.2 pounds) goes for 65 Mexican pesos ($3.32), she says.

To make a batch of 18 of her hand-crafted chocolates, Velasco begins by toasting the cacao beans.

“You should toast the cacao seeds – with everything and skin – in the oven or in a pan for at least 15 minutes,” she says as she carefully stirs the beans in a large, flat pan over a charcoal stove to prevent burning. Next, she cools the beans and removes the skin, in preparation for the next step.

“You should put cinnamon, sugar and the toasted seeds in a food processor and finely grind them – and feel how the aromas mix and produce a semi-creamy paste,” she says. “You will have the best traditional chocolate on the coast of Chiapas.”

The process may sound easy, but it is a lengthy one that requires homegrown expertise, the chocolatier says. Years of learning how to make chocolate alongside her grandmother helped Velasco determine the quantities of sugar and cinnamon needed to get the right balance of sweet and bitter.

“There are regions in Chiapas, like the center of the state, that use cookies or large amounts of sugar when grinding the beans,” she explains. “The flavor gets compromised.”

Velasco runs the business out of her home but sells her products at farmers markets to locals as well as to tourists visiting Tuxtla Gutiérrez, the capital of Chiapas.

María Guadalupe de la Cruz Cruz says the strong aroma of toasted cacao is what lured her to Velasco’s products. She’s come to love the chocolates because they’re all natural and semi-sweet, she says.

“You go to the supermarket, and supposedly you buy chocolate as a bar or powder – but you read the label, and it’s only 10 or 15 percent cacao in what these products have,” she says, comparing products.