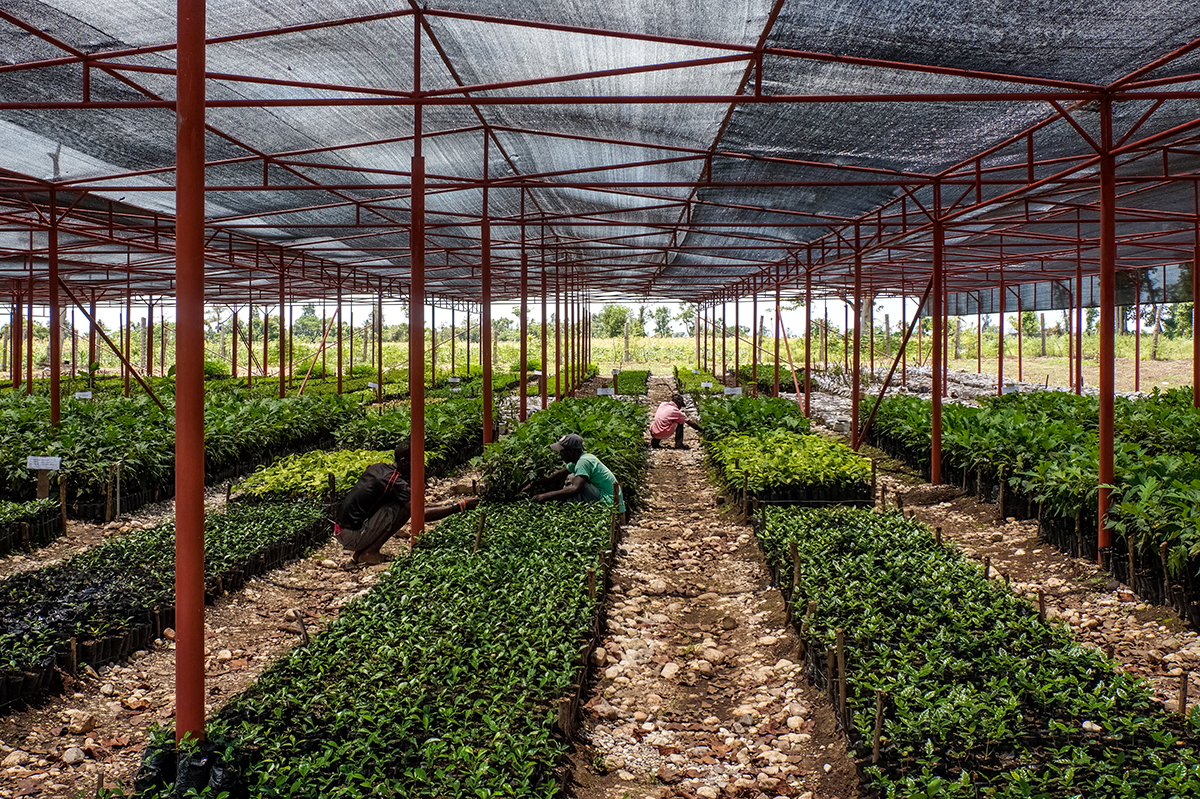 CAMP-PERRIN, HAITI — As much of the southern United States recovers from the destruction brought on by last month’s Hurricane Michael, farmers and scientists throughout Haiti are still working to recover plant life and forest destroyed by a different hurricane – Hurricane Matthew – in 2016.

With their heads down and eyes fixed on granules of soil, a group of agronomists in Camp-Perrin, an area in the country’s Grand Sud region, is working to bring their germplasm-center project to fruition. The project, they hope, will help restore local forests.

Bernadin Jean Bosco, an agronomist and head of the germplasm center, says this project is the government’s greatest gift to Grand Sud. Germplasm refers to seeds that are maintained for the purpose of fostering plant reproduction and preservation, and the centers are home to millions of seeds that Jean Bosco says will help reforest his country.

The center extends over 14 hectares (34.6 acres) and boasts eight shade houses, each more than 250 square meters (2,700 square feet) in size. Inside, more than 4.5 million seedlings are growing. From pomegranate to oranges to breadfruit, the center is working to bring agriculture back to the region. And, most importantly, Jean Bosco says, they are working to regrow dozens of species of trees, including acacia, moringa, coconut, coffee and lemon trees.

“Reforesting Haiti is key to the country’s future,” he says.

The story of Haiti’s deforestation problem is complex, but it’s often oversimplified in global narratives, argues Andrew Tarter in a 2016 essay entitled Haiti is Covered with Trees.

An aerial image of the border between Haiti and the Dominican Republic often makes its way through social media feeds. The image, featured in a 1987 National Geographic centerfold, strikingly contrasts the Dominican Republic’s lush forest with Haiti’s barren landscape. And neither the narrative nor the data have changed much since then, Tarter says. 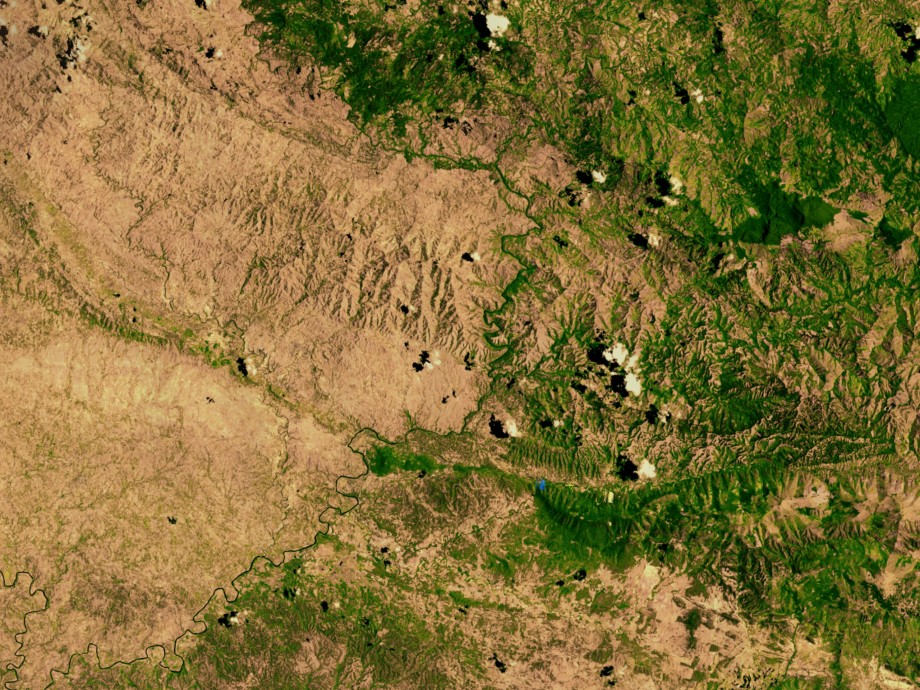 The widely repeated statistic, which Jean Bosco also mentioned, is that just 2 percent of Haiti is forested.

While charcoal production is often blamed for the country’s lack of trees, Jean Bosco and others say their country’s inability to rebuild after repeated assaults by storms and natural disasters is primarily responsible for agricultural losses. Stilted political progress and lack of investment mean that recovery from any storm takes a decade.

Total agricultural losses from Hurricane Matthew were estimated to be more than $600 million in 2016.

Joseph Ronald Toussaint, the principal private secretary to the minister of environment, says reforestation is a priority. He says 13 germplasm centers, such as the one in Camp-Perrin, are under construction across the country, thanks to a $2.5-million investment from Taiwan.

“Haiti’s government will never stop thanking Taiwan’s government for being the only partner to unwaveringly believe in this project from the very start, thus making it a success,” Toussaint says. “And because of them, other donors have followed suit, ending up giving up on their reluctance to help us create other germplasm centers.”

The total amount of aid Haiti has received specifically for reforestation efforts is unknown. 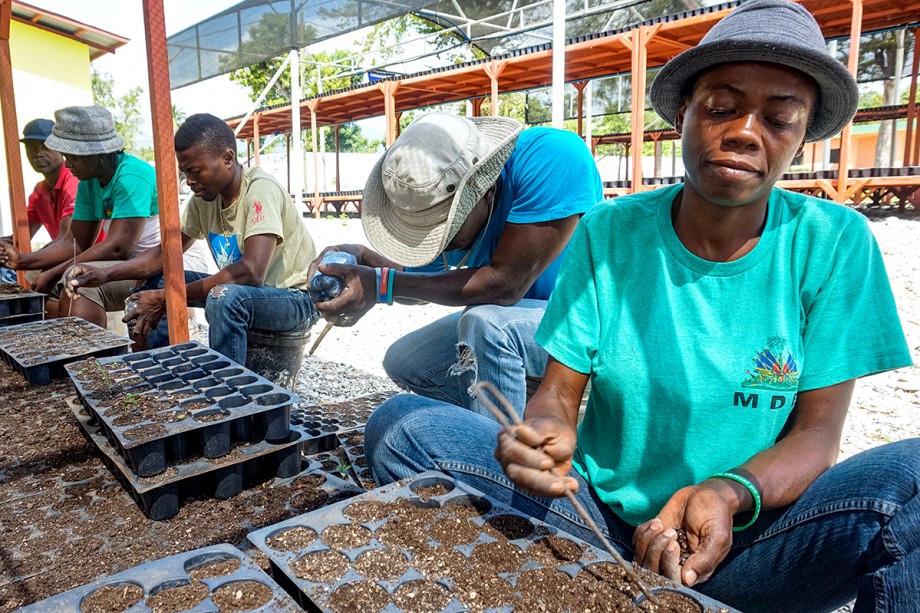 The germplasm center is home to more than 4.5 million seedlings.

Guillaume Cheng-hao Hu, Taiwan’s ambassador to Haiti, says he believes environment and education are the two most important aspects of any country.

“Care for the environment is universal,” he says. “The environment is a top priority for Taiwan, and we also want to make Haiti a priority in our reforestation efforts,” Hu says. “Time and again, I receive ambassadors from other countries, and I encourage them to invest in more germplasm centers to help Haiti find a way out of its environmental crisis.”

For residents, the centers are cause for celebration.

Liliane St Preux, 36, who lives near the Camp-Perrin center, says she can’t wait for the return of the breadfruit tree.

“The breadfruit was once very present in our daily lives,” she says, adding that people drink the juice and even barbecue the fruit. “We’re very appreciative of the fact that people will start feasting on it again a few years from now.”