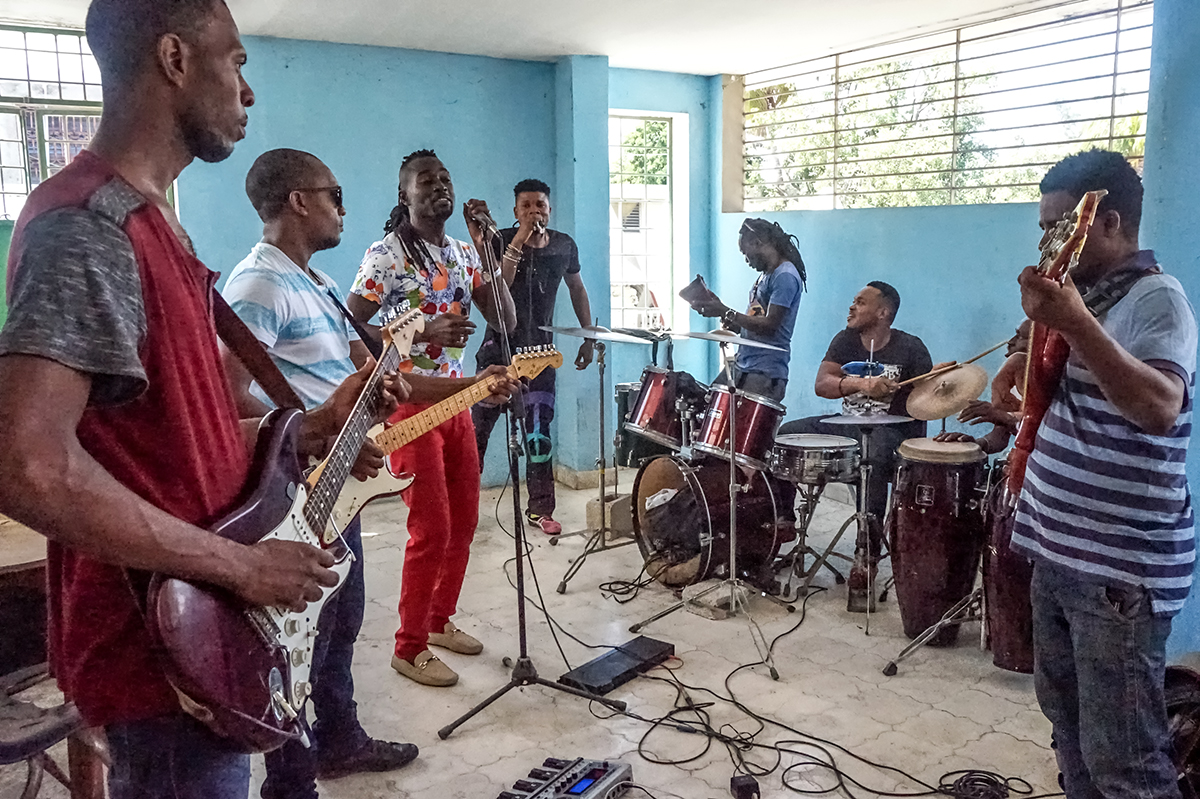 PORT-AU-PRINCE, HAITI — After completing a bachelor’s degree in administrative management in 2003, 36-year-old Fed Dessein decided to venture into a profession then popular among young Haitians — a singer-songwriter of compas music, a traditional Haitian genre.

He dedicated himself to hours of songwriting, which brought him hostility from family members who couldn’t understand why he would want to pursue a career with no ties to what he had studied in university. But Dessein could not imagine ignoring his passion for compas, he says.

Now Dessein is the lead singer of Kool Jazz, a 10-member compas band that entertains crowds at performances across Port-au-Prince, Haiti’s capital.

But the genre is evolving quickly, he says. Young musicians are trading the homegrown sound for musical styles and techniques from other parts of the world, he explains. Dessein says he is not ready to let go of the genre that’s provided him with a living for years.

“My goal is to ensure compas withstands the test of time and remains alive,” he says.

The musical genre, rooted in Haiti, is enjoyed across the Caribbean. But the popularity of genre comes with a cost, some say.

Compas emerged in the 1950s with Haitian musicians such as Nemours Jean-Baptiste producing songs in Kreyòl, the local language. Using brass instruments, drums and traditional instruments, artists developed a sound that is often accompanied by dancing. The style of dance, also known as compas, is similar to Dominican merengue dancing and features body movements driven by the music’s tempo.

But compas is losing its favor with local audiences, as musicians bring new dance routines, production techniques and sounds to their work, local experts and fans say. Urban styles of music including rap, reggae, and rock are more popular than compas among Haitians, according to a 2017 survey conducted by Ayiti Mizik, an organization of Haitian music professionals.

"Jwe jwet la" is one of many traditional compas songs written and performed by Fed Dessein and his band, Kool Jazz. (Photo by Anne Myriam Bolivar, GPJ Haiti)

As musical interests shift, veteran compas artists are going out of business, says Max Evens Cémelus, who hosts a radio show at a local station.

“Oldies used to be our nation’s most sought-after music, and today, however, almost everyone in Haiti is losing interest in them,” he says.

But Ernst Henry, a longtime fan of Dessein’s band, says that veteran artists will always be remembered for their contributions to the genre. Henry says that these artists bring Haitian culture to life with each song and performance.

“There’s nothing more gratifying than slaking our thirst at the very source of our traditional music,” he adds.

Veteran artists need to take an active role in preserving compas by teaching and mentoring young artists, Dessein says. “We aren’t against other styles, but we defend what we have to defend,” he says.

“It’s a good thing that there’s actually diversity in Haitian music, because time changes, and so does the audience – which means the music has to change,” says Widmaeir, who hosts a radio show.