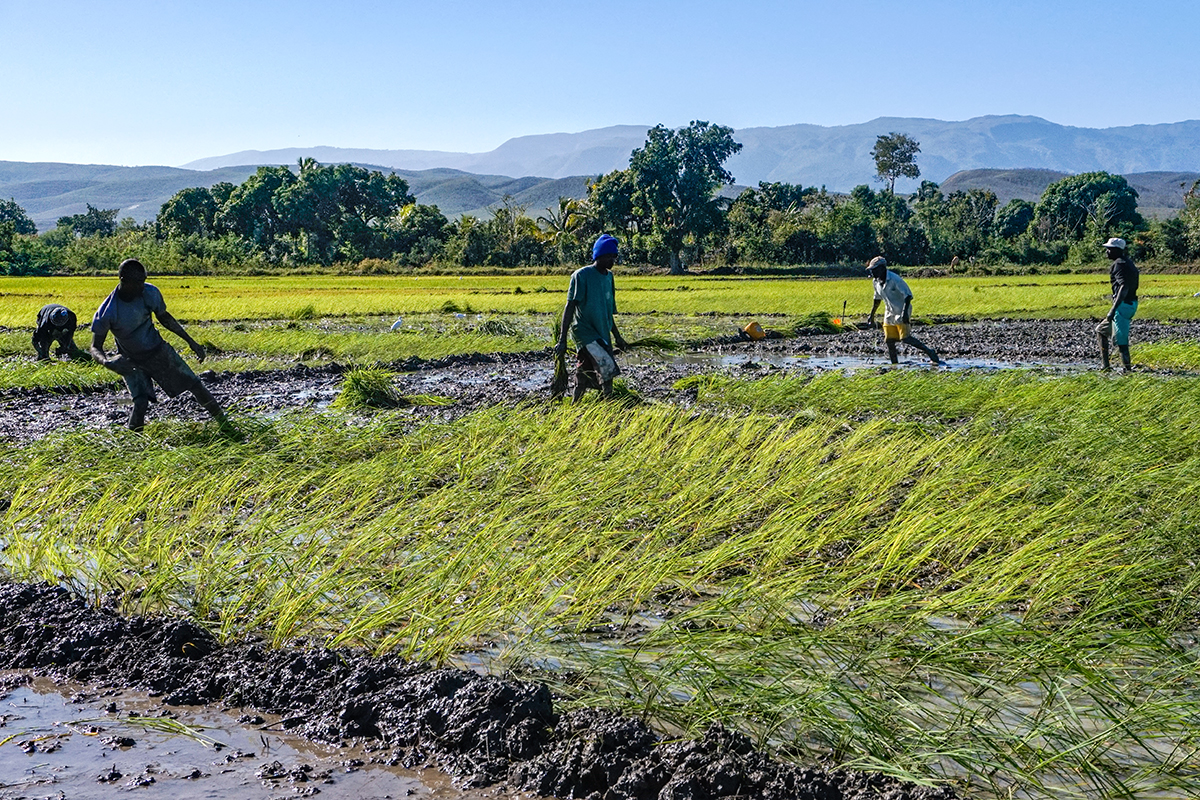 PONT-SONDÉ, HAITI — Dawn breaks here with the rooster’s crow, interrupting a quiet landscape. Morning dew glistens on green leaves that wait for the sun’s warmth. And farmers, armed with “djakouts,” locally made bags, set out to conquer the fields.

Among them is Galan Damas, the 43-year-old rice farmer who owns this land. He sees the government’s investment in his rice paying off. In a few months, the rice will be ready for husking, he says.

In May 2017, Haiti’s government launched Caravan for Change (La Caravane du Changement), which aims to revive rice production in the Artibonite Valley, the country’s primary rice-growing area, where Damas lives. As many as 3,000 temporary workers will also clean out government-built irrigation ditches that date back 60 years. About 100 of those workers will have a chance to continue in the job for two or three years, according to Jean Willy Jean Baptiste, a former senator and one of the leaders of the program.

If the initiative is successful, it could transform Haiti’s rice sector and establish Haitian farmers as primary rice providers for the country. 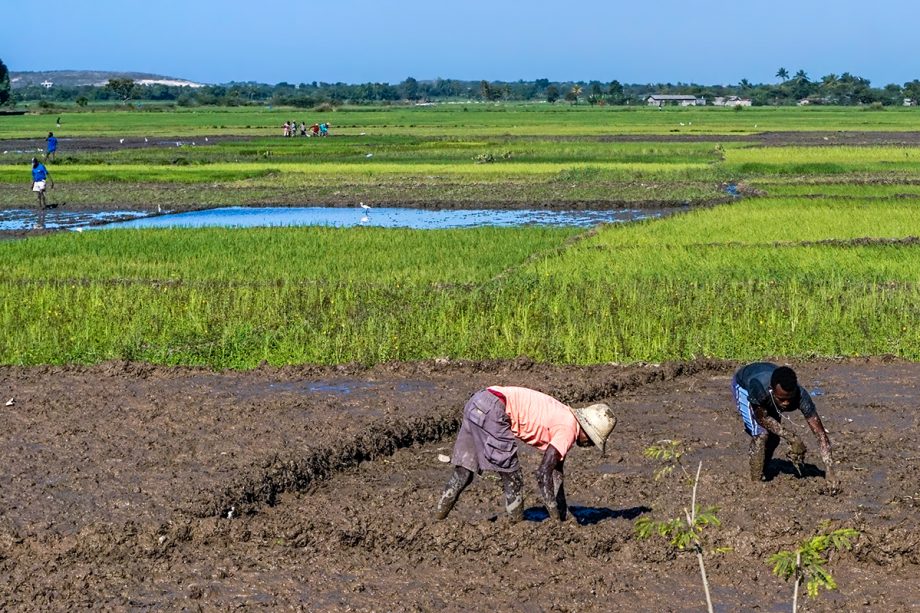 Rice farmers like those in Haiti’s Artibonite Valley were once a key part of the country’s food-production chain. But in recent decades, cheap imported rice from the U.S. has taken over Haiti’s rice market.

Right now, Haiti relies largely on imported rice, which is sold in some cases for less than half the price of locally grown rice.

“As rice farmers, we’re aware of the spikes in locally produced rice prices on the local market, and the cost of producing rice locally is the major factor behind the spike,” Damas says. “The only way we can produce more rice is if we modernize agriculture and reduce production costs.”

Haitians have always eaten rice, but their consumption of the grain increased in the late 1980s, when the Haitian government eased restrictions on imports of the grain.

Now, rice is a major import in Haiti, accounting for about 8 percent of all imported goods. The country takes in about 10 percent of the rice grown in the U.S. Between 2007 and 2016, imported rice from around the world amounted to more than 80 percent of Haiti’s total rice supply.

Between 1985 and 2011, Haitian consumption of rice grew from accounting for 7 percent to 23 percent of the average daily caloric intake. During those years, subsidies for U.S. rice farmers, changes to Haiti’s tariffs on imported rice and other political shifts fundamentally changed the way Haitians eat.

“Every single Haitian ended up getting into the habit of consuming rice,” says Jean Baptiste.

As rice farmers, we’re aware of the spikes in locally produced rice prices on the local market, and the cost of producing rice locally is the major factor behind the spike. The only way we can produce more rice is if we modernize agriculture and reduce production costs.Galan Damas, a 43-year-old rice farmer

Former U.S. President Bill Clinton publicly apologized in 2010, claiming responsibility for subsidizing U.S. rice farmers in a way that made it impossible for Haitian farmers to produce a rice crop that would feed their country.

On top of that, a serious lack of agricultural infrastructure makes it impossible for those farmers to imagine feeding the country.

“We fail to put our land to the fullest use, and the upshot of that is that we can only produce for home consumption, with very little surplus for sale, but not enough to turn it into an industry,” Damas says.

The Copenhagen Consensus Center, a U.S.-based think tank focused on economic issues, noted in a 2017 analysis that Haiti’s imposition of a tariff on imported rice would likely mean higher costs for consumers, while Haitian farmers wouldn’t necessarily be able to increase their yield to meet the demand. Other possible options, including fertilizer subsidies and crop insurance, were also unlikely to solve the problem without further interventions.

However, the Copenhagen Consensus Center drafted its analysis based on the Haitian farming sector’s current capacity and infrastructure. (The center and its director, Bjorn Lomborg, have been criticized for their stance on climate-change policy. The analysis noted here focuses on economic, not climate, issues.) 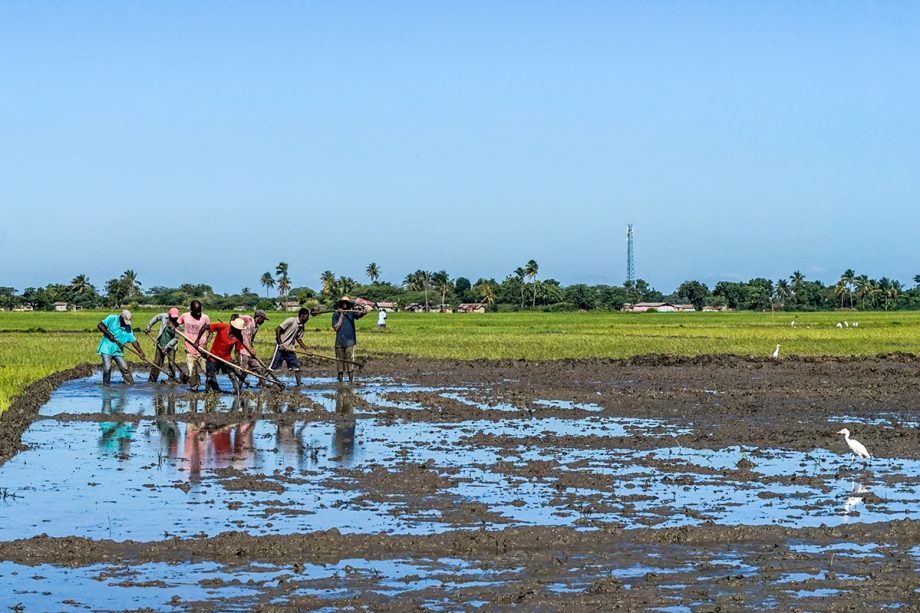 If Caravan for Change succeeds in improving the current irrigation systems and extending them across an additional 18,000 hectares (44,000 acres), a total of 50,000 hectares (124,000 acres) will be available for rice farming in the Artibonite Valley, Jean Baptiste says. Right now, there are irrigation channels across about 32,000 hectares (79,000 acres).

The solution to Haiti’s food problem should come from within Haiti, he says.

“I agree that we can get aid from other countries, but it behooves us as stakeholders to start with our nation’s resources,” he says.

Sylvain Sama, an agronomist who works with l’Organisme de Développement de la Vallée de l’Artibonite, a development organization focused on the Artibonite Valley, says the Haitian rice sector’s primary problems are lack of infrastructure, persistent use of old farming methods and a dearth of money to invest into the sector. Infrastructure development will solve only part of the problem, he says. Farmers also need a better business infrastructure – lending institutions and other support systems – and equipment upgrades, as well as development of the watershed.

I agree that we can get aid from other countries, but it behooves us as stakeholders to start with our nation’s resources.Jean Willy Jean Baptiste, a former senator and one of the leaders of La Caravane du Changement

Sama is optimistic. La Caravane du Changement is boosting rice farmers by cleaning out ditches and draining the land, but much more needs to be done.

“Increasing the volume of rice production depends entirely on our resolve,” he says.

For many farmers, though, the more fundamental problem is that most people in this country live day to day, with little or no savings to spend to develop their businesses. Across the board, farmers say they worry most about finding and saving the money they need to make both capital and daily investments.

Max Démosthène, a 65-year-old rice farmer, says what he needs most are training on modern farming techniques, and financing to invest in his crop.

Haitian farmers need a credit agency focused on agriculture, he says. That, combined with fresh expertise on how to best manage rice production, might allow Haitian farmers to take back the market, he says.

“It’s quite a bad mistake to rely on other people to get food, all the more so as we’ve lots of land and the means to make our land produce,” he says.

That hope in the land’s ability to produce has farmers excited about how they can use their skills. One day, they say, they could feed the nation.

“We hope the government will work with farmers to help our motherland get rid of imports and hunger,’’ Damas says.