Skip to main content
The story you are reading was published on Wednesday July 5, 2017. To read more recent stories click here. 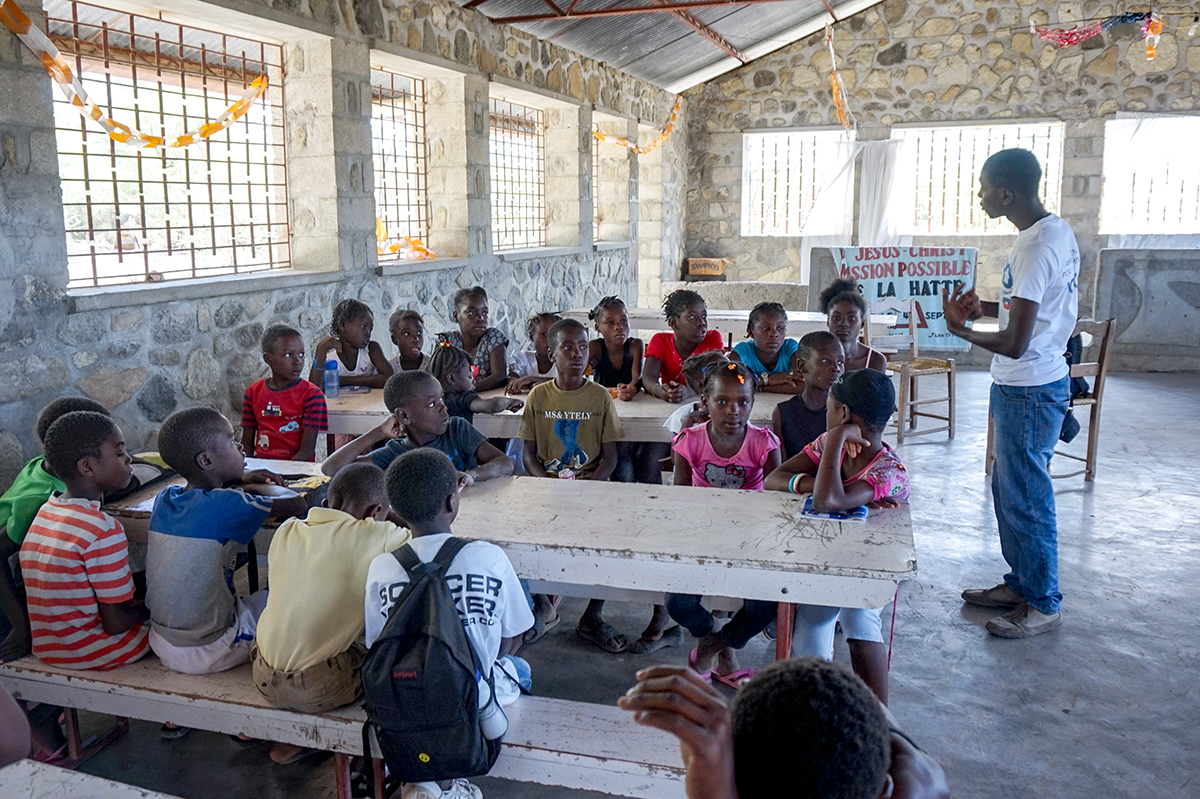 CABARET, HAITI — Gary Pierre, 11, a student in rural Hatte, used to go to his friend’s house to seek help with his schoolwork. Now every Saturday he goes to a church in his rural community to receive help with reading and math from university students.

“My parents can neither read nor write, and I have no choice but to stand on my own feet to absorb lessons,” he says. “With this program, I am able to fill in my learning gaps.”

The tutoring program, Organisation des Jeunes pour le Développement de la Hatte, was begun in 2014 by Jean Robert Louis, 31, a father of two living in Hatte. Hatte is a small community located just north of the town of Cabaret, which is more than 30 kilometers (18 miles) from Haiti’s capital Port-au-Prince.

As a health care worker in contact with many in the community, Louis could see the trouble families were encountering because of illiteracy. He decided to start a group to support children whose parents are illiterate.

“Education is the foundation of any society, and if we want to make change happen in our community we must start with the children who are the hope and the future of our tomorrow’s society,” Louis says.

Haiti’s Ministère de L’Éducation Nationale et de la Formation Professionnelle, the ministry of education and vocational training, is making literacy a priority and signed onto UNESCO’s Sustainable Development Goals in 2015, which aims to “ensure inclusive and equitable quality education and promote lifelong learning opportunities for all.”

Education is the foundation of any society, and if we want to make change happen in our community we must start with the children who are the hope and the future of our tomorrow’s society.Jean Robert Louis, founder of Organisation des Jeunes pour le Développement de la Hatte

The goal is that by 2030, all young people and a significant proportion of adults, both men and women, will be able to read, write and count, according to UNESCO.

Haiti’s educational system has struggled for years. The 7.0 earthquake that struck Haiti in 2010 destroyed or badly damaged at least half of the nation’s 15,000 primary and 1,500 secondary schools, according to UNESCO.

But even before the earthquake, nearly 500,000 school-aged children were not in school and 25 percent of the rural areas did not have schools, according to a 2011 report by the United Nations Economic and Social Council, in partnership with the Istituto Internazionale Maria Ausiliatrice, a global children’s rights advocacy organization.

In addition, two-thirds of the country’s high schools and vocational schools are concentrated in major cities, particularly in the capital city. As a result, a significant number of Haitian children in rural areas do not receive an education, according to the report.

According to the World Bank, 90 percent of Haitian children between 6 and 12 years old are now enrolled in school. However, Haiti’s remote rural areas still have a limited number of public schools and a lack of qualified teachers.

That’s where groups like the Organisation des Jeunes pour le Développement de la Hatte come in. Currently, seven volunteers travel from the Université de Port-au-Prince, a university in the capital, to help 40 children on Saturdays.

The volunteers bring biscuits and juice to the pupils to start the day “because we know well that we do not learn with the empty belly,” Louis says.

Desulma Pierre, a volunteer with the group, says illiteracy is visible in Hatte. When he began tutoring, he noticed that many in the third year of school could not spell their own names.

“It is really hard,” he says. “It was a very complicated situation. But now we can say that it goes better with the completion of reading and naming that is organized in the classes. I manage to evaluate and make the difference for the previous years.”

Milodin Innocent, a father of four, says his fourth grade son was not doing well in school prior to participating in the Saturday sessions because he had no one to help with homework. He is grateful for the university student’s help.

“It helps our children to assimilate the courses taught by their teachers, via these volunteers who come to replace us as parents who cannot help them with their school work,” he says.

Darline Joseph, a 24-year-old university student, has been volunteering with the organization for three years. She says she volunteers not just to aid individual children, but also to help Haiti progress.

Louis, too, considers the program one part of a more positive future for the country.

“The first step towards quelling the misfortune of missing out on the opportunity to be the kind of developed nation we want to be, should be to put education at the heart of our agenda, especially now that education positions itself as the most powerful catalyst for bringing changes,” he says.

Louis expresses sadness that several generations of Haitians, especially in the rural areas, are illiterate.

“This makes me feel some kind of anger which triggers my determination to look into other ways to fight for adult literacy,’’ he says.

But for now, looking ahead to prevent illiteracy from becoming an intergenerational issue in the future, children must be the focus, Louis says.

“To change a community, one must start with the smallest, because tomorrow they will replace the parents,” he says. “With this program, we train future parents who can read and write.”

EDITOR’S NOTE: Gary Pierre and Desulma Pierre are not related.