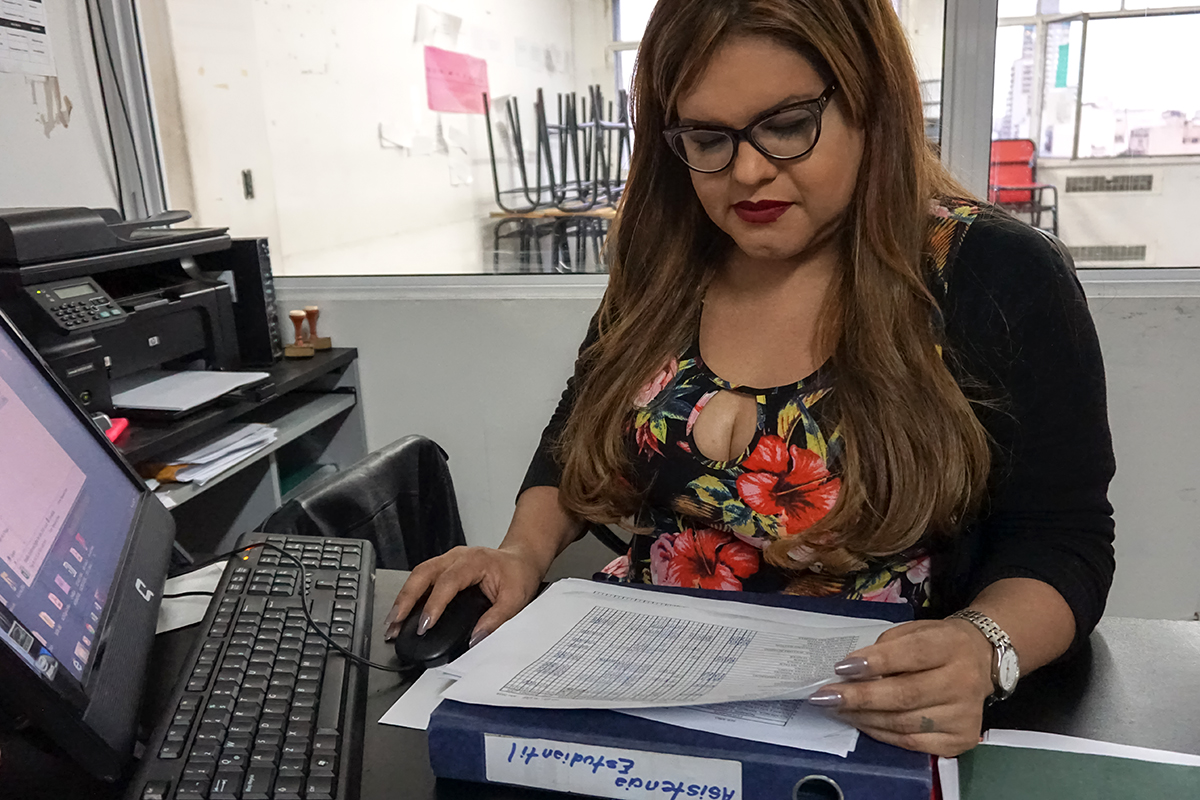 BUENOS AIRES, ARGENTINA — Lucía Romina Escobar dropped out of school and left home when she was a teenager. Her father didn’t understand her gender identity and the two often clashed, she says. He constantly reminded her that her decision to identify as a woman would have dire consequences.

She remembers her father saying, “They’re going to kill you, son.”

Escobar, who is transgender, says her father’s concerns were valid. Despite the country’s track record of passing progressive civil rights laws and policies, it’s not uncommon for transgender Argentines to experience discrimination.

Escobar doesn’t have a secondary education, she got a job at a nightclub where she washed dishes and did other cleaning tasks to earn money for rent and food. Sometimes, she says she engaged in sex work.

“I didn’t like it,” she says, her eyes welling with tears.

The thought of returning to school crossed her mind, but working at night made it impossible. Most classes for adults were in the evening, when she was at work.

Four years ago, a friend told Escobar about a secondary school for transgender people that had just opened in Buenos Aires, Argentina’s capital. The school had a vacant position. Escobar applied for the job and completed her secondary school education shortly after.

“I began to live by day,” she says. “Going out with the light humanized me a little more.”

In 2015, one year after Escobar got her first formal job, lawmakers in Buenos Aires Province approved a law requiring that at least 1 percent of civil servants to be transgender, transsexual or transvestite. Buenos Aires Province is the largest and most populous of Argentina’s 23 provinces.

But the law was never fully implemented. Certain municipalities have implemented some aspects of the law, but others haven’t. 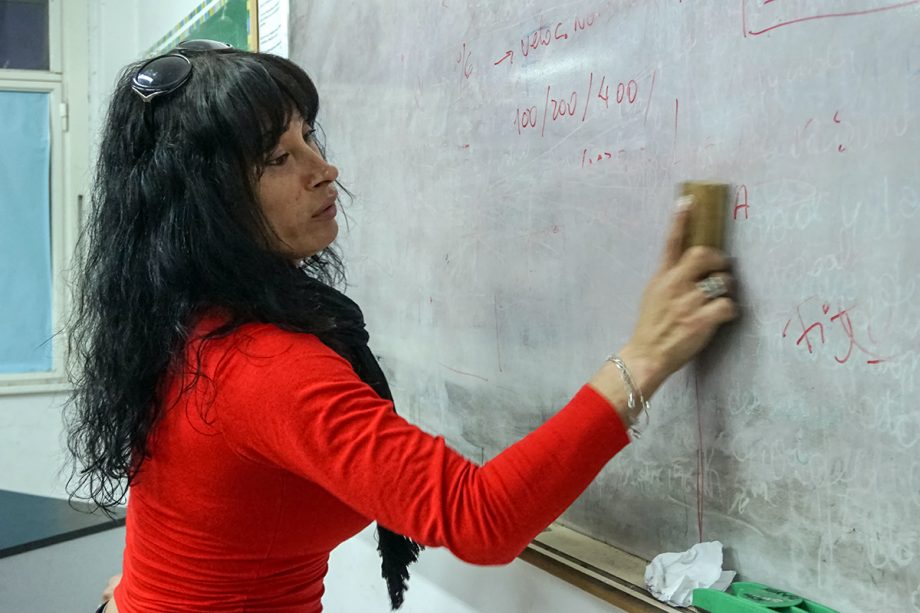 Silvana Álvarez, a student at Bachillerato Popular Trans Mocha Celis, writes on a chalkboard during class. She is in favor of implementing the trans work quota law.

Local organizations promoting gender diversity say formal employment is not an option for many transgender people in the country, but they’re determined to change that. They’re asking legislators to create a new hiring quota at the national level to develop a more inclusive labor force. Another group of advocates say that, even without the law, more transgender people are making their way into the workplace.

According to GLAAD, a North American advocacy organization, transgender is a term used to describe people whose gender identity is different from the sex they were assigned at birth.

In the U.S., more than one in four transgender people have lost a job due to bias against them, according to the National Center for Transgender Equality. Transgender people and other sexual minorities in Argentina face similar challenges, according to a 2017 survey published by Ministerio Público de la Defensa, the public defender’s office of the Buenos Aires city government.

Only 9 percent of the 169 transgender women and transvestites surveyed are employed in the formal labor market, while 70 percent earn income through sex work. Local human rights advocates blame stigma around transgender issues for this disparity.

In 2012, the government of Argentina implemented a law that allows citizens to change on official documentation the sex assigned to them at birth. While this law was enacted shortly after its approval, the hiring law from 2015 is yet to be fully implemented.

“It’s been almost two years since the governor has had the regulation at her disposal for her to sign, and she hasn’t,” says Nazábal who is a supporter of the proposed legislation.

“She never said why she didn’t sign the legislation,” she adds. “We think it has to do with her political position.”

The office of the governor did not respond to Global Press Journal’s requests for commentary. 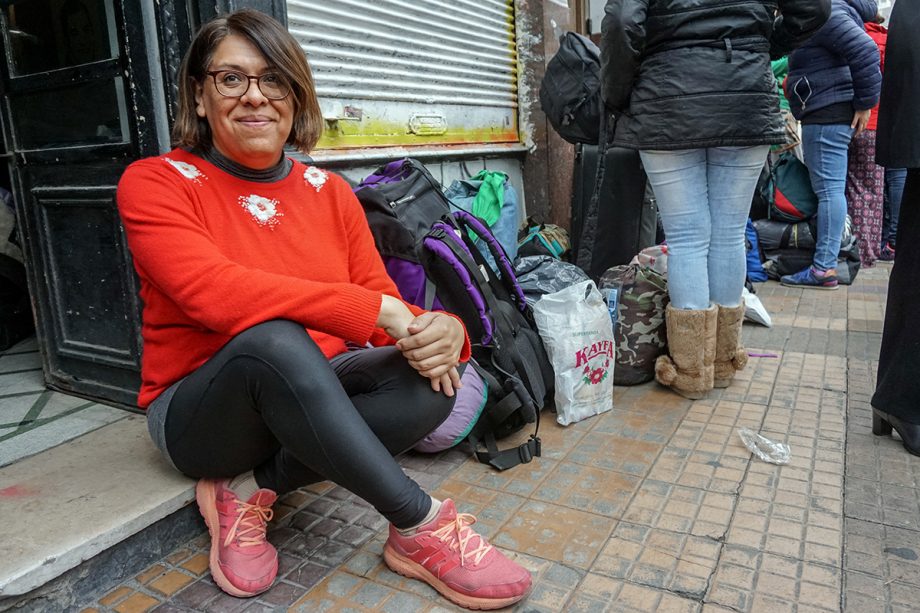 Alba Rueda of Mujeres Trans Argentina attends Encuentro Nacional de Mujeres, an annual gathering where women discuss issues that affect them. This year’s event took place in October and ended with a march against hate crimes toward transgender people. More than 60,000 people walked through the streets of Buenos Aires, Argentina’s capital.

Without inclusive labor laws and policies, transgender people will continue to have a hard time finding jobs, says Alba Rueda, a member of Mujeres Trans Argentina, an organization that fights for the rights of trans people.

“From 2015 to date, they haven’t created policies that allow [the government] to bring trans women out of exclusion,” Rueda says.

She says she has suffered discrimination while looking for work.

“When I arrived at interviews, it didn’t matter if I had a university degree,” she explains. “They looked at me, and they told me no.”

Some people say hope is not lost just because the law has not gone into effect.

When the law was approved, universities and municipalities started hiring some trans people, says Say Sacayán, leader of Movimiento Antidiscriminatorio de Liberación, an organization working to end discrimination against transgender persons. Sacayán is also the brother of Diana Sacayán, a trans activist who was murdered in 2015.

“There are municipalities that adhere to [the law], and even if they don’t meet the 1 percent, they make three positions available that, although it’s not much, are very important for those who continue working as prostitutes on the street,” Sacayán says.

Francisco Quiñones, director of Bachillerato Popular Trans Mocha Celis, the school where Escobar works, says six transgender people work at the institution and many more attend classes daily. The school has an employment program that allows their students to get jobs with companies in the area. Quiñones says he’s seeing more and more job offers from different companies for their transgender students.

But there’s one problem.

“The salaries that they offer are very low and getting worse all the time,” he says. “Many colleagues get work, but they have to continue prostituting in order to make it to the end of the month.”

Others take these low-paying jobs for the health benefits. Quiñones says transgender people can sometimes receive hormonal treatments or sex change operations at private hospitals, thanks to the medical insurance that they get with these jobs. While there are laws that make it possible for transgender people to seek the same treatment in public hospitals, many have to wait to be treated, Quiñones says. Bureaucracy and discrimination can make the wait last up to five years.

Before the government can address the inequalities in pay, there must be enough jobs for members of the transgender community, Rueda says.

“It’s because of a lack of work opportunities that we need access to employment to be a national policy,” she says.

Her organization and about 20 others have drafted a trans labor quota bill and submitted it in August to Cámara de Diputados, the chamber of deputies. The bill would apply nationwide, Rueda says. It states that transgender people and transvestites must make up at least 1.5 percent of public sector workers. It also states that transgender, transexual and transvestite Argentines must receive training to help them start their own businesses.

Authorities have yet to give feedback on the proposed law.