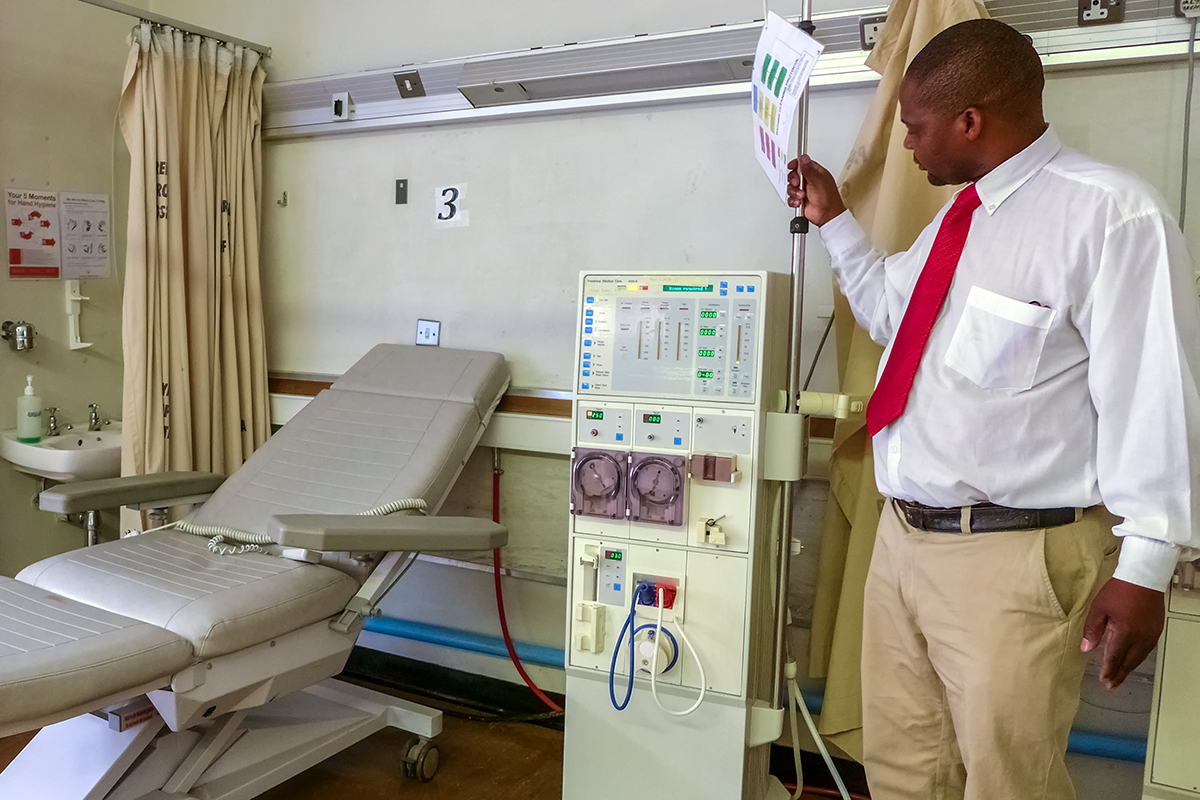 Two years later, her condition had deteriorated, and doctors told her to increase her dialysis frequency to three times per week. People with kidney problems often seek dialysis to ensure that toxins are removed from their blood. That’s a function that healthy kidneys perform naturally.

Each time Mutasa went in for dialysis, she had to pay for the service herself, in cash.

“Sometimes I failed to raise the money,” Mutasa says. “If you go there inconsistently, your condition gets worse.”

Eventually, she says, her health failed to the point that she couldn’t even go to the dressmaking shop where she worked.

Mutasa is 39 years old, with two children. She had no idea how she would get the medical care she needed – until August.

That’s when the Zimbabwean government scrapped renal dialysis fees for those without health insurance or aid at all government health institutions.

“When we were still paying, a lot of the people I knew and received treatment with died regularly because of lack of treatment, which was too expensive,” Mutasa says.

The policy has been a literal lifesaver for many Zimbabweans who need dialysis, but staff at government health institutions say they can’t manage the influx of patients, despite a health levy fund from a tax on mobile airtime and data use.

Linos Dhire, a public relations officer at Parirenyatwa Hospital, told GPJ that the fund is worth $1.5 million. GPJ could not independently verify that amount.

Nyasha Masuka, CEO of Harare Central Hospital, says the number of patients who need regular dialysis has gone from 11 to 15 since August, but the hospital only has four functional dialysis machines. It needs a dozen machines to serve those patients, he says.

“Nurses are overworked,” Masuka says, adding that some leave the hospital at 11 p.m. and return at 7:30 a.m. the next day.

The policy is only feasible if the government provides resources, he says.

When we were still paying, a lot of the people I knew and received treatment with died regularly because of lack of treatment, which was too expensive.Lorraine Mutasa, who now receives free dialysis at a public hospital

The change is one of a handful that have been rolled out under President Emmerson Mnangagwa, who took office in November 2017, after pushing out longtime leader Robert Mugabe. (Mnangagwa was elected president in July 2018.) For example, maternity fees at government hospitals have been waived. These policies come as Zimbabwe’s economy strains to avoid total collapse. The value of government bond notes fluctuates wildly, which emboldens black market trade of foreign currency. Food prices are high, and U.S. dollars, the preferred currency, are scarce. Doctors have complained for months about shortages of key drugs. (Read our story about Zimbabwe’s insulin shortage here.)

People who have the means to pay for dialysis say patients seeking the procedure for free have affected everyone’s access to treatment.

Mbaraso Mutara was diagnosed with renal failure in 2016. Since then, he’s had two dialysis sessions each week at Parirenyatwa Hospital. He uses medical aid to help pay for his sessions, but he still forks over $1,600 each month for the treatment. (The new policy only applies to people who paid for treatments fully out of pocket at public hospitals, not those who receive some form of medical aid.)

There are so many people at the hospital seeking dialysis, Mutara says, that he has to wait hours before getting the treatment he needs.
It was good to scrap the dialysis fees, he says, but now hospitals don’t have enough staff to meet the need.

Medical staff at the hospitals GPJ visited were reluctant to comment, but Dhire, the Parirenyatwa Hospital public relations officer, confirmed that more patients have come for dialysis since the government enacted the policy.

“The hospital is doing everything in its capacity to cater for the increasing number of patients, despite staff challenges, as there are few renal nurses,” Dhire says.

Mutasa, the mother on dialysis, acknowledges that while she’s happy that she no longer has to scrape together money for treatment, there have still been some obstacles since August. Some days, she says, she waits for hours before giving up and heading home.

“You have to return the following day because there will be so many people and so few staff and machines,” Mutasa says.