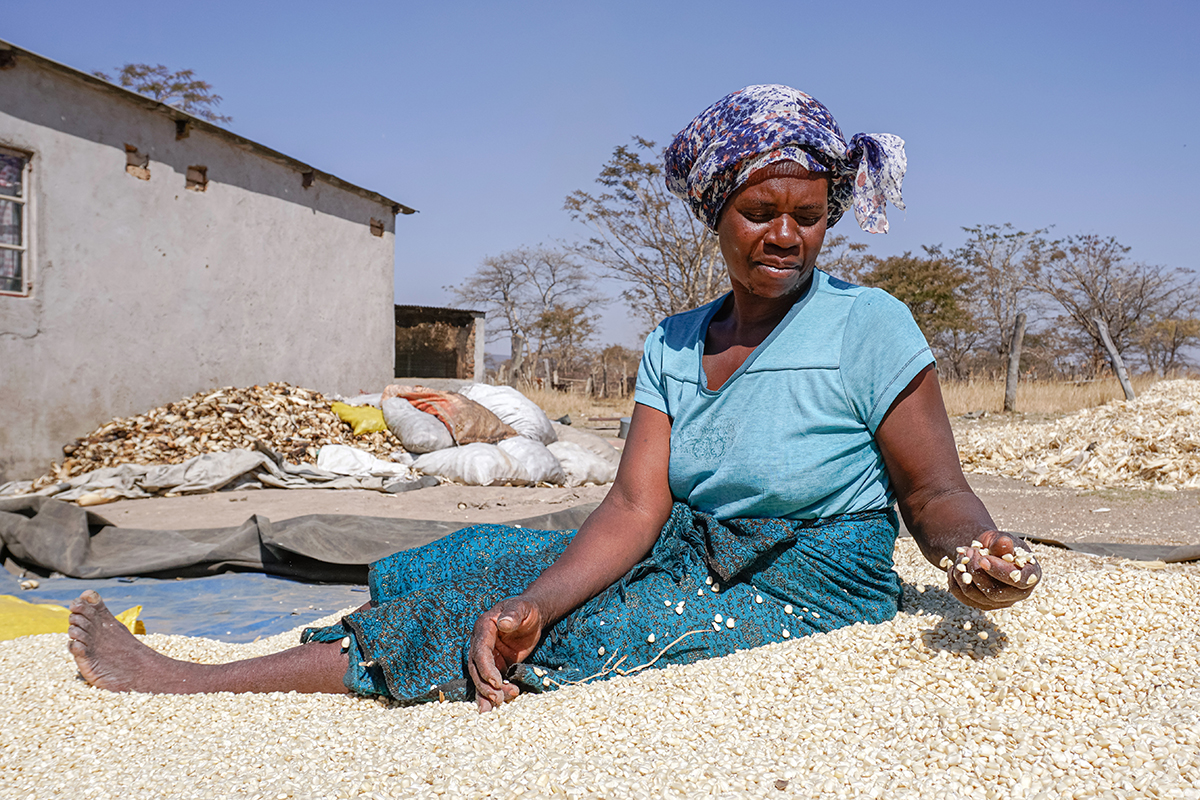 HARARE, ZIMBABWE — When the government here announced a policy requiring farmers to sell their grain only to the state-owned Grain Marketing Board at a fixed price, Beauty Sandukwa dutifully delivered her maize.

Sandukwa has worked the land for nearly 20 years. This year, she harvested 42 metric tons of maize from 20 hectares.

But she says the government didn’t keep its end of the bargain.

“It’s been four weeks now, but I have not been paid,” she says.

The new policy isn’t the only thing causing Sandukwa’s instability. In 2015, she says she signed up to receive farming supplies through a program called Command Agriculture, which first launched that same year. Under that program, the government dictates the types and volume of crops a farmer will produce, as well as the price at which they will be sold. In exchange, the farmer receives supplies, including seeds and fertilizer.

The government said that the program would help replace imported maize with domestic maize. But farmers told GPJ in 2017 that the promised supplies were delivered late, or not at all. 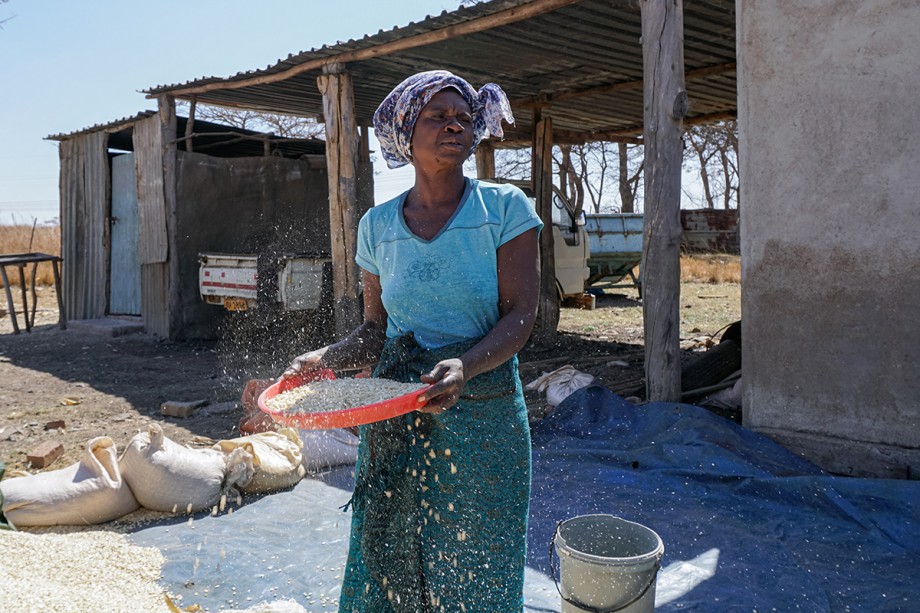 Sandukwa winnows her maize crop. She has had to buy fertilizer and other supplies herself, even though the government was supposed to supply them through the Command Agriculture program.

Sandukwa says she received 1 metric ton of fertilizer through the Command Agriculture program, the cost of which will be deducted when she sells her maize to the Grain Marketing Board. The problem, she says, is that she doesn’t know what that amount will be.

When she needed additional fertilizer and supplies, she says, the government couldn’t provide them. Now, she buys them herself.

“l ended up selling one of my cows to cover the costs,” she says.

Rockie Mutenha, the general manager for the Grain Marketing Board, says the regulation is meant to keep maize from being smuggled to other countries, as well as to protect farmers from unscrupulous buyers.

The Grain Marketing Board will use the maize to ensure the nation’s food security, Mutenha says.

For farmers, though, the regulation makes growing maize unaffordable. Seeds, fertilizer and other supplies were purchased using U.S. dollars, which was the gold standard currency in Zimbabwe when the growing season began. But the Zimbabwean government has since issued its own currency, which swings wildly in value.

But that’s not adequate, says Antoinette Chigwe, the chief economist at Commercial Farmers Union, a major farmers’ organization. If the government continues to force farmers to sell to the Grain Marketing Board, many will likely abandon farming in upcoming seasons, she says, or break the law.

“They may need to look for more lucrative markets,” Chigwe says.

For Zimbabwean farmers, this regulation is only the latest in a long series of challenges. Before independence, white farmers owned the country’s most fertile farmland. Afterward, the new Zimbabwean government enacted a series of land reforms, including a program called Fast Track Land Reform which gained steam in the early 2000s. That program forcefully turned land over to black Zimbabweans.

Many of the black farmers who were granted land didn’t have the knowledge or money to maintain the farms. The program gave many black Zimbabweans a chance to pursue farming as a livelihood; but ultimately, it has caused a serious food shortage.

But even under Fast Track Land Reform, many farmers don’t own their plots outright. 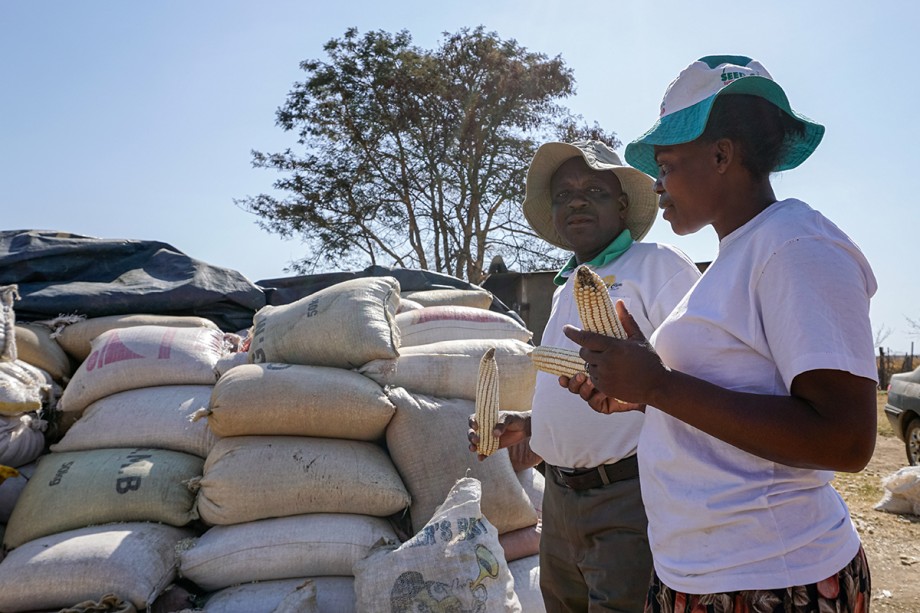 Doubt Chodokufa Nerwande stands next to this year’s maize harvest with his wife, Ndaizivei Mazambara. Nerwande ended up selling a large part of his harvest to individual buyers instead of the government’s Grain Marketing Board. He says their fixed price policy has prevented farmers from making a sustainable livelihood.

In January, farmers told GPJ reporters that some farmland in Zimbabwe is technically owned by the government, but leased out to farmers for 99 years. Data for land use and ownership in Zimbabwe isn’t easily accessible to the public.

“Farmers are left basically asking the government to provide the kind of support that they can’t leverage through property rights,” says Ben Gilpin, the Commercial Farmers Union’s director.

Rishon Musekiwa, a farmer who produces maize and other crops, says he got his farmland through Fast Track Land Reform. He has an offer letter from the government to own the land, but he doesn’t have a title.

Musekiwa doesn’t know whether he’ll make a profit this year when he sells to the Grain Marketing Board. The only way to guarantee an income at all is to break the law, he says.

If an eager maize buyer approaches him, he says, “I will end up selling.”

Doubt Chodokufa Nerwande got his plot through Fast Track Land Reform too. He says he’s sold grain to buyers who approach him individually so that he can buy fuel, which the Command Agriculture program doesn’t provide.

Of the 100 metric tons of maize he harvested this year, he says he’s sold just 34 to the government. Much of the rest has gone to individual buyers.

“Command Agriculture is good,” he says. “The problem is with implementation.”