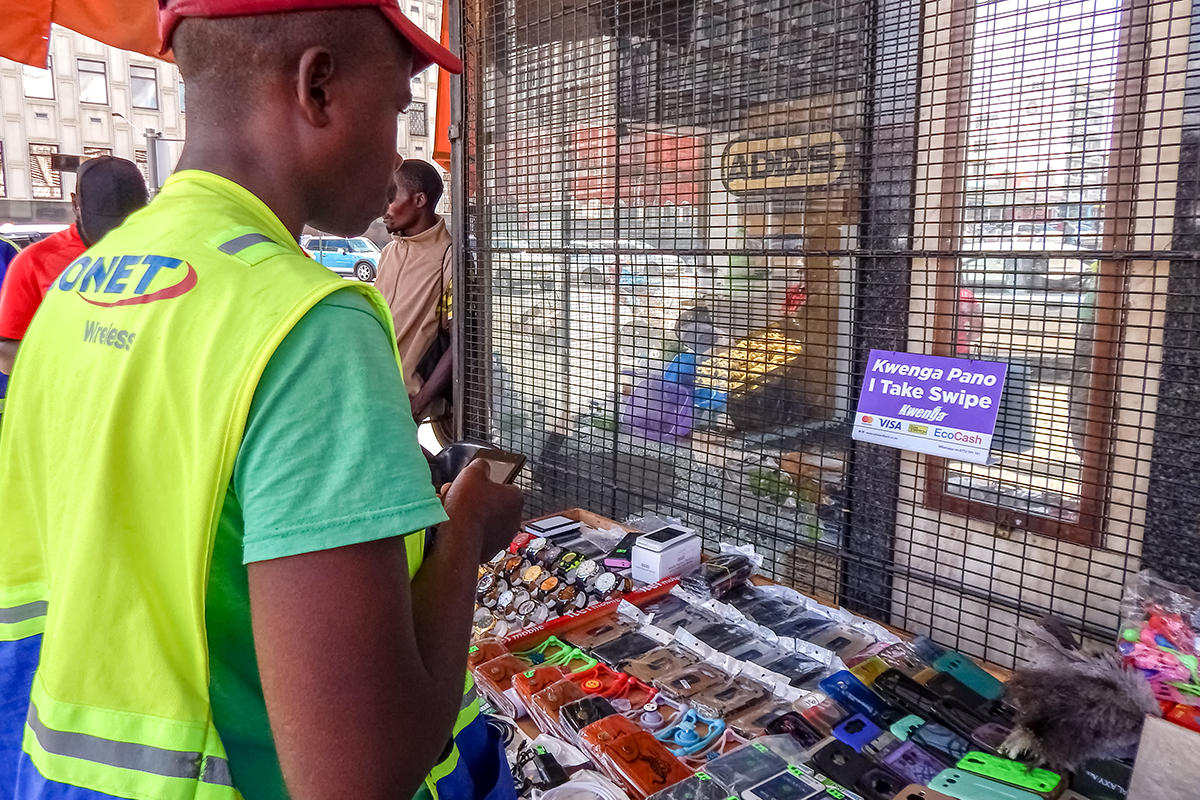 BULAWAYO, ZIMBABWE — Nomalanga Mthethwa moves from one supermarket to another, ferociously browsing each section for a bargain. When she can’t find what she needs, or when some items exceed her budget, she turns to street vendors on the crowded sidewalks of Bulawayo, Zimbabwe’s second-largest city.

Shopping for groceries and household items is time-consuming, she says, but with prices for basic commodities skyrocketing, she has no choice but to spend hours hunting for affordable products.

Street merchants, estimated to be one-third of Zimbabwe’s workforce, are making this task a little easier, she says. Many of them offer low prices on the items on Mthethwa’s shopping list and are willing to reduce those prices depending on whether a customer pays with cash; plastic money, a common local term for debit cards; or mobile money, an electronic remittance service that only requires a mobile phone.

“In some supermarkets, a packet of Maq washing powder costs $8.50,” Mthethwa points out. “With street vendors, Maq costs $4.75 when paying with cash and $5.20 when using mobile money.”

As this pricing system, locally called the multi-tier pricing system, gains popularity with some of Zimbabwe’s consumers and salespeople, others deem it an inconvenience. Zimbabwe’s authorities have issued several statements in the past year, warning vendors to stop using the pricing system, which they say is discriminatory to buyers. But with few signs of improvement in the country’s sputtering economy, some informal traders say ignoring the warnings is the only way to stay in business. 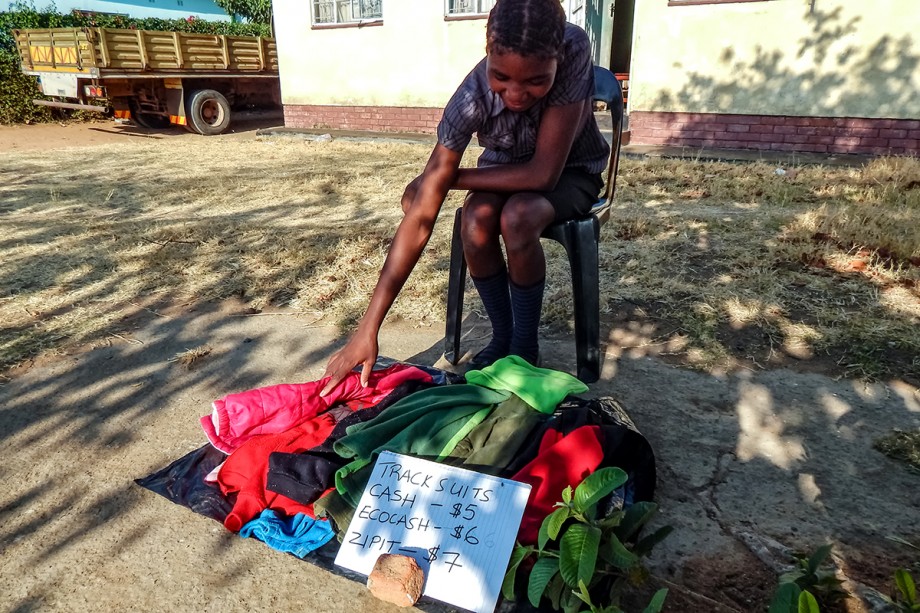 Precious Bhebhe sells children’s clothing outside of her home in Cowdray Park, a suburb of Bulawayo. Bhebhe, who uses the multi-tier pricing system, does not own a debit card reader, so she only accepts cash and mobile money.

Cash availability became even more of a challenge when, on Oct. 1 , a new government policy eliminated U.S. dollars from bank accounts throughout the country and replaced that money with a new monetary unit that some central bank officials say should be called a “local dollar.” While the value of that dollar is still cause for debate, the value of the country’s bond note is fluctuating wildly.

In a February 2018 report, the Reserve Bank of Zimbabwe (RBZ) cites multi-tier pricing as the cause of massive price hikes on goods and services, but informal-sector workers list other reasons, among them the black-market exchange rate, the scarcity of foreign currency and the bank’s most recent efforts to fix the economy. Among the new set of monetary policies announced on Oct. 1, foreign traders are now required to use foreign currency when buying goods in Zimbabwe for sale in neighboring countries.

Ronald Musume, a clothing vendor for the past six years, has been relying on the multi-tier pricing system since the bond note was introduced. Musume says he charges customers $18 for a pair of men’s trousers if they choose to pay with mobile money, and $16 for cash transactions.

“If I do not do that, I run at a loss, because I need to buy foreign currency at a high rate from the black market to go order my goods from South Africa,” he explains while he sorts through his merchandise.

Musume says he’s not sure what penalties he’ll face if authorities catch him using the multi-tier pricing system, because there is no law that prohibits it. Musume also says he hasn’t heard of anyone who has been arrested or fined for what the authorities are calling an offense. Still, some vendors are panicked and have stopped displaying different prices at their stalls, to avoid getting caught by the police, he adds. 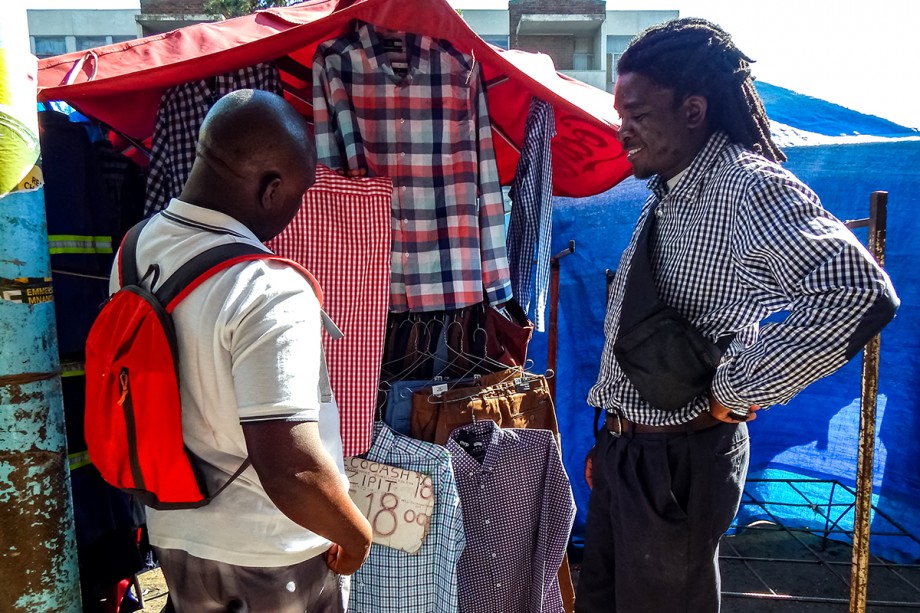 Ronald Musume (right), a street vendor, charges different prices for the clothing items on display, depending on how his customers choose to pay. He says he is not sure whether it is illegal to use what locals call the multi-tier pricing system, but he says Zimbabwe’s economic crisis has left him no choice.

Dumisani Mloyi, who sells accessories along some of the busiest streets in Bulawayo, also uses the multi-tier pricing system. He prefers that customers pay with mobile money, because mobile-money transaction fees are less than debit-card transaction fees, he says. Mloyi, however, accepts cash for items costing $2 or less, he says.

James Runako, a student at Lupane State University and an uncompromising bargain hunter, is a fan of the multi-tier pricing system. Runako doesn’t have a bank account. He says his family sends him a monthly allowance, in U.S. dollars, through MoneyGram, a global money transfer service.

“I then change it to bond notes on the parallel [black] market and do my transactions in cash, making most of my purchases cheaper,” he says.

But Gertrude Dube has a different take on the pricing system. She says it isn’t saving her money.

“I receive my salary through a bank,” says the primary school teacher, who’s lost confidence in the country’s economy. “So, I am forced to use my swipe [debit] card at all times for most purchases.”

Those who use cash often pay the lowest amount for basic commodities, she adds. Dube says she can only withdraw 50 bond notes from the ATM each week, and she uses the cash for commuting. Most public-transport operators accept only cash.

Victor Tinashe Bhoroma, a business analyst, says the pricing system discriminates against potential buyers such as Dube, especially since cash is hard to come by. But Musume feels that most of his customers don’t mind it.